Meanwhile, in NJ first rain in several weeks (accompanied by lightning). Tomorrow brings temps back into the 90's
•••

In the sun in the back garden earlier it read 41degC as the UK heatwave today and tomorrow should hit over 40degC shade air temp later this afternoon and even hotter tomorrow. Crossing the supermarket carpark was like being blown by a hair drier.

Yep, my car was showing 38 deg. C outside temp driving to my hospital appointment in Cambridge, UK. Probably be even hotter going home, good job my air con works!
•••
R

Death Valley temps there. Good luck UK and W Europe. I do not remember it ever getting ~40C, in Ontario, maybe 38C in Toronto downtown but out in the sticks here, I hope not
Finally a day of rain after a stellar week of sun and not too hot humid. Its been a really nice summer so far. Looks like a week of much needed on/off rain, farmers will be dancing, I get a break from watering vegs, bring on more beans and other veggies, tomatoes are getting close. I see the thrushes enjoying it looking for worms.
•••

Now there's a big fire near Lytton BC again. The town burned down the day after a record 49.6°C temperature last year.
•••
F

I think it was last year that I could smell the smoke from a Canadian wildfire in my neck of the woods. For a few days I could even smell it in the house with the AC on.

The heat and fires are really terrible. We could be looking at big changes here. Places like California have natural chaparral (and it's dangerous to live near it), but repeated wildfires in central Canada and Spain could change the ecosystem.

Where I am we're doing good so far. This region is well suited to weathering climate change. We have lots of water, and the lake moderates our weather (except for that "lake effect" snow).
•••

Yeah - blistering in Norfolk as well. Got to 39 C according to the outside air temp monitor in my car yesterday. I’d be very surprised the official UK record of 38.6 (IIRC) isn’t broken today.

Spare a thought for the folks in France, Spain and Portugal - 45C plus. Unprecedented.
Reactions: 1 users
••• 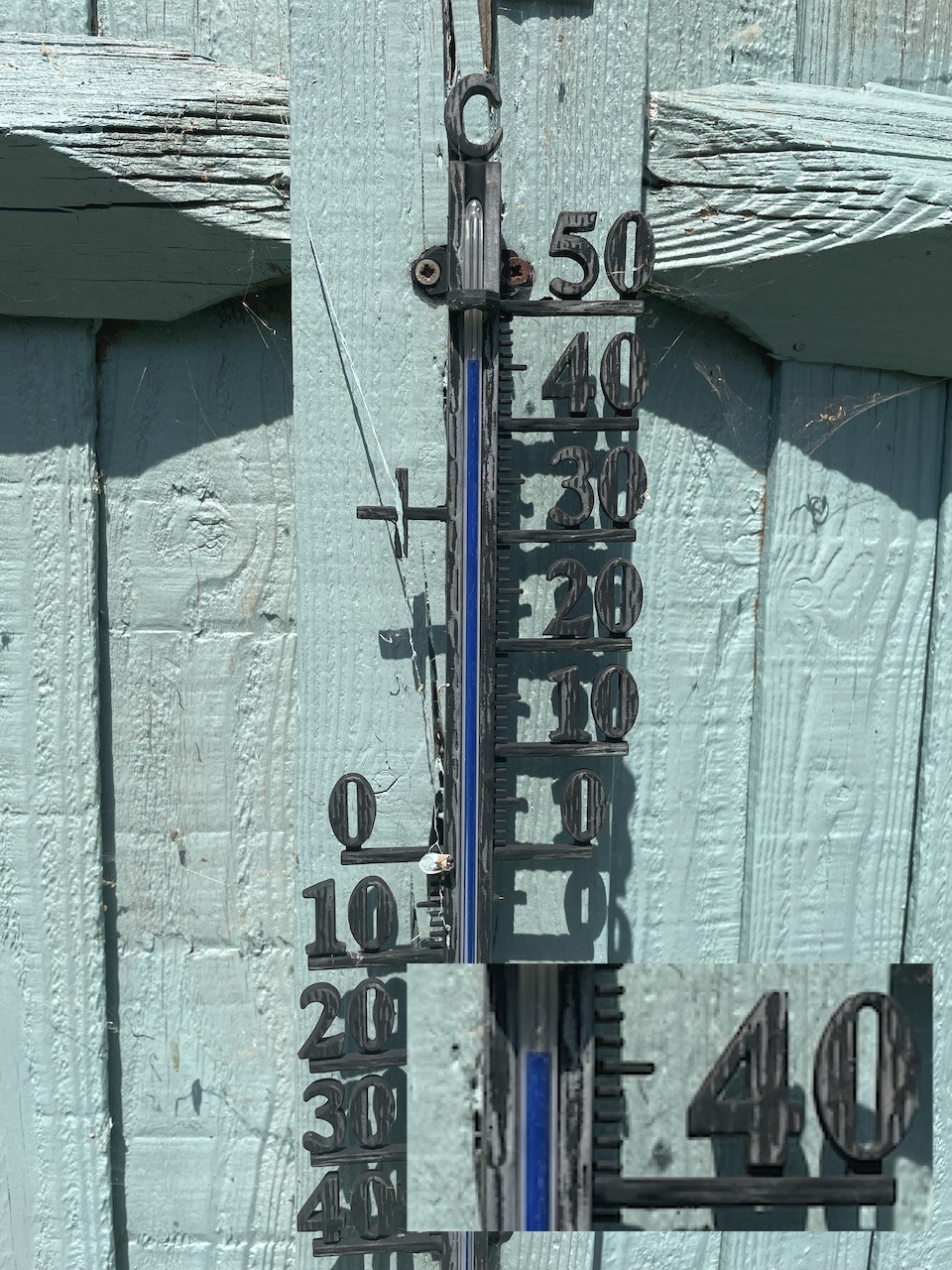 Shade is high 30 and the conservatory is 42degC in the shade with the windows open. Luckily the living room is 27degC.

No point in showing in the sun shots.
•••

I have always used water to cool. Whether it’s a plant mister, a pet tub to dunk your feet, an inflatable dinghy to fill and sit in, or a bathtub, you fill in the morning and jump into upon your return. They all work when used correctly. Just remember that 20 degree tap water is nerve shattering cold when it 40 degrees out and that it takes a very long time for a tub of that water to reach ambient temperature. Sure you have things to do but cooling your core by 1 or 2 degrees is incredible. No better or faster way, than submersion. A cold shower is not very effective.
•••

35 C in Carlisle, England today.
Around 40 degree's around London. A record.
Back to 20 degree's in Carlisle tomorrow, English weather up and down.
Reactions: 1 users
•••

People always give Carlisle a bad rap. Was there a few months ago - absolutely beautiful old town

Bonsai said:
People always give Carlisle a bad rap. Was there a few months ago - absolutely beautiful old town

The people are like most places, some good and some bad.
The city centre can get a bit rough at the weekends.

I had trouble when I first moved in. Some kids were playing football against my fence and broke it so I asked them to not play against the fence.
Next thing I know 30 kids are firing stones at my property.
Next day the fence was uprooted and thrown into the road.
Turns out it was just two brothers who were the problem.
They thought it was ok to ride a motorcycle under age on the road and ride down the pavements.
So I called the police and the police took their bike away.

I did a gig at a local club. A woman came up and asked for a track I didnt have.
So I apologised saying I couldnt carry every song ever written.
Next thing she is screaming and shouting to everyone that she wanted this track. She just wouldnt let it go.

Did a party at a local pub and the kids just went wild climbing all over my gear and knocking it over.
I asked over the mic for people to remove the kids from the stage as someone might get hurt.
Someone came up and said the parents had all gone into the city centre leaving me to deal with the kids.
I was on my own so party games were out of the question and anyway it was an engagement party not a kids party.

I came out of a junction in my car and was a good distance off a van.
Next thing I know he pulled in front of me and got out screaming and blinding.
I just ignored him and he eventually cooled down.

There are quite a few people with attitude problem's, I try to avoid them.
•••

Temps have dropped but I wasn't impressed - we only had a couple of cracks of thunder, a small splatter of rain and no fork lightning. I R Disappoint (if you excuse the internetism).
•••
T

There was a thunderstorm last night, it rained for about 5 minutes. We went and stood out in the garden until the rain stopped. Bliss......
•••

tobydog said:
There was a thunderstorm last night, it rained for about 5 minutes. We went and stood out in the garden until the rain stopped. Bliss......
Click to expand...