I totally don't have a clue of what is V6, V7 to be fully honest.
I just referred to XP-32 because the output impedance catches my interest and drove me to built this module.
In my case, I just use plain ZVN/ZVP mosfets which I paired for VGS. I also used 2sk170/2sj74.
So does it sound good, to my ears definitely yes. Does it measure good, I let you judge.
Measured with RME ADI-2 PRO FS with a 10K resistive load in fully balance mode, output level is 4Vrms: 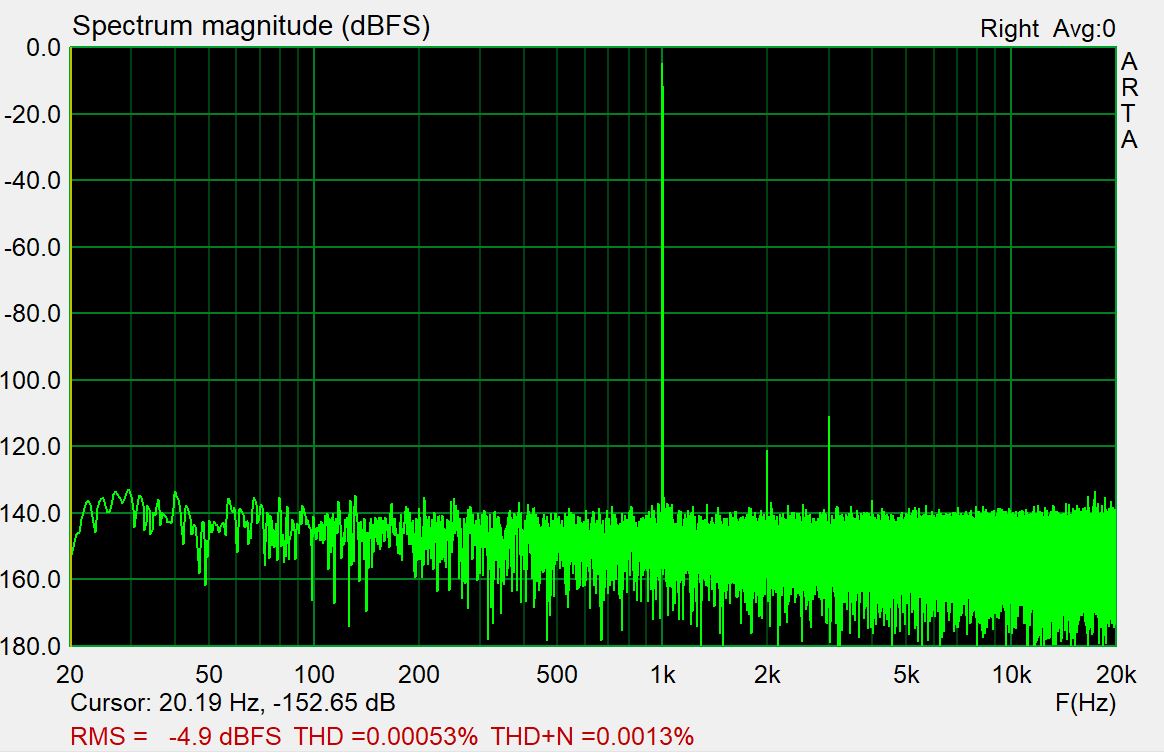 shonne said:
As I know in Pass XP-32 is ugs V7 with toshiba mosfets.
Click to expand...

starcat said:
No, gionad not responding. I have done them myself and ordered yesterday.
So sad that this thread is pretty much dead. I guess I am late with my build.
Click to expand...

Hey Pars, you are still building it and not finished yet?
I am still waiting for some parts, finished probably 90% but except for the PSU nothing is really complete.
•••

Building 2 actually, but haven't been working on them. Other stuff to get done. I have the processor boards done, just need to update firmware.
Reactions: 1 user
•••

i have a full set of pcb listed in the marketplace

Having a bit of spare time in the last period I decided to take my chances and learn how to draw a pcb in altium. To be honest it wasn’t so difficult as I imagined initially, but when one is LAZY it finds all kind of excuses(that one being me).
Going slowly ahead I designed the pcb for the new gain stage of my preamp.
Now that I had the pcb drawn I needed to simulate the schematic to see if it works to be sure I won’t blow up something.
There was a person that encouraged me to learn ltspice and I don’t regret a sec that I followed his suggestion because the design oscillated around 1mhz and I once again want to give him a big thanks!
Seeing that soon enough I corrected the schematics and also pcbs.
All the learning process took me close to 1 month, with this I mean the time from when I placed the first component in the altium schematic and until I ordered the pcbs.
Maybe for a lot of you here this is old stuff but for me it was like discovering America
Today I received the pcbs and the next period I will try to solder them.
I have already all the parts ordered and in house.
It will be a bit difficult process because the last week the ssd on my pc died and I lost all the data so I have to go by memory, I know… bad luck but this is life.
Being lazy as I am I don’t have the will to draw everything again.
If I remember correctly for a gain of 3x(1v in/3v out) balanced I got something like 0.00008% thd, for se it was something like 0.006% this into a 10k resistive load.

can’t wait to hear it!

edit: these pcbs(left and right) are designed to be plugged in on the preamp main pcbs.

For now I finished with the soldering.
I have a few shunt regs on each pcb, the gain stage being a cascoded bba3 so even with the lost schematics it wasn’t so hard to put together.

finwbu said:
If someone need some Toshiba Fets Toshiba Dual 2SJ109BL & 2SK389BL for the UGS Preamp ge can contact me via PM. I have still enough original Toshibas.
Click to expand...

Continuing my journey with the ugs I managed to start one channel.
Using the 2.2k input filter I get 10db gain.
In the test I fed 1v and got 3v.

Unfortunately the muses chip on the second channel is dead so I can’t do any testing.

Is there someone having 2 muses chips that is willing to sell?

If anyone could help me with those last missing parts, it would be great and highly appreciated!