Introduction to designing crossovers without measurement

This is the raw response measured in-cabinet at 1m for the tweeter and woofer. The data has a 4ms gate and is not smoothed and should be good to 250Hz. The tweeter has a 22uF cap on it. The woofer is full range. The port is plugged.

I believe cutting off the woofer sooner means increasing the inductor value, which does lower the 1-2KHz range hump, but also lowers the valley at 700 Hz to the 65 dB level. This value in the crossover splits difference of the dip and hump at 700 Hz and 1000-2000Hz.

I was talking about the capacitor.

Now to find the range for the crossover. Where should the woofer be cut, where is its breakup?

These are cheap chinese drivers, the tweeter 1" mylar and the woofer 4" paper cone and stamped basket. I did take measurements using REW and UMIK-1. These are the frd and zma files. The zipped files are txt needing an frd extension. The unzipped txt files are really zma files, system prohibited me uploading them with that extension for some reason.

I don't have much confidence in those files. It might help to explain why the crossover seems difficult to achieve on the simulator.
•••
K

Ok, I figured out how to correct the issue with REW creating frd files other programs can't work with, so here are the frd and zma files for the Dayton ND20TA-6 tweeter and stock woofer for this speaker. The tweeter phase looks a little funny, but I went ahead and used XSim to create what appears to the untrained eye, an acceptable crossover, hopefully better than a 2.2uF cap on the tweeter. The values in this simulation are what I have on hand and should be able to get it in tomorrow to see how it measures and sounds.

I cannot see tweeter phase on your screenshot. Try turning on the individual drivers, add phase to the plot, remove system phase, push them up the scale and spread out a little vertically.
•••
K

Hopefully, this satisfies your request. There are two choices to display phase in XSim from S1 and S1 Drive Only for the tweeter. Not sure what the difference is. Provided both. What do these plots tell us? Thanks!

I have not measured z offset yet, so this crossover does not account for it.

If you could post your *.dxo file (save the Xsim crossover and attach it), I will explain why this is helpful.
•••
K

This is how it might look after post #929. You ask what driver only is, you can see the before and after crossover at the same time. You ask what the plots tell us, can you be more specific or do you mean in general?

Hi, are there any sections on this thread that give guidance on how to do a low-pass and high-pass filter for the midrange in a 3-way? When I play around in WinPCd, it's not so easy to get a clean curve for the midrange vs a single low-pass like in a 2-way, cause the component values for one leg seem to affect the response from back to front.
•••

Could you post the frd file for the mid.

What response are you looking for and what do you mean from front to back?
•••
M

Thanks, Allen! I'm a novice; just exploring filter creation using an Audax driver using the instructions in the woofer and tweeter posts, but got stumped when trying to do a midrange filter.

Here is the datasheet, the FRD traced from it, and the ZMA

The best I could do 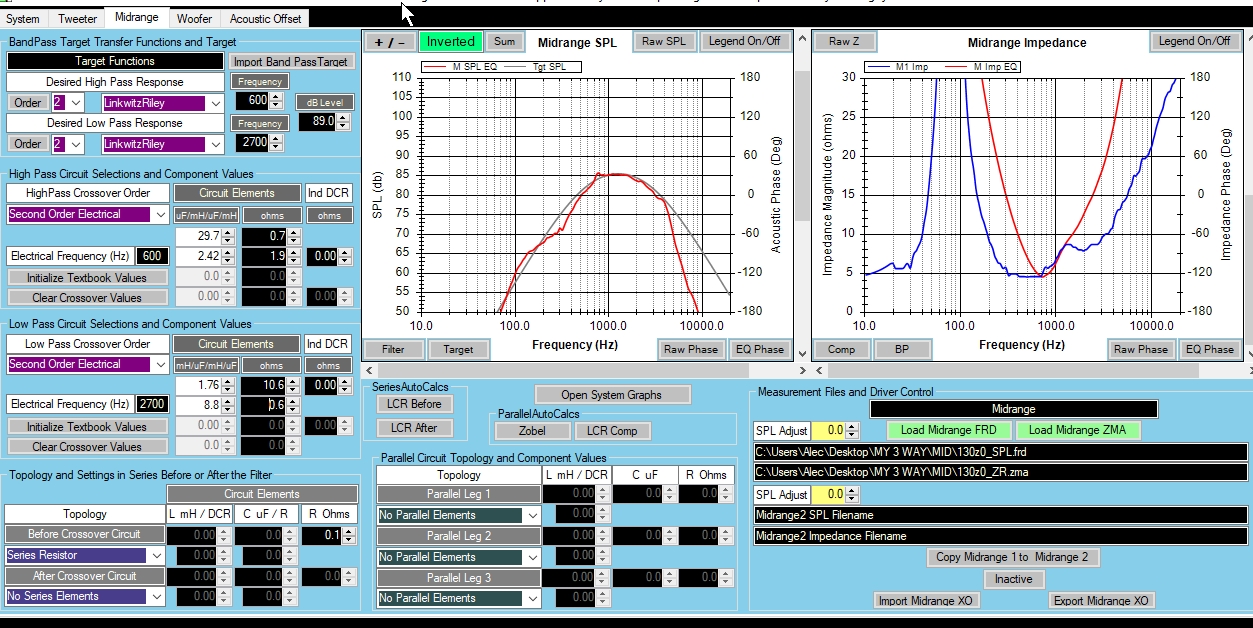 so far - the frustrating thing is when one filter looks good, it gets mangled when I adjust values of the components in the other filter, e.g. the low pass inductor moves the whole curve, so it ends up a random button mashing cause I don't understand how things are really working.

While I have you, is it even necessary to completely model a target curve as far as one could, or is it only important to trace the part of a curve near the crossover frequency itself? Thanks!
Last edited: 2021-09-22 5:05 am
•••

Tracing the whole curve can help because the other part of crossing is the overall balance.. you need to be sure the response around the crossover is at the right level compared to everything else.

You may also want to tilt the whole response slightly. You may also need to make a judgement regarding the baffle step, to make sure you include those extra dBs (up to 6).

Of course the traced responses also don't include the effect of the box resonance on the bass, however you can typically make a guess there when trying to visualise the overall balance.

Ok, the first thing I want to say is about the resistances marked next to the capacitors and inductors. If you don't plan to have resistors right next to these components then you should leave them at their default values (less than 0.1 for capacitors and between approximately 0.2 and 1 for inductors).

The next thing is the bump at 4kHz. This is a breakup mode, it is only an issue directly in front of the speaker. Either toe the speaker (turn it a few degrees) or cross faster or lower. However if you still need it gone, add a notch filter.

How does this look?

AllenB said:
This is how it might look after post #929. You ask what driver only is, you can see the before and after crossover at the same time. You ask what the plots tell us, can you be more specific or do you mean in general?
Click to expand...

I'll answer these one at a time..

See the attachment, you can load a circuit block. When you tune it you can set the frequency and Q factor (0.5=LinkwitzRiley). This is a starting point and needs tuning with a real driver.

You can create an extra blank (default) driver and put these blocks on it to make it a target curve.