Suswashier said:
I am probably missing the point here.

But what is wrong with the approach I suggest here.
(I don’t see what’s wrong, but it is so simple there must be something wrong with it.
Click to expand...

There is nothing wrong with it, it provides tangential tracking. You just need to add an antiskating device.
•••
B

Suswashier said:
I am probably missing the point here.

But what is wrong with the approach I suggest here.
(I don’t see what’s wrong, but it is so simple there must be something wrong with it.

This is one of the many attempts to ensure tangential tracking using fixed centre guide links. Unfortunately the cross member pivots do not follow fixed circular paths as the stylus follows the Thales circle, which it must do for passive tangential alignment. The points attached to the tonearm describe curves named Limacons, which are associated with circles rolling on circles. I don't know how your rear pivot centres and radii are derived but they do not ensure tangential alignment at the stylus.
The first video below illustrates a typical case of the arrangement in your diagrams. The paths of the cross member ends are shown (green and blue) to be limacons, not circles. Adjusting the parameters makes no difference.
Numerous geometries have approximated these limacons by fixed circular paths. A true tangential geometry is shown in the second video.

Bon said:
Unfortunately the cross member pivots do not follow fixed circular paths as the stylus follows the Thales circle, which it must do for passive tangential alignment. The points attached to the tonearm describe curves named Limacons, which are associated with circles rolling on circles. I don't know how your rear pivot centres and radii are derived but they do not ensure tangential alignment at the stylus.
Click to expand...

Following a Thales circle is only one way to construct a tangential tracking tonearm but not the only one.
According to the video the tangential alignment is achieved with at least very good approximation.
•••
B

alighiszem said:
Following a Thales circle is only one way to construct a tangential tracking tonearm but not the only one.
According to the video the tangential alignment is achieved with at least very good approximation.
Click to expand...

Your 1st video is amazing. What kind of software do you use?

Your 1st video is amazing. What kind of software do you use?

I use Desmos parametric graphing. It will not be everyones cup of tea, but is remarkably accurate and flexible. You need to be comfortable with parametric expressions e.g. for straight lines (through a known point, with a known slope, joining 2 points, orthogonal to another line, etc.), circles (with known centre and radius, etc). All parameters can be entered as variable and changed at will by sliders. Graphs can be animated by varying a parameter between fixed values. It can even animate graphs varying more than one parameter simultaneously.
Just be aware that data is held on the Desmos site and is probably in the public domain. So I would not use the software for any commercially sensitive projects. It does not bother me. Mathematics and geometry should be widely shared.

it is indeed an approximation. It has been made experimentally without understanding the math to be honest.

I started out with placing circles in the playable zone of the lp.

Then I draw the tonearm with the two Pivots on both sides.

copied that one and made them tangent to the circles.

took the sides of the pivots and laid them together on a circle.

then I put a Circle on the other pivot. But a circle won’t fit on all pivots. here is the point where the limacon’s would fit (thank you Bon, I learned a whole lot from your explanation)

after that i did a check. The last three pictures are a drawing of how a build system would be .

there you can see that the between second and fourth circle the approximation is accurate enough for my cad system to not notice it. The inner and outer circle are not tangential. I think that those errors are smaller than any tolerances that I can achieve with my building skills . 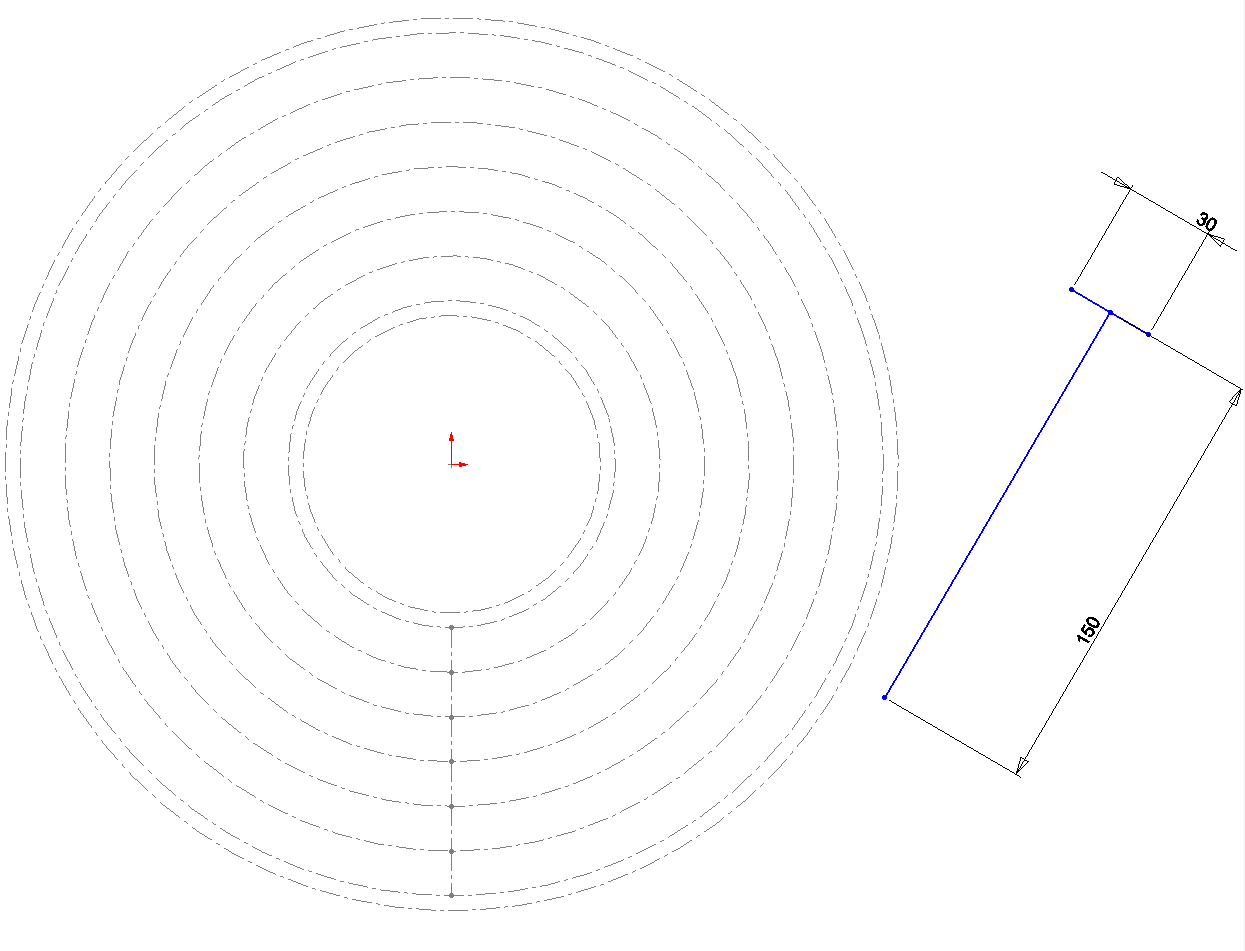 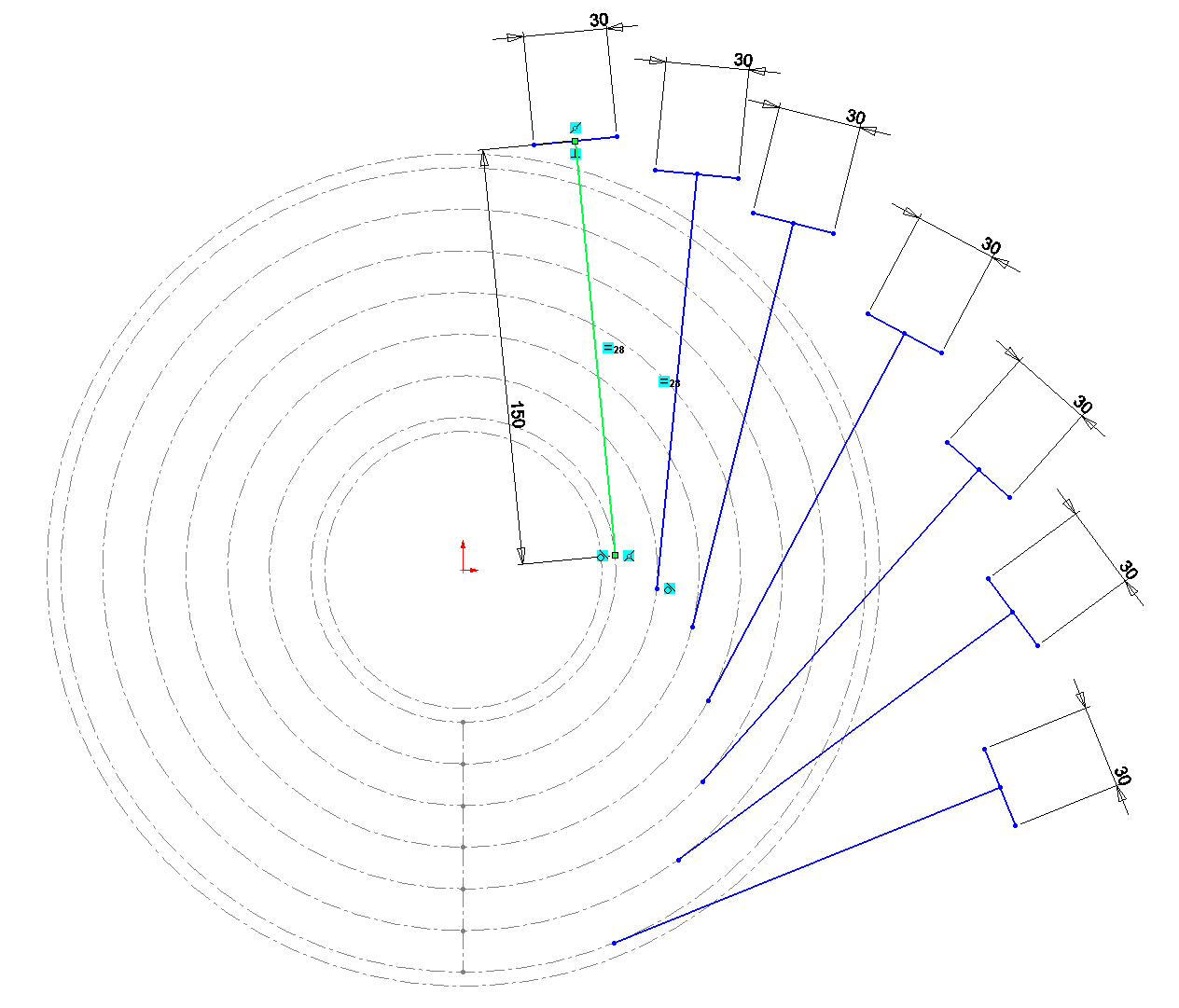 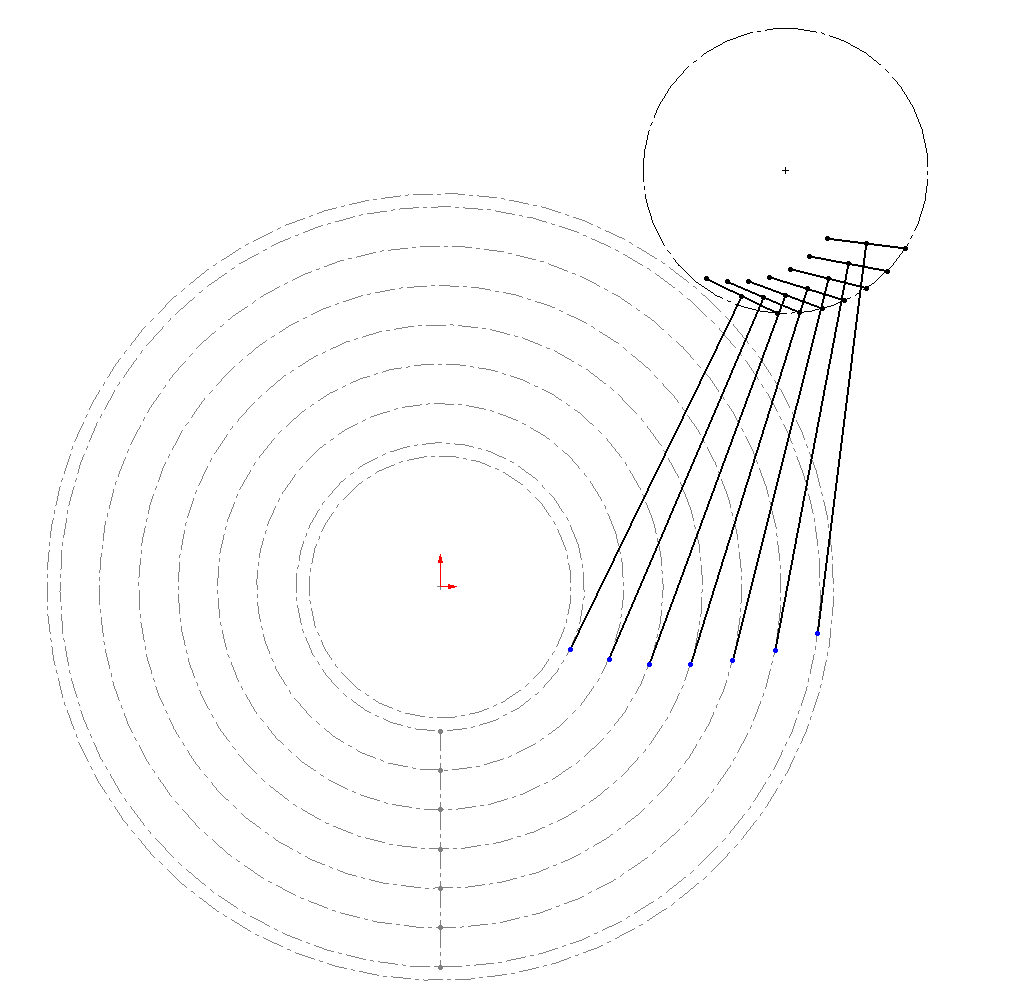 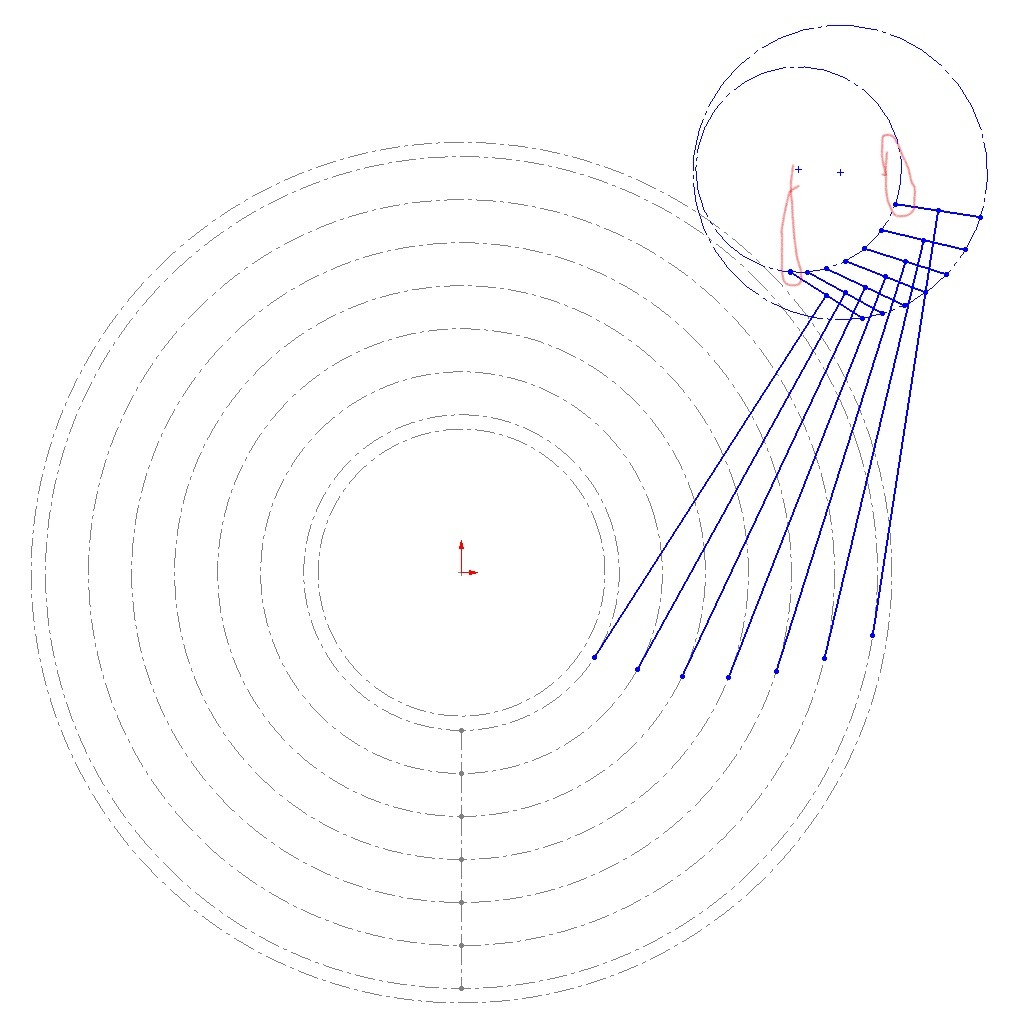 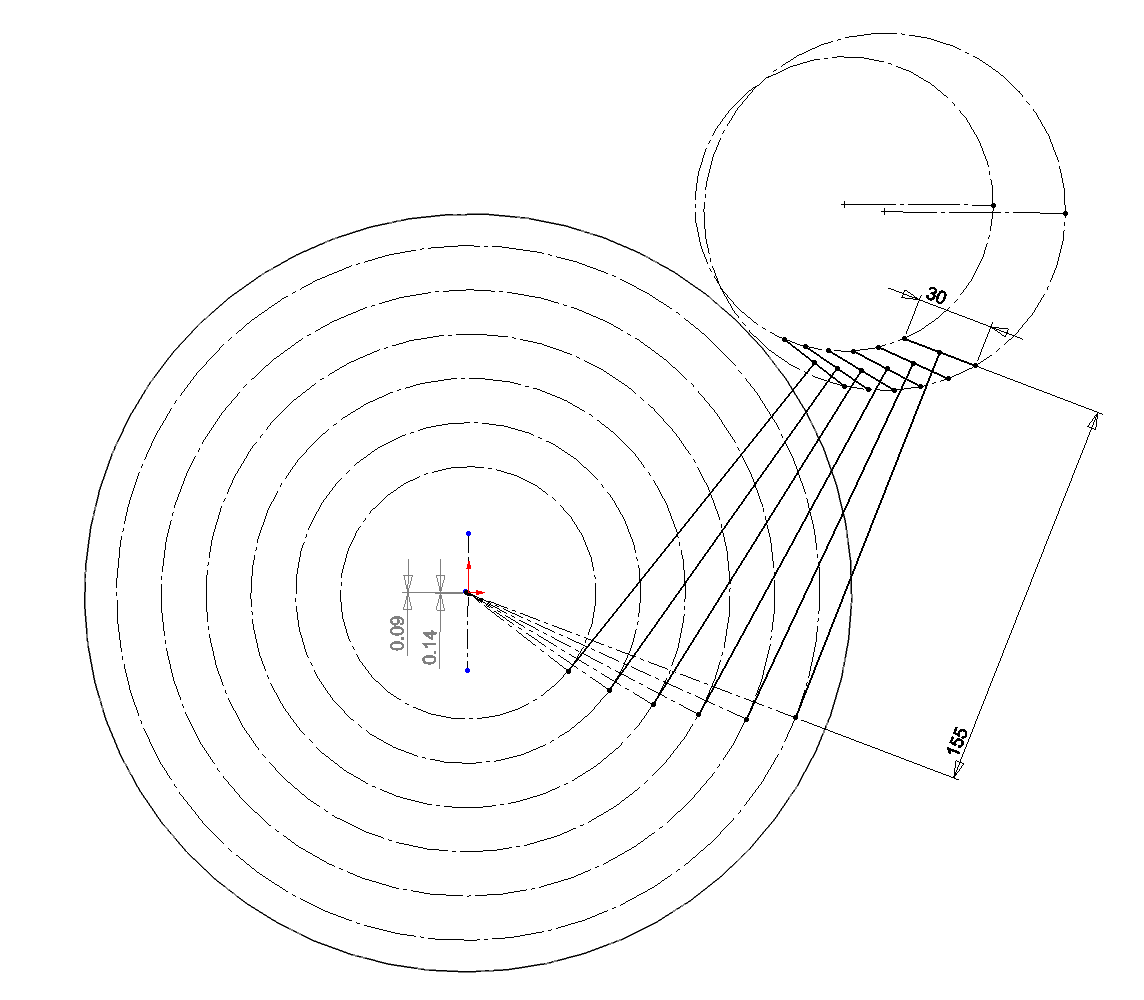 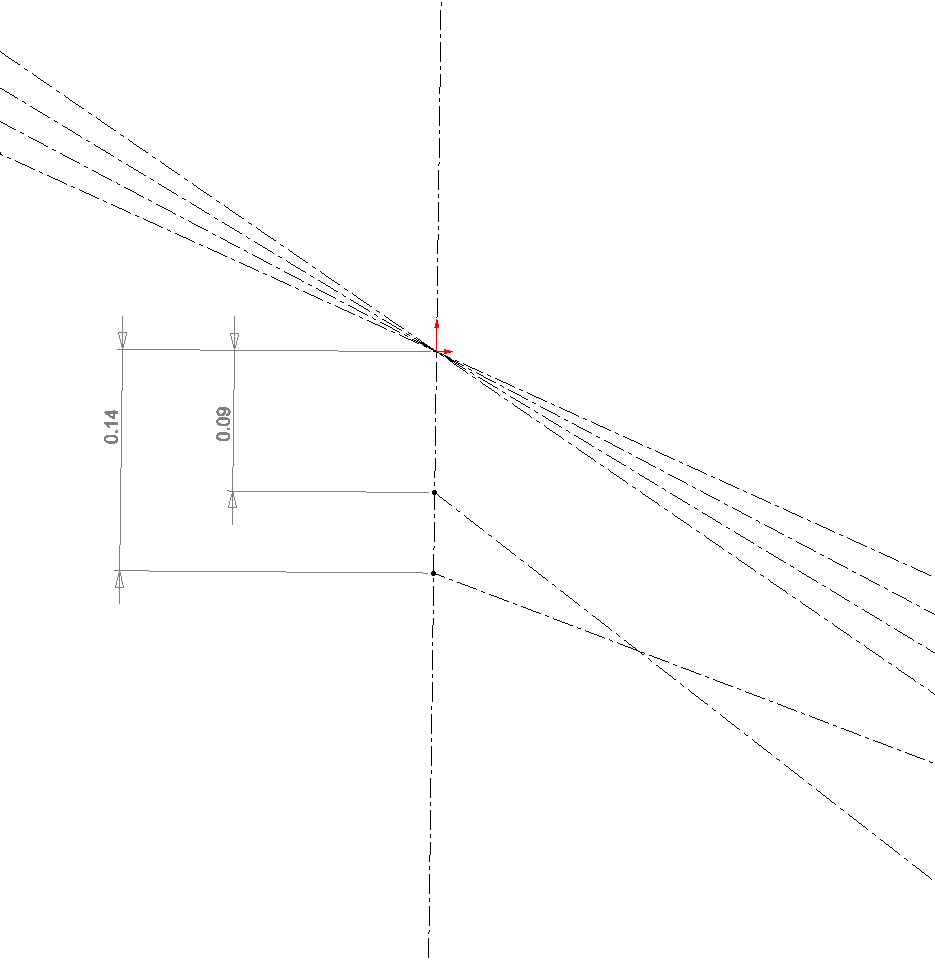 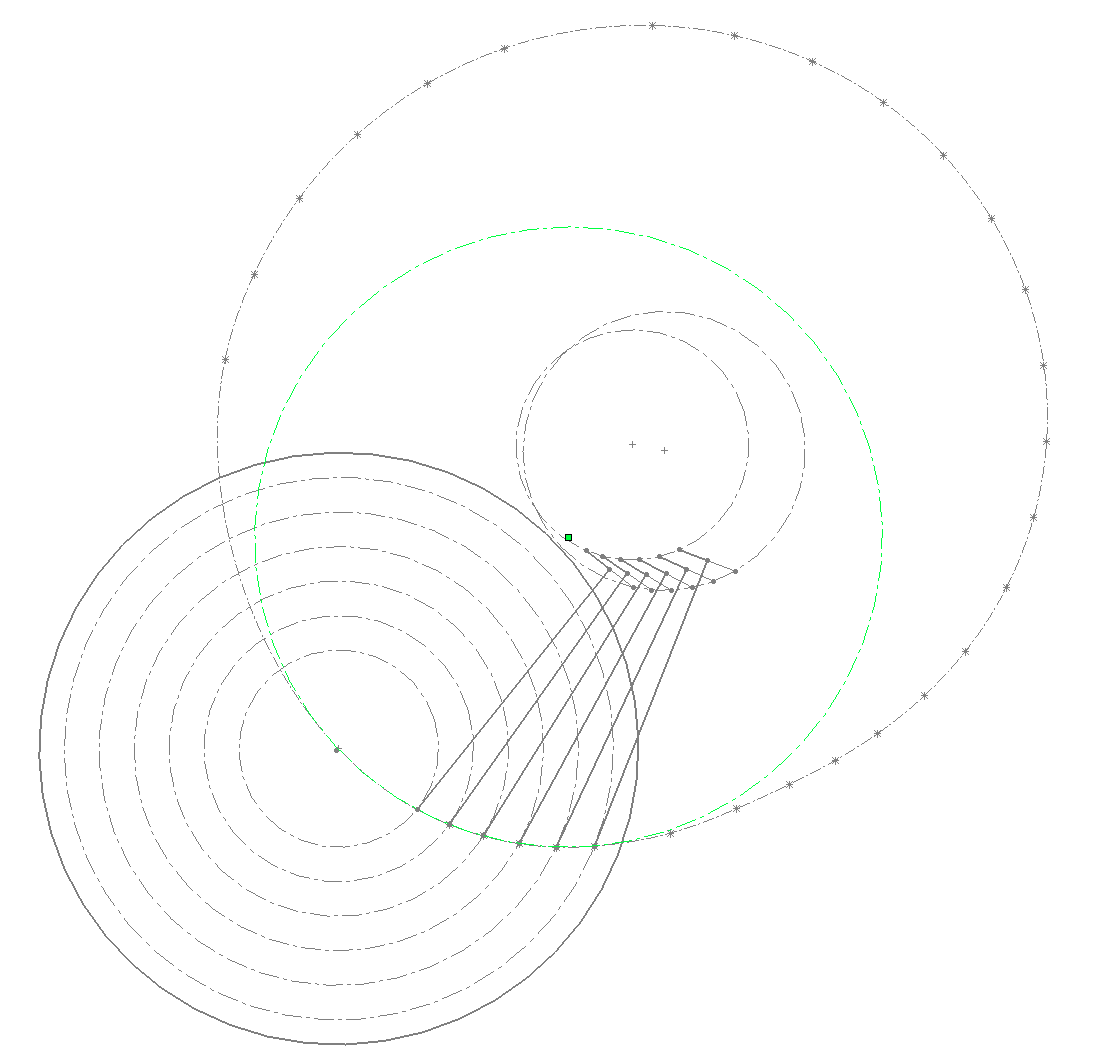 Congratulations for turning geometry into an actual tonearm. There are a couple of technical questions about it, but I think it could work. There are similar vintage arms and Jim (super10018) also has a recent design. Have you added cartridge and listened to it?


According to the website, this product can be a game changer, particularly for parallel tracking. Unfortunately, the price is 600,000 yen ($4,600 USD). Yikes! I think those 6 figure uber turntables should just give out such a device as a freebie!

Besides the Nakamichi turntables, I'm surprised no one else thought of accessories like this. I do know a Frank Schroeder designed turntable had deliberate smaller diameter spindle at the bottom portion to allow room to shift the record for concentricity. Other than that, the so called "high end" world has not spent much time on a device like this except making bigger and heavier and brighter platters. Shouldn't turntable spindles be machined independently from the bearing shaft so they can be swapped out with different diameters and length? 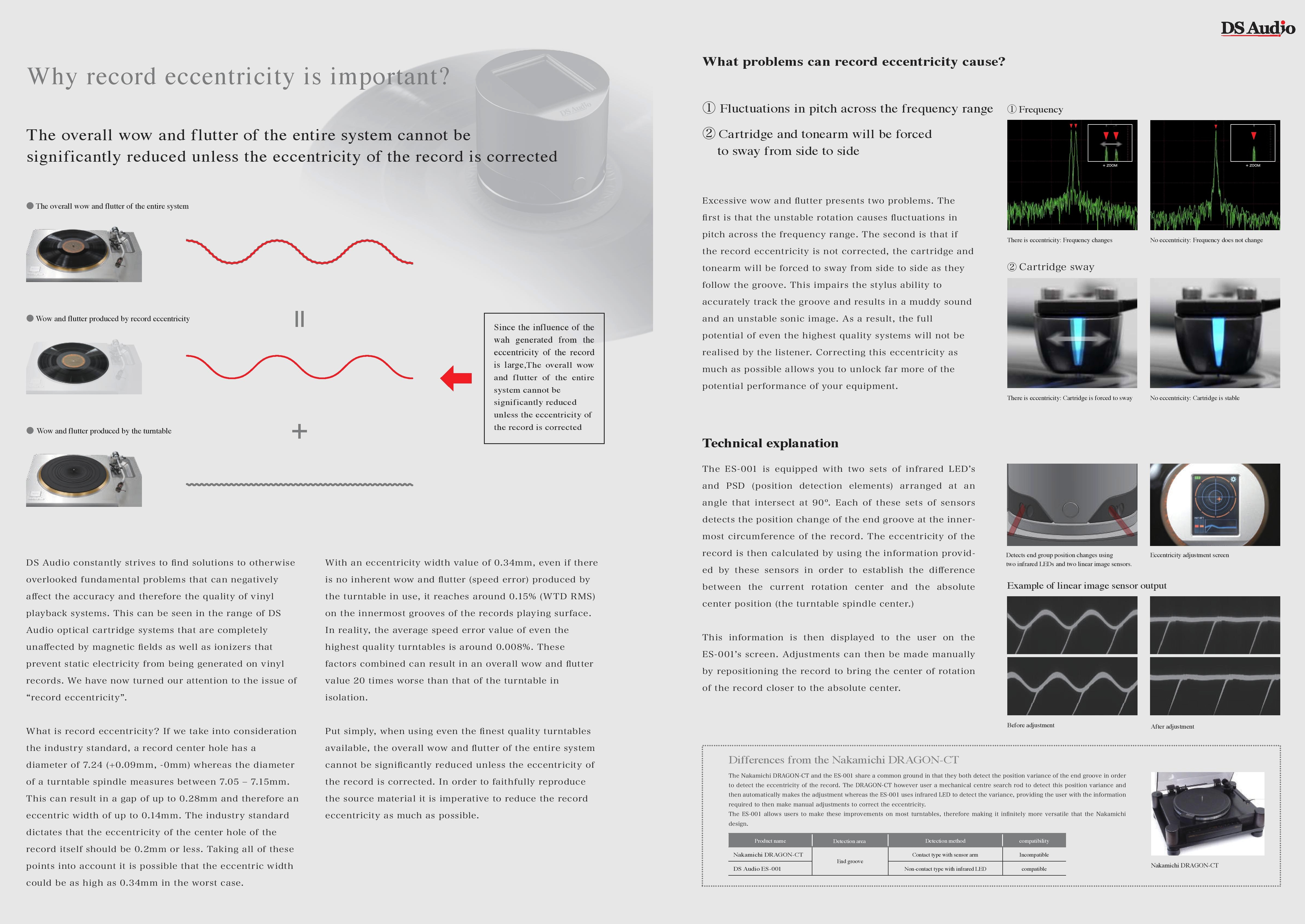 From what I read, it provides a hole enlarging tool or a reamer that allows the user to shift the record to center it based on the detection of run out grove. You physically move the disc to get concentricity. Once you dialed in, the device would tell you it's locked in dead center. Think of it as a Nakamichi turntable but manually adjusting to concentricity. Another way is to sand down the spindle to slightly smaller diameter at the bottom portion so you don't have to enlarge every record holes.

If you look closer, you can tell the hole has been slightly enlarged. I have always wanted the turntable makers to make the spindle independent from the bearing shaft. At least the spindle should be a part of the platter instead of the bearing shaft or subplatter. Even better is to make the spindle detachable like a screw-on device to the PLATTER. Why allow bearing vibrations to be transmitted all the way up to the spindle that touches the actual record? My friend had a P-brand turntable with clamps and every time I clamp the record down to the platter, I could heard the noise from the motor. Unclamped it and the noise was gone. And the incident prompted me to dislike clamping to spindles that's machined to the subplatter and/or bearing.

Another accessory I can think of is to have two stiff platter mats to work with the detection device, one for playback on turntable and the other to get ready for the next disc. Obviously this dual mat system would require the turntable spindle to be smaller than usual if you were to do the centering away from the turntable, unless you want to enlarge every hole on your record collection.

Regardless of how one does the centering, making people and the industry to be aware of eccentricity is indeed a positive step forward. It might prompt them to come up with affordable accessories in the future. Heck, those expensive high end turntables should have an integrated system that does the centering for you!


Those detecting holes on the device. 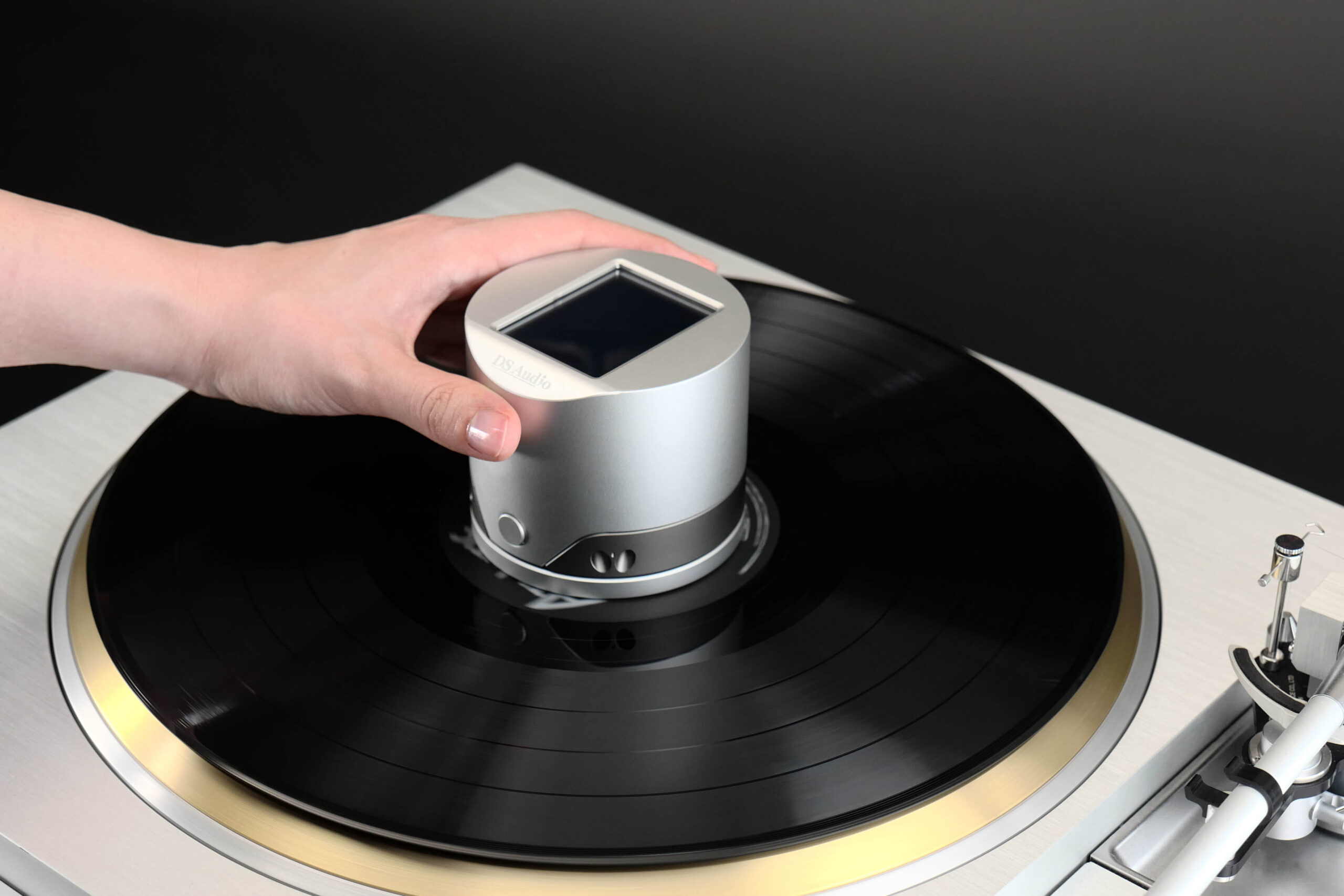 Let's contemplate a new device or tool that allows easy and affordable way to adjust record eccentricity. The run out groove seems like a good indicator of concentricity. First, we need to the modify the bottom portion of the the spindle to be slightly smaller that allows shifting the record. So, if we use a puck that its diameter is EXPANDABLE to match the run out groove then we can adjust accordingly? I am just spitballing here!
•••
Show hidden low quality content
You must log in or register to reply here.
Share:
Facebook Twitter Reddit Pinterest Tumblr WhatsApp Email Share Link
Top Bottom