Patrick Bateman said:
From the paper, here's some guesstimates on where the tubes are tuned to.

Note the lowest is at 620Hz, and clearly shows as a 'spike' in the graph.
Click to expand...

When reviewing the study, I thought that it was behaving a lot like KEF's metamaterial enclosures.

Karabassis has posted a spreadsheet that can help you calculate the length of the stubs that are part of the enclosure.

It took me far too long to process what's going on, but here's what I think:

2) In a back loaded horn, the stub is tuned to one quarter wavelength, and the output from the back of the loudspeaker augments the front of the loudspeaker at 1/2 wavelength. IE, if you have a BLH that's tuned to 1/4WL at 24Hz, the output from the rear of the cone will augment the front of the cone VERY STRONGLY at 48Hz. Basically you will get a very strong enhancement at 48hz.

2) In a back loaded horn, the stub is tuned to one quarter wavelength, and the output from the back of the loudspeaker nullifies the front of the loudspeaker at one wavelength. IE, if you have a BLH that's tuned to 1/4WL at 24Hz, the output from the rear of the cone will nullify the front of the cone VERY STRONGLY at 96Hz. Basically you will get a very strong null at 96Hz.

I've attached a couple sims, of a subwoofer tuned to 24Hz in a back loaded horn. You can see that there's a 1/4WL resonance at 24Hz, strong reinforcement at 48Hz, and a null at 96Hz.

I'm waiting on approval from the original author, but I think what's happening in the Hegeman speaker, and in the Kef metamaterial speaker, is that there IS a tuning to one quarter of a wavelength.

But in a back loaded horn, the 1/4WL tuning leads to a null at one wavelength. In one of these metamaterial or Hegeman enclosures, the null is at 1/2WL instead of a full wavelength.

I'm waiting on approval from the original author...
Click to expand...

You have my permission. I'm Frank Karabassis from Facebook. Hello!

I'll also be building an example of the newest iteration of Hegeman's enclosure with four stubs (instead of 6) of a larger cross-sectional area. This should allow me to tune the Q of the stubs through the use of absorbent material (sponges).
•••

Do you have a link?

It was clear to me from the get go that the hegeman work & the KEF metamaterial have a lot in common.

The stuff I posted that Patrick Bateman is referencing is in Martin King's "DIY Transmission Line Loudspeakers - Theory, Design, and Building" group on Facebook, here:

I'm eager to hear what Patrick Bateman learned from it, and glad the measurements were useful.
•••

Here's the spreadsheet he made:

Thanx. Will have a look.

Looks like this article i the same i read in my original paper copy, and referred to recently in a thread on hegeman’s work.
.

Dave, here's what I posted:

I own a pair of Hegeman Model 1 speakers (the inspiration for the Cornelius Morton article in AudioXpress).

I've read a bit of skepticism toward the Hegeman concept, namely: that an enclosure of this type would result in the same bass extension as a sealed enclosure of the same volume, but at the expense of nulls corresponding to the tuning frequencies of the stubs and significantly increased design/build complexity/costs.

I decided to test the concept to see if it really does provide lower bass response than an enclosure of the same volume.

I'm aware that measuring bass is a crap-shoot, so I made sure to keep everything but the enclosure exactly the same, that way the only variable would be the enclosure. The results are attached:

Never lived with a pair but i did stick my head inside the box and sold the pair.

I thot it was creative, and a useful tool. With modern modelers we should be able to more readily utilize the technique.

What would you use to model it?

I have Martin King's sheets and HornResp, but neither can model this sort of enclosure. Or at least I'm not aware of how to achieve it.
•••

You can’t bend MJK to do it?

It can only be simmed properly with Akabak

You can approximate it using Hornresp
•••

Here's how you can approximate the metamaterial enclosures using Hornresp: 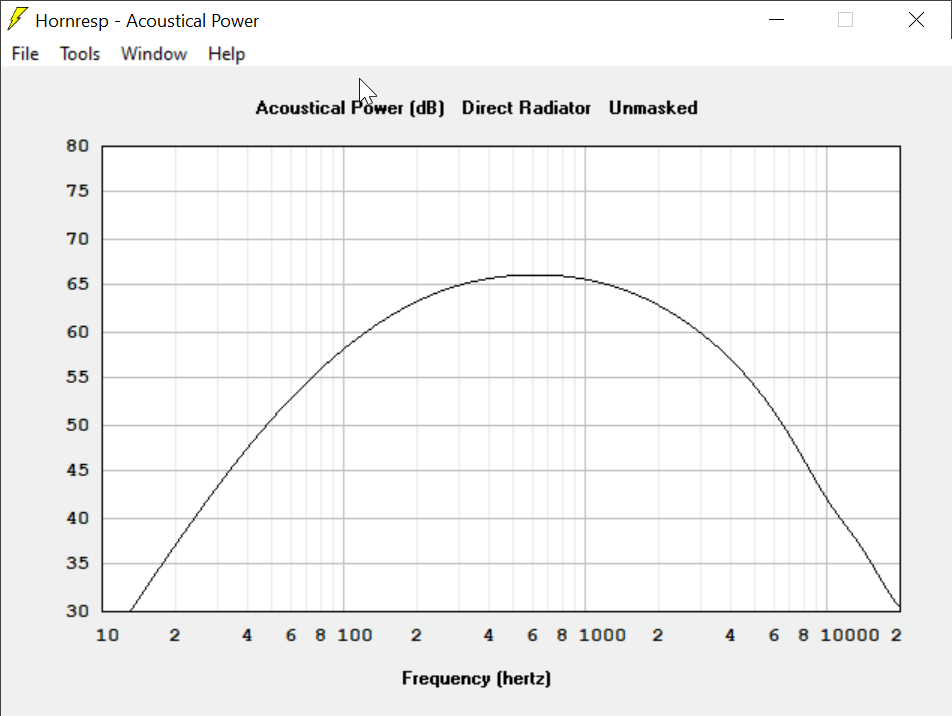 First off, here's the response of a Dayton ND64-16 in a sealed box 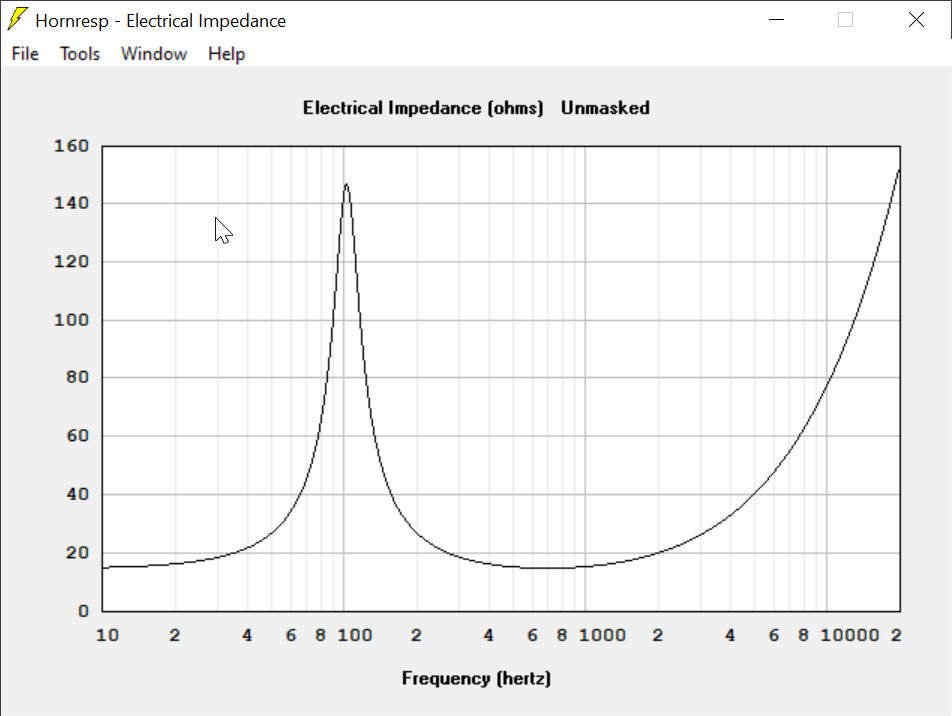 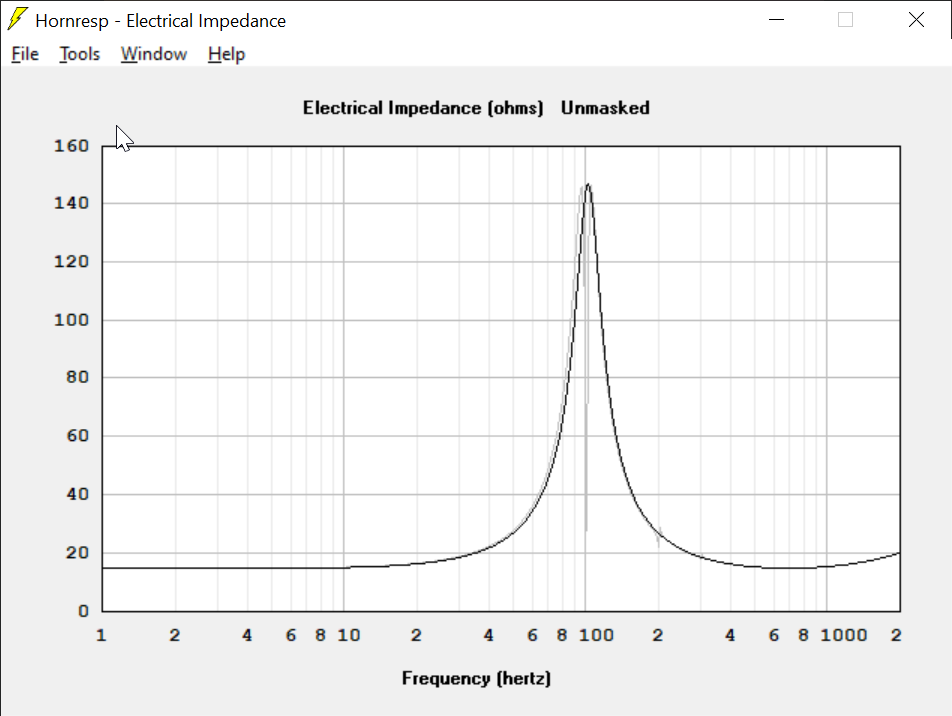 Here's the impedance curve of a closed transmission line versus the same woofer in a sealed box.

Basically, you can create a 'notch' in the impedance curve and the frequency response curve using a closed transmission line. 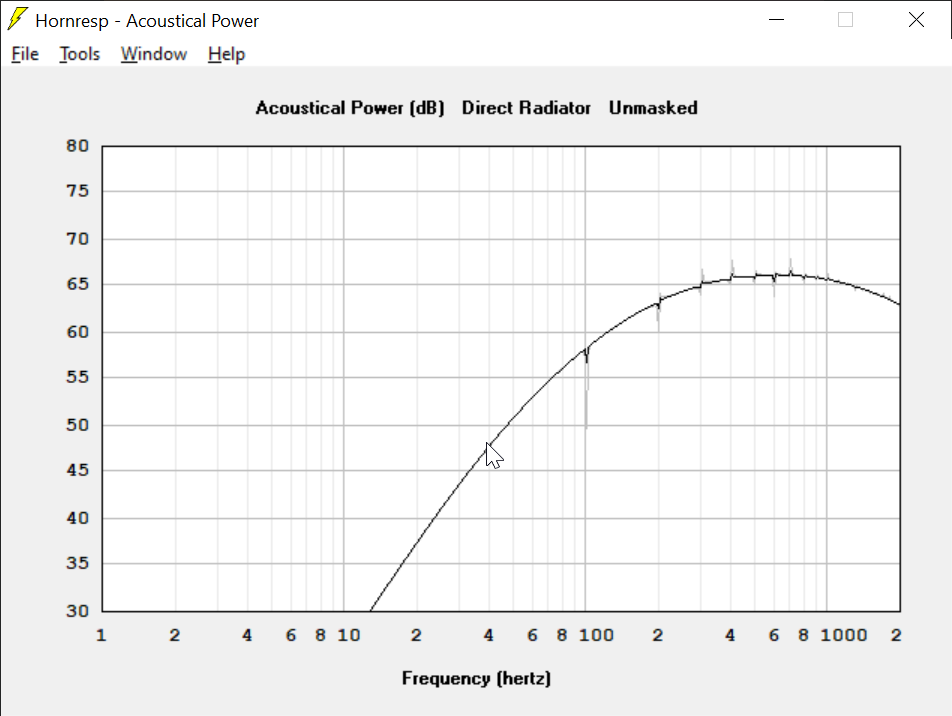 Here's the frequency response curve of a closed transmission line. This graph compares two transmission lines of identical length but smaller volume. You can see that as the volume of the line gets larger, the Q of the dip gets smaller. 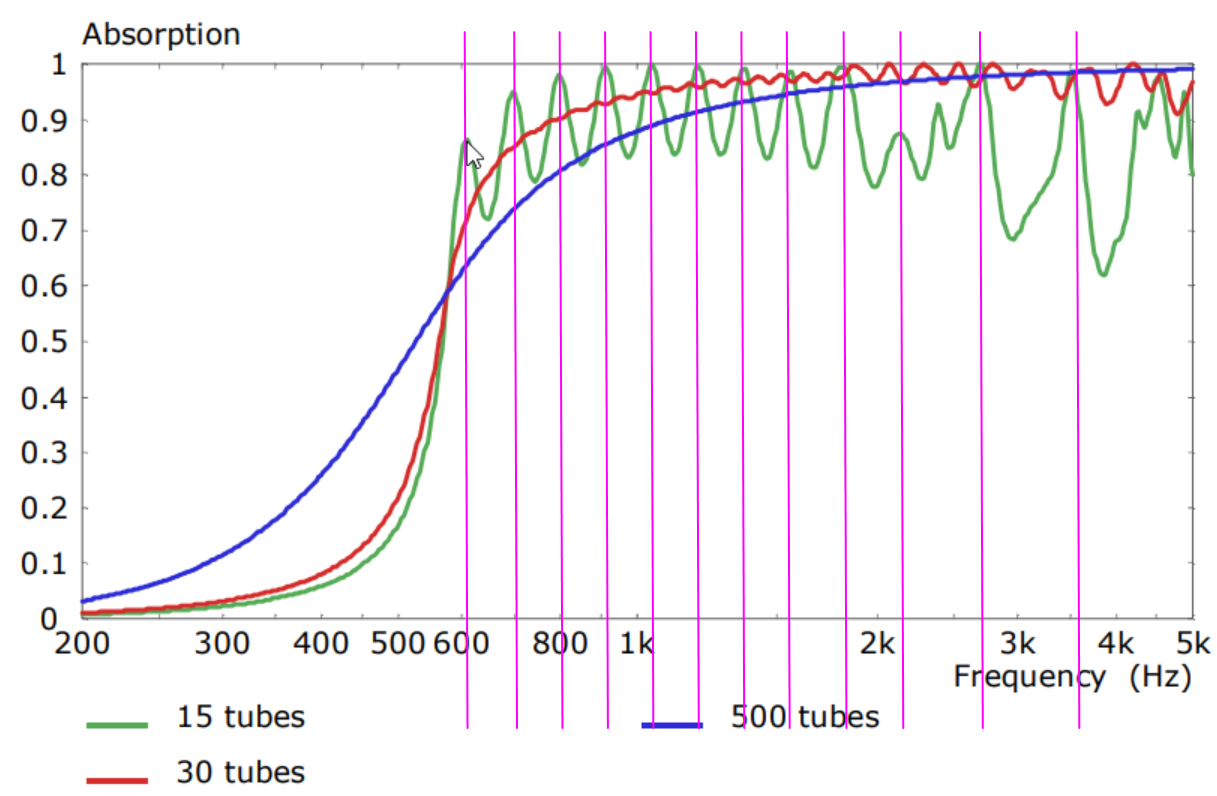 From the KEF paper, here's the absorption with fifteen stubs, 30 stubs and 500 stubs. 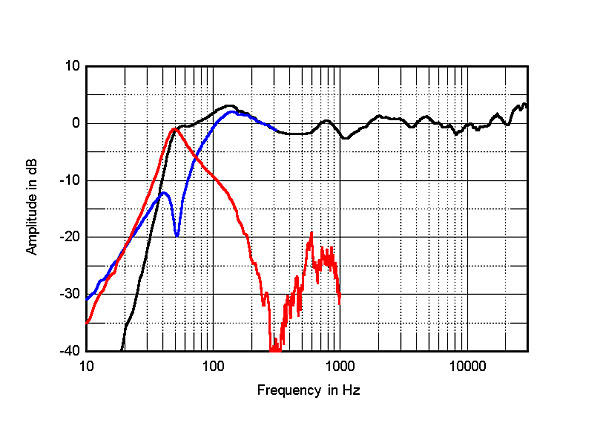 Here's the measured response of the KEF LS50 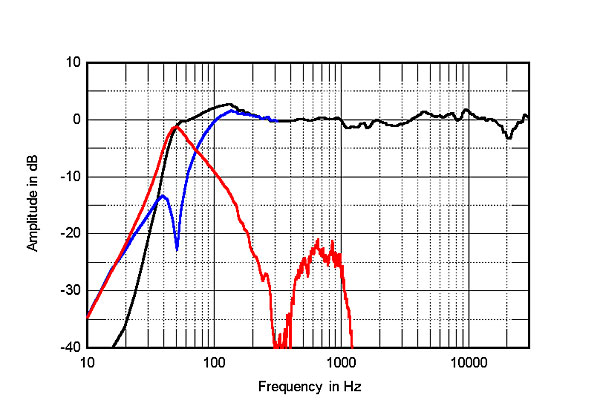 Here's the measured response of the KEF LS50 Meta 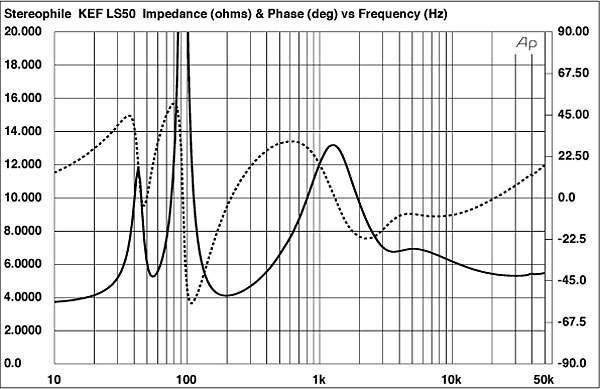 Here's the measured impedance of the KEF LS50 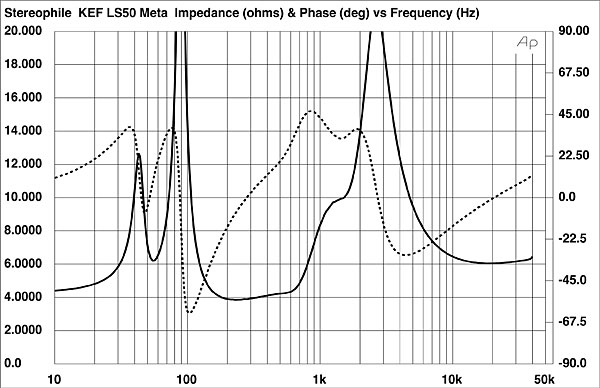 Here's the measured impedance of the KEF LS50 Meta

Random observations from yours truly:

1) It took me a little while to grasp that the dip in the impedance happens at one half wavelength, not one quarter wavelength. To me, this means that the tubes need to be tuned quite low. IE, if you have a tweeter with a free air resonance of 700Hz, the tubes will need to be tuned to 350Hz at least, if not lower. If your impedance peak is at 700Hz, the tube needs to be tuned to 350hz to null it out. I think this is because the TL is closed, not open. IE, if you were trying to do the same thing with a conventional TL, you'd tune it to 700Hz, not 350Hz.

2) It seems obvious to me that this technology would work for back loaded horns and tapped horns.

3) The frequency response on the LS50 Meta is quite a bit better than the LS50. I wonder if part of the reason that the metamaterial improves the speaker is because it's much easier to cross the tweeter over. IE, a lot of reviewers have said that the tweeter sounds more transparent. Perhaps it's more transparent because it's 10X easier to get flat response at the xover point when the tweeter basically has no impedance peak.
•••

I’m sure Martin could do it, since he can add to his code as needed. For mere mortals you might have to get creative.

He ran a custom simulation of the enclosure (below) but he says it's too rough, and also not formatted correctly, to share the sheet.

I'm not sure why his sim did not product the same (slight, but clearly there) bass extension of the Hegeman enclosure.

I wish it was finished and shareable, though. Because in addition to this pet project of mine, it would also be great to use for KEF-style "metamaterials."

Patrick Bateman said:
...From the KEF paper, here's the absorption with fifteen stubs, 30 stubs and 500 stubs.
Click to expand...

Some of the Dayton Audio mid-domes have removable back chambers and very shallow magnet structures that -- it seems to me -- would make a great candidate for a KEF style labyrinth.
Last edited: 2021-11-11 12:42 am
•••
P

Some of the Dayton Audio mid-domes have removable back chambers and very shallow magnet structures that -- it seems to me -- would make a great candidate for a KEF style labyrinth.
Click to expand...