Posted 5th September 2009 at 03:39 AM by planet10
We work closely with Scott Lindgren in the UK. To help facilitate communation, we sent him a set of uFonken with FF85KeN so that we would have a common reference. He got them earlier today and had these initial impressions:

Quote:
Speaking of small speakers, got the uFonken's etc. about 1.30pm & been throwing different albums at them ever since. They haven't batted an eyelid. Christopher Lee reading Dracula on an audiobook? Check. June Tabor? Check. Yo Yo Ma? Check. Loreena McKennitt? Check. Frankie Goes to Hollywood? Check. Mike Oldfield? Check. This is actually bloody annoying. They've no business to work this well. I figured I'd catch them out just before I started typing this by introducing them to PJ Harvey's albums To Bring You My Love & Is This Desire? (officially the eeriest / most disturbing records ever made). Bugger. They haven't keeled over. (Highly recommended albums BTW.) OK, compressed on some of the synth bass (everything short of multiple 15in HE woofers per channel compresses on these albums, so they're in good company), but everything else is magic. Ride cymbal in particular -decay is as good as I've heard from FR units.

I haven't got them properly set up yet, but even way off axis, imaging's very impressive. I won't try making any real assessment until I get them on the end of my B1 / F2 & sitting on decent stands away from boudaries. One thing I'm really impressed with is their LF extension though. It might be faint under 100Hz, but they go down quite a ways. Sod the ultimate computer speaker; you're not pitching these things right. Point them at the hi-fi monitor market. Even with only a few hours listening, I'd say they'd take most of those things to the cleaners with the added benefit of not needing one million watts rammed up their terminals. TBH, I think they're more impressive in their way than the Fonken Primes. Many thanks for sending them. :^) Oh yes -and not least, hat off to Chris; build & finish is excellent. Love the veneer. Nice detail touch too, painting the vents black & the brass screws.

Spent another hour listening to them; they really are very nice little micro-monitors indeed. General 'criticism' thus far: they're not as neutral as, say, the A6 with that upward-skewed balance & they certainly do compress more. But they're much cleaner than anything I've heard to date with the FE83/7E, or any of the 3in Visatons the Germans rave over (and which I think are chronically over-rated). I like them. Lots. 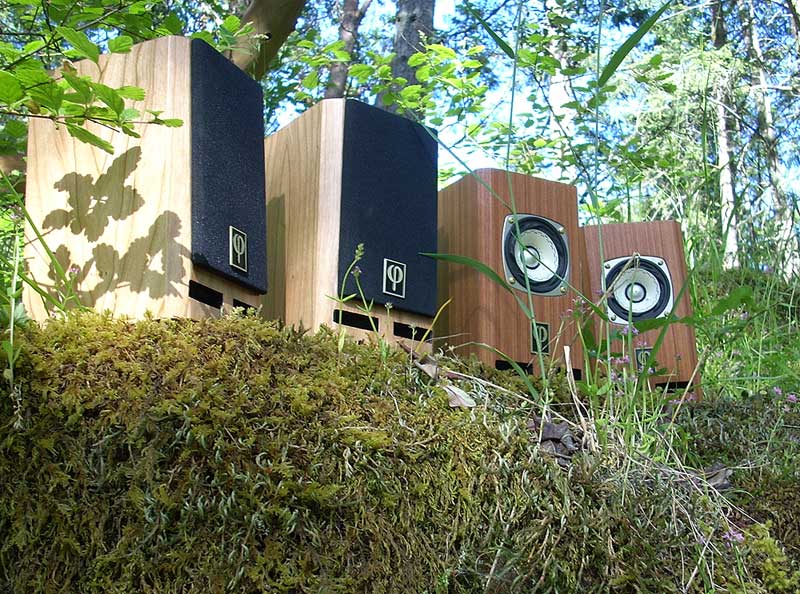 Scott's are the ones on the right.
The 1st of the critisms can be largely dealt with by adding a woofer (as in Tysen) -- we did send Scott a pair of woofers too.