Surrounded by glass, no really my room is full of

I'd have to wholeheartedly agree with your assertions, plenty of cheap good sounding stuff available. And the pre-war stuff up to the early 50's sounds and looks great, but is really tricky in some other respects.

However those tubes are so old by now, that for most of them they have loose sockets due to the glue crumbling with age, gas if they have never been used in the meantime. And poor lifetime in comparison to some of the stuff made between 55-70. The reasons behind this, i think are fairly straightforward. As militairy applications of vacuum tubes increased, there was a lot of investments in materials. Case and point: somewhere in the 50's the vacuum melting process was introduced for cathode nickel in indirectly heated tubes. Before that time it was customary for vacuum tube manufacturers to select ingots of nickel that met the specifications for trace elements. Once vacuum melting got more commonplace manufacturers could just order the raw materials for high quality tubes from a catalogue.


As for Rods opinion on the matter of indirectly heated 845 equivalents, I think that this has to do with the available materials, and the fact that 845 was obsolete by the time WW2 was over. Philips and a boatload of other manufacturers made some really really nice directly heated triodes, example gracia: RS237 a Telefunken transmitter tube that was ultra high quality, but the stuff that survives today is mostly gassy or has other issues. I once had to test about two dozen for gas for someone that didn't have a 750V capable regulated power supply. And i think about 2 out of 20 weren't gassy.


I also acquired about 20 elektromekano M7 triodes, these are said to be spare parts for the german Kriegsmarine during WW2 made by the Danish Elektromekano factory. That factory was bombed by the RAF during WW2 and no others where ever made. I had about 20 NOS NIB in original box with Kriegsmarine approval stamps. Sadly they hadn't been used in all that time and about 16 where so gassy they looked like mercury vapor rectifiers.

If you want some pointers of tubes: 42 and 43 are not yet discovered, and these are beautiful ST type pentodes with a round anode. Looking at the curves they will give you a boatload of harmonics. But there are entire tribes that will dig this sound.


There are also some ultra rare AL type indirectly heater pentodes from before the war with black carbonized mesh anodes.

My objection to 300B is the replacement cost only. It's obviously a pretty superb valve, though; the curves don't lie. As for 845 and 211, they are fantastic also, but no way would I have a kilovolt supply around the place.
•••
S

Who needs SET when there is SEP?

A 300b can last 10k hours. Until now i have never replaced any (only from people with bad designed amps).
•••
P

Well, Schmitz, then you may have some tricky feedback to implement, which is not necessarily easy to optimise, particularly if you are including the transformer secondary; how many DIYers attempt a Williamson amp without the benefit of having, say, Partridge transformers and end up with a stability nightmare!
•••
P

Lampie, then you are lucky; I got fed up replacing them (commercial amp).
•••
P

Anyway, it's MUCH more fun to try different things; I never like to do the same thing twice!
•••
S

Bought those Siemens tubes once for cheap. They'r good for at least 10k hours of listening pleasure, not worse than a real 300B.

I also try many different types of amps as it is indeed more fun. Now i need to repair a 845 amp from a friend. 1KV on the plates (anodes). As the design was altered i have now stripped it totally and will create a new driver stage for it. Originally it was a Ming-Da Meixing mc 845-c.
•••
S

Surrounded by glass, no really my room is full of

Schmitz77 said:
Bought those Siemens tubes once for cheap. They'r good for at least 10k hours of listening pleasure, not worse than a real 300B.

Btw, no nightmare feedback applied. This is NO Williamson.
Click to expand...


Edit that Stahlröhre could be everything, you could also use the triode half of EBC11


If you really want to give the studio guys a hearth attack, say that that are VF14K

Schmitz77,
the input voltage to output current relationship helps in determining the operating point and all the rest is mythology. It does not reflect on signal transfer.
•••
S


Edit that Stahlröhre could be everything, you could also use the triode half of EBC11


If you really want to give the studio guys a hearth attack, say that that are VF14K


Why the 2x GZ34 though, that looks a bit overkill.
Click to expand...

One for input and screen, one for anode supply. Two different complete PSU. Double mono, 50 pounds each. No overkill, just two good amps for 8W output.

sser2 said:
Unfortunately, that thread was inconclusive because no comparisons can be fairly done between DHT and triode-connected sweep tubes.

However, this DHT-IDHT pair of 6B4G and 6A5G provides an opportunity to answer the question of whether DHT are inherently superior.

I can volunteer to procure a sample of 6A5G. Smoking amp has the means to trace its curves. Is there anyone who has a 6B4G SET amplifier to compare sound quality?
Click to expand...

I have some data on this topic that might be of interest, but requires a bit of background. I have a 6A5G SET amplifier and many pairs of 6A5G. 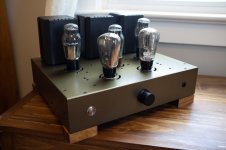 Despite rebranding, the 6A5G was only ever manufactured by Sylvania and Visseaux of France under Sylvania license. Having tried the Sylvania variants, I purchased a pair of NOS Visseaux 6A5G.

To my surprise, I found that the Visseaux model did not contain cathode sleeves, it is a directly-heated tube with a center-tapped filament, sort of a hybrid between the 6B4G and 6A5G, despite being labeled a 6A5G. Guess Visseaux wasn't up for adding the sleeves.

Here are their curves for comparison. 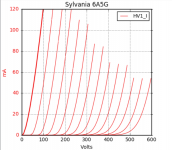 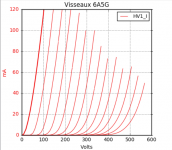 Sadly, one of the Visseaux 6A5G is having a filament malfunction, a suspected short that I will attempt to break, but when working they sounded fantastic even with AC heating.
•••

I haven't revisited the comparison due to the shorted filament, but at one point I did do an A-B between the Sylvania IDHT and Visseaux DHT 6A5G and I felt the DHT was more transparent, despite AC heating.
•••
6

L0rdGwyn said:
I haven't revisited the comparison due to the shorted filament, but at one point I did do an A-B between the Sylvania IDHT and Visseaux DHT 6A5G and I felt the DHT was more transparent, despite AC heating.
Click to expand...

This is important. At least one piece of evidence for different sound in an IDHT/DHT pair with similar plate curves.
•••
T

Why? Because with class A my amp draws less current under load then idle. Thus we must blast the music to save energy ... just something you see in Spice sims.
•••

Trajan said:
Why? Because with class A my amp draws less current under load then idle. Thus we must blast the music to save energy ... just something you see in Spice sims.
Click to expand...

class A amps have their output devices dissipating maximum power/ currents when in idle, so that when delivering power to the speakers, it dissipated less, but music is such a low energy item so that the amp still is hot and if it cools at all, just a little bit...
•••
Show hidden low quality content
You must log in or register to reply here.
Share:
Facebook Twitter Reddit Pinterest Tumblr WhatsApp Email Share Link
Top Bottom