They are KEF Q35’s. My luck must be in, I’ve never seen KEF in my area on freecycle either!

When I got them home I noticed one speaker sounded like it was blown. A very scratchy sort of sound on the thump of any bass. Oh well, can’t win em all.

My thoughts on these are: I don’t like the design of the driver, most peculiar. It’s not full range, it’s a tweeter sat in the centre of a mid bass. :-/ the posts on the back of the crossover are separated for high and low frequencies.

Here is the driver: 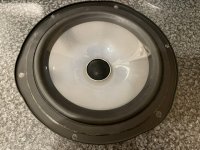 One possibility would be grabbing a cheap full range driver on AliExpress and swapping out, just using the cabinet. Pressing the cone with my hand produces the same noise! What? The cone is plastic, is it cracked? Personally, I think it sucks. But free is free and landfill we don’t like, so let’s disassemble: 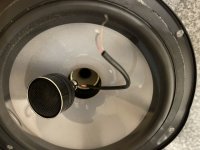 So it looks like there are rough edges on that tweeter!! 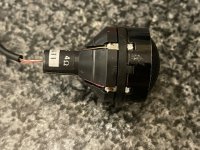 Could it be as simple as the edges scraping the cone as it flexes?

Let’s tidy up the solder, push the contacts in as much as possible and tape with Kapton. After this some silicone spray to facilitate smooth movement: 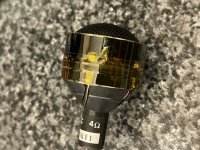 Also here is the crossover: 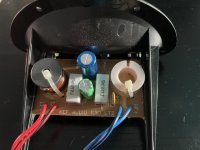 They’re about 20 years old, so I’ll put the mundorfs I just got got the Goodmans in there. The bass value is 10uF and the tweeter value is 8uF. I have a 10uF, and will use 2 x 4.7uFs in parallel for the tweeter.

While I was in there I replaced the foam gaskets: 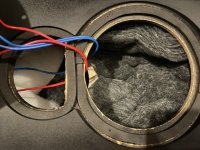 Verdict? Scratchy noise is gone! Not sure if the recap has made a difference. The recapped speaker sounds the same as the one that hasn’t been, so will probably put the old ones back. Not bad though.

One thing I will say (and I’m going to come across as a real bass junkie here) is that the bass SUCKS. I assumed the entire cabinet would be open to increase the bass, but it’s blocked off 3/4 of the way down. I wonder if opening that up would help. Not sure how I’d get a power tool in there though.

My daughter is already eyeing them up.
•••
G

Good work on bringing these speakers "up to scratch"!

Any attempt at changing the internal volume will upset the tuning of the port and the bass response will change unpredictably.

It is the concentric arrangement of bass cone and tweeter that contributes to the quality of imaging for which the Q35s are valued.
•••
D

I’ve removed the large blob of black sticky blutack type stuff that seals around the hole where the wire feeds from the top section to the bottom section of the cabinet and that seems to have done quite a bit for the bass should I put it back?

I’m always dead chuffed when I can fix something like this.

Edit: whoops, just seen your above post. I really must stop getting distracted then continuing a post from a while back. I’ll pop it back in then. I suppose if it’s not me listening to them it’s not really a problem.
Last edited: 2021-09-12 1:45 pm
•••

HaHa, you must have found the reason somebody dumped the KEF Q35 speakers!

Interestingly simple crossover on a polycone bass. I don't know if these were Mundorf NP capacitors you fitted, but I think it's likely you had a broken solder joint there. The vibration often cracks them

I forgot to properly solder the 8.2R/4.7uF shunt on these: Sounded hideous at high volume, all cracked and distorted! Thought my amp had gone wonky.

As for the sticky blutac, well who knows? You seem to hear different bass every day....
•••
D

system7 said:
HaHa, you must have found the reason somebody dumped the KEF Q35 speakers!
Click to expand...

I think so, I’m certainly not complaining. they listed them as working which I think was a bit naughty, not because we should complain about free but because there are plenty of people who happily collect broken (myself included) but it was 30 mins each way and if you were expecting them to work and had driven all that way then had no idea about fixing this sort of thing you might be quite disappointed.


system7 said:
Interestingly simple crossover on a polycone bass. I don't know if these were Mundorf NP capacitors you fitted, but I think it's likely you had a broken solder joint there. The vibration often cracks them
Click to expand...

Possibly, but they sound great now. Very clear and detailed. I have a habit of overdoing solder on things so I doubt it’ll happen again. They are shadowed by the Goodmans though. thinking about it, there was a piece of hot glue rattling around in there that had come loose from one of the ferrites, and there is a slight defect on one corner. My guess is maybe it was dropped or knocked. The lady said “they’re in the way” I like “in the way”.


system7 said:
As for the sticky blutac, well who knows? You seem to hear different bass every day....
Click to expand...

david83 said:
Did I mention the caps have run in?
Click to expand...

There's an argument that electrolytic crossover capacitors may benefit from a run in period. This may be necessary to reinforce the aluminium oxide insulating layer or dielectric which forms on one of the capacitor plates during manufacture.

The oxide layer is formed during manufacture by applying a voltage across an electrolyte paste situated between the capacitor plates - hence the name 'electrolytic'.

Since film capacitors have a layer of plastic as the dielectric there is no electrolyte involved and, technically, there should be no advantage in a run in period.
Last edited: 2021-09-12 4:08 pm
•••
D

That may be true, but they definitely sound different. Both the mid clarity and the bass depth have increased. Scratching my head and looking for an explanation for this, perhaps:

- the foam around the bass - although it was already improving before I added that!
- the mids being run in? I’ve seen reviews on full range drivers saying they need some time. Does the rubber surround soften and improve?
- the reduction of mid resistor - this definitely helped with balance, the KEFs clued me in on that. I was listening to them and that prompted the reduction.
- the position in the room

For whatever reason, they sound phenomenal now. Full, rich, detailed and clear. I was listening to some Chill-Hop on them earlier (yeah….. 1. That’s a thing 2. I have wide music tastes ) and the warmth and depth was lovely.

On a negative note, I lost the eBay auction :-( back to the search for hardwood. I’ve even considered coffee tables I can hack up! We’ll get there….
•••
G

I had to look that up! https://www.forbes.com/sites/willia...-whatever-you-call-it-its-driving-gen-z-mild/

Yeah I’m Gen Y and I didn’t even know I liked it. I’m not really a fan of hip hop so I didn’t think I would, but curiosity got the better of me when it popped up as a suggestion: 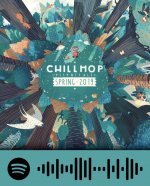 The first thing I thought was: Wow this is actually really good background easy listening.

@Galu any idea what these are? B&W? 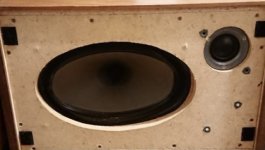 The image is too dark for me to see if the elliptical unit is a twin cone, full range driver or whether that is a tweeter or a port alongside it.

You would have to get inside if there are no other external clues.
•••
G

It was EMI that I was thinking of. Well known for their elliptical drivers.

I don’t have them. I’ve just seen them pop up. I’ve messed around with the brightness on my phone: 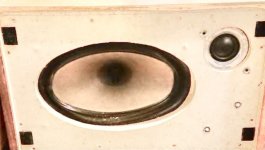 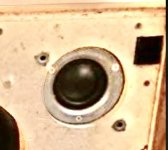 Not much on the back: 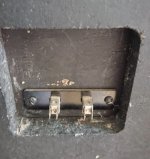 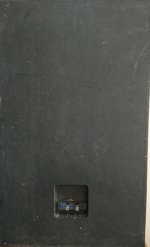 Those posts do seem to look the same as the disassembled pic you attached above. You can make out the rounded square they are sat in.

The speakers you picture could well be home made.

The dome tweeter is a departure from the EMI cone tweeter which usually accompanied the elliptical mid/bass driver.

Even if the elliptical drivers are from EMI, I can't see them as being anything special - such drivers were probably made in their squillions.
•••
D

Ok I will leave them then.

I still haven’t been able to get the wood I need for the stands, so I’m going to go back on what I said. I’ll be writing up the thread over the next few days but here’s a picture of the finished article…. More to follow. I’ll have to add the stands at some point when they are done. Not sure when that might be! 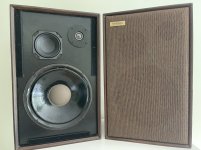 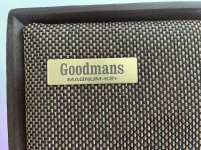 They're looking really good - as good as new in fact!

I'm a big fan of the retro look - being retro myself!

We love the retro look too. That grille fabric was an absolute b**** to do though. Aligning the vertical and horizontal weave whilst pulling tight, and avoiding puckering whilst stapling was probably the hardest part of the entire thing. Even the veneer issues we had! Worth it in the end though. ;-) I’ll get all the photos I took as we went along and post a new thread next week when I get a chance.
•••
D 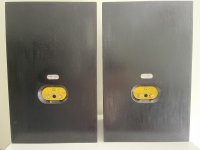 No more chocolate mousse. We varnished the yellow paper as well to preserve it.
•••
D

@Galu @system7 guess what I’ve got coming my way… 2 of these from a broken MK the woofer unit. 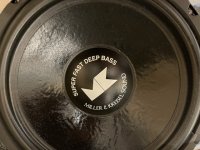 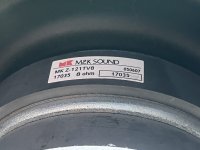