having some issues with first powerup testing my first output board, dim bulb test goes okay as in there's no short, but after going dim it doesn't come back up to any level of brightness again, and when measuring across R2 as shown I'm getting 0v dc - I rechecked the voltage on the PSU board and that still looks to be correct, and the LED on the output board is lighting up - any ideas what to check here? I set the pots to midpoint before soldering them on, and didn't see any change fiddling with the position of the bias pot 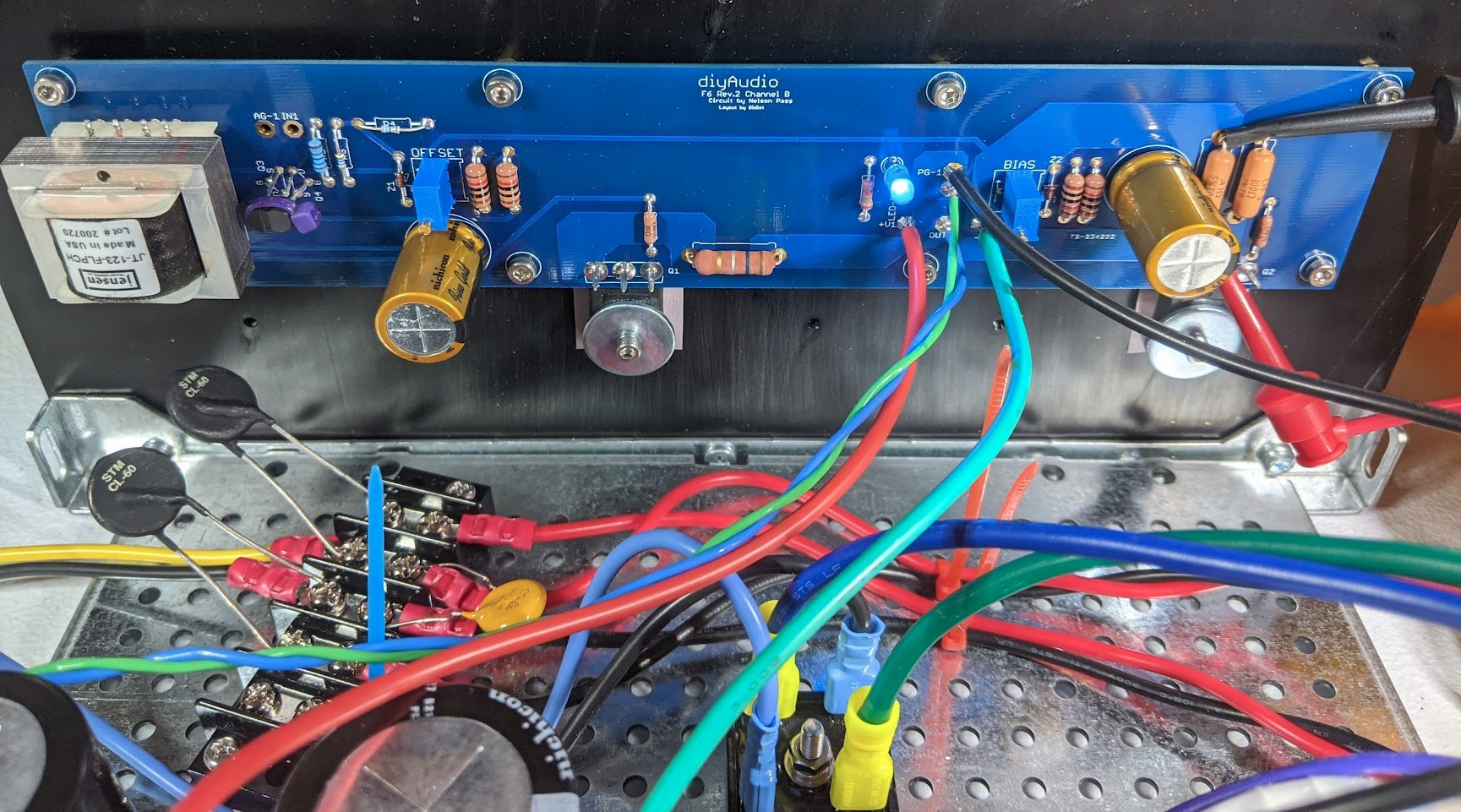 If you have no short, then you can remove the DBT and power up without it.

Also make sure that the zener diode Z2 is installed with correct polarity. Voltage drop across it should be 5.1V.
•••
D

I did go ahead and remove DBT, rechecked Z1 and Z2 and polarities both look correct, I'm seeing 5.3V across Z2 - I believe the orientation on the pots should be correct, the notches match up with the PCB at least - I checked both with a multi to verify they worked & had expected ranges before I soldered them on, they're bourns 3296W-1-502LF
•••
B

Confirm that R1 and R2 are the proper values.

Are you now getting a voltage across R2?

Pot orientation only affects direction of rotation, but should not affect amplifier operation.

With the dim bulb tester in place, did you set the initial bias and offset as described by 6L6? 'You can, however, set the initial bias with the bulb in place. Start the procedure, turn the pots until something happens, and set, at maximum, 0.1V across the source resistors and zero offset.'
•••
B

Another thing to check is Vds of Q1 and Q2. If there is Vds (approximately PS voltage) and Vgs at both Q1 and Q2, then both mosfets should turn on once Vgs is high enough. If the voltages are there but the mosfets do not conduct current, then perhaps the mosfets are defective.
•••
D

I suggest just turning the pots more as Ben suggested. and make sure you are increasing the Vgs and see if you start seeing values readings through R1/R2.
•••
C

Please don't assume that the pots will work the "correct" way, mine did not!
You may have to move them quite a bit to see a result.
Remember, you are moving both pots, in balance to set bias and offset, don't just try moving one alone.
I suggest one turn on each alternately till you see a change across either of the resistors.
Reactions: 1 user
•••
F

ColinA123 said:
I would suggest that while you are waiting you desolder and pull the J-fets then measure them. You only need a 9v battery and a multimeter.
In my sad experience when things go wrong the J-fets are the first thing to give up.
View attachment 1076812
Click to expand...

Hi Colin,
I did measure the FETs with Peak Atlas DCA75 Pro. Is there an advantage to testing them the way you described?
•••
6

decompositions said:
I set the pots to midpoint before soldering them on, and didn't see any change fiddling with the position of the bias pot
Click to expand...

How much time are you giving to check the voltage after turning the pot?
-The cap takes a bit to charge up. After that, there is a time constant between making adjustments of the pot and seeing the voltage change. Patience is needed.

freebee said:
I did measure the FETs with Peak Atlas DCA75 Pro. Is there an advantage to testing them the way you described?
Click to expand...

Your results from the Peak are likely fine in showing the jfets are functioning. However, the method Colin described has the advantage that it is pretty much the standard way Idss values are quoted. In the Toshiba datasheets, the Idss values
are given at a constant Vds = 10V with Vgs=0. The Peak (probably because it's a battery powered device with its voltage and current limitations) gives you measurements at low and variable Vds values (In your tests, ~3V for the k170 and 1.78V for the j74).
Reactions: 1 user
•••
D

This did it, thanks for the help guys - I didn't expect that midpoint on the pots would be so far off base as to cause 0v across R2, I was able to set bias and offset after messing with the pots for a while - getting Vgs on mofsets closer to 4v got it a lot closer to a workable starting point
Reactions: 1 users
•••
B

Is there a recommended/standard way of measuring mosfet temperatures? I couldn't find any sort of answer to this and while finalizing bias I'm trying to adhere to the 65c rule that 6L6 stated in the op, is it ok to just measure this with an infrared thermometer? Not sure how hard and fast of a rule this is, but I see some people measuring this with infrared thermometers - when I measure this with mine its obviously reading a lower temp than if I measure the same by putting a multimeter probe on the pin.
•••
C

I.M.H.O.
Better to be slightly inaccurate, but safe, using an IR thermometer.
Than accidentally shorting out the pins with a contact thermometer.

Also, the hand on the case temp is a good indication.
Reactions: 1 users
•••
F

ItsAllInMyHead said:
If you were attempting to measure the bias across one of the source resistors with your DMM set to measure current, what you've effectively done is put another low-resistance path in place of the source resistor. Your DMM manual should tell you the value, but it's not too relevant. Given that the source resistors are 0R47 and 0R56 ... although you saw / smelt smoke, you may not have hurt much given that you likely did not change the current through the associated part 'dramatically'. I'd first check the output MOSFET directly associated with the resistor you were measuring across. It may measure OK on something like your Peak. However, I'd inspect the back of the part for visual thermal damage. If you have another pair of output devices, it couldn't hurt to swap them, particularly since you've already got the board out and one part removed.

My $0.02, and I'm sure I've likely missed something, or that I could be dead wrong. However, that's where I'd start the path to verification and a bit of the logic behind it.

BTW - if you have a DBT and/or a Variac, now may be the perfect time to back the bias back off and slowly ramp back up while taking a few measurements to check operation. You may have gotten pretty lucky and just heated up a part a bit too much w/o killing it. They're fairly robust. Also, if your amp is properly fused, you'd likely have blown a fuse before too much could go haywire unless you were quick, quick, quick to turn it off.
Click to expand...

Good news! My F6 is fine! Tested all parts and couldn't find anything wrong with them. The smoke I saw might have been excessive heat in combination with fumes from PCB cleaner/ alcohol residue. Was able to put Humpty Dumpty together again! Thanks for all your help guys!