Greetings. I've run into a problem with the amp board power up (everything up through the power supply building and testing has gone fine). In a nutshell, I can't get more than about 68mV of bias, well short of the 500mV the build guide calls for. I have the standard 5.1V Zener diodes installed, and can certainly obtain some higher value Zeners, but that reading seems awfully low. I wonder if I should be looking someplace else for the source of the problem.

I'm very much a noob when it comes to building amps, though I have put together three of the Amp Camp Amps up to now. The main difference here is that I sourced all the parts myself for this build since the store was out of the kits. I thought I followed the BOM very closely, though it's possible I sourced an incorrect part. I'm going to go back and check my parts against the BOM now as a first step.

Any help is greatly appreciated,

there is 3K3 and 5V6 (up to 6V8, if you have those) mod
obviously you need that
you can also search for picodumb mod, or simply use 3 series leds, cathodes pointing down
red or green
•••
B

I'll get the diodes and search for some of those other terms in the thread. Thank you Zen.

Before swapping out parts, could you confirm a few things, please. I interpreted from your posts in the PSU thread and above that you may want to "just get it working" in the most simple manner before going too far.

1) Did you determine "which way" the pot turns to increase your bias? CW is not necessarily an increase in bias current. Note from page 1, patience is a virtue. Generally, it can take quite a few "full" turns to get the current to start flowing, and then just a wee bit of a turn can move things more than you may expect. As an analogy, you may have been starting from a point where the faucet was off (no current was flowing through the part) - then it took what may have been perceived to be A LOT of turns to get a reading. The valve is now open. Then, each quarter turn might move things more than you may expect to gradually increase the flow (current).
2) If you've figured out #1, is the bias pot turned all the way "to the click"? Most multiturn pots will have a (to me) very subtle click when the wiper has reached its end point of travel in either direction.

If neither 1 or 2 are true, then I wouldn't suggest swapping parts just yet.

If 1 and 2 are true, then I'd suggest simply changing out the part to a 6V1 Zener, and my guess is that all will be well. HOWEVER, what I don't think anyone has mentioned yet is that if you need to go that route...

Turn the bias pot back FULLY (until it clicks) the opposite way (lower the bias) before powering up the amp again after your part swap.
Reactions: 1 user
•••
M

I've ran into a problem biasing the board on the right hand side. I am not getting any readings from .47R resistor but i am seeing DC offset measurements. Mosfets are not heating up. I reflowed all the components and still the issue persists. Left channel biased just fine. I am using 6.8 zeners with 3k3 r7,8. I'm getting around +-26V from PSU. I tested jfets before installing and thought I was careful to install in the correct position. I set both variable resistors to 2500 midpoint before installing. I am using a Variac and when testing both channels, left is working and right is cold. Nothing seems to be burning. I'll include some pictures. Some of my wiring colors are off but i tried to be consistent. Appreciate the communities help! Thank you in advance. 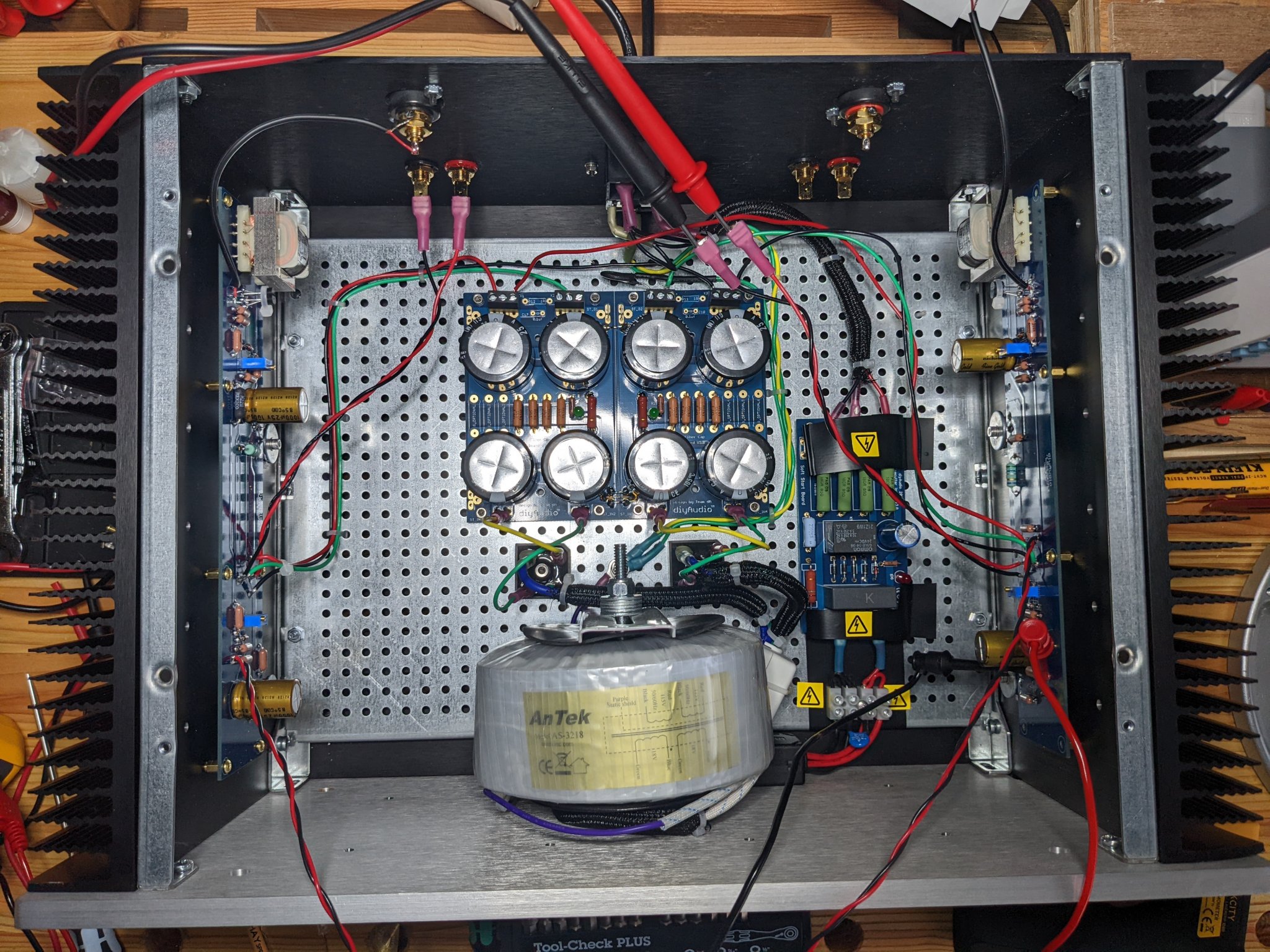 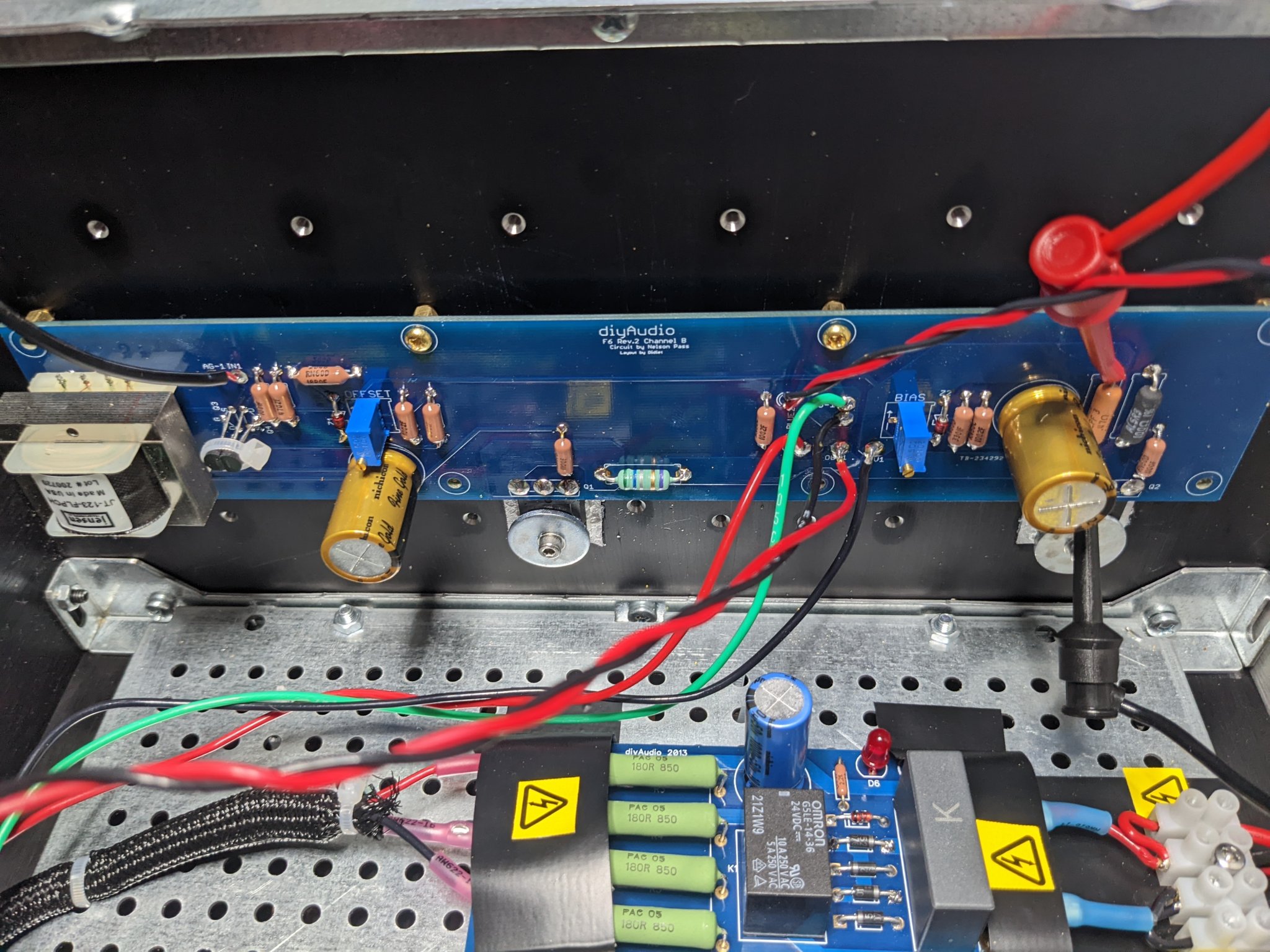 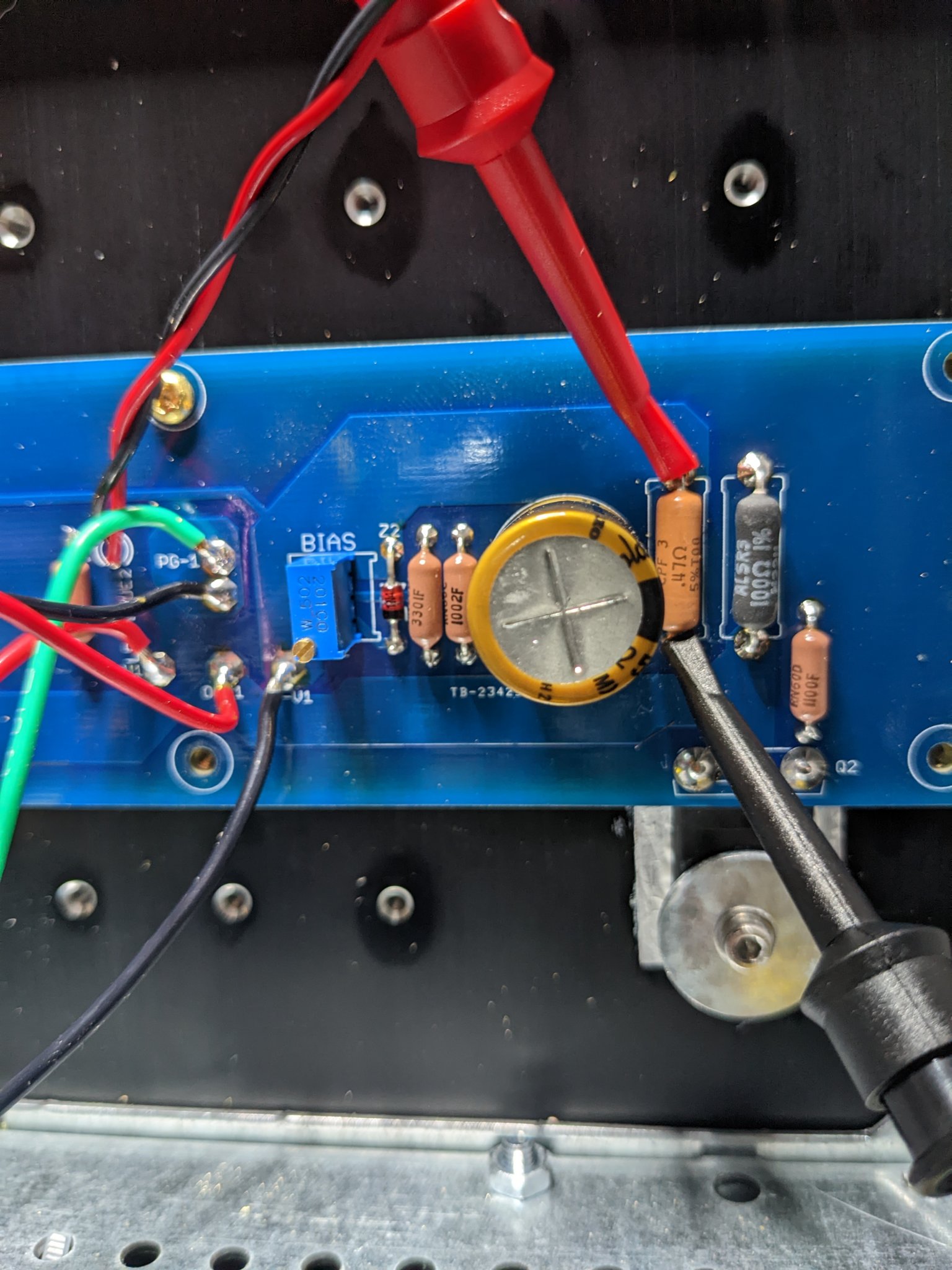 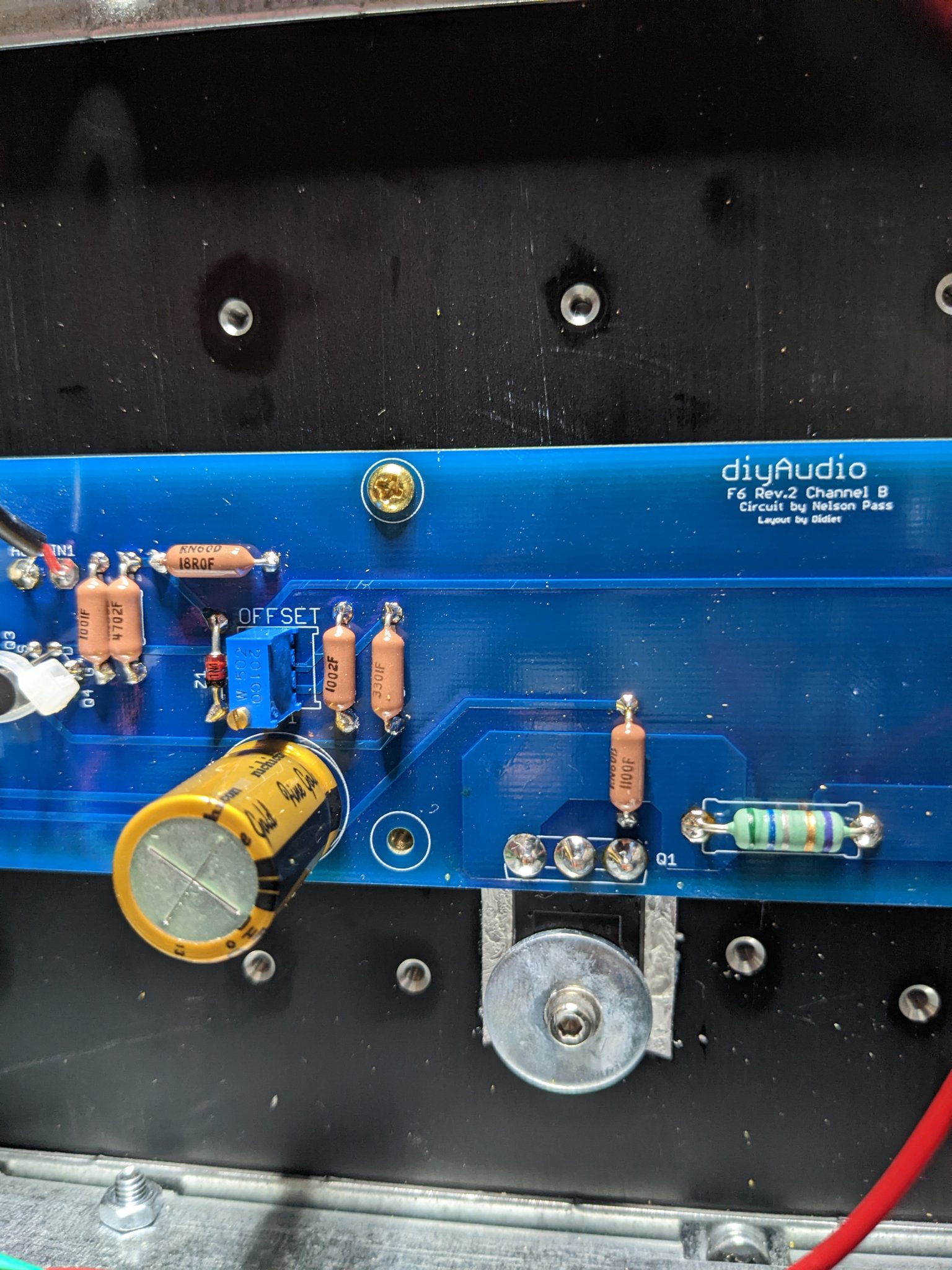 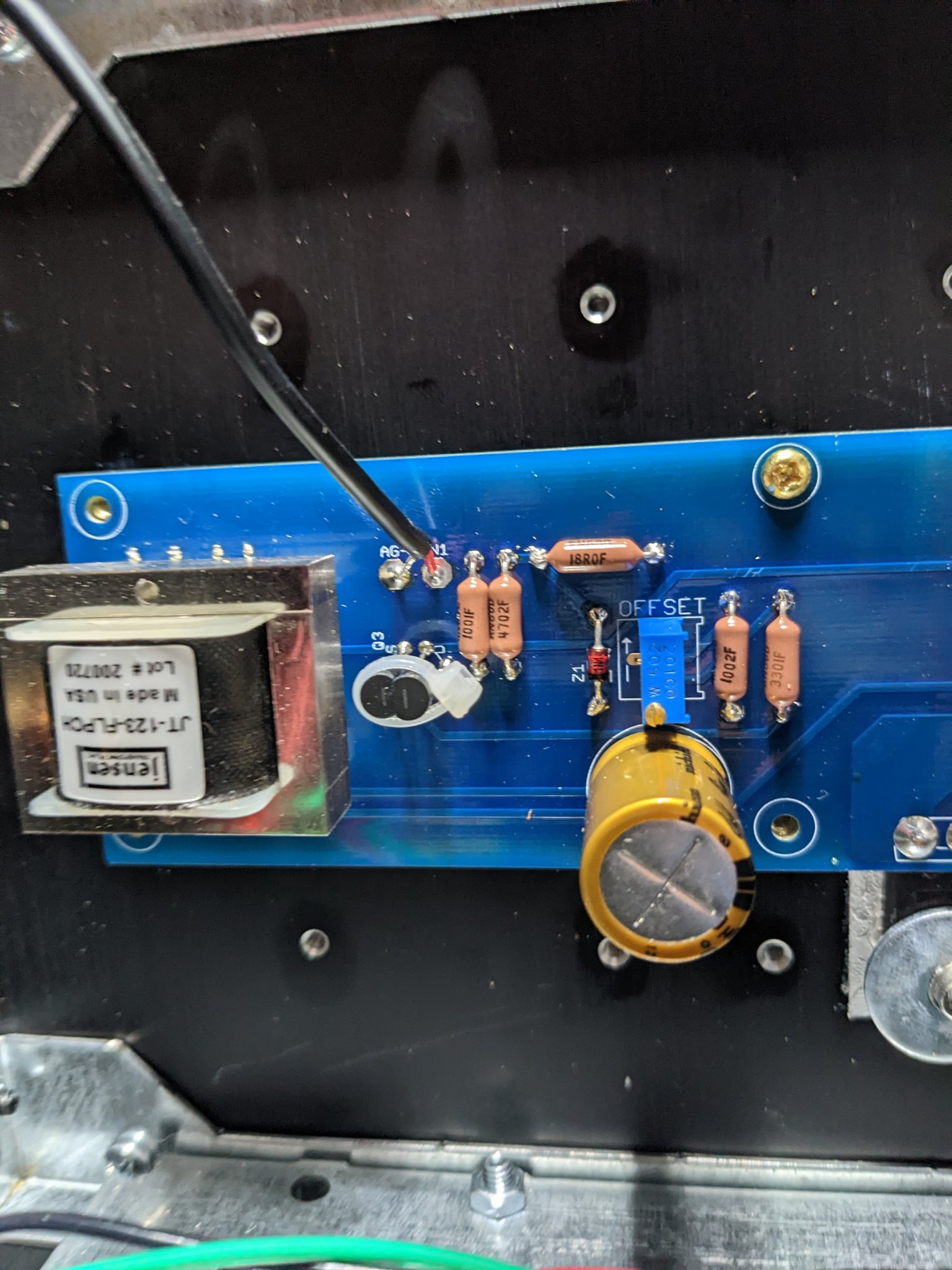 At the midpoint on the pots your Vgs voltages are still lower enough that the mosfets may or may not turn on. When they are fully in, they should be in the 4V range.

Thank you Dennis for the quick reply.

You were right. I had to crank the bias several turns before I started to see a reading. At first I measured .57 resistor but it was at 0 but after several good turns everything seems to be back on track. I appreciate your help.
•••
Show hidden low quality content
You must log in or register to reply here.
Share:
Facebook Twitter Reddit Pinterest Tumblr WhatsApp Email Share Link
Top Bottom