I just got in my matched quad of NOS Russian output tubes for my Baldwin amp yesterday. The main reason for buying these tubes was just to get an inexpensive quad of output tubes to diagnose a slight noise issue with my amp that was being put through the speakers. The noise wasn't loud, but it was quite annoying none the less. I wasn't sure if it might have been the output tubes (as I already swapped the preamp and rectifier tubes) and still had the noise. I was starting to wonder if it might have been the 50+ year old coupling and/or bypass caps. After replacing the Chinese Shuguang 6L6GC's with these Russian 6Pi3C's, the speakers are absolutely dead silent. No hum, hiss, crackle, sizzle, pop, tick... Nothing. So apparently it was the 6L6's causing the problem.

Mind you, I'm not ranting and raving over them, but these tubes sure do sound extremely good for the money. They still have the impact and massive bass control of the 6L6's driving my NHT 2.9's, and they still have that smooth, extended top end of the 6L6's, but what they add into the mix is the warm, full glowing sound in the midrange, much like a EL34/6BQ5 or SE amp. It's the best of both worlds.

Of course, YMMV considering the amp(s) you use these Russian tubes in, but I do urge you to try them out in your setup. I'm sure you won't be disappointed. And at their price point on eBay, you can't go wrong. I paid about 20 bucks more for mine than most of the listings on eBay only because I wanted them ASAP and the NOS ones I found were in California, not in Russia, Ukraine, etc, etc.

Please don't listen to the people who say these tubes are junk and don't sound good. My NHT's are quite detailed and respond very well to differences in the signal chain, both good and bad.

Here's a couple iPhone pics of them, one at night and one during the day. As you can see, they also have that blue glow to them... 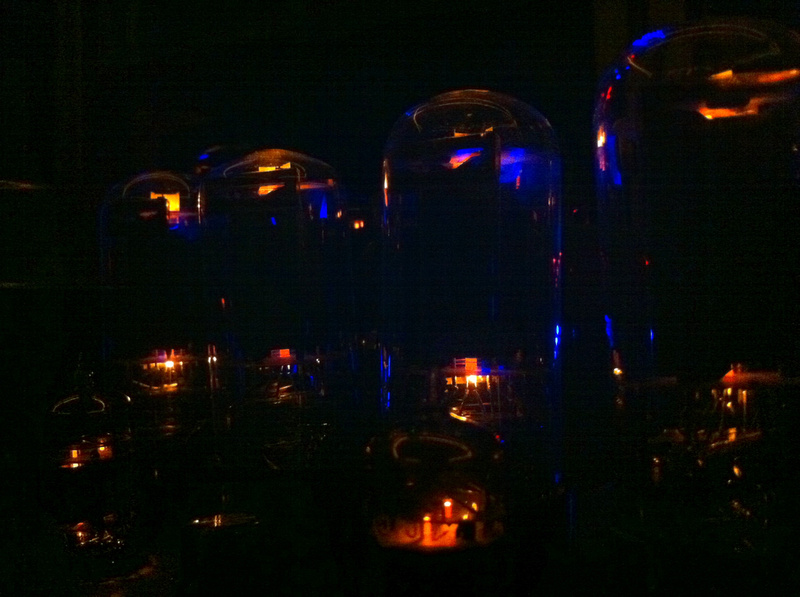 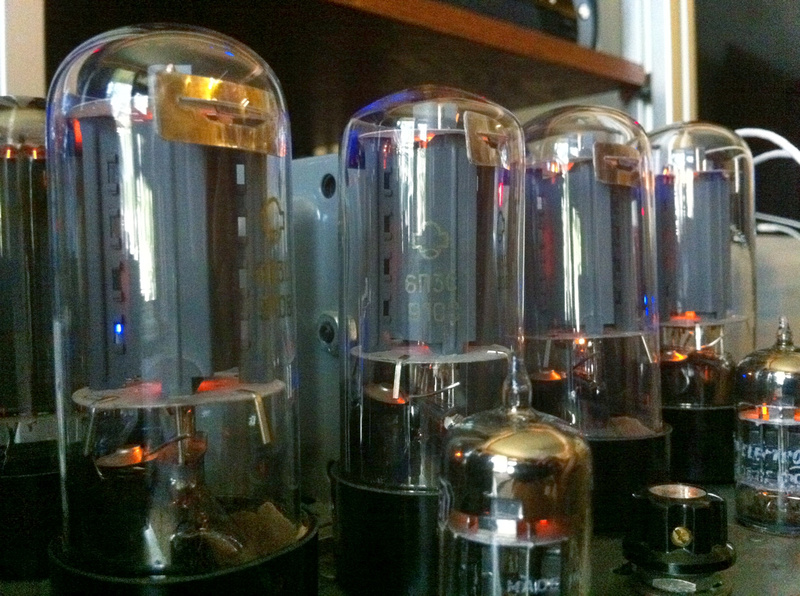 Shhhhhhhh! I haven't bought mine yet.

I see your are running the 6N3C and not the 6N3C-E. good to know they work well.

What are your Plate and Screen voltages?
•••

I see your are running the 6N3C and not the 6N3C-E. good to know they work well.
Click to expand...

TheGimp said:
What are your Plate and Screen voltages?
Click to expand...

Unfortunately, I haven't a clue what any of the voltages are in this amp. All I know is that it's wired for fixed bias.


Also, totally off subject, but what's going on with the forum? Everything is looking funky today.
•••

Those " Gremlins " are reminding us what an excellent job they do for us in the background.
•••

I just went to AudiogoN and found one of Will Vincent's amps for sale (a modded Dynaco ST-70) and sent him an email regarding the technical specs of this Baldwin amp. I hope he replies back soon. I too would like to know what the different voltages are in this amp.

On another note, I'm still listening to this amp and boy do these new tubes sound good!

Speaking of tubes, I asked him a question which is probably a stupid one and am almost afraid to ask here, but I asked him if this amp is capable of running EL34 tubes. I have read that some amps can swap between 6L6's and EL34's all day long, but I think it might have something to do with the actual design and/or power supply transformer. I just figured I'd ask anyway.
•••

At EL34 the supressor is connected to pin 1. At 6p3s pin 1 is not used. Therefore you should connect pin 1 and pin 8 together ( at the tube sockets).

However, the bias of EL34 and 6s3p are obviously quite different, so this should be adjusted.
•••

I found that 6P3S sounds detail, but agressive in penthode mode.
Try, please, use it in triod or UL mode. 6P3S-E is better, IMO.
6P3S is ,IMO, for guitar amplifiers.
•••

I found that 6P3S (6П3С originally) are fair copies of RCA 6L6G, but they are NOS and sometimes gassy; also they are Russian so have spread of parameters wider than barn gates.

(My wife considers me an expert at evacuating gas, but I think there's always something new to learn.)

(Sorry for being off-topic.)

Well here's a few quick shots of the amp and tubes taken with the "real" camera... 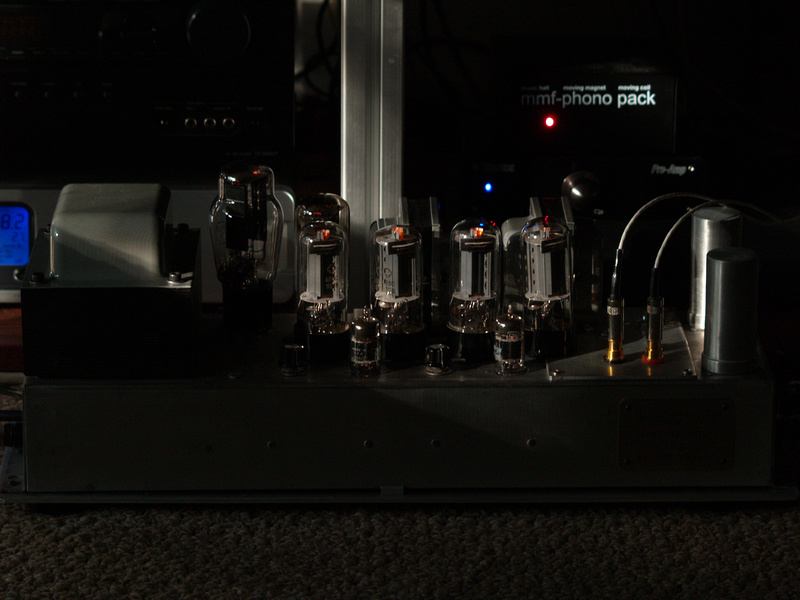 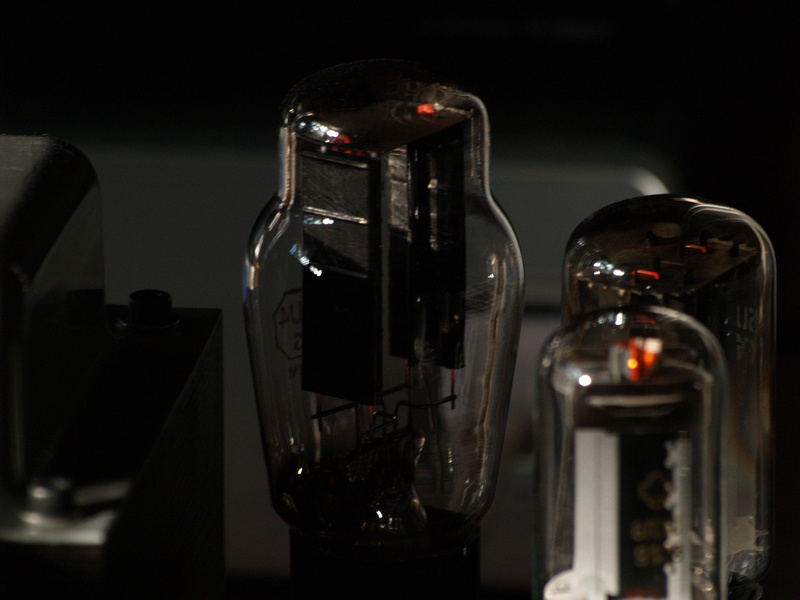 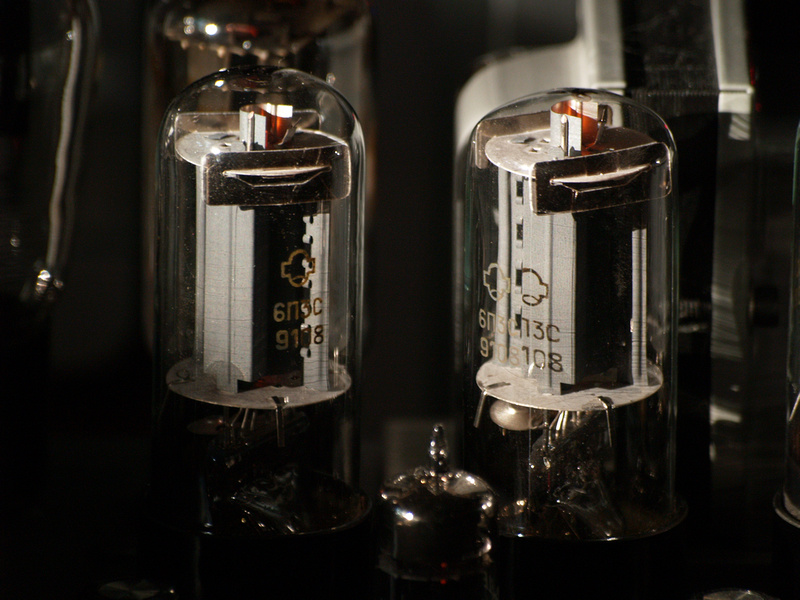 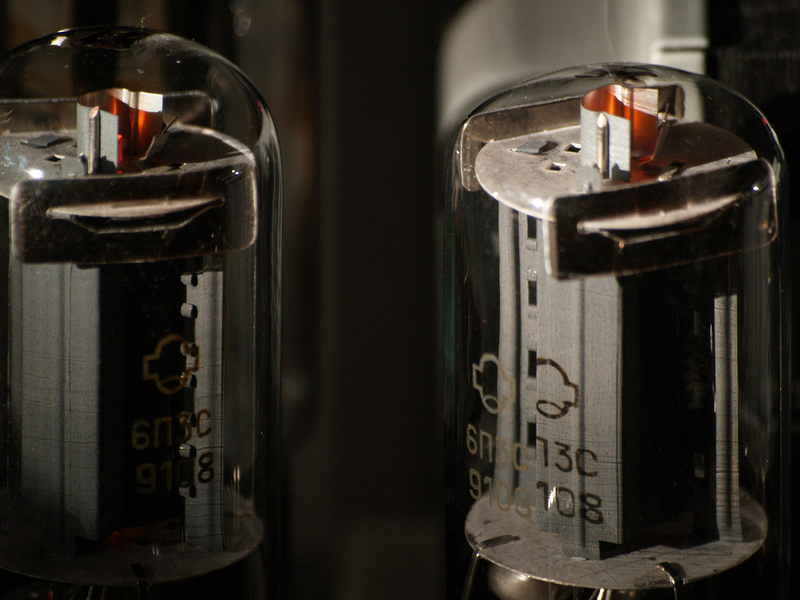 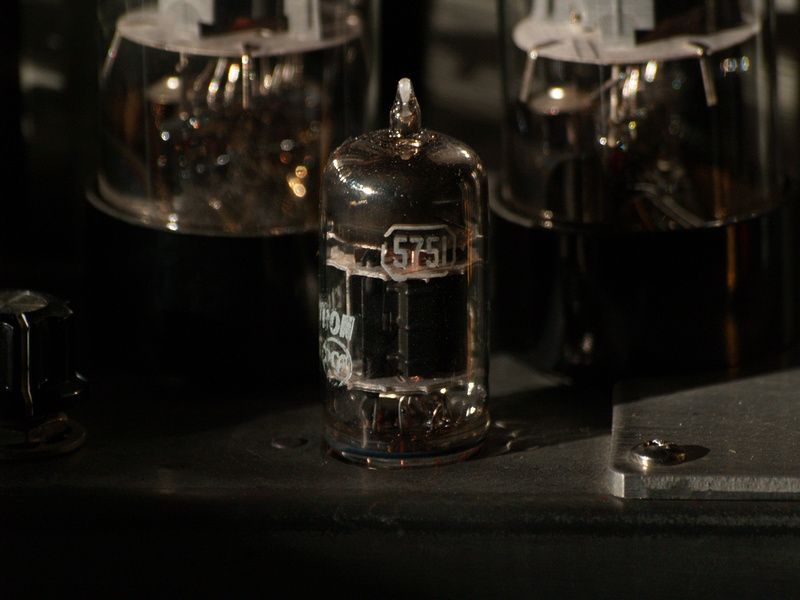 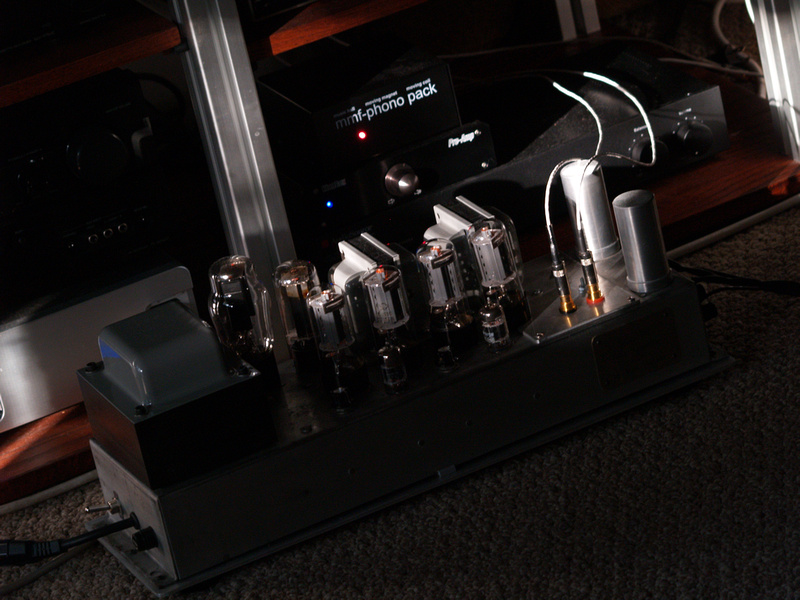 (My wife considers me an expert at evacuating gas, but I think there's always something new to learn.)

(Sorry for being off-topic.)

I had some 6P3S run away. That means, they had gas.

Clean tubes have higher negative potential on the grid than supplied from bias source, due to electron cloud. Gassy tubes have lower negative, or even positive voltage drop on a grid leak resistor.
•••

Thanks Wave! Likewise with your amp! Nice and colorful.


BTW, under close inspection just a few minutes ago, I noticed that the blue haze not only nearly covers the entire sides of the tubes, but also pulsated with the music as well as intensify as the volume gets turned up. I'm assuming this is normal?...

I'll see if I can get some good pictures in complete darkness and post them up in a few.
•••

Here's the pics I promised. Not too shabby for an ancient old Olympus E300 DSLR! 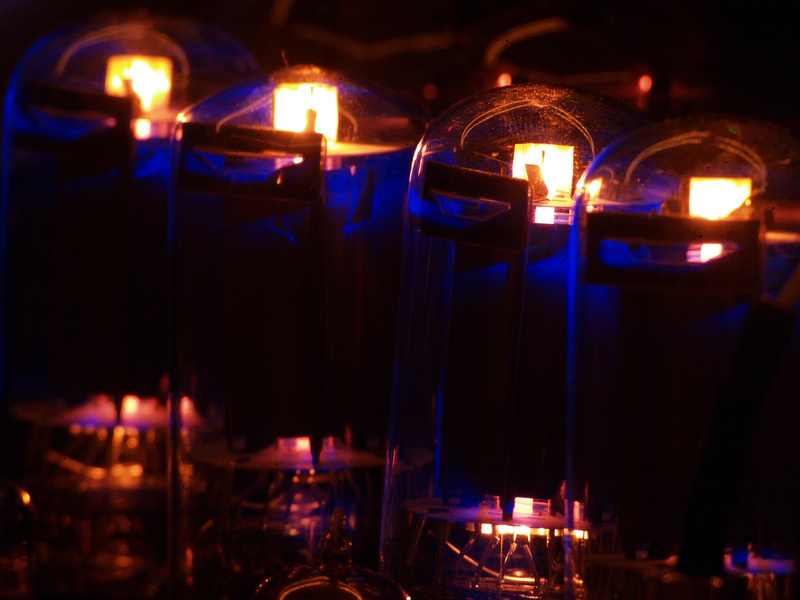 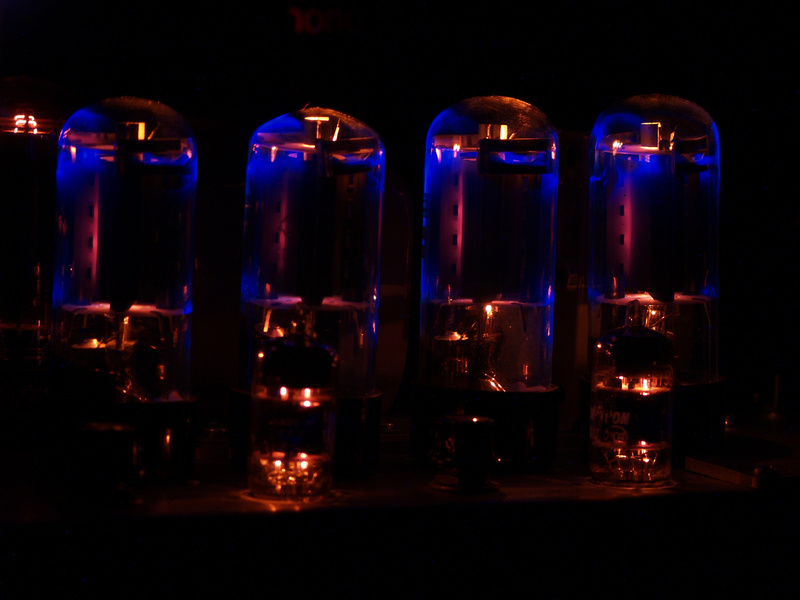 Nice shots! Those last two would make lovely desktop photos. Do you have a high(er) res version you could email me?

Since you begun a slide show, I add one 6P3S-E pic of mine:

Here is my 6П3С-Е prototype: