This has been in the works a while. At the request of friends (and a few critics) I've designed my own portable/desktop amp--The Objective2 (O2 for short). I just published the third and final main article to my blog.

It's a very objective approach (what would you expect from an electrical engineer?) at a low cost "one size fits all" headphone amp. The goal was to show how much performance is possible on a limited budget. It's designed to outperform even far more expensive desktop amps using solid engineering rather than audiophile designer parts or mythical topologies.

For now it's a DIY amp but it's a free open source design and a few commercial companies have already expressed an interest in offering it in various forms. Some have called it the spiritual successor to the Cmoy but the performance is in an entirely different league (sorry for not being more modest!). Some highlights:

* Enough output even for difficult headphones like the full size HiFiMan Planars and 600 ohm Beyers (7 V RMS and lots of current). It will drive nearly any headphone from 16 - 600 ohms to "live" levels.
* Completely silent even with the most sensitive BA IEMs (zero hiss with 131 dB S/N )
* Near zero ohm output impedance (0.5 ohms)
* Very low distortion of any kind--some tests push the lower limits of my dScope audio analyzer.
* ~8 hours battery life for the normal version & ~ 30 hours for the low power version
* Indistinguishable from Benchmark DAC1 in blind listening tests
* Switchable gain for use with different source/headphones
* Unique battery rundown protection
* DIY friendly, self contained on a single PC board, no surface mount parts
* Designed for a rugged inexpensive all aluminum case with a pre-made customizable front panel available.

And, perhaps the best part: You can build the fully functional self contained PC board for around $30 in parts with everything but the bare board available from Mouser.

The performance of this amp, as measured on professional instrumentation, genuinely rivals the well regarded headphone amp in the Benchmark DAC1 and is significantly quieter. It also beats every other amp, overall, I've ever had on my bench--especially its closest competitor the AMB Mini3.

I welcome feedback on the project and hope it develops into something worthwhile. I'm not looking to make any money from it in any way. Here's the link to the final article which has links to the earlier information as well: 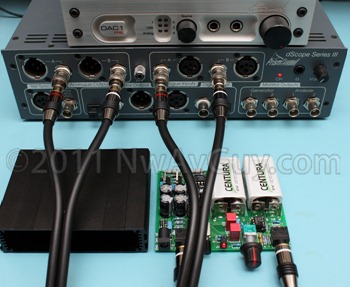 The above article is the best place to start but there are two more articles, a Wiki and some Google Docs files as well.
•••

hang on, it beats everything youve had on your bench, yet its closest rival is the mini3 an amp that you publicly rubbished for its poor performance?
•••

qusp said:
hang on, it beats everything youve had on your bench, yet its closest rival is the mini3 an amp that you publicly rubbished for its poor performance?
Click to expand...

I believe both statements are true and not in conflict. I can't help it if the Mini3 doesn't perform as promised but why isn't it otherwise close competition?

Do you know of another reasonably priced DIY portable headphone amp that's an overall closer rival to the O2?
•••

ahh ok, the way your amble is worded and the use of the dac 1 headphone amp as a reference, did not really leave me thinking you had a limit on budget, or size for this comparison or position of superiority. in that case i dont know one off the top of my head, but i'm pretty out of touch in that sector
•••

No worries. I just happen to own a DAC1 making it a handy, um, "benchmark" to compare things against. It's also fairly well known and has been widely reviewed professionally so most people know what you're talking about. I agree it's otherwise kind of an apples-and-oranges comparison as it's a high-end desktop headphone DAC.
•••

RS - do you accept complements? Clearly this is good work. I would use the term professional.
•••

Thanks firechief! I'll take any and all kudos! And while you might say "professional" others fall asleep reading some of my articles or their eyes glaze over. I'm still trying to improve my writing and presentation skills and have a ways to go.
•••

there was a pretty impressive and very compact Japanese, or Korean language only lion powered and predominantly smd project posted on head-fi about 6 months ago that looked pretty spiffy. it was posted in the general portable amp forum and not diy area, with no schematic and they didnt export kits due to the fact lion cannot be shipped by air easily, if at all. i'll see if i can search it out, but it might not be terribly accessible for you to test or build for comparison.

I must say of its type the power supply in your amp is pretty cool. i dont always agree with your method or agenda, but the science is sound. i do also think that mostly you dont intend things to come off quite the way they do, or in the spirit that they seem to; perhaps linked to the writing i dont know and then things seem to get out of hand due to ego on both sides. just an observation, not a judgment.
Last edited: 2011-08-04 7:25 pm
•••

I'd be hesitant to publish a Li-Ion project as the dangers are substantial (search for "LiPo Fire" on YouTube for some entertaining, and often sad and very expensive, pyrotechnics). There are even documented cases of cheap eBay cell phone batteries burning cars to the ground because they caught fire on the passenger seat.

The power supply is a huge part of the O2's low cost performance. A real ground always beats a virtual ground. And the half-wave AC supply might seem "cheap and dirty" but properly engineered it works as well as any other AC power supply in this application. The proof is 131 dB of S/N and 0.0009% THD on battery or AC power.
•••

one thing, i havent looked up the part numbers for the opamps, because actually its not that easy to read them in the parts list linked to the google docs (pita to navigate too with no quick keys, even space bar doesnt work to create a hand to move the page when zoomed in) but just wondering, i assume the opamps you have used are limited in bandwidth? having a pretty cheap pot in the middle of the feedback loop for volume control doesnt cause any issues with stability?
•••

yeah i know all about the battery issues and comedic videos, just check out the RC forums, ive just started finishing up a lifep04 powered psu for a personal project with charge monitor for low voltage shutdown etc,(not so bad and actually pretty safe, but still subject to the save airfreight limitations as it hasnt been classified on its own, just comes under lithium chemistry)

lion is the worst (but its just so compact with high energy density its appealing), followed by lipoly, but its still manageable with the correct systems in place for protection. possibly still risky for diyers of varying levels though i guess
•••

The volume pot is NOT in the feedback loop. Each stage uses local feedback.

There should be a "-" and "+" button on the left side of the Google Docs viewer. Click the "+" button to zoom in as much as you want. Unless you're using some really weird browser it should work fine.

You can also just download the PDF and use whatever PDF viewer you want.

The gain stage op amp has GBW of 27 Mhz. The output op amps have a GBW of 8 Mhz. They're almost eerily close to the ideal of "fast enough" without having excess bandwidth to create stability issues.

In the first article I show the 10 Khz square response into capacitive loads--there's zero ringing or overshoot. None. I've tried to invoke instability and haven't even seen any hints.
•••
P

I can't seem to access the documentation package. Google reports "This service is not available"
•••

cool ok, fair enough, at a glance thats how it looked, maybe there is something up with either the pdf, or the viewer on google docs at my end because it wouldnt redraw when i zoomed in, just remained kinda half blurry and aliased, thus not being able to read part numbers or have any patience at all haha. i'll download it and have a look tomorrow. yeah was just asking, given your history i couldnt picture you publishing anything unstable for public scrutiny, but given the inability to read it i thought id ask.

ah IC, had a bit more success, i was reading it wrong, so the pot is wired as 2 shunt volumes in (well on the edge of each) the feedback, loop, but with no feedback currents flowing through the resistive element (only returns),

paulb said:
I can't seem to access the documentation package. Google reports "This service is not available"
Click to expand...

Hmmm... way to go Google! I've had random problems with Google Docs which is sort of amazing when you consider they want companies to run their entire businesses on Google Docs and Google Apps.

But, that said, I just checked and it works for me. Here's the link:

yeah its being really buggy, could be safari or something, dunno, this is what it looks like here and it doesnt improve when i zoom

no excuse for not seeing the separate local loops though, guess i was just seeing what i expected to see, some global feedback.

When I use the Google Docs viewer it takes a second or two after you zoom in to download the hi-res version. Perhaps Australia is connected to the USA via dialup?
•••

RocketScientist said:
And the half-wave AC supply might seem "cheap and dirty" but properly engineered it works as well as any other AC power supply in this application.
Click to expand...

I was wondering about that and just (LT) Spiced it. Linear Tech's model base is pretty devoid of negative regulators so I've substituted in a couple of 100mA units and lowered the load.

Looks good, but 1.9A diode charging current and that's with reduced load... would 1N5402 be more appropriate or am I missing something?

Good work, BTW. I'll have to echo qusp's comments about not particularly agreeing with your method or agenda, especially as relates to AMB's mini^3, but you've clearly put in a boatload of work here in actually making an amp and writing it up, rather than just reviewing others. I'm impressed that you open source licensed it, too. Looks like a good solid original build.

agdr said:
Looks good, but 1.9A diode charging current and that's with reduced load... would 1N5204 be more appropriate or am I missing something?
Click to expand...

The 1N400x diodes are rated at 30 A of peak current for a half wave cycle (8.3 mS) and don't even get lukewarm in this application under worst case conditions. I don't think it's a problem unless I'm missing something? The diodes are running at 1.9/30 or 6% of their rated current.
•••
Show hidden low quality content
You must log in or register to reply here.
Share:
Facebook Twitter Reddit Pinterest Tumblr WhatsApp Email Share Link
Top Bottom