The Boominator - another stab at the ultimate party machine

Hofmann said:
My experience with separate preamps or bluetooth modules sharing the same power supply has only been dissapointing.

I recently bought 2 of those exact modules just to see how much I can improve them. They have not arrived yet.

I have a dual mono version of different tpa3116d2 where I swapped out the power filter caps. It had 5x 470uF which I swapped for 2200uF. The difference was in sound quality was huge, but I doubt it'll do much for the overal volume.
Also since they only act as a power buffer to filter out ripples and such, I'm not sure how much it even is applicable when using a battery and sort wires.

As a disclaimer I barely know enough about electronics to have the right to hold a soldering iron.

In my halfinator I find that the 1x 100w Wondom board requires no preamp.
Click to expand...

Hofmann, what do you think of this amp from Wondom, the board has a lot less going on, but from what I can see it has all the same features with the addition of DSP control via Wondom's app.
•••
H

That is a subwoofer amplifier. I also have that amp in a small home sub project. It features an adjustable low pass/ band pass filter specifically for subwoofers. You can override that with a dsp programmer but that you have to buy separate. Wondom also has a 1x 100w programmable dsp version with Bluetooth without the pre programmed filters.

Yes, that was is currently out of stock in France and is DAB2, which means it isn't compatible with the Wondom DSP phone app, from my understanding. Shame as the app DSP control is a nice feature!
•••
E

Hofmann said:
That is a subwoofer amplifier. I also have that amp in a small home sub project. It features an adjustable low pass/ band pass filter specifically for subwoofers. You can override that with a dsp programmer but that you have to buy separate. Wondom also has a 1x 100w programmable dsp version with Bluetooth without the pre programmed filters.

Since the DSP can also be programmed by the free app in this version, presumably no need to buy a DSP programmer? Have you tried reprogramming the DSP for a normal speaker setup? Have you tried the wondom DSP app?
•••
L

The DSP programmer makes it wireless, so you need it to connect with the app
•••
E

Ran the halfinator on my 19.8v 6s3p lifepo4 18ah home made battery at a party the other day. Playing bass heavy music non stop at normal party volume (not crazy party/max volume) for 10 hours, voltage dropped from 20.05v to 19.95v which I estimate to be less than 10% of the run time.

I think I went a bit overkill with the battery.

A normal 6s would have been adequate. 6s2p for those that really need the extra capacity. 6s3p is about 3kg of battery, almost 10% of the speaker weight and I don't think I'll ever be in a situation where I need that much capacity.
•••
A

Hi all - I am doing a bit of clean up and wanted to see if anyone was interested in a set of drivers (PAudio mid and tweeter) in the USA. I have at least one set to sell and might part with two sets.
•••
E

Hi, I recently did a bit more work to my speaker in my quest for perfection. I added a Bluetooth receiver. I'm getting considerable hiss where before I was getting virtually none. Makes listening at low volumes indoors very annoying. I suppose I need to just try a new Bluetooth receiver or failing that an amp with built in Bluetooth? Thanks!
•••
P


Been looking and trying to understand a topic i dont really understand. Been reading hundreds of pages picking up tups and taking notes.

But as aways have a few questions i cant get my head around.

I want to build a Boominiator Micro and during the time from reading and deciding to go ahead the MaxAmp20 is no longer available, unless i missed somthing. I read that no more than a 15w amp per channel should be used.

The mini uses a filter on each channel of the amp going to the four drivers on each side. On the diagram dipicting the micro it has a filter going to just the one set of the drivers.

1-Does the micro require two filters, each filter to its own set of drivers, front and back, on each channel of a stereo/dual amp. I would have thought it would have a mono amp and one filter going to all four drivers.

2-what would be a good amp to use on the micro, or a source of the maxamp

Be great of someone could help clear this up for me

My halfinator build. Started with some CNC cut ply, we got the sketch up design a bit wrong, but managed to make it work.

I also made my own custom battery with built in BMS. The cells were cheap LiitoKala LiFePo4 cells advertised at 7ah, in reality they push out 6ah, which is still excellent. In 6s2p, the battery is 12ah 19.8v. An alternative I considered was removable batteries Turnigy 4500mAh 6S2P 30C LiFePo4 Pack, but I'm happy even though my battery is almost 2kg. 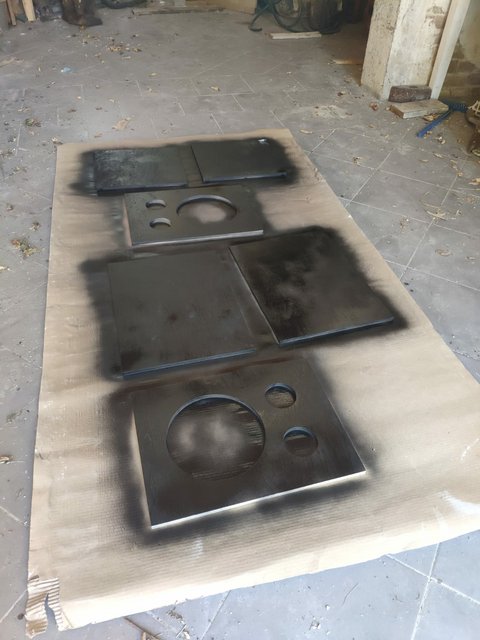 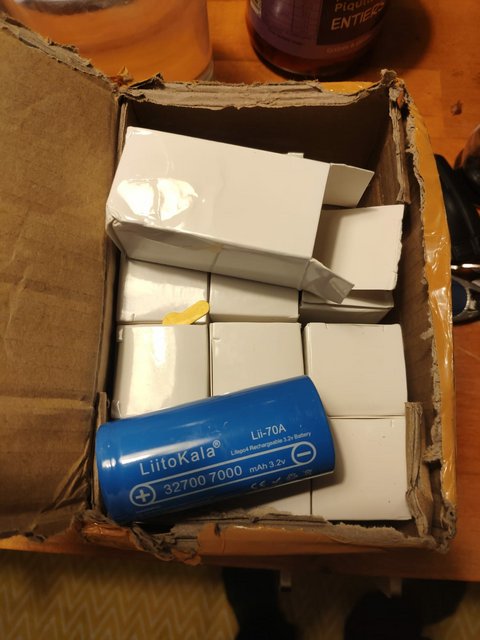 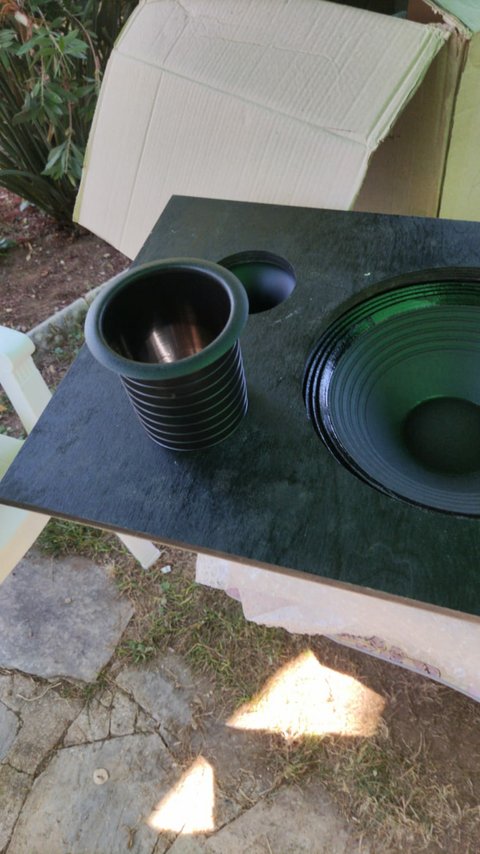 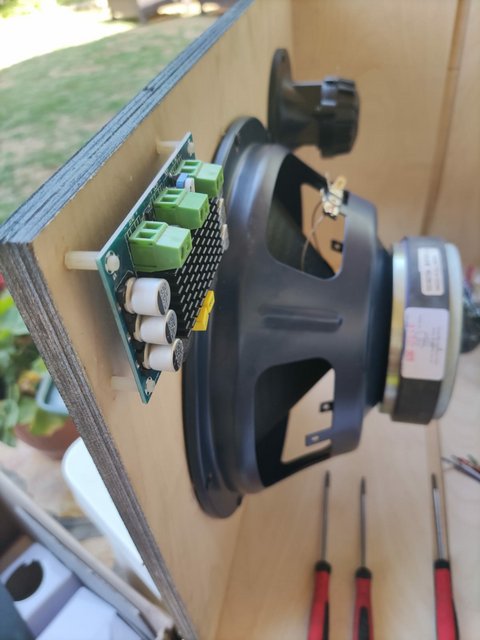 I cheaped out on the amplifier with a 100W TPA3116D2 and added a separate bluetooth receiver board, actually I tried to make the whole thing as cost effective as possible with many parts ordered from AliExpress. The amp isn't great, after summing the input to mono, the gain seemed to drop, I also don't think the amp can handle top volumes. For normal indoor listening the amp was still extremely good for the price. There is pop and since I added the bluetooth there is hiss too.

I have now got hold of a Sure Electronics / Wondom JA31182 on Hofmann's recommendation and will install it soon. I'm hoping this will be a big improvement. 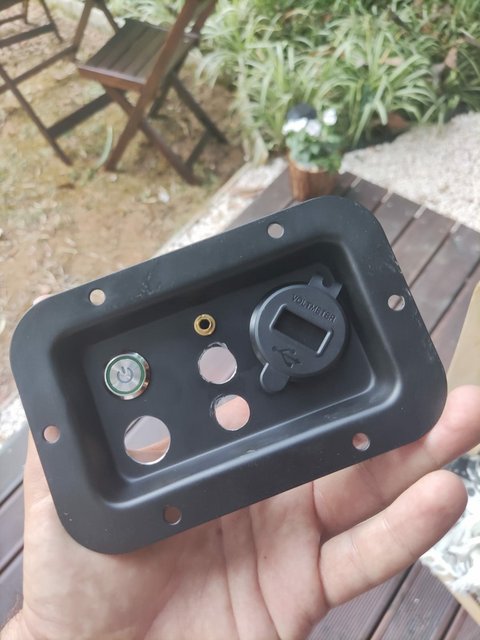 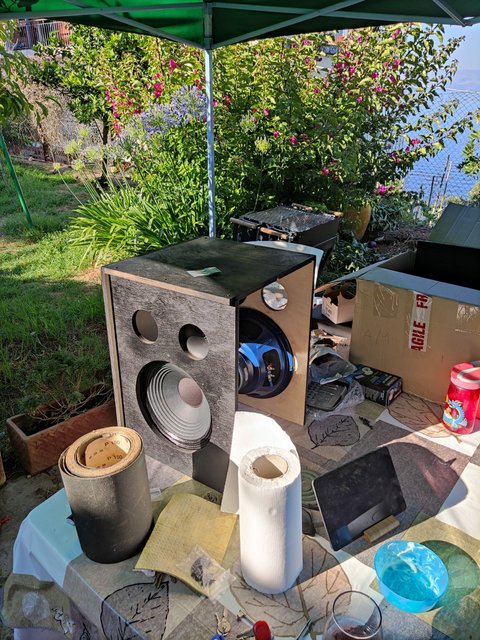 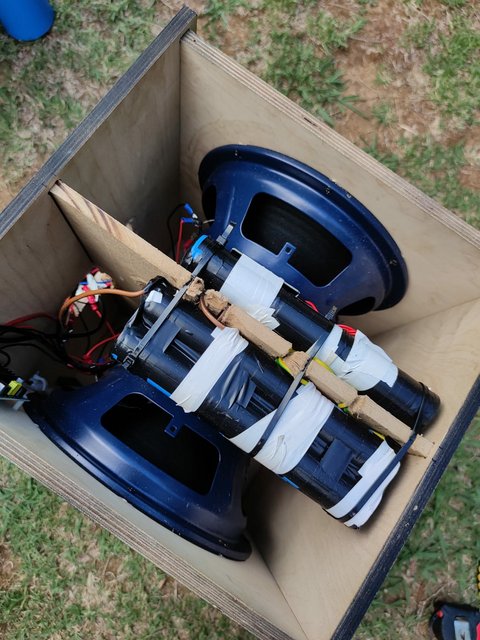 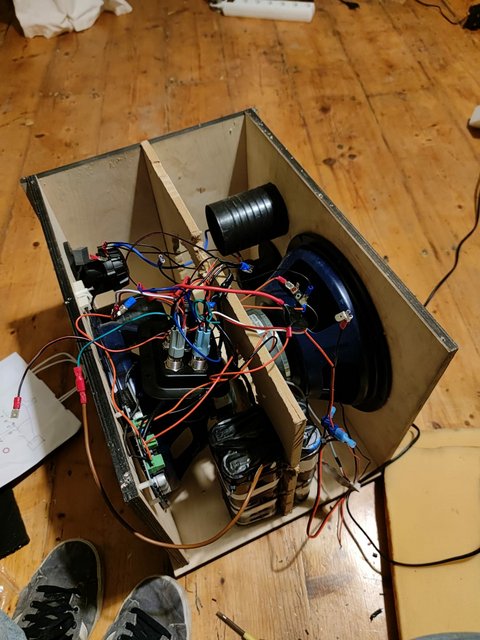 Messy wiring as the speaker was taken apart and put back together for testing and adding bits. 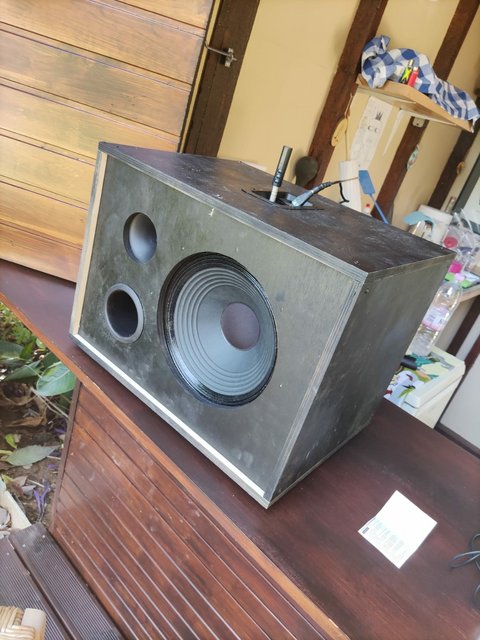 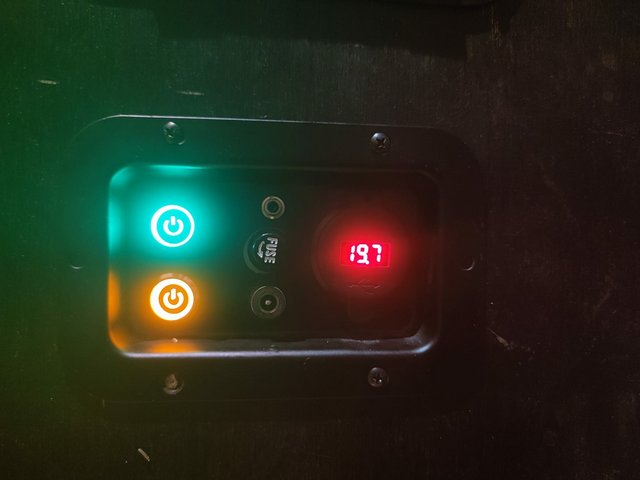 Fused, two power switches to isolate battery for charging while powered off or running directly off mains power. The Wondom board would negate the need for this, as it can handle battery charging, but I will probably still keep things as they are. 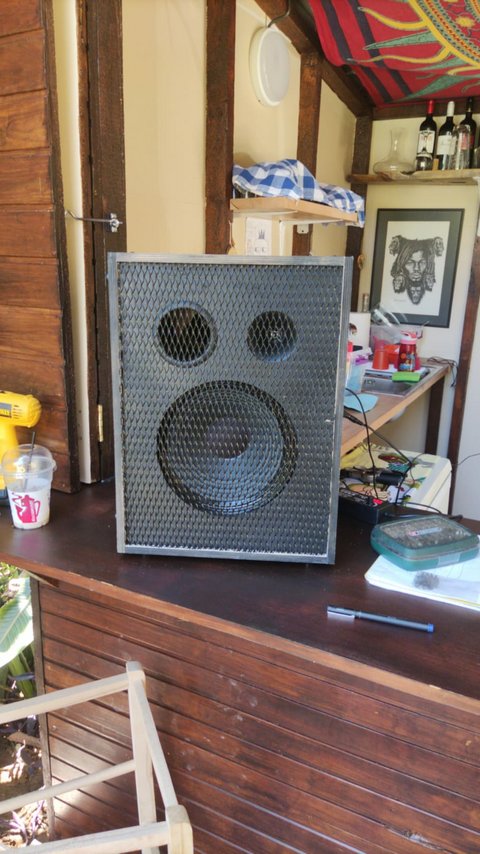 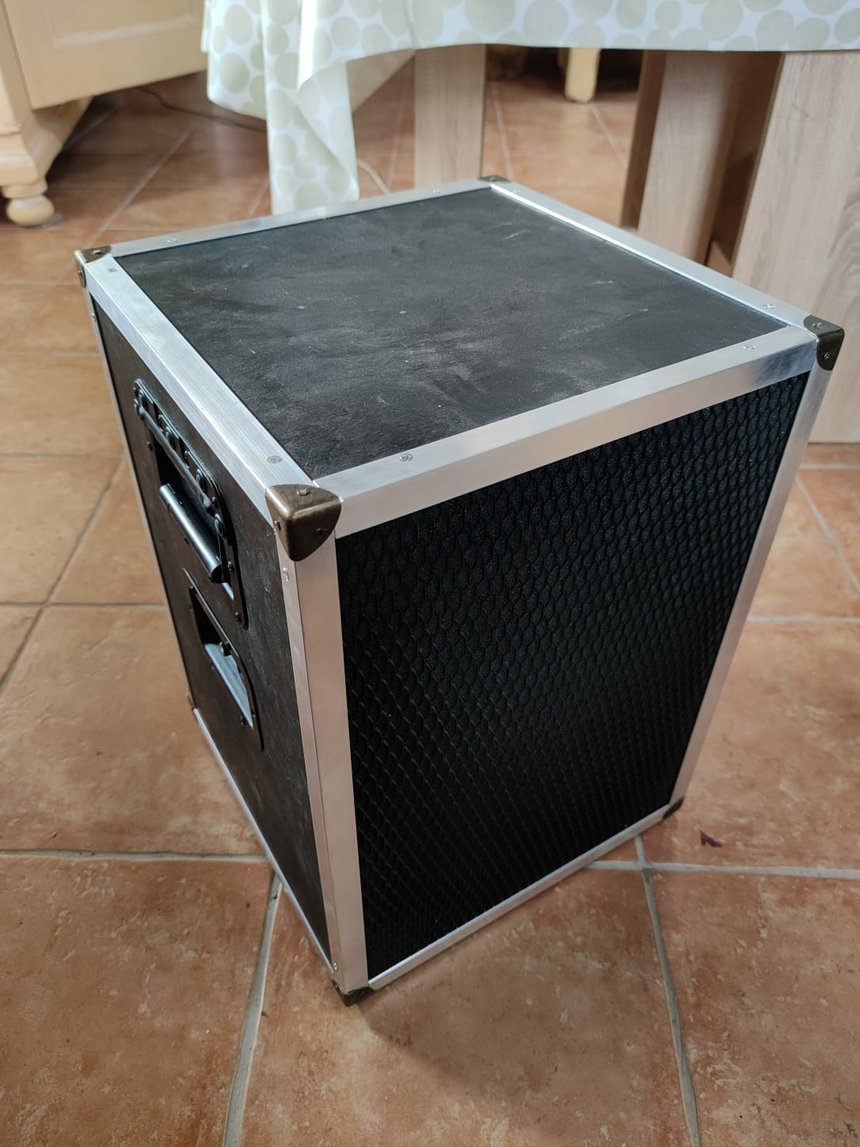 Happy with how the final thing has turned out, aluminium edge trip, acoustic foam and black grill to give the speaker some extra protection from bashing and some splash resistance. I just wish it was a little lighter!
Last edited: 2021-01-20 3:36 pm
•••
L

Thanks! They hold the grill and foam in place, that was one of the initial reasons for them, but actually they are both very functional and make it look a little bit more complete.
•••
C

nice, looks good. yea that sure amp i think will be quite a upgrade from that super cheaper pbtl tpa3116 amp.
good to see lifepo4 used. got a 4s1p lifepo4 ready made batt in 7ah lead acid style plastic case. for 30GBP(before brexit/import tax and fees rules change) in the post. i think i uses the same size cells. looking forward to it.

i expect your lifepo4 batt a lot better than hobby king lipo, mine had a cell die after a 1-3years. waste of money.
•••
E

Yeh, I went totally overkill with my battery. It plays for days and days. If I were to do it again I'd just use a 1p like you.

Wasn't going to be using it for a few months at the end of summer so wanted to run the batteries down a bit and store them half full, in the end I resorted to charging a few phones. haha

Not that I need the speaker to be more efficient, but presumably I could remove my passive crossover now and programme the DSP instead as a future project? Should I try this? Will I see enough of a difference to make it worthwhile? Or should I just call it a day and just enjoy the speaker as it is?
Last edited: 2021-01-20 4:30 pm
•••
A

Nice to see some activity on this thread and a nice build to boot. Re: batteries, it is truly amazing how long they last. I run a 2.6 AH 6 cell lipo and only charge it a handful of times per year.

And, while I am writing.... Later this year I will be moving and am inclined to sell some drivers for the boominator standard and mini (NS6) and I have a couple of mini (again NS6) cabinets amp and tweeters (used, extracted from my boominator mini) too. If you are interested drop me a PM or send me an email at my user name @ googles email service. Located in USA.

Thanks! I'm planning another build, so if I wasn't on the other side of the world, I'd look at buying something. Hope you find someone interested!
•••
D

Does anyone have a current purchase list, with drivers, amp, batteries and electronic components for Europe?

Cost is not the issue, (but aiming to keep it reasonable) it is the availability of components, and a concise list.

aterren said:
Nice to see some activity on this thread and a nice build to boot. Re: batteries, it is truly amazing how long they last. I run a 2.6 AH 6 cell lipo and only charge it a handful of times per year.

And, while I am writing.... Later this year I will be moving and am inclined to sell some drivers for the boominator standard and mini (NS6) and I have a couple of mini (again NS6) cabinets amp and tweeters (used, extracted from my boominator mini) too. If you are interested drop me a PM or send me an email at my user name @ googles email service. Located in USA.
Click to expand...

I am moving soon and would really like to send a few boominators off into the world. Any interest in cabinet, drivers, etc?
•••
L

To add to that, if you need a good amplifier, my 4-channel DSP/BT amp just went on sale for the coming days:
ZOUDIO AIO4CH: 4-channel amplifier with DSP and Bluetooth