I have 4 - 6.5" drivers but only room for two rather small cabinets. Any chance of making this work?

I can't figure out why more people don't go isobaric with tapped horns.

The primary limitation on subwoofer output is xmax (as long as you have enough power.)

Isobaric loading is kinda pointless for front loaded horns, because the back chamber is so small already, but in tapped horns, BLHs and vented boxes it makes a lot of sense.

Note that you don't have to do them clamshell; there are ways to mount them in a tapped horn so that you can still keep S1 very small. (Basically put a piece of wood there that couples the face of the two cones together.)
•••

Thanks for the quick response. Good to know. I couldn't see why not but I'm pretty low on the speaker genius ladder. I like the idea of making them small [read WAF] and yes, the coupling of the drivers would likely be on either side of the baffle piece rather than actual clamshell.
•••

I don't see a design program for tapped horns on a mac. Here's the driver specs, can someone plug the numbers and give me a horn that is approximately the simple shape shown in the fist pic? I think tuning it to 50 Hz is probably low enough?

I would appreciate that greatly.

Cal Weldon said:
Thanks for the quick response. Good to know. I couldn't see why not but I'm pretty low on the speaker genius ladder. I like the idea of making them small [read WAF] and yes, the coupling of the drivers would likely be on either side of the baffle piece rather than actual clamshell.
Click to expand...

1) Vented boxes, tapped horns, and BLHs have a lot in common. A BLH and a tapped horn with the same volume and length will have nearly the exact same response.

2) If you don't mind the wonky group delay curve, a vented box with a really big vent can rival the output of a tapped horn of the same footprint. Obviously, if the tapped horn is bigger it's generally going to have more output.


The thing I find compelling about the isobaric designs is that power is SO CHEAP right now. I can buy a 4000 watt amplifier from Wal Mart and have it delivered to my doorstep for under $300. With that type of power on tap, ten cubic foot horns start looking kinda silly.

The drivers are now in a bipole ported enclosure. I was hoping by running the isobaric I could halve the size of the cabinet and conceal the drivers.

I really don't need anything more. I have loads of amps, loads of speakers, I just want to downsize the ones on the TV in the kitchen area to make them look better and save a little room.
•••

That's small compared with some of the crap I have.
•••
G

I also don't understand how xmax comes into play since each driver is being driven by exactly the same power that it would receive in single driver cabinet? Does the reduction in cabinet size have some affect on the xmax?

Also, to model in hornresp, assuming that the horn dimensions allow for two drivers, do you simply halve the vas, recompute cms et al., and adjust the DC resistance and impedance according to how you wire the drivers?
•••
T

This driver is not suited to vented enclosures (Qts=1.081), and the Sd indicates a size of about 5.5", I would guess at a relatively small Xmax . Just stuff them into a 1cft sealed box if you want to try them isobarically.

Anyway, here it is in Hornresp, TH isobaric pair:

- enter the driver as you normally would, and
- under Edit - Driver Arrangement select Isobaric, and however many isobaric configurations you want Hornresp to use, e.g. 2 iso pairs in series with 2 parallel branches.

Hornresp will do the calculations for you.

Isobaric loading makes sort of sense in some TH sims.
I wonder how compatible it would be with the Cubo bandpass/TH cab.
At least the drivers would fit no problem and would be very compact!
•••

A quick trip home and tb46 has this done for me. Thank you. So tapped horns are like others in that a high q driver is not suited. OK, that's why I have to semi-plug [aperiodic] the port even in an oversized repurposed box. If you look at the pictures in the link you can see why the sensitivity is so low on that woofer. Not a lot of coil sitting in the gap.

Here's the easiest way to visualize how the isobaric tapped horn will provide more output:

We know that the box size of a VAS config can be halved. But another option is to use the same size box, with four woofers.

In that configuration, we'll have the following advantages over the same box with one woofer:

1) Due to the fact that we have four voice coils, the amount of power going into each coil will be reduced by 75%. YES it is true that our efficiency rating is exactly the same for a four woofer isobaric versus a single woofer setup. And that may seem like a criminal waste of money. But a 75% reduction in voice coil power is significant.

2) Due to the fact that we have twice the cone area, excursion is halved for the same SPL level.

Combine those two things together, a reduction in displacement AND a reduction in voice coil heat, and you have a recipe for a MONSTER of a tapped horn.

Or, better yet, split the horn in half. Instead of using two isobaric pairs in one cabinet, use one isobaric pair in the cabinet, and put the other sub somewhere else in the room. You'll still enjoy all the advantages of isobaric, and you'll also get the benefits of the Geddes multi sub approach.


You can model all of this in hornresp by the way; just take a design, copy it to a new page, and substitute two series-wired isobaric woofers wired in parallel for the single woofer of the original design. 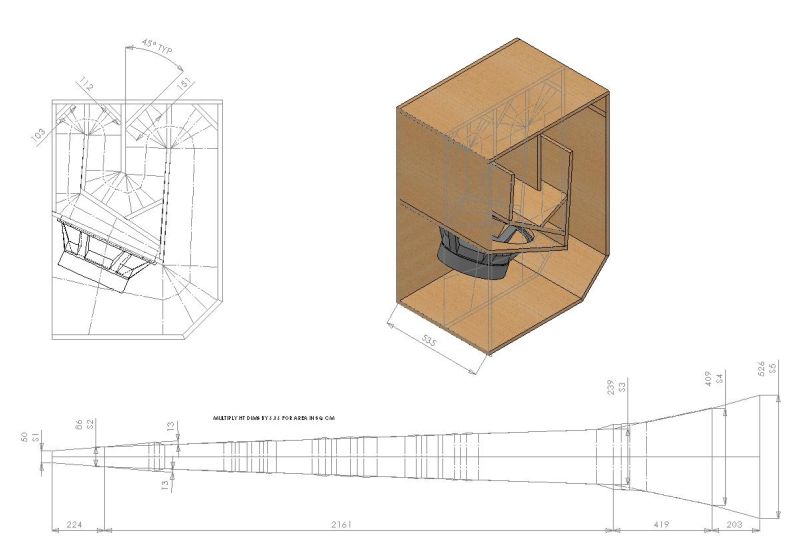 This is XOC1's TH, as documented on this forum 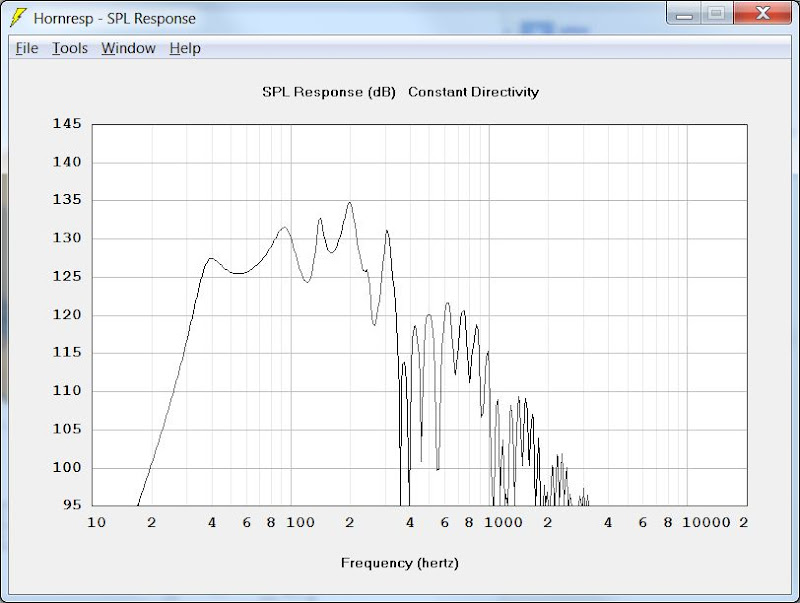 Here's the output of the XOC1 sub, with 1000 watts into 4ohms and a B&C 15TBX100 woofer. But we can't hit that SPL, because we're displacement limited. 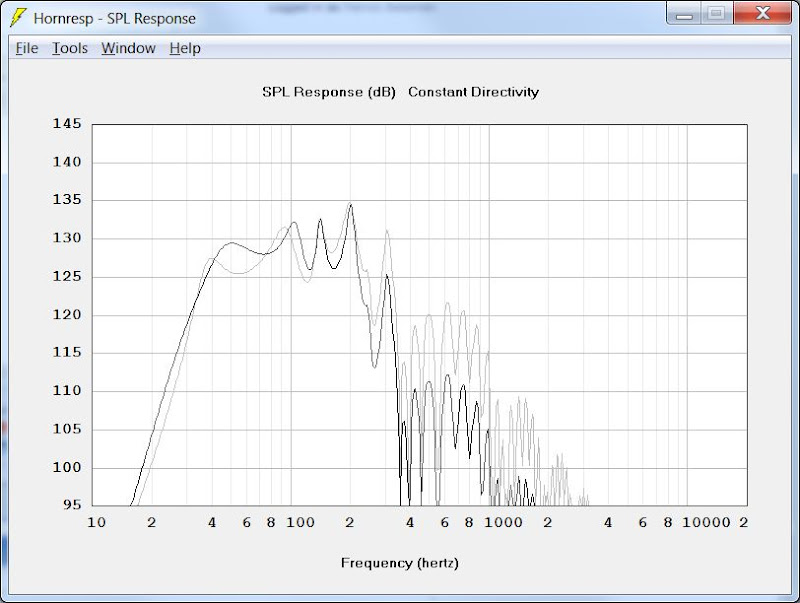 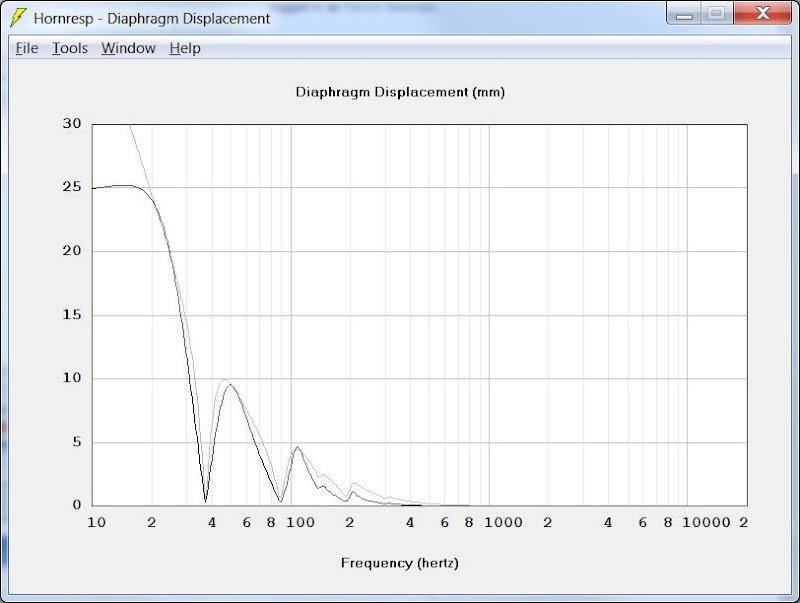 Now let's have some fun! 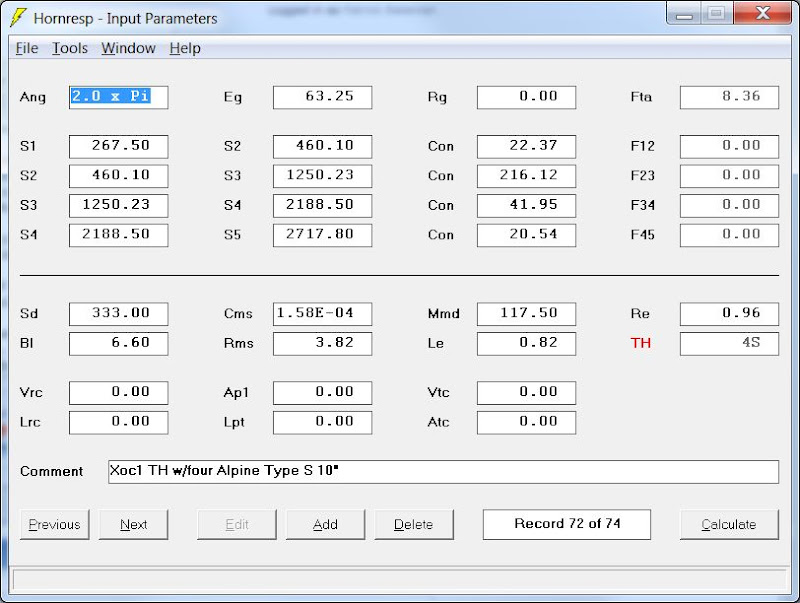 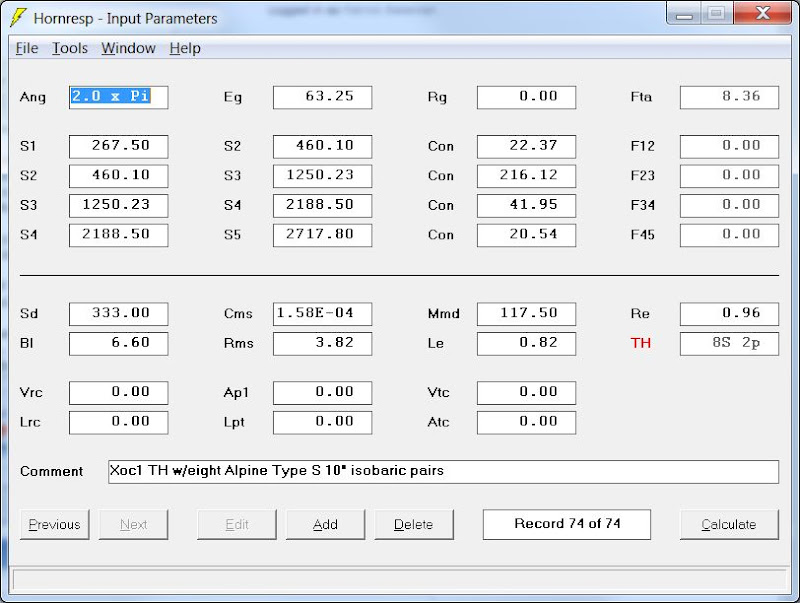 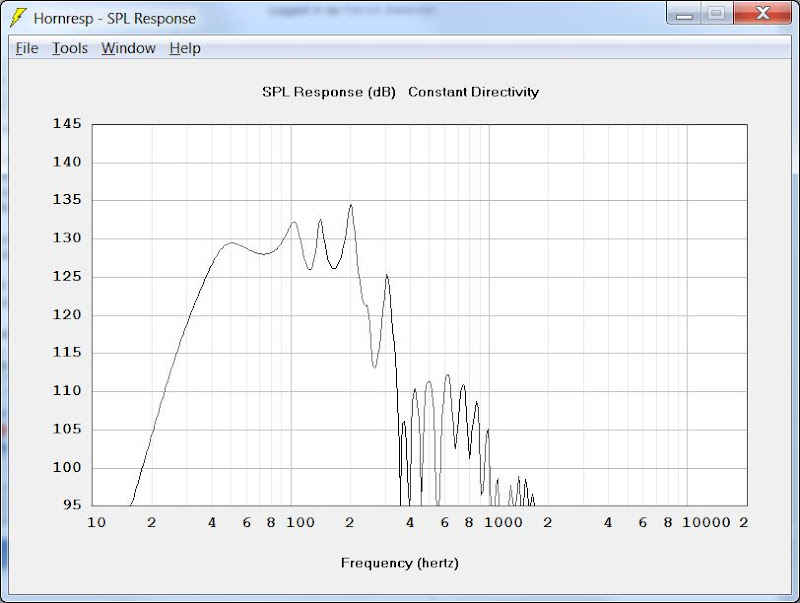 Here's the frequency response.
Yes, it's exactly the same. 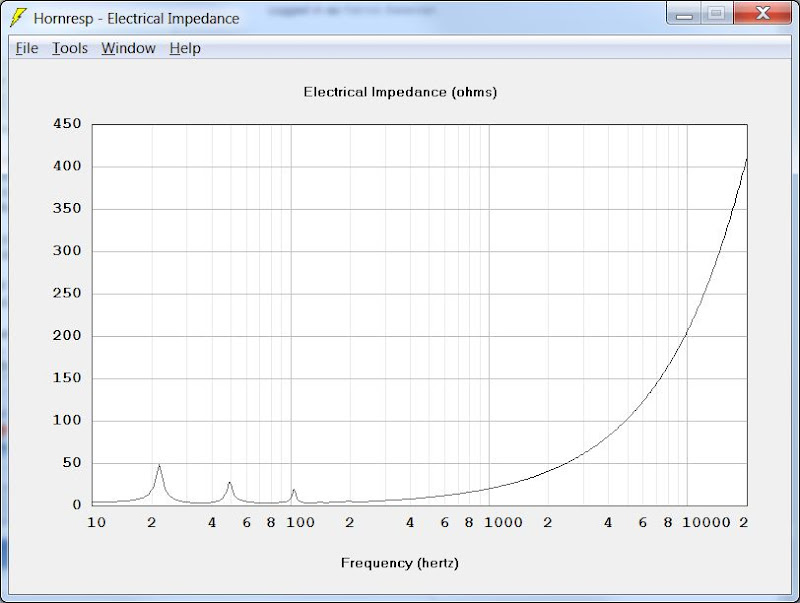 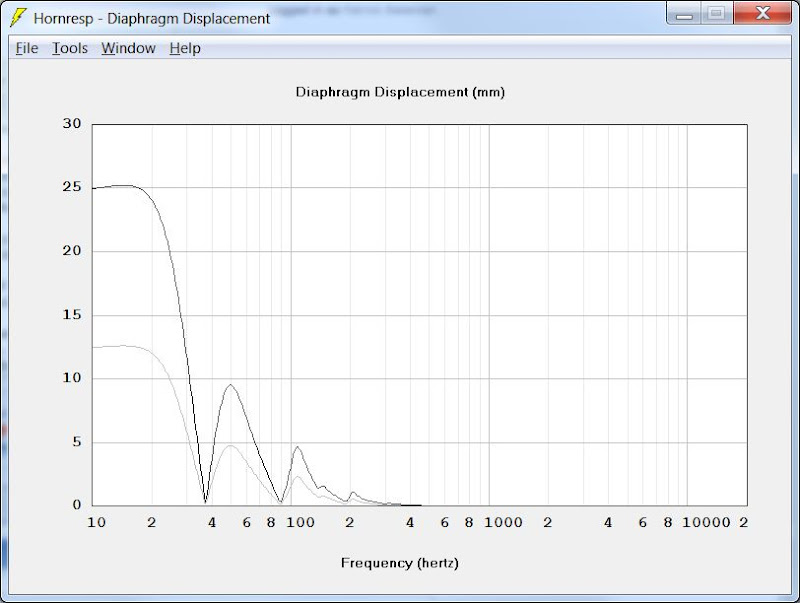 Ah, here's the money shot!
The isobaric box has half the excursion. And since subs are generally limited by displacement, that means the isobaric box will get louder than the conventional box, as long as you have enough power to get there.

The icing on the cake is you have four times as many voice coils. So thermal modulation and thermal compression will be dramatically reduced.

Of course, this box is completely unnecessary if you don't have a big amp to drive it
The Behringer Europower amp would be awesome on this. 4000 watts into this box works out to 250 watts per voice coil, which is well within the Alpine's limits. Heck, you could probably halve the box size, use half the woofers, and dump 500 watts into each one. Eight of the Alpine tens and one of the Behringer amps would cost about $1100. (Amazon and Wal Mart have the amp for $275, and the Alpine woofer is readily available for $100 at various retailers.)

Now, obviously it's going to be a bit tricky to squeeze sixteen tens into this enclosure

A couple of options: 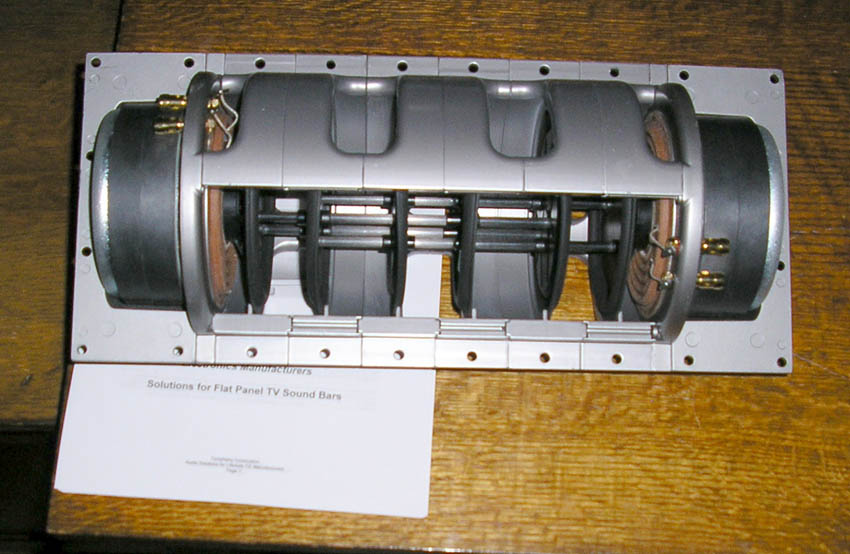 You could mount the drivers like the Tymphany LAT

You could double the length of S4-S5


Obviously, the tens are 'home theater friendly' because you could take XOC1's box and halve the width. So instead of being 21" wide it would be 11.5" wide.
•••

Isobaric loading does not cut excursion in half. You are coupling the drivers together and utilizing only the effective SD and therefore displacement of a single driver. The positive cycle from one and the negative from the other. You actually need twice the driver displacement for the same output of a single conventional mounted driver.

If you are utilizing the displacement and SD of all of the drives then it is not an isobaric alignment. That would be just loading more drivers into the system.
Last edited: 2013-02-09 1:37 am
•••

Punch my numbers into hornresp; they're in the pic above.

Here's an example:
1: one woofer in a 56L box, with an efficiency of 90db and a maximum SPL of 110db
2: the same woofer in an isobaric pair. Efficiency has dropped to 87db, but max SPL is the same. (This assumes that maximum output is limited by xmax)
3: add another cab, for a total of two isobaric pairs, and your maximum output will be 6dB higher than a single woofer.

I dont get it...You just confirmed my point exactly. Maximum displacement limited output is the same as with one driver.
•••
D

Patrick's right. For the same enclosure volume, at the same excursion per driver, you get twice the displacement, 6dB more output.

Patrick,
One slight problem with isobaric driver setups is that they aren't perfect. The models assume that the two cones are rigidly coupled, whereas there is actually a compliance between them. Exporting the above Hornresp simulations to AkAbak and allowing a volume between the cones shows that the driver excursions become quite mismatched at some frequencies. Instead of the expected 6 dB increase in output for 4x the drivers at xmax, you only get about 5 dB because the mouth-side drivers reach xmax before the throat-side drivers.

The diameter of the driver's mouth is 230 mm, and the mouth opening is 24 mm deep. That's about a litre. Add about another half litre for the volume of the cone. Double this because the drivers are face to face. Putting that between the drivers in AkAbak gives the attached excursion for the two drivers. The black trace is the "inside" driver nearest the throat.

Still, 5 dB more in the same size enclosure is a lot better than nothing.

Incidentally, instead of modelling the horn with 4x and 16x drivers, I divided the horn areas by 4 and used 1 driver and 4 drivers.