I have seen a lot of for / against opinions on the use of a zoebel network on high frequency drivers. In my case, I have a Dynaudio D280 paired with a 17w75 bass driver.

I have checked the numbers on the 17w75 vs 17w75XL and electrically, they are almost identical. This rings true with the difference between the D28-AF and D 280 tweeters (the only "main" difference is between the resonant frequencies of the two drivers).

Anyway, back to the zoebel on the tweeter question: what, sonically, can we expect to gain from this?

I think most people will prefer the sound with the zobel, IF they can hear the difference...

I myself prefer the sound without the zobel...
•••
S

Sonically, as far as the bass driver is concerned, the most noticeable difference is in the top end. If there's one thing I can't stand, it's hot midrange. And yes, absolutely, I can hear that.

... but in the case of the Zobel on the tweeter, what register would you say it affects?
•••

Likely 10k+ tilt is what that zobel it doing. It's not for the impedance, but for the freq response, and takes an edge off by reducing the top-octave a smidge.

I disagree, it's to flatten the impedance curve and both for tweeter and woofer with a view to match 1st order butterworth xovers.

On the tweeter side it' s necessary to help the phase correction network between the cap and the zobel to work correctly.

Btw, all Dynaudio filters use this topology. Of course the design can be cheated, aiming to similar targets, quasi-LR1, or LR2, involving reversing tweeter polarity, crossing -6dbs instead of -3dbs, etc... But these are good and well behaved drivers, and it might still sound ok.

The criss-crossed capacitors around the two inductors in the tweeter circuit form an all-pass filter (delay network). These are sensitive to their load through the passband.
Last edited: 2016-06-20 7:34 pm
•••

Charles Darwin said:
What is that?
Click to expand...

with SEAS CA22RNX and FU10RB drivers. They were combined with 1st order quasi-Butterworth filters, which are 6 dB down at the crossover frequency.
Click to expand... 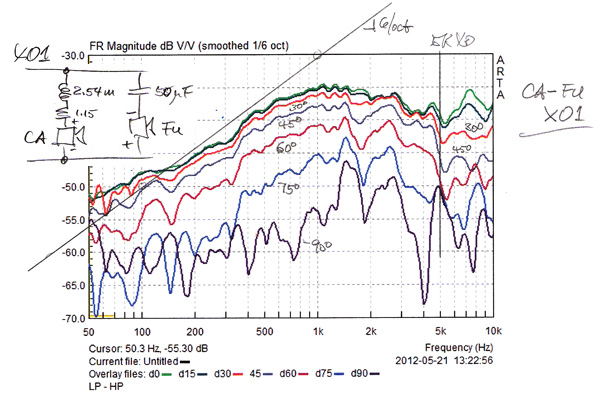 Can be done with any odd order, sum aprox flat only, but not a real issue.

GDO-
I'd really like to see the summation phase for the 'quasi-LR1', as if it's in-phase and not 90 degrees out, then it is still not an LR, but a 'spread-BW1' to get a -6dB on each driver at Fc summation. Also of note that the example you give is really an Fc of 3kHz, and does not have 2 separate xover points.

Now- to the D280 as before (stated to be basically the same as D28AF):
http://www.gattiweb.com/images/dynaudio/d28af_data.pdf

I know Dynaudio uses 1st order summations. There is not a peak in the top-octave as I recalled, BUT- it will still induce a tilt to the top-octave. I use these CR shunts on tweeters often in tweaking the response, and it will reduce the level above the Fc of the cap, as well as change the impedance.

Also of note, the 6.8uF on the tweeter starts its rolloff much lower at a shallow slope, coupled with the inherent 12dB rolloff of the tweeter yields a third order acoustic in most situations. It is also large enough to come into play below the inductive rise. In this case the all-pass ladder delay is actually employed for time-arrival to match up the drivers at Fc. Being that Ladder-delays are not full bandwidth consistent, and tend to target an area of response around Fc, I still feel that the zobel isn't really going to help in terms of time and/or phase alignment in conjunction with the ladder-delay.
Being that it isn't helping the top-octave smooth out either, it's likely a superfluous circuit.

Of course- this is all speculation, as I've not modeled it.

wolf_teeth said:
Also of note, the 6.8uF on the tweeter starts its rolloff much lower at a shallow slope, coupled with the inherent 12dB rolloff of the tweeter yields a third order acoustic in most situations.
Click to expand...

I do not think that the final acoustic slopes really matter, only the range where there is significant overlapping, and crossing at -3dbs instead of -6dbs is the real stuff and the real challenge about these xovers picky like hell...
•••

Did you mean to say wideband phase tracking?

As a point of interest the basic first order crossover offers a consistent directivity index that typical -6dB crossover types don't, but only if the drivers are in phase quadrature.
•••

AllenB said:
Did you mean to say wideband phase tracking?

As a point of interest the basic first order crossover offers a consistent directivity index that typical -6dB crossover types don't, but only if the drivers are in phase quadrature.
Click to expand...

Power response of butt's is interesting indeed, though quadrature phase tracking a real pain in ***...

LR phase tracking is piece of cake for lazy guys like me: chase the null...

About the interest of the -3dbs quadrature stuff...

ShaneF said:
If there's one thing I can't stand, it's hot midrange. And yes, absolutely, I can hear that.

... but in the case of the Zobel on the tweeter, what register would you say it affects?
Click to expand...

It is not in the midrange of course. Dynaudio tweeters can produce HF up to 30k or 40kHz. The zobel behaves as if it rolls-off the HF.

If the recording or the input has problem with HF, you will hear it. Many recordings have problematic HF (depends on your source), and without the zobel your speaker will be more discriminating.

The zobel will make the HF sound cleaner, more snap and "soundstage" too...

What I don't like is the effect as if the excitement or enjoyment or musicality is lost/lessen (no, I don't think the HF or details or distortion is responsible with excitement). I guess this is because the zobel affect the phase negatively.
•••
C

Can be done with any odd order, sum aprox flat only, but not a real issue.

Charles Darwin said:
'Quasi 1st order Butterworth' makes perfect sense but 'quasi 1st order LR' not so much given that LR filters only exist in even orders as they are essentially cascaded Butterworths.
Click to expand...

You basically need to disagree with somebody you think you can, huuu...?

Quasi butterworth for crossing at -6dbs instead of -3ds, and quasi LR for being odd order LRs crossing in phase instead of quadrature, do you catch it now?