What’s On the Bench Tonight (OBT)

Thank you for the detailed feedback. I am very relieved that you also find this pot perfectly ok. I had this guilt feeling using a cheap Aliexpress pot in my Aksa Lender. I really enjoy the convenience and it works perfectly for such a cheap device. I love the fact that it always defaults to the perfect volume setting for my amp when switching on.
So this pot works fine in my preamp, but I have trouble with the Lorlin input selector switch, making scratch noises and sometimes not making contact on one of the stereo channels. Lorlin switches have a good reputation here but I seem to have a faulty one. Want to replace it with a toggle switch.
•••

Cheap audio gear guilt is funny. It’s DIY and whatever works for us and sounds good is fine.

Due to the global shortage of genuine Molex KK connectors, I bought cheap clones on AliExpress and they arrived. They look decent, cost 1/10th as much as real ones, and as Vunce said, “don’t tell Signal you are using fake connectors, he won’t know the difference”.
•••
Y

These have (tamper resistant) holes:
https://www.amazon.com/dp/B07Q21RPS2/ref=cm_sw_r_cp_api_glt_i_DTWJJ0Q5FC6FV7G1ECF2
Click to expand...

Yep, found some right after posting on Amazon by plugging the term 'Security Torx' in the search box. Never thought of doing that because I was under the impression that this was very rare.

I have some really good-looking boxes that sport the Security Torx screws, and since I only have normal Torx screwdrivers, they're tough to open up. There are things to salvage inside, but recuperating the chassis for DIY builds is really nice as well.

Thought of heading to the local hardware store nearby, but snow and dental treatments (ouch!) this week made me just want to head back home and stay in.

Did some more investigations and tests with the Behringer UMC202HD. Some members have devised a few good mods to get the noise floor and THD further down. I may do a couple of those and some of my own and see what happens in a measurable way. From there, I'll use this for further designs. Lugging the Apogee Ensemble (Firewire) into a Lab isn't practical, and I don't want to use my old M-Audio FastTrack Pro as it does MIDI duties and wouldn't want to risk it.

Having a good measurement setup and protocol is interesting to me. The only thing that I currently find limitating is getting more accurate numbers in the higher frequency ranges since Nyquist limits the highest frequency recorded to half the sampling rate in theory and often less than half that in practice.

Therefore, it follows that for the audio band, we often have less harmonic data available for the highest frequencies to make a more accurate HD calculation for those regions.

In other words, to me, doing this the 'standard way' of a single Sine at 1kHz and a single Power level doesn't provide enough characterisation for a full gear (gain stage, preamp, amp, etc...).

Doing it in a more comprehensive way is very useful but also significantly adds complexity to the measuring setup.

I am currently also researching very low noise and very low distortion Solid State preamplification for that kind of application.

I think the Focusrites tends to have a lower noise floor than the Behringers that I have used. Ultimately they go down to about -130dB noise floor. But wiring and grounding are important to reach that.
One the bench is a cute little new DAC from ddHiFi ES9281 in the Tetris shape. It’s feature packed and sounds very very good. It has several cables that convert to USB-C. I am connecting to directly to my iphone lightning plug. 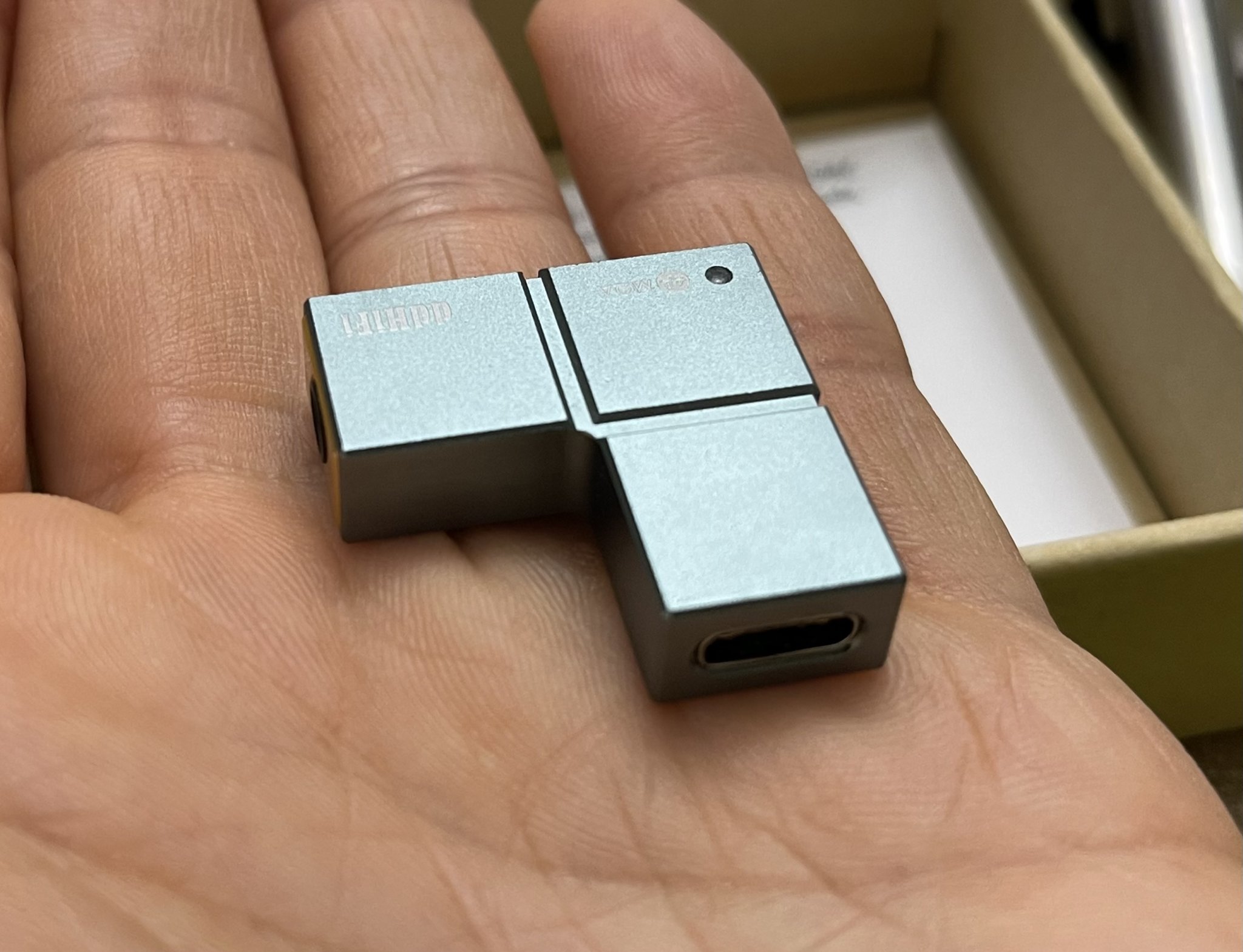 Here it is connected to a headphone jack and the iphone adapter cable. 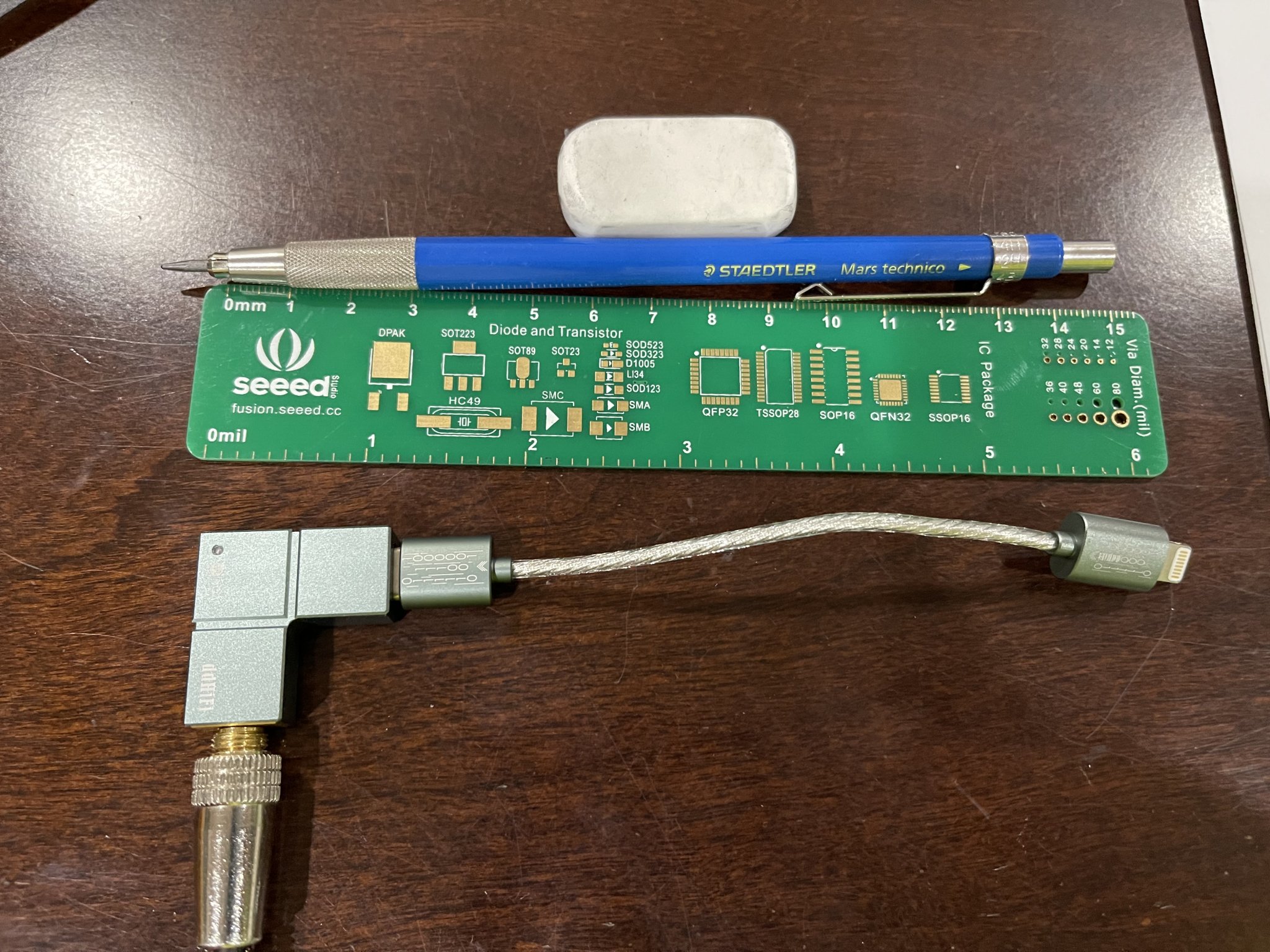 I connected it to the ACP+ with the motorized volume pot and used by OB-1 headphones. Wow that sounded great.
•••
Y

cheapvega said:
AliExpress special....... CS3310 preamp into ADAU1701 DSP into a TPA3255 4ch. I need to double 2 of the ADAU1701 outputs to go into the 4 channels of the 4ch amp, then make 2 RCA outputs to feed the other channels into a sub. This setup is just for general testing,
Click to expand...

Neat breadboard. Coincidentally, I was just looking at another thread for the 1452. I've thought about getting some boards sometime last year when I was coding DSP. I didn't at the time and it seems the boards have gone from $35 to $55 or so already.

One day I'll post some pics of my Synthesizer Workstation's DSP Algorithms and units, it is a powerhouse of DSP, of which there are two main boards, one technically dedicated to Synthesis, and one to Effects. However, each contains useful units for the other domain. Last year, I opened up a lot more routings and configurations in the Workstation and that made the number of combinations for both synthesis and effects explode combinatorially. Nobody else has talked about this after about 25+ years of existence.
Last edited: 2022-01-28 4:03 am
•••
Y

xrk971 said:
I think the Focusrites tends to have a lower noise floor than the Behringers that I have used. Ultimately they go down to about -130dB noise floor. But wiring and grounding are important to reach that.
Click to expand...

Definitely and by default, the Focusrites have quite low THD and THD+N compared to the default Behringer. Some mods get the Behringer quite a bit lower that it from the factory, but there's so much we can do with layout and grounding.

A member named MagicBus did a great thread on mods, and he also designed and prototyped a true differential input stage. However, since it's installed inside the box and it's above the booster area, I think it's better the internal booster is disabled completely - member Remedy provided info on doing that. Additionally, MagicBus also powers his new card with a DC-DC booster. I'd scratch that completely and use either a Linear Reg PSU or batteries myself.

I see Rupert Neve contributed to the design, so it might be good. However, judging from previous Steinberg interfaces measurements, the old ones weren't good. I'd wait and see for independent measurements to even consider it.
••• 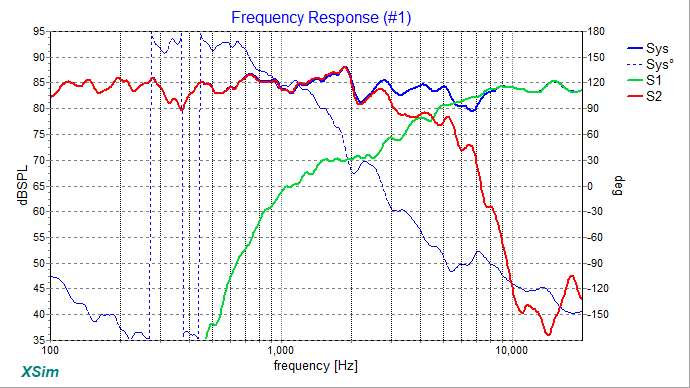 Quasi transient perfect step function is inverted due to mic: 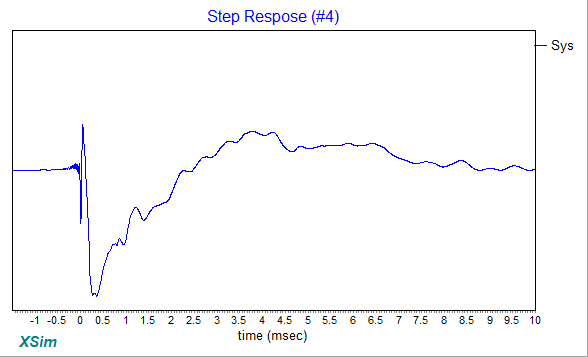 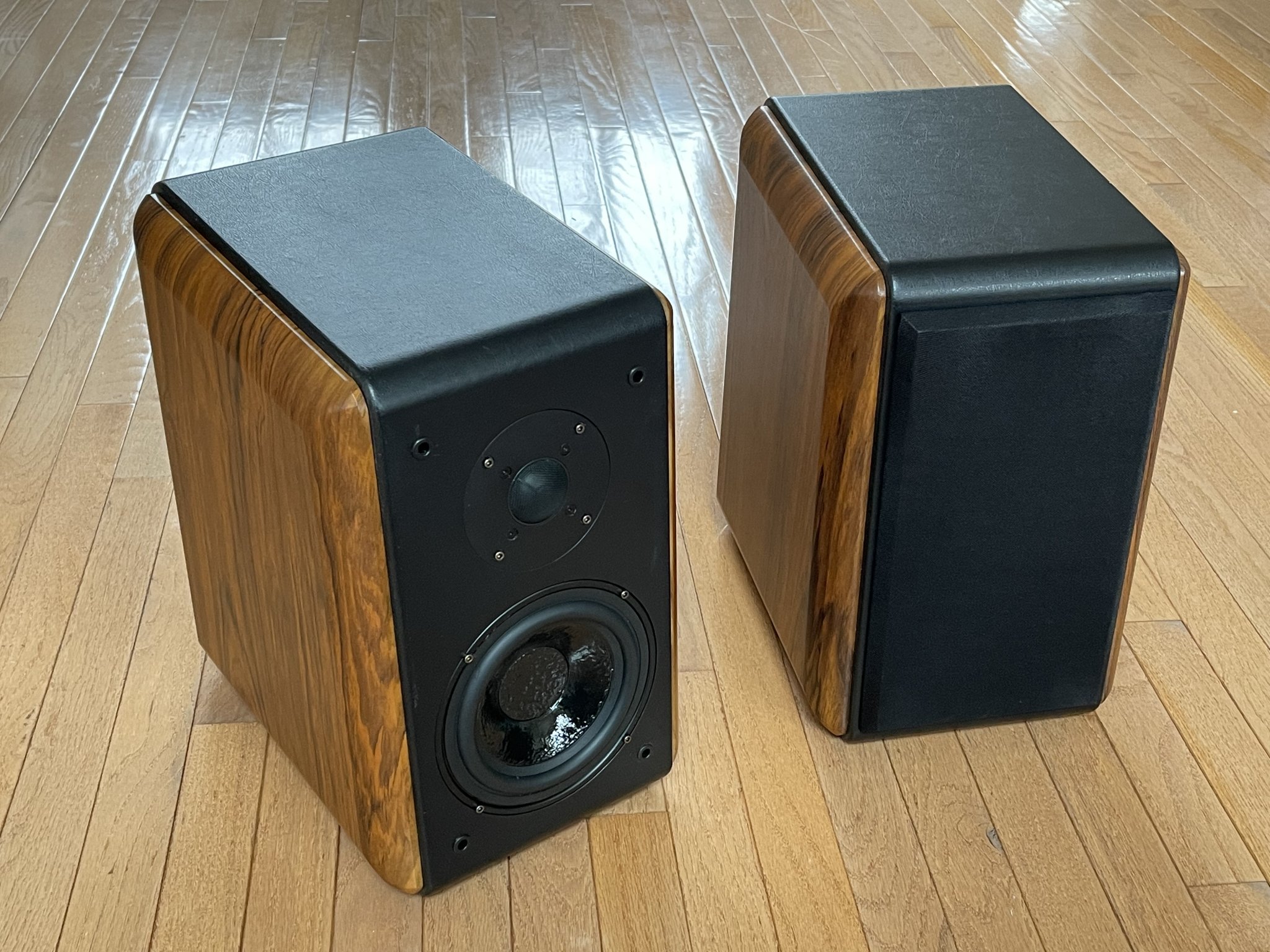 There's a German guy name Julian Krause who does quite detailed comparisons and measurements of audio interfaces on his YT channel. Check it out.
•••
D

Only problem is it is just 96Khz sampling rate , i am doing 192Khz recording for years now
•••
Y

What's better than revisiting the audio interface after a simple mod for turning the DC Booster off while enjoying some Freedom Tea? Nothing at all, eh? Of course I brought some of my gear from Desk Lab 1 to the dinner table, taking some notes for the next steps. 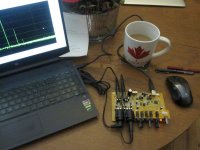 Will re-check all spuriae and harmonics produced by the signal path in various modes. For now, the pesky large hihg-freq spurs are gone, so there should be less intermodulations: 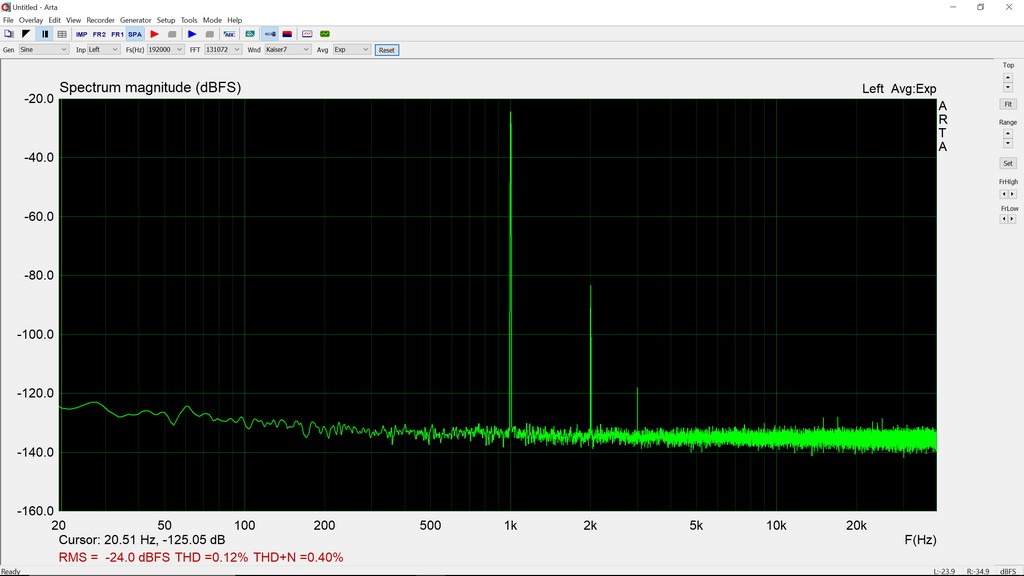 Nice. DCDC converters can be convenient but evil if their noise ends up below 40kHz.
•••
Y

Yes, it seems quite good so far as a retired EE jumped in the thread to tell us of his own investigations. Removing an inductor puts the boost off and I don't need to cut a trace. With trace cutting, it's easier to install a second switch for True Phantom Off.

Now that the Boost is truly off, I can investigate additional mods properly. If I hadn't done that one first, it would have intermodulated all the time, no matter which mod I had done and that would have made a proper evaluation of the mods impossible. In the thread, there is a differential card, itself using a DC-DC Booster. Can you imagine both these boosters interacting among themselves and then intermodulating other signals?

Another thing I checked today is the behaviour of the Input Gain and Output Gain, as well as the caps along part of the signal path. I may have a couple of changes here just to check distortion reduction.

That preamp just sprays harmonics as soon as it's switched On. The interface behaves better if I use 'Pad' when the preamp is On.

Shortening the sig. path here seems to be a good thing to do. I am wondering about keeping the XLR input for measurements though.
•••

On the bench, err… nightstand, is the ACP+ with remote volume controller as headphone amp for my HE400i planars. Nice setup with the didiHiFi Tetris DAC playing some Amazon HD. 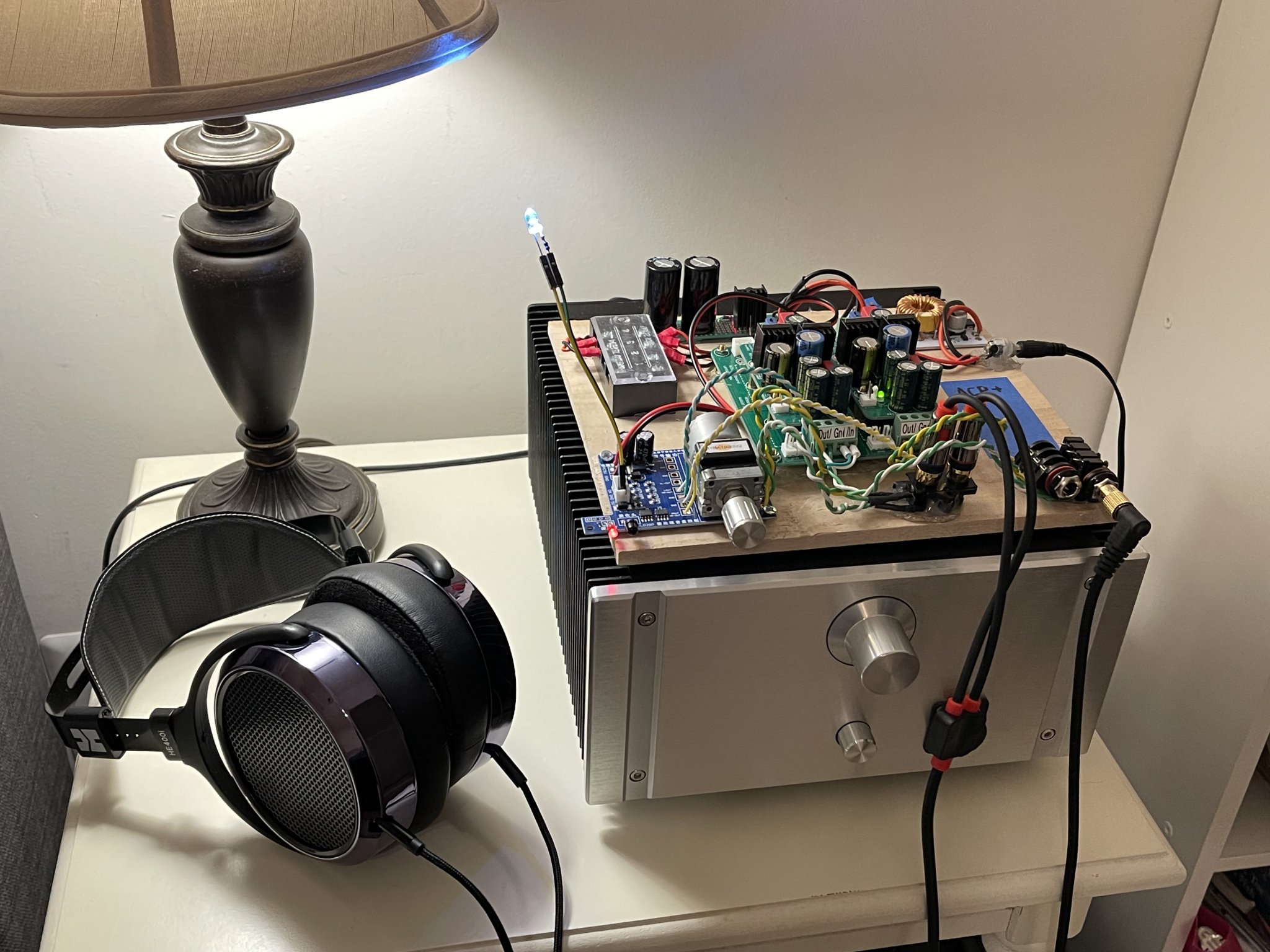 Discovered a new (to me) artist - Julia Jacklin - she has a unique and wonderful voice.

OPA462EVM is in the bench. Capable of +/-90v output, it is quite the opamp. One could use this as a monolithic front end for a higher power (500w) audio amp output stage. I plan on using it to drive a piezo transducer. 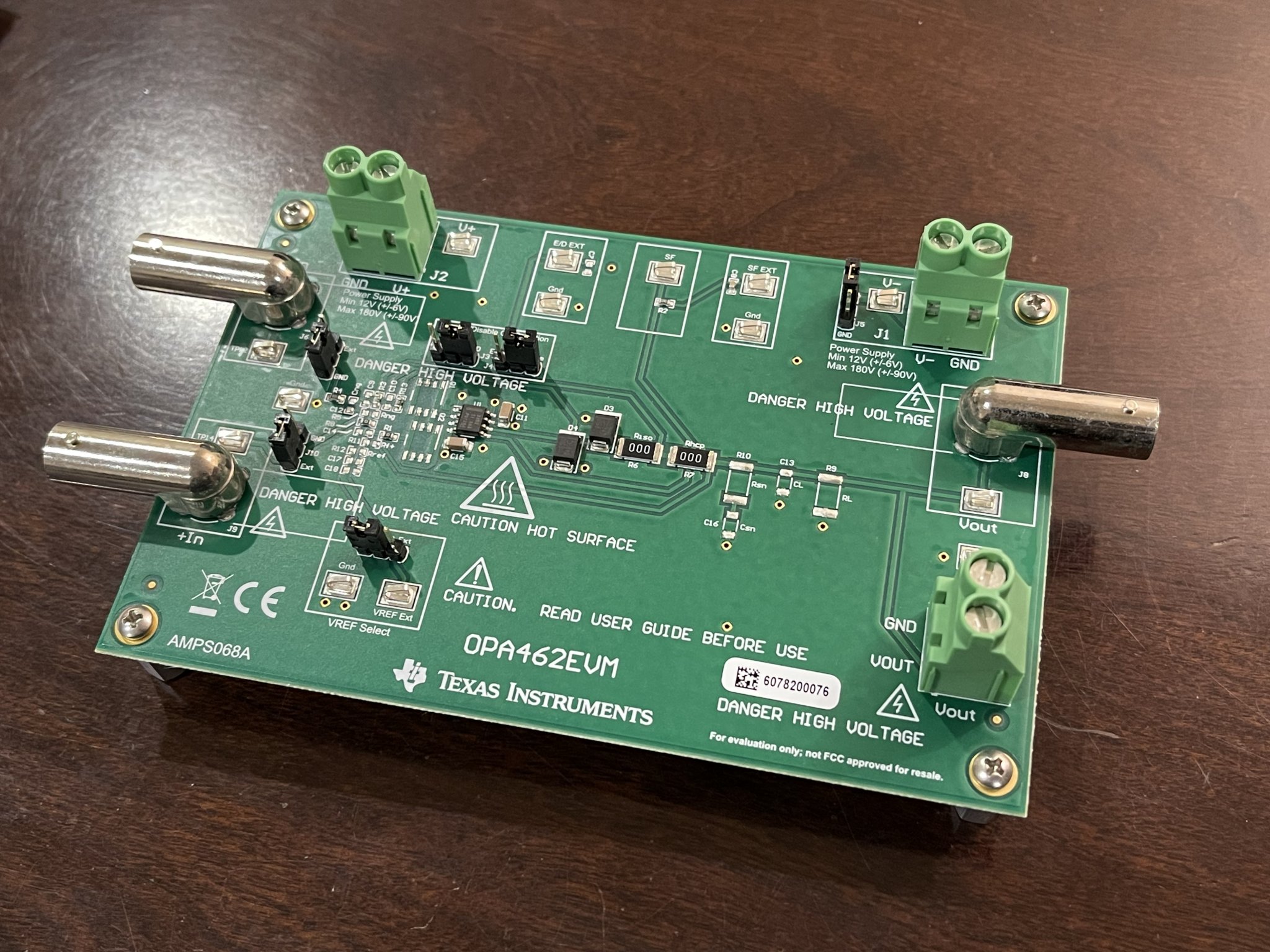 Proof that any flat surface can double up as a bench/lab area.

How do you like those planars? Never heard one myself.