Hope to get the side panel on tomorrow. Can't wait to measure and listen to what it sounds like 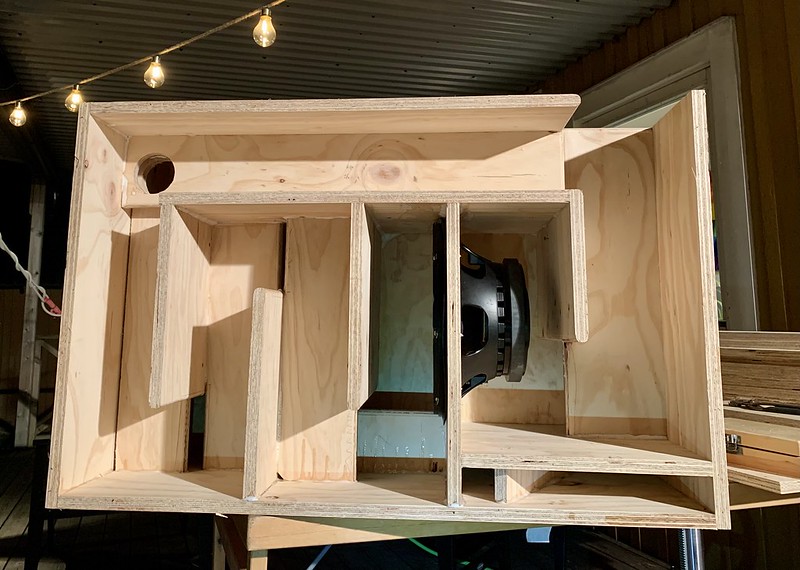 Booger weldz said:
Without the red panel you’ve got a nice 6:2 (3:1) ratio in lengths and volume.
Click to expand...

Yea, I thought of that too when I first started with the design in HornResp. I never got it to simulate well like that and chose to go for a slightly shorter high tuned resonator instead, based on the response in HornResp and my own preferences at the time. We will soon see, or hear, how it will turn out. The last panel is now glued. 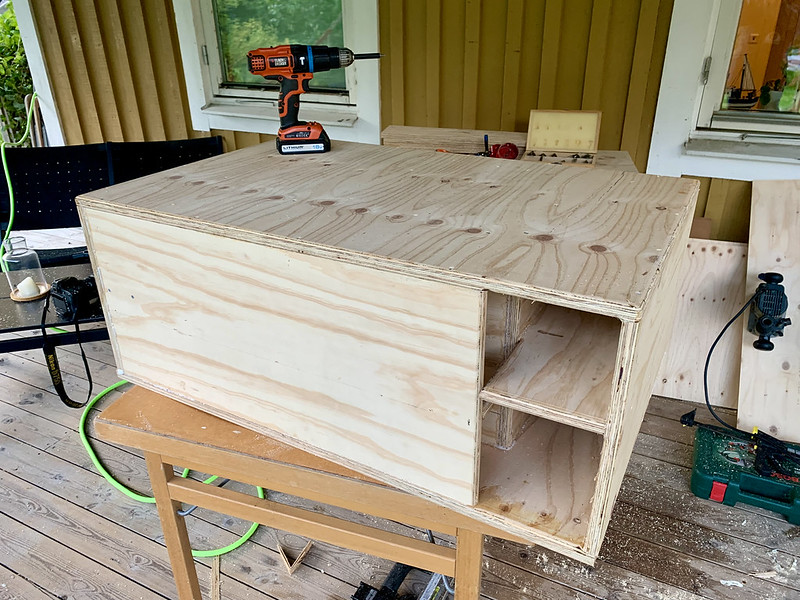 - No, I´m sorry, we are out with the boat this weekend. I tried to hook it up and give a try but there wasn't time before we left.

This is our view from this morning. 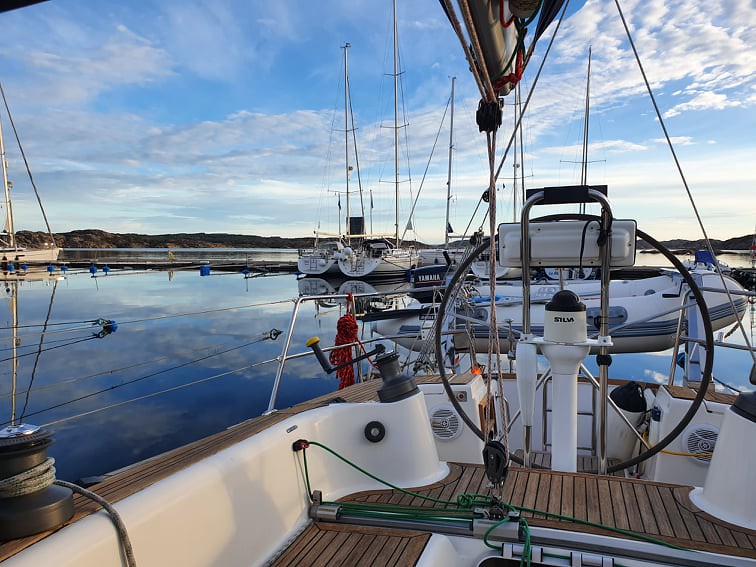 Forsman said:
- No, I´m sorry, we are out with the boat this weekend. I tried to hook it up and give a try but there wasn't time before we left.

This is our view from this morning.
Click to expand...

Now I´ve finally got time to do some measurements. Maybe not the most rigorous but anyway. First I started without any kind of treatment of the speaker. That's the graphs in green. Then I stuffed the bend in the high tuned resonator (HTR) which is showed in orange. 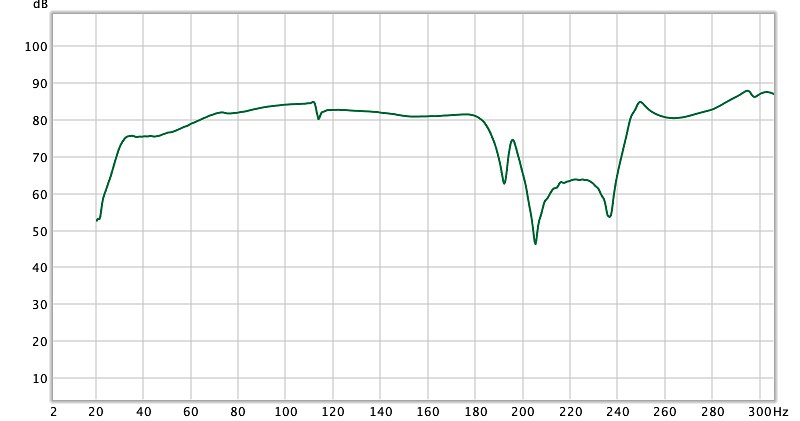 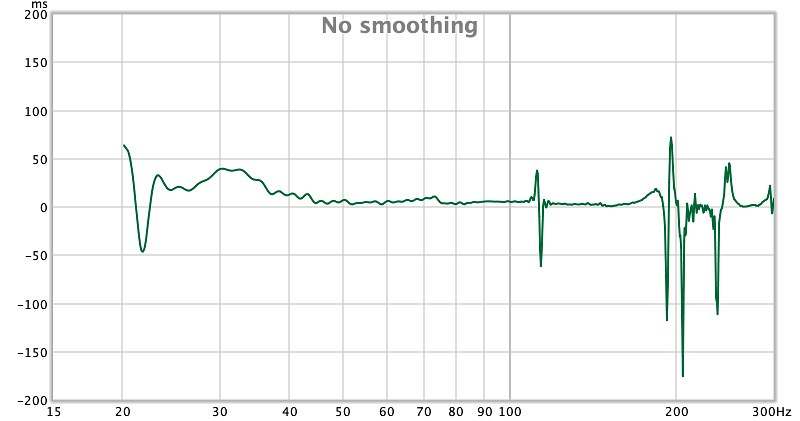 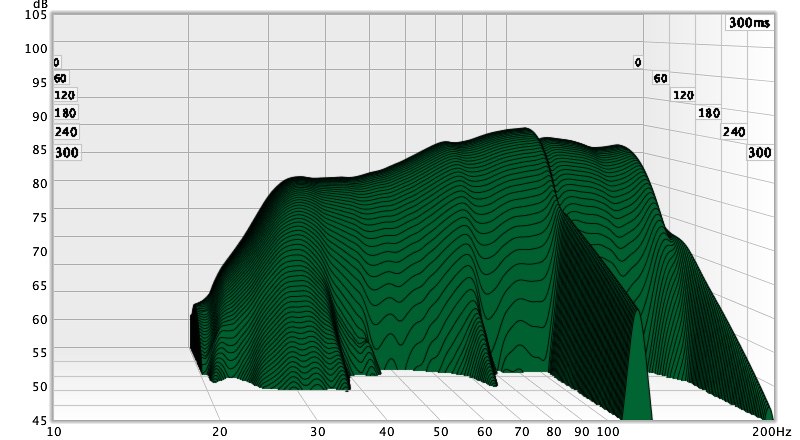 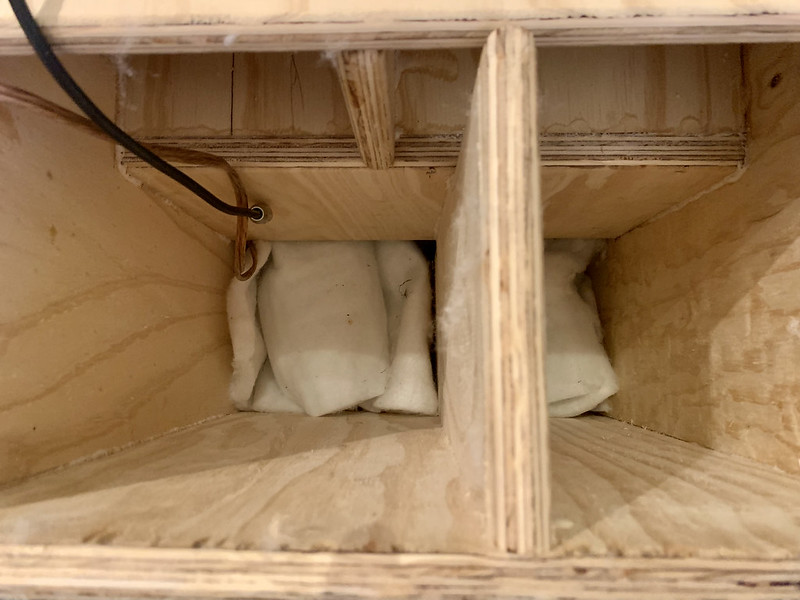 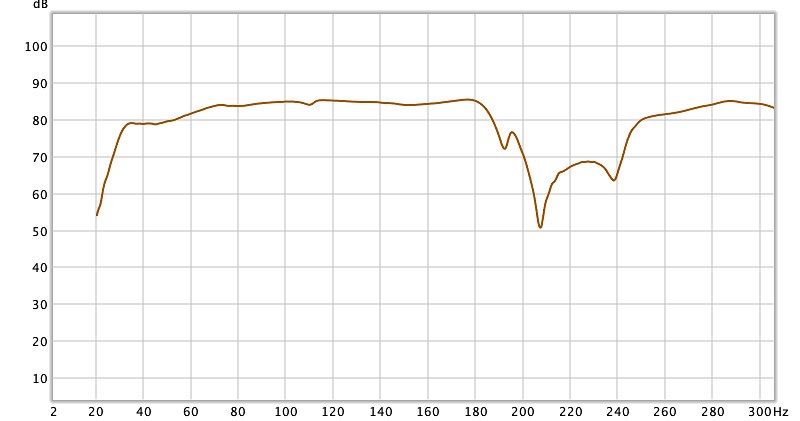 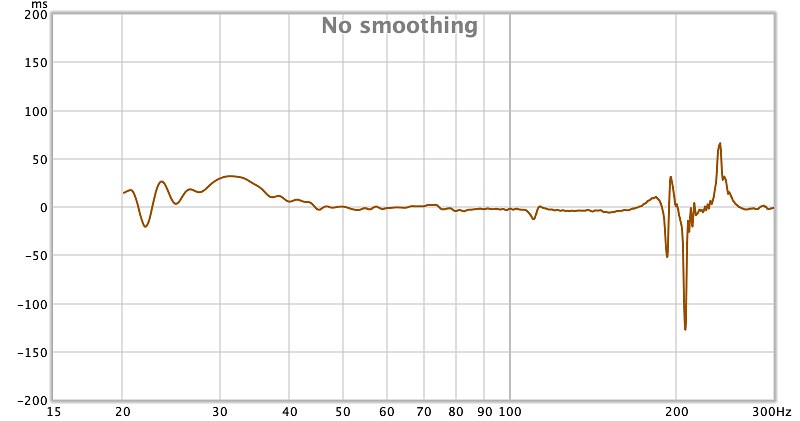 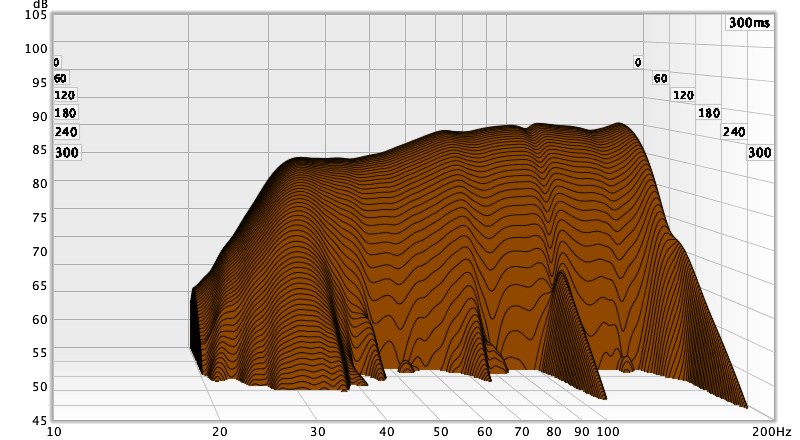 I think this is quite interesting. It did a rather big difference with damping material in the HTR. The SPL hiccup at 110 Hz, as well as GD and ringing, decreased quite a lot I think. Now I want to know if it can play music too...
•••

That's quite nice. that's a nice wide usable bandwidth. I wonder how the sensitivity compares to a simple vented box using the same driver though? What does Hornresp say?
•••
B

Nice! That chamber/path area ‘stuffed’ looks very potent in lots of sims .( S6-s7, or better S7-S8/9). A lot of good things too from an abbreviated version of parallel to series exit with a short rear vented part in Superlow/wide instead of ‘high output’ gains with low Fs, heavy MMS drivers(like a Dayton Ultimax?) work too.

I keep messing with a variety of things with 4 4” drivers and 40 hz in compound pipes lately or 4 12 @ 30. and it’s sure nice to have the PH mode to look at timing of the ‘bounce’ of a pressure wave from the closed ends or assumed fold. The Roar and HRoar are very exciting too. seems to want a little more room to exploit the big csa but definitely a beast too(especially in PH sims).

Expose that squiggle at 105/115 with dual a tone generator with dual or triple beat freqs. and search for any issues. That’ll be the only turd in the punch bowl . It’s the para normal activity … I had one once that was hidden in sim. But could get stirred up into a horrible disaster with the right Pressure/velocity ��

Very well done! I like the design, bandwidth and simplicity a lot. Bet you could get rid of the hick-up by adjusting the path length a few cm. An other itetation though.
•••

Brian Steele said:
That's quite nice. that's a nice wide usable bandwidth. I wonder how the sensitivity compares to a simple vented box using the same driver though? What does Hornresp say?
Click to expand...

Thanks, Brian. I´ll see if I can simulate that for comparison. As far as I remember I don't think it was possible to reach as low with a vented box as there became a sag in the SPL curve between the direct radiation and the resonance from the vent.


Petter Persson said:
Very well done! I like the design, bandwidth and simplicity a lot. Bet you could get rid of the hick-up by adjusting the path length a few cm. An other itetation though.
Click to expand...

Thank you Petter for those kind words. Means a lot to me
Next itteration will have an adjustable path length in the high tuned resonator.
•••

Brian Steele said:
That's quite nice. that's a nice wide usable bandwidth. I wonder how the sensitivity compares to a simple vented box using the same driver though? What does Hornresp say?
Click to expand...

Here is the same driver in 2pi in a MLTL tuned to a 3 dB roloff at approx 40 Hz. 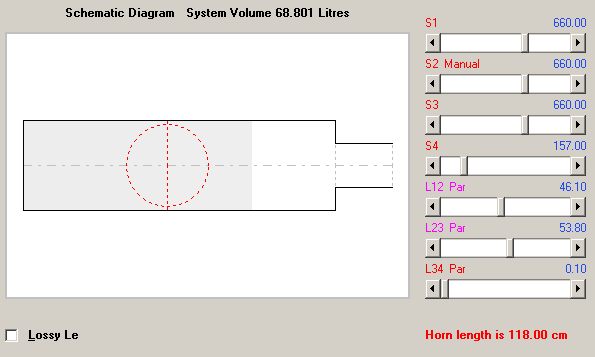 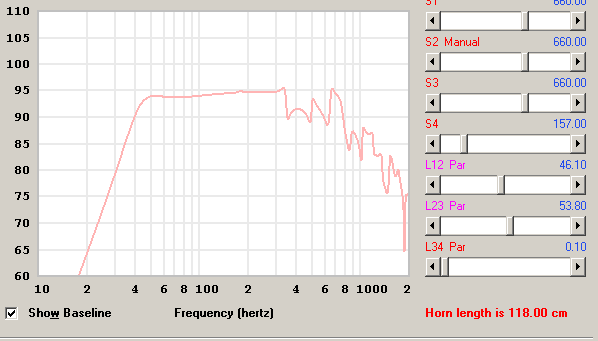 For comparison, here is the TLBP6 in 2pi, which rolled off a little bit smother and almost a half octave lower (more pronounced in 0,5 Pi). 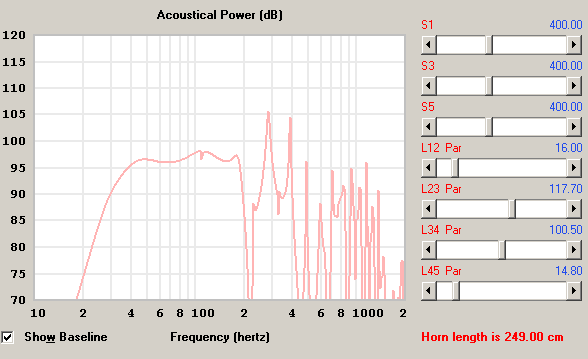 MAX SPL MLTL is about 3 db higher than my TLBP6... 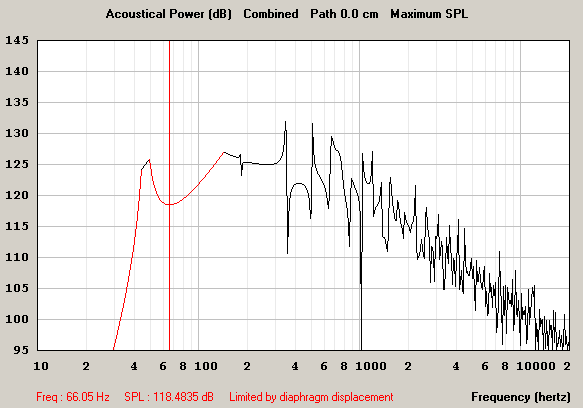 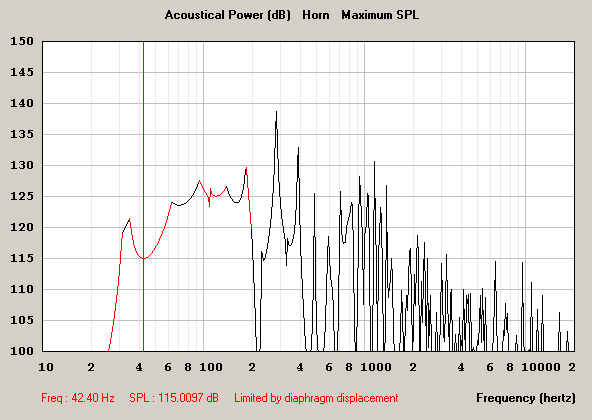 Cornerloded in a 0,5 Pi environment the TLBP6 digs deeper than the MLTL. 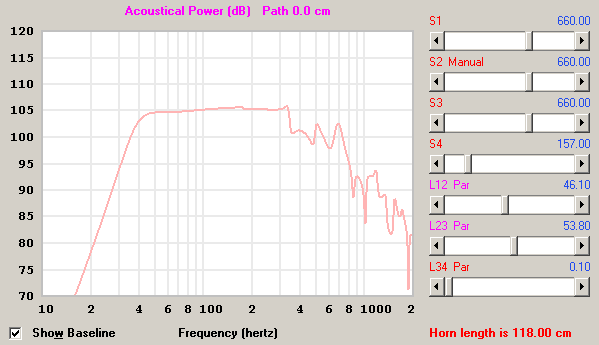 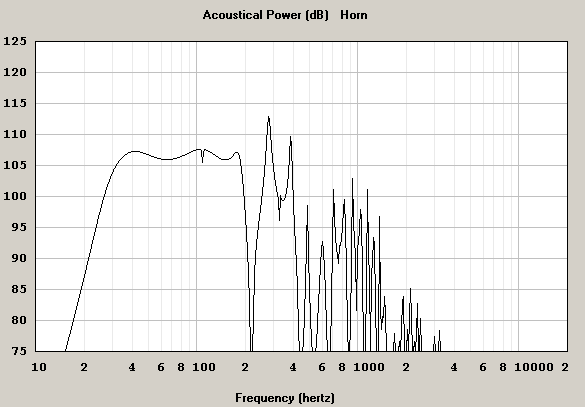 The simulations suggest that the TLBP6 is a few dB more efficient than the MLTL, digs a half octave lower, and has a port area that is 2,5 times larger than the MLTL, which I think is very favorable. The drawbacks of the TLBP6 over the MLTL are its volume and 3 dB lower max output. It was hard to tune the MLTL any lower without getting too much sag in the SPL curve. With the same resonance frequency, the TLPB6 would probably come out more on top I believe. At least as I see it now...

I think it fits quite well Should blend in a bit more when its been painted white. 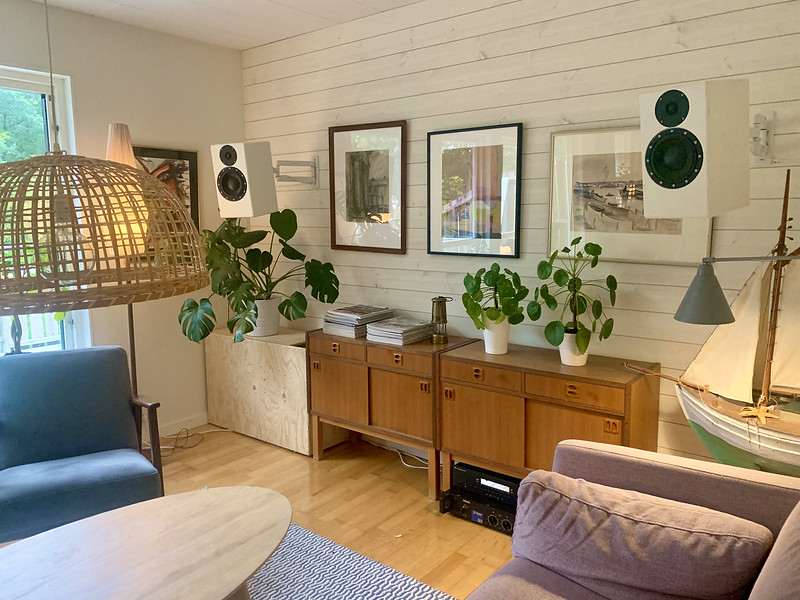 It sure does, the other (mains) look great tooo. Now chase down that rat bastard midpipe Collision (the squiggle in response unstuffed) and it’ll reveal the meaning of life .
•••

Thank,s Booger Weldz. I promise to seek the meaning of life with all my heart!
•••
C

How does it sound?

What is good and is there any drawbacks?
Is the "störning" in the cooperation between the bass and midbass section noticeable or does the damping smooth it out enough in your listening tests?

The measurements looks encouraging, but I am still a bit skeptical to parallel high order pure QW alignments.

I am not so sure your Monstera plant loves the "earthquakes" you subject it to. You might need to add some Perlite too the soil to keep it from becoming to compacted from the vibrations.
•••

Circlomanen said:
How does it sound?

What is good and is there any drawbacks?
Is the "störning" in the cooperation between the bass and midbass section noticeable or does the damping smooth it out enough in your listening tests
Click to expand...

I have refrained from writing any impressions or making some sort of review too soon. The first impressions are biased with the sheer joy of having built something yourselves that any caveats might be overlooked no matter how prominent it is. Nevertheless, I can at least say that it is way more powerful than my sealed 12" Dali Concept sub that I had in the system before. I must tune it in better and apply some room correction and play a bit with the crossover point. At the moment I am testing a XO point of 180 Hz. The mains are too far away from the mouth of the TL so there is interference between the speakers. But I wanted to see how much kick or punch I could get and wanted to run the sub as high as possible. There is quite a som kick to it. Drumbeats and bass strings feel in the chest. There is also a deep bottom end that pressurizes the room... Is it good? I hope so. I think that there is some serious potential but at the moment it is untamed potential. Lots of horsepowers but less control of it.
I´ll try to sum up my experience when the first joy of listening to my own construction has veered off...
•••

Here are a few pictures from the build of the second enclosure.

I made a gaskets from 2mm trick rubber sheet. 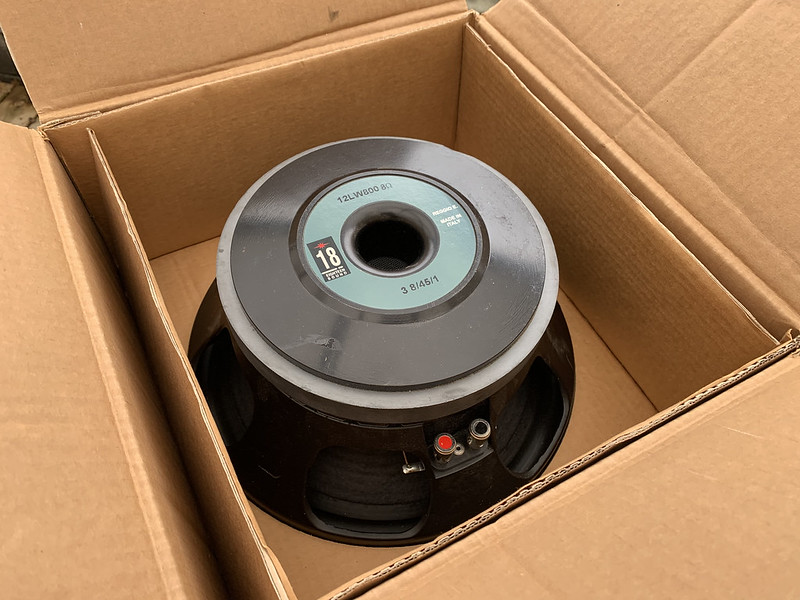 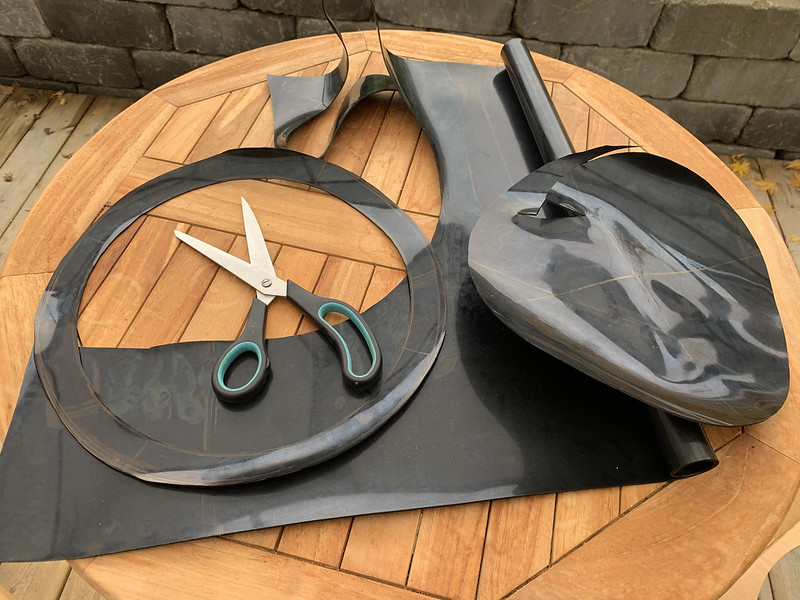 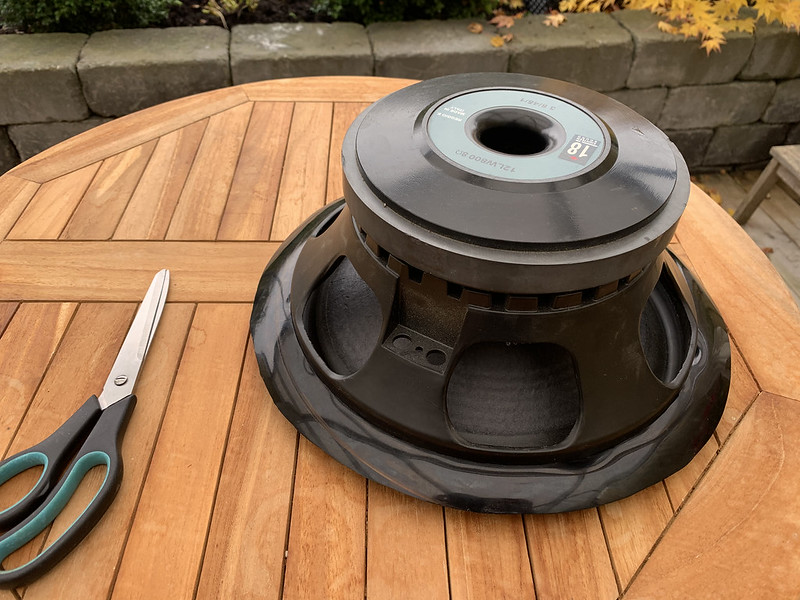 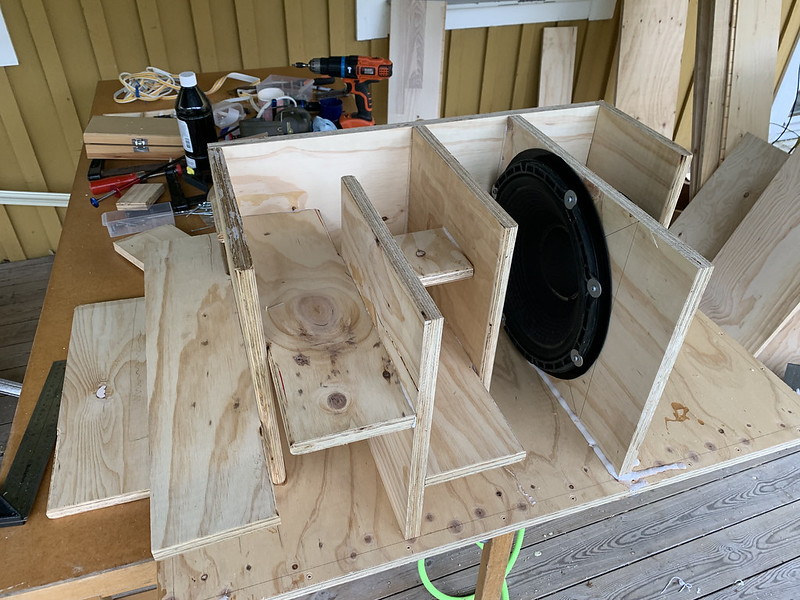 To be able to deal with the cooperation problem between long and short resonator I made the bottom in the short resonator adjustable. I cut the bottom board just proud so it is possible to jam it in place at and hight. By that I have the possibility to find out the exactly right length. I still got some work to do before I have gotten it filed in perfect (or as good as it can be). 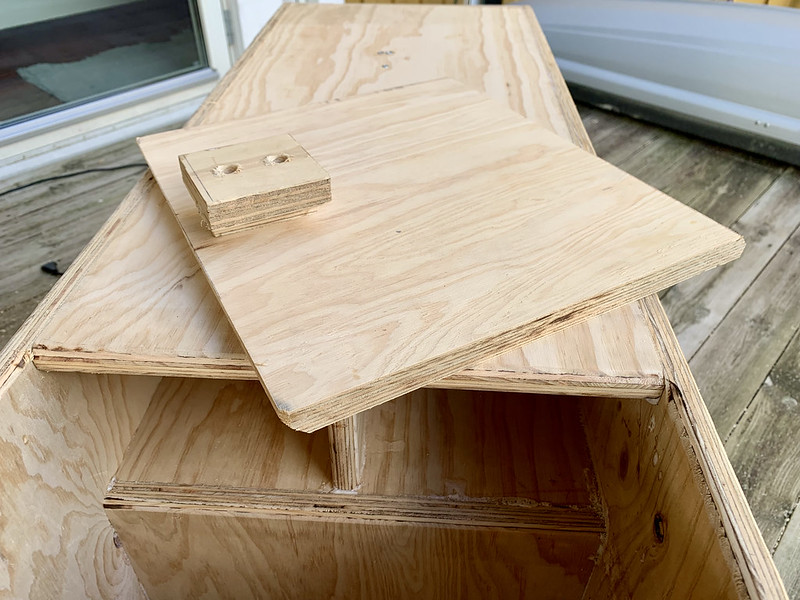 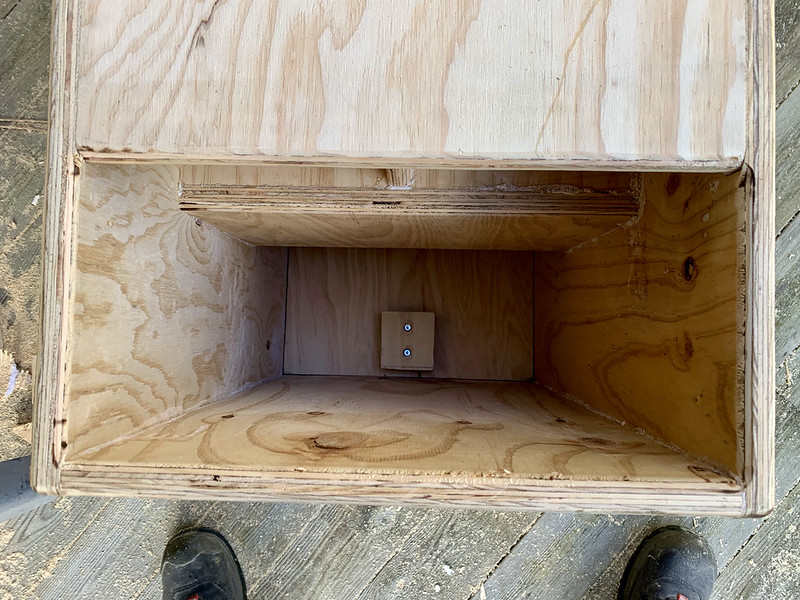 They are quite heavy and not very easy to carry. At least not by one selves. I’m not sure what made me more happy, to have finalised the second speaker or that I found a way to carry it my selves 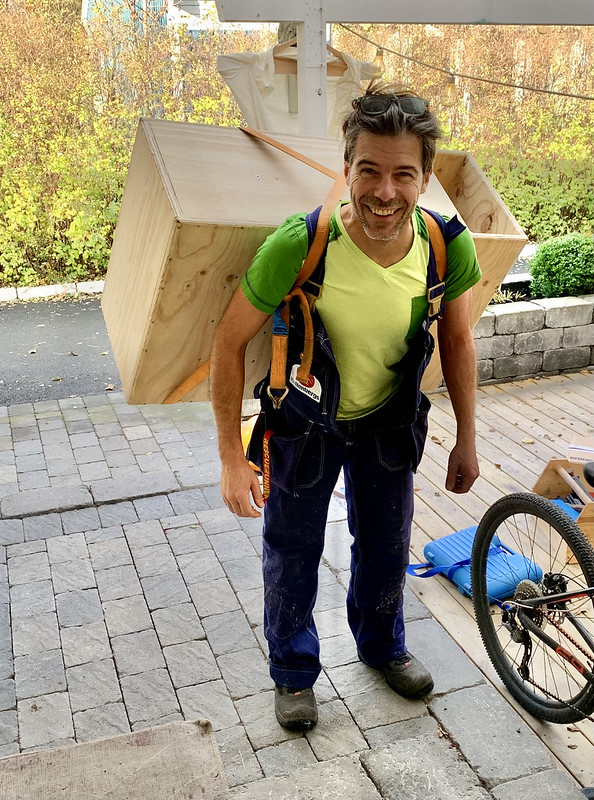 Here are they in my living room. For having a combined volume of approximately 400 litres I think they blend in quite well. It will be even more discrete with some white paint on them too. 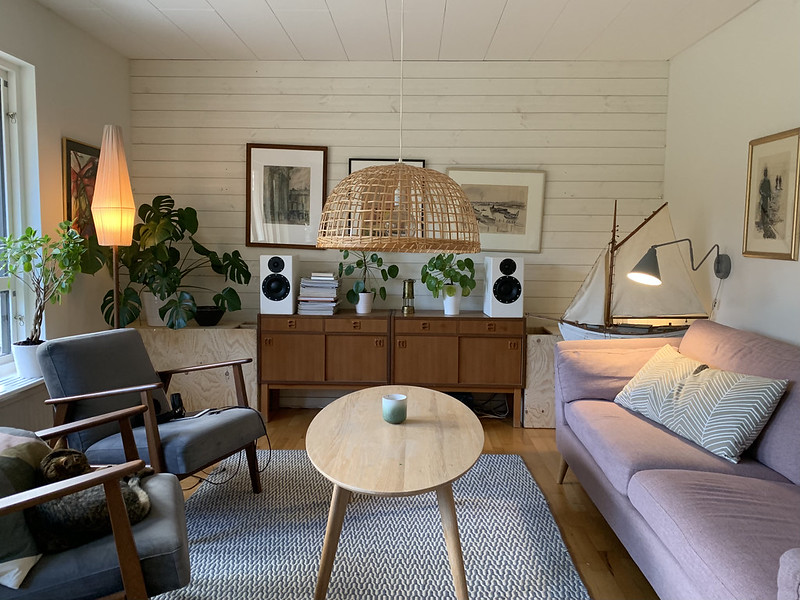