I purchased my rebuilt Quads some months back. Unfortunately, I feel that one of the speakers (left speaker) has a crossover/phase issue. It is about 2.5dB down compared to the other speaker. Also, I have to use them with one speaker connected electrically out out of phase in order to sound in-phase!

According to the seller they have had new OTEC bass and treble panels, 2 x RBT57 EHT boards, 2 x CLP57 clamp boards and 2 x transformer component update.

My REW measurements using the UMIK mic at listening position about 11 ft from the Quads shows the response curves when measured separately as in graph 1, Red trace left and blue trace right-hand speaker.

Graph 2, shows the response of the two Quads measured together. Green trace is electrically out of phase but sounds in phase. Note the increased roll-off at the treble end compared to the curves in Graph 1, indicating some cancellation I think? This makes me wonder if the crossovers are mismatched?

When both Quads are connected electrically in phase (black trace), the response is looking good apart from a slight rise at the treble end. Unfortunately, they sound very much out of phase.

When listening to pink or white noise at listening position dead centre of the two speakers, I only have to move my head slightly to the right or left and the sound becomes slightly brighter rather than the other way round, Also there is a bit of phasiness going on.

Despite my concerns, the speakers do sound very nice indeed. But being a bit of a fusspot, I do like to have things as perfect as possible!

Actually, I use the Quads with a pair subwoofers and Audyssey up to 150Hz to smooth out the bass.

I would appreciate if someone could advise me what the issue might be. (if indeed there is one!)

It would be good to get proper phase information at fixed distances. Since you are using a UMIK you'll have to make special arrangement for that.
•••

Have you looked at the impulse and step response for each speaker and/or each panel?

If you put the mic close to the individual panels, you may get enough discrimination to see them individually while driving the whole speaker.
•••

First, I assume you listened to the speakers before you bought them, right? No indication of malfunction at that point?
With OTA panels, so rebuild is not done by OTA?

I agree with @AllenB to do measurements at a fixed position and @ 1 meter on axis. Set the volume to 75 dB @ 1 khz and leave the volume at that level.
Do 2 seperate measurements with everything identical, only swapping the speakers.
Then look at pulse and step and put frequency responses in overlay graph.
That should give some more information.
There might be a panel out of phase, but other things could be wrong.
•••

If you feel the courage, you can have a look at the component side of the audio transformer. You can find the connection diagram online.
•••

lcsaszar said:
If you feel the courage, you can have a look at the component side of the audio transformer. You can find the connection diagram online.
Click to expand...

Thank you all so very much for your suggestions.

Actually, I bought the speakers online from OTA as a pair of speakers used personally by Steve Williams of OTA. Many emails have passed between us and he has been most helpful in trying to sort out my concerns with the speakers. In fact they were sent back for checking after I initially purchased them with some improvement. Steve most probably thinks I am being too fussy. I can't keep troubling him.

I will follow Vout31 suggestion and do some more measurements. I have only used REW for basic frequency runs, so not familiar with all the other options such as “Then look at pulse and step and put frequency responses in overlay graph” But I will try and work out how to do it and post the results and hopefully that might indicate if there is a problem that needs addressing.

The speaker panels have very shallow roll-offs and it's super easy to get the front and rear segments of the treble panels out of phase. The differences in the 300hz to 1khz range and then coming together give me pause. Here's what the treble panel and bass panel responses on their own look like to get a feel for how they would interact: 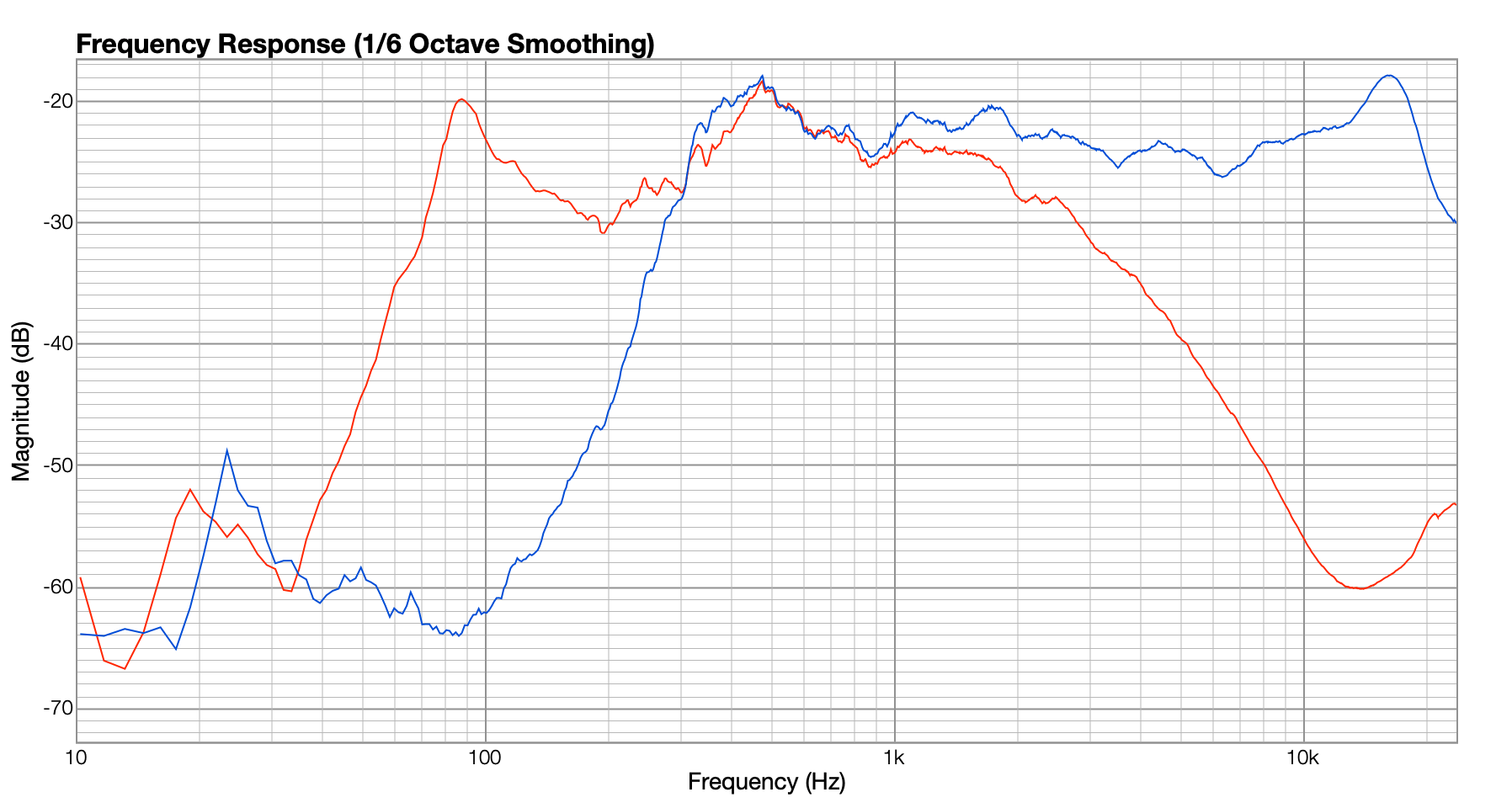 Here's what a typical center and outer vertical sections of a treble panel look like (the center section peaks at 20Khz): 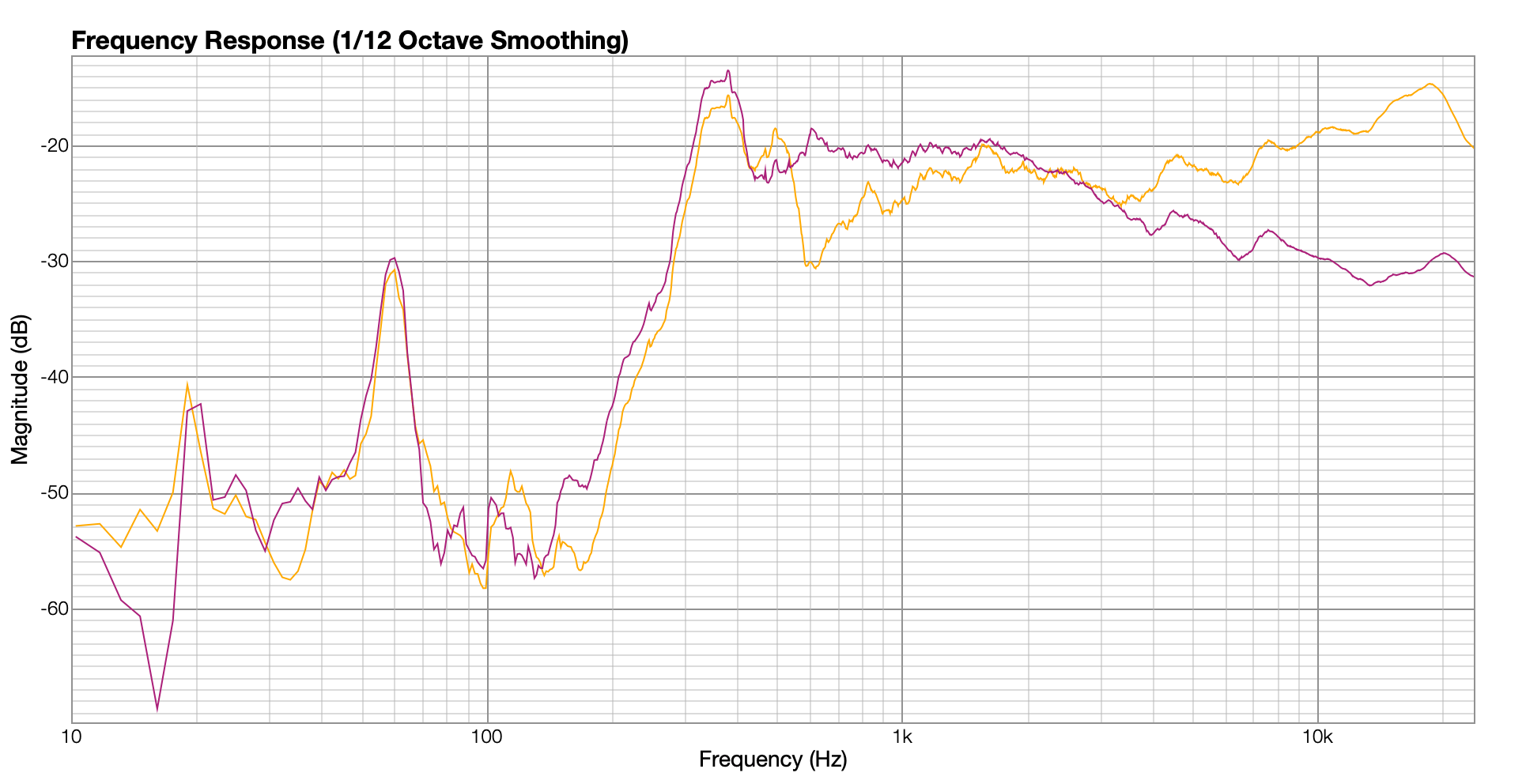 Keep in mind these are fairly closely mic'ed, and only driving one panel at a time, so you it's non-trivial to relate this directly to what you are measuring but you get an idea of what's going on in the speakers. I use measurements like these as quality control for all my rebuilds. Be VERY wary of anyone who doesn't do extensive measurements of their work. The original panel plastic is often distorted from decades of relaxing, and there were large variations between different production eras of treble panels. So I often see speakers in for a rebuild that have one replaced treble panel that never matched the other.

Hi Sheldon, sorry, I have only just seen your comments above. It was rayma that directed me to you. I should point out that I am new at corresponding on a forum, so please excuse my mistakes.
In your opinion, do you think my speakers are not up to spec and if so what can I do about it?
If I read you correctly, I wasn't aware that the front and rear segments of the treble panels acted like two treble drivers?
Thanks, Rodney. UK.
•••

The front and rear aren't different segments, but rather, the middle strip (of the three vertical strips) is a segment and the other two are tied together as another. So it's a three-way speaker of sorts. My front and rear comment is because the original quad wire color choice is poor for each segment. There is a pair of blue wires for the outer segments and a pair of brown wires for the middle segments. There is no indication which of the blue or which of the browns in the front or back of the panel. So it's easy for an installer to get them wrong.

I am not sure if there is something wrong, your plots seem to show that there is an issue. It would be ideal to measure both speakers in the same spot in the room and the exact same distance from the microphone. But in my experience you shouldn't be seeing diffferences like you are in the response. Also you notice something clearly not right with your ears, which is a clear indication of a problem. Since they are much mess sensitive than measurements for absolute issues.

Hi Sheldon. here is the plot of each speaker taken at 1m in the same spot. It is the dip in the 200-300Hz range of my left (blue trace) speaker that concerns me most. Perhaps the bass drivers are a bit down in efficiency on that speaker? Obviously I use the speakers with one wired in reverse to correct the phase. I can live with that. Despite all that, they still sound very nice. Whether the crossover components are out of tolerance I don't know.
A shame you don't live in Grantham UK
Thanks, Rodney.

Have you allowed both speakers to fully charge up for hours? Some can be slow.
•••
E

Sure looks like the woofer is too low in output. The tweeters matches up well.
Seems to be a valid measurement.
•••

IT seems like you have two possible problems. The first possibility is that your panels are somehow bad, and that's why the bass appears lower on one speaker. But that doesn't explain why you have to invert the phase of one speaker to get a solid stereo image (and I'm betting it's not all that solid). If you really had weak bass panels, you'd know it, one speaker would sound thin and instruments like acoustic basses would not sound centered.

I'm betting that you have panels that are more or less just fine, and there is a wiring problem. Do you feel confident enough to take the backs off the speakers and unscrew the input transformer and flip it upside down? You can then check one speaker against the other to see wiring differences.

WRT to location: I'd have traveled to the UK and Ireland at least once or twice in the last couple years if it wasn't for this damn pandemic.

Thanks Rayma and Sheldon for your input. Before removing the back I thought of doing some close-up measurements (say 30cm) of each bass panel to check their individual levels. That might show some useful information. R.
•••
R

Here is a possibility, from https://esl.drakkapps.com/?page_id=778

The carbon comp resistors in the filter network go high in value. The network carefully balances the output of the bass panels relative to the tweeter panel. When the resistors go high it reduces the output of the bass panels upsetting the balance between the panels. Loss of bass leaned out midrange, rather hot on the top is the sonic result.
•••
E

Thank you rayma very much for the above information. I will look into it tomorrow. First, I want the check the levels of the bass panels.
Been busy today so no time for my speakers. R
•••

rayma said:
Here is a possibility, from https://esl.drakkapps.com/?page_id=778

I thought we were talking about a FULLY rebuild set here?
So replacing the electronics for EHT and filter components in the step-up transformer casing would be the first job, even before panel work IMHO.
•••
E

I've just done some more measurements so please take a look and let me know what you make of them.

It is clear that the right Quad bass panels match up very nicely.

I'm assuming that OTA have replaced all the resistors etc on the transformers?