In 1975, I bought a pair of ESS AMT 1's (Heil driver, 12" woofer and passive radiator) and never looked back. They're still working fine, and but for replacing the woofer / radiator foam, they're solid. Love the sound.

BUT they're huge and ugly and the bass is marginal.

I'd like to use the Heil drivers in new enclosures, maybe with a separate midrange boxes to set nearby, maybe with bass commodes / subwoofers to carry the rest of the spectrum. Or minimally, I'd like to build a better cabinets with better bass / mid components. Getting them smaller and prettier would be real nice. With the right speaker plan, I'll change the electronics to suit.

I need beginner's advice, having not done any electronic DIY projects in over 40 years. While I can probably rebuild a 5-tube AM radio or push-pull amp dead drunk in the dark, I know virtually nothing about modern techniques or supply sources--having left this world when Heathkits walked the earth. With instructions, though, I can build anything--and the cabinet-making is a piece of cake.

Minimally, I'll need crossovers and mid / bass speakers--and the lore to hook them up.

I'd appreciate advice on whether this is worthwhile, and if it is, what I might buy / build.
•••
E

In Japan the AMT/Furuyama combination with a flat crossover is very popular. But I never listened to it, I think Furuyamas are not sold in Europe. And the price for the units is high.
•••

A few years ago I had a similar dilema, to eliminate these bulky speakers but saving the tweeters which I think are fenomenal.
I choose to build a pair of MTM´s around the Heil tweeter. The
result was very interesting, to put it mildly, the quality of the
MTM is excelent, only limited by the quality of the double woofers,
which are Bravox, a brasilian brand of speakers not very well
know in this country but really well made.
If interested I can give you details of these speakers which I use
even today.
You can judge by yourself, the picture is here.

I am using AMT-1 tweeters on top of sealed ~80 liter box with 2 Parts Express Dayton Reference RS-225s. The filter is a Cauer Elliptical (LR8/Jon Marsh style) and the sound is just plain heavenly. 80 Liter boxes are big, but thinner than the old AMT1 cabinets. I think the AMT1s blend well with a pair of 8s. I have seen some other designs like this (AMT1 w/2 Seas L22s, Focal 8Ws, Scan Speak 21Ws). I would be happy to share my crossover diagram if you want to go this route.

This is the ESS crossover I´m using. It has provision on the passive side
for the AMT 1 and whatever woofers you´re using (with some mods).
As a bonus it has an active filter for the subwoofer at 95 Hz.
I think part of the good sound that comes from those speakers is due
to the factory crossover that I had a chance to buy three years ago.

Out of curiosity could you please supply me the schematic of yours
just to see how different is it from mine?
Thanks

Umm... well. That appears to be an active (line level) crossover. I'm not exactly sure what you mean by "It has provision on the passive side for the AMT 1 and whatever woofers you´re using".

My crossover will be substantially different considering it is a passive (speaker level) crossover. Having said that, active crossovers are generally thought of as being better than passives, all things being equal.

If the crossover is somewhat adjustable, I would say this: Set a budget for how much you want to spend on a set of drivers. Unless you get something of very high efficiency, expect to buy 4. I would recommend a pair of 8's on either side. Many people here could argue the virtues of any particular brand, but find something you like in your price range. Peerless, Vifa, ScanSpeak, Seas, Focal, Eton and PHL are all good brands. In most cases, expect to get what you pay for. Some will have a different sonic signature than others. A $100 pair of Peerless drivers can sound good, expect that a $1000 pair of Skannings will probably sound better (given the right amount of tuning). I personally think the Parts Express RS225s are a real deal at their price.

Once you have the drivers, it's not too difficult to figure out the right size box. Most vendors can recommend the appropriate sized box for any given woofer, of course double it if using 2.

The last part would be setting the crossover up. If it's an adjustable crossover, shoot for a xover point around 1000-1500 depending on the woofers you use. Listen to it and see what sounds best to you.

The picture below is somewhat representative of what I have done, however that one is using Focal drivers.

Hi Jmateus,
I am not sure, but " the black box" remember me the original ESS
crossover of the Transar ATD 2 sistem. Am I wrong?
regards
•••

Yes, I believe it was used with that ATD system, however I bought
it separately sometime after I had the ESS speakers.
It is a crossover especially designed for the Heill tweeters, and
it features an active section for a subwoofer that gives it a
certain versatility. The rest of the crossover is passive, again for
the tweeter. It´s a nice piece of equipment, they don´t make these
things anymore, I´m sure.

John L
Among all the name brands of drivers I still think the Parts Express
private brand Dayton has a lot of good drivers that represent a
very good value. I´ve used several in the past, I still remember the
excelent tweeter they had #275-070 (out of the production line now)
but an excelent value for the money.
I´m the type of person that is always looking for good buys no matter
the name brand and, sincerely, I´ve found excelent returns for
my money, a good example of this is the Bravox drivers that I use
in my MTM´s along with the Heill tweeter. It was a sale item at
Parts Express....
•••
I

(sorry for my english)
Hi jmateus,
I am very surprised. Look at the rear of the box,please. If there is writed "transar heil out" on the two cannon connectors you have purchased a RARITY!
Maybe you not remember the dipole heil woofer (4 membranes) but (maybe)this is his dedicated crossover .
In this case ,unfortunately, the totally different modality of emission
of the different drive units cause impredictable results.
Maybe the passive section it was modified , or maybe you are very lucky!!
Many years ago I had a transar atd2 system (used) without crossover.
Now you find it! If you could imagine the difficult to find the schematic
and duplicate it............
Ah , very strange world!
regards
•••

It is indeed a very strange world.... I had no idea when I bought this
crossover I would buy a true rarity and in fact it was something that
I had to figure out in view of the fact that I had never seen one like
that.
I opened it up and try to follow the design as best as I could and I
came up with this little drawing even to help myself when I wanted
to do any connections to my speakers. I needed right away because
of the tweeter and also because the crossover that was in the box
was very primitive as well as the woofer and the passive radiator,
all junk...
Made new speakers (which I publised the photo) taking advantage of the excelent tweeter and I don´t regret it because the sound is
quite good...
I realized this is not the crossover device for my speakers but I
dealt with it, changed a few caps (the existent ones were ****) and
a couple of coils to suit my woofers, but the high section is untoutchable
it controls the Heil tweeter and I don´t want any discrepancies.
But for you to realize what the whole thing is all about here is the
layout of the connections, quite complicated, thank you.
Rarity? It´s possible, at least I´ve never seen one like this....

I couldn´t upload the sketch I made with the connections. Let´s see
if it goes now...

Hi Jmateus,
I was right! 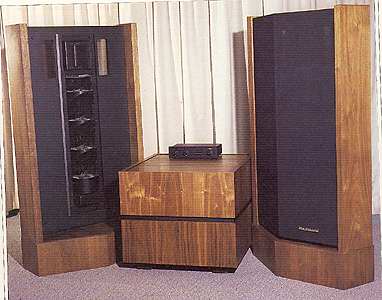 regards from twenty years ago!
•••

Thanks for the pictures, it´s quite a set up what you got there, very
nice.
One thing I forgot to ask you was what do you mean by four membranes? Is that something in your speakers? It´s because I´m not
familiar with that nomenclature, but it might be something very
proprietary of ESS.
In any case I could not make nothing familiar to me out of the pictures
except, of course, the tweeter and the black box.
•••
I

I'am sorry, I have severe problem with english.....
The Heil woofer was exlusively ESS device by Dr.Oskar Heil for this loudspeaker system called "transar". The four lexan diaphragm is connected by four carbon "tubes"(pipes) driven by a conventional coil+ magnet at the base ( the square element).
The system was sold complete .
Previous system, the original Transar was five diaphragm woofer
(current-driven) with a bigger flat baffle and without Subwoofer (1979 if I well remember).
I am wondered what ESS (on his website) do not show this historycal
system. Maybe was a "sales-flop"?
P.S. the Photo are by SUONO (italian magazine1986)
regards
•••
E

Seems to be something like an ancestor of the Tymphony LAT.
•••
I

Hi el'Ol ,
When I asked to Tymphany the same thing they answered so :
"Unlike the Heil,the diaphragms are not attached. Our moves the air like clapping your hands togethar."
I wanted a technical drawing to understand very well but this was not possible (comprensible ) .
They are a drivers manufacturer who sells to others manufacturers.
Waiting.................l
•••