There is a trade between Vce-sat and fall time in IGBT. Check HGTG30N60A4D for example, it has 25% lower Vce-sat at 30A at the expense of 25% higher Eoff (ignore switching times, they have little meaning).
•••

Hello, I already posted in the Solid State section, but I think it's more appropriate to post in the Class D section.

Lets look again over the IGBT discussion, now with new Hi-Speed IGBT´s on the market, I was wondering if someone is using IGBT's in a H-Bridge configuration for high Power Sub-woofer amplification or even has use successful for Full-range amplification.

I'm thinking IGBT's specific in Class D operation. The new IRGP20B60PD or IRGP35B60PD WARP2 devices from IR can handle switching up to 150khz. Having this devices in a full bridge operation would give massive output power.
•••
P

It's simple, but quality is limited. I used IRGP50B60PD1 in full bridge (fsw=100 kHz, not for audio) some years ago, and I found its diode is not as fast as I needed.

Hello Pafi,
Pick up any modern PA Low-Driver and you see that they are power hungry.
And as the most expensive part of any PA-Amplifications is providing Power for the low end, I think it would be interesting to develop a cheap dedicated high Power Amp.
•••
D

Pick up any modern PA Low-Driver and you see that they are power hungry.
Click to expand...

Is Eminence or JBL out of date? Please name one product you think about! Wherever I search I don't find a resonable speaker which needs this high voltage.
•••

2500W at 8 ohms is surely not needed for any single LF driver, max power handled by known PA LF transducer is 1000-1200W range and 1500W is max permissible for short brusts.

whereas 5000W @ 2ohms is very desirable from an amplifier and that needs rails less than 200V indeed.

Also I didn't say that it should be to power only 1 Loudspeaker.
•••
P

Also I didn't say that it should be to power only 1 Loudspeaker.
Click to expand...

Normal usage of multiple loudspeakers is paralell connection, what means voltage is independent from the number of loudspeakers.
•••
C

Well, some time passes since last post. 2500W sinus power at 8 ohms are still not needed, but power is increasing B&C will release soon it's new 21" Driver with 2500W AES.

And Powersoft is using it with her new IpalMod.

I sill would like to know if someone has made a Class D with IGBT devices ?
•••

I developed a 120V 60Hz sinewave inverter prototype switching around 50khz a few years ago, with a full bridge of SKP10N60 triplets, powered from rectified 230V 50Hz. All hard switched. It was my first attempt at high power class D. Efficiency was around 87% at 1800W. Not amazing at all.

Why? These IGBT exhibit high tail losses at low currents, idle losses of the coverter were around 50W. Gapped ferrite output inductors were contributing to idle losses substantially, the gap was long and the flux leaking was producing high losses in the windings. There was not much room for bigger output inductors allowing a lower switching frequency.

The next inverter prototype was half bridge, with SGH80N60UF paralleled with SPW35N60CFD (IGBT turns off, then 400ns delay, then MOSFET turns off). It had a PFC front end producing 420V on a center tapped capacitor bank. All was soft switched with magnetic snubbers, and I developed a PIC-assisted low power mode with a modulation scheme allowing discontinuous current in output inductor. The PFC also had a low power burst mode. I got <10W idle losses and 94% efficiency at 1800W that way.

Then I started with audio class D and MOSFET full bridges, keeping supply voltage below 200V. I'm getting high-power efficiency figures around 90%-93%-95% from mains input to 2-4-8 ohm speaker that way.

The biggest problem with IGBT is the compromise between Vce-sat and turn-off delay. The delay is not a problem in SMPS but it hurts THD performance in audio class D (not practical for self oscillating), except for LF amplifiers.

There are new amazing IGBT like IGP50N60T ("TrenchStop and FieldStop"), that exhibit an extremely short tail like ultrafast IGBT and low Vce-sat like standard speed IGBT, but there is still a substantial turn-off delay (300ns). I have recently used that one in a PFC, but still paralleled with a MOSFET that is turned off slighlyt later, resulting in around 400ns overall turn-off delay.

There are also newer ultrafast IGBT (see STGP30NC60W), but these still exhibit not-so-low Vce-sat, similar to a MOSFET+Schottky+HyperFastDiode combo (except maybe at very high currents) and are not intended for paralleling (negative temp coeff. in Vce-sat). There is still an advantage in part count and less stuff needs to be mounted to the heatsink.
Last edited: 2011-10-05 6:13 am
•••

celsosc said:
Pafi!
I sill would like to know if someone has made a Class D with IGBT devices ?
Click to expand...

My recent 5KW @ 2ohms using IXYS IGBTS IXGH60N60C2 switching at 125k in BD mode[3-level PWM] hence the resultant ripple is 250k at the load end. Inductors are not mounted on board as they were under test off board[green wires in first pic] with various material configurations ranging from -8/90 and Sendust 60u.

I sill would like to know if someone has made a Class D with IGBT devices ?
Click to expand... 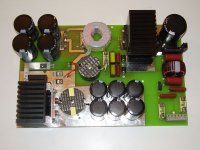 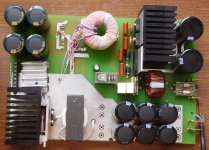 In comparison with IXGH60N60C2, HGTG40N60A4 has double the gate charge and slightly lower Vce-sat, but keeping the same Eoff figure. HGTG30N60A4D is very similar too, but with built-in diode. IXYS parts usually cost 2x or more than similar parts from other brands.
•••
C

Eva said:
The biggest problem with IGBT is the compromise between Vce-sat and turn-off delay. The delay is not a problem in SMPS but it hurts THD performance in audio class D (not practical for self oscillating), except for LF amplifiers.
Click to expand...

You are absolutely right, and one of my first thoughts of using IGBT was for LF amplification.

Correct me if I'm wrong, but almost all class-d designs I see are designed with a Frequency response for the hole audio band.

But high-wattage amplifiers are mainly used to reproduce the low part of the audio spectrum. Wouldn't it be better to design in a more restricted Frequency band and optimise the amp for LF reproduction?
THD performance in the low end of the spectrum is really not critical, it can have a high value and it's not noticed. I thing a big advantage would really be by using slower switching. The problems with the turn-off delay would be solved.
•••
C

Workhorse said:
My recent 5KW @ 2ohms using IXYS IGBTS IXGH60N60C2 switching at 125k in BD mode[3-level PWM] hence the resultant ripple is 250k at the load end. Inductors are not mounted on board as they were under test off board[green wires in first pic] with various material configurations ranging from -8/90 and Sendust 60u.
Click to expand...

looks really great !!!
wow ... [email protected], it's similar to what I want (2,[email protected])
But you have to deal with more current in your design. How did you manage with the PCB ?
The PCB I'm making have some similarity with yours, power and filter on big board, signal and control on a board placed in right angle.

I'm now searching for the components but struggling to find bigger cores for the output filter. Please, can someone suggest where to find/buy ?
•••

In fact, I have 2 versions of my highest power amplifier, one is full range, the other is for mid/bas/sub and is slightly more efficient.