I was talking about C3, C4, (the ones that keep it from oscillating to death) on the mosfet boards. Always use. I will go back and edit that into my post for clarity.

Actually my question relates to the c1x/c2x on the output boards. I see the caps on the fe board and on schematic and those make sense to me.it’s the ones on output boards that I simply cannot find on v3 schematic. I’ll look again. So for a 4pr device v3 monoblock, (2 n boards on one sink and 2 p boards on other sink), I should populate c1x and c2x on only one of the n boards and one of the p boards? Does it matter which board, ie, closer to fe or daisy chained one? Thank you both for helping me understand. Happy and healthy new year to all.
•••
A

I am having a fit posting pics, but let me see if this will work.

I thought (unless I am using the wrong schematic, so please forgive me) that C3 and C4 in the snip of the schematic below were for the oscillation. Listed as optional, but strongly recommended.

C3 and C4 are (I think) in line with the center of the N and P boards close to the TPs. I just can't see well enough on the pic to post it, nor do I have a board to trace.

C1 and C2 (as noted on the schematic in the first post and on the V3 boards) are here... along with their neighbors C5 and C6.

Everything for everyone, should be prefaced with a big ol' fat, I think. B/C I am not near a set of boards and don't have a decent display to work with at the moment.

Perhaps, @algg could post some pics that are much better than my attempted grabs.

Edited to add - They've just posted, so perhaps it will be easy-peasy for you two to chat back and forth. I'd love to understand the outcome.
•••

Oh jeebuz, I really need to look things up before posting… My apologies…

On the Mosfet boards, the anti-oscillation caps are C3, C4. Always use. 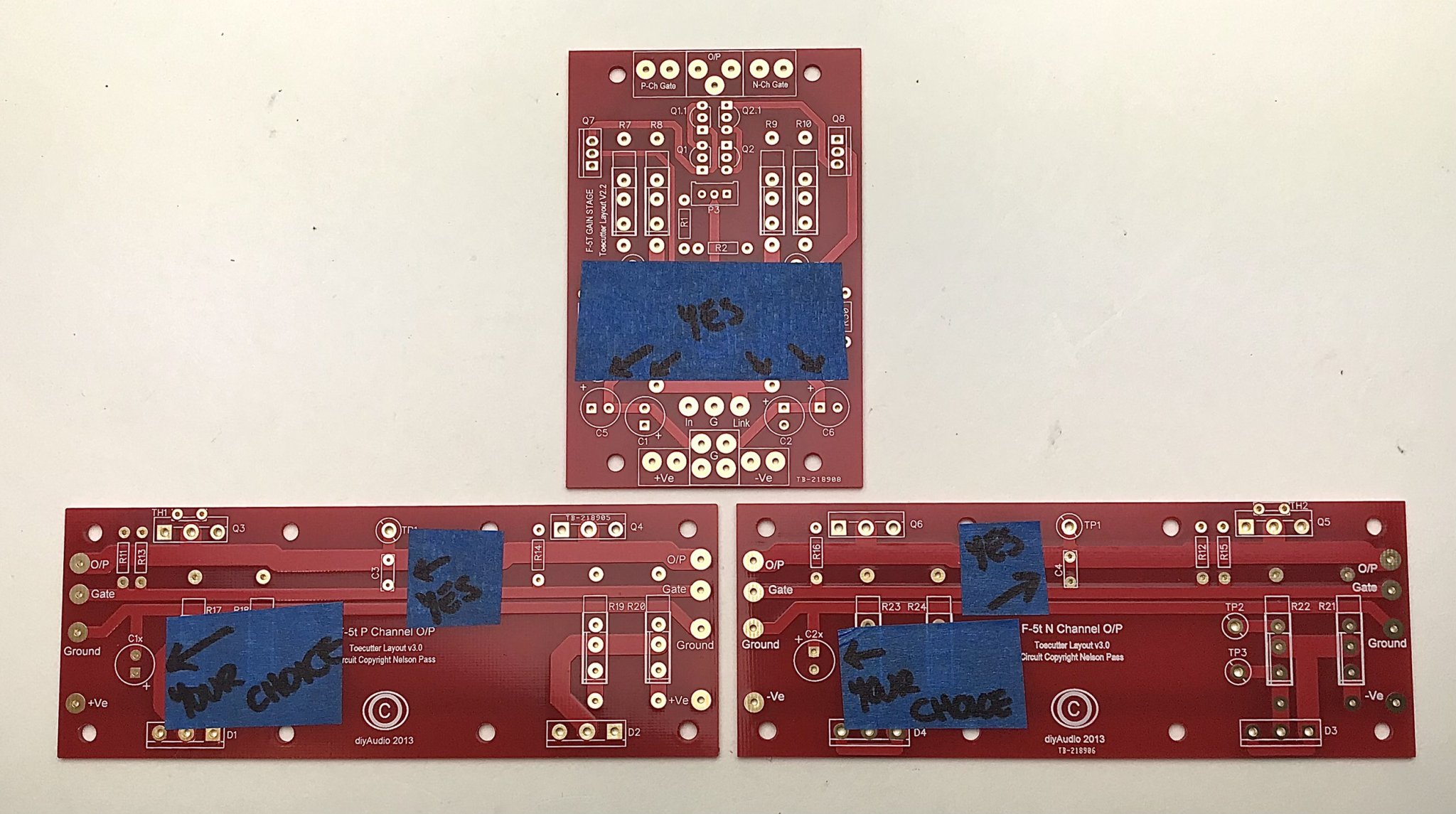 That's what I had thought, but really needed confirmation on. I could not see the back of the board in any pics to confirm if C1x and C2x were going to be electrically identical to C1 and C2. Also, thank you for the note of preference for placing them on the FE boards. Into the notes that thought goes.

Sorry for causing any confusion @algg! With the board revisions, I just could not be sure, and I should have waited for someone else to answer initially.

Lol!! I love you guys! I chuckled when I scrolled down and saw the post-it notes on pcbs. Now you are talking at my level. Everything is very clear and i can’t thank you both enough. Can’t wait to start building. Thought I could get started over the holidays but dontcha know, holidays never work out the way you plan. Best,
•••

At some point I did want to try putting the diodes back in the circuit. I've never built with them, but I saw some promise in using Higher Vf diodes with a bias point and source resistors set to not allow conduction until about 4A of current. The trouble is, not many speakers will draw that much current at sane listening levels.

Of all the amps I built since the F5T was published (over ten years ago now), three amps were built with laterals in the output (obviously configured differently - no thermistors, no current limiting, no feedback cap and 15dB gain), other four with verticals. These are the issues I faced:

The first one I built came back after three years for suspected output device failure (smoke emission) but it was fine, no issues except for a slightly browned CRC resistor in the power supply. I actually left it in there, so that it would be the first to die in case something did go wrong.

Another one - this one is seven years old - is sitting on my desk with bias runaway on one channel, with suspected trimmer failure (the one time I decided to trust a Vishay trimmer instead of Bourns). It is testing fine after replacing the trimmers and only the trimmers. I don't have a green light on the power supply, which I'll get to next.

The PCB in use for most builds was a single 300mm wide board for the whole circuit, three pairs of outputs - and I always used all three. V-grade devices for verticals, BL for laterals. Always used the cascode, usually 2SB669/D649 pair. JFET and cascode both had heatsinks - this is a hot country. JFETs set to run in 8-10 volt range, rather than half-supply.

The PCBs were ordered in one lot of 10 from JLC, and the layout permits downsizing the 1nF feedback caps to 220pF. The thermistor arrangement is taken from the older Tea-Bag version (thermistor + resistor between gate and output instead of one device drain), with a small cap across the thermistor that further enhances stability and bypasses it at HF. We get pretty poor quality parts in India, so have to make these modifications to suit them.

I only used the V1 circuit with these personal alterations. FWIW. I'm no longer building these - just too heavy for me, but it was a fun journey and it's taught me more than I ever thought I'd know. All due to Nelson's generosity in sharing his creations with us.
•••

6L6 said:
The “turbo” effect is depending on the temp coefficient of the MUR3020 specifically.
Click to expand...

Well, there are not enough of the Vishay in stock, so it’s kind of a moot question…

Either should work fine.
•••

Not really, I am at no rush at all and could wait.
Working on several other projects.
•••

Are you not using a standard chassis with big heatsinks?

Edited to add - In some schematics those are an output pair. Too many schematics and designations. You posted clarification after I had posted. I like these, but there are a bunch of options.

6L6 said:
Member chuckd wrote a wonderful bias procedure, here it is so it's easy to reference.

After you have completed your build you need to bias the output (measured in mV) in order to generate enough power to activate the MOSFETS. You need to do this while keeping the DC Offset (the potential across the speaker terminals) at 0V. This is achieved by increasing gradually, in an alternating pattern, the resistance of P1 and P2. You are not directly measuring the resistance but the voltage across P1 and P2.

Set P1 and P2 to 0Ω
Setting these to 0 prevents current flow through the FE stage while you power up the amplifier. To make sure you are starting at zero bias at the beginning.

hello, new bee here with a question? i have a problem with not able to get enough bias on my newly build f5 turbo. i was able to get 250mv but for some reason i ran out of adjustment. any help would be appreciated.
•••

give details aboyt JFets are using (rang, measured Idss) and point us to reference schematic

pretty much - all you need is to increase resistors in parallel to trimpots in drains of input JFets
Click to expand...