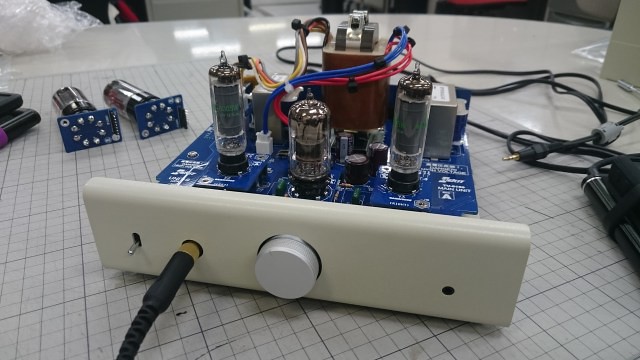 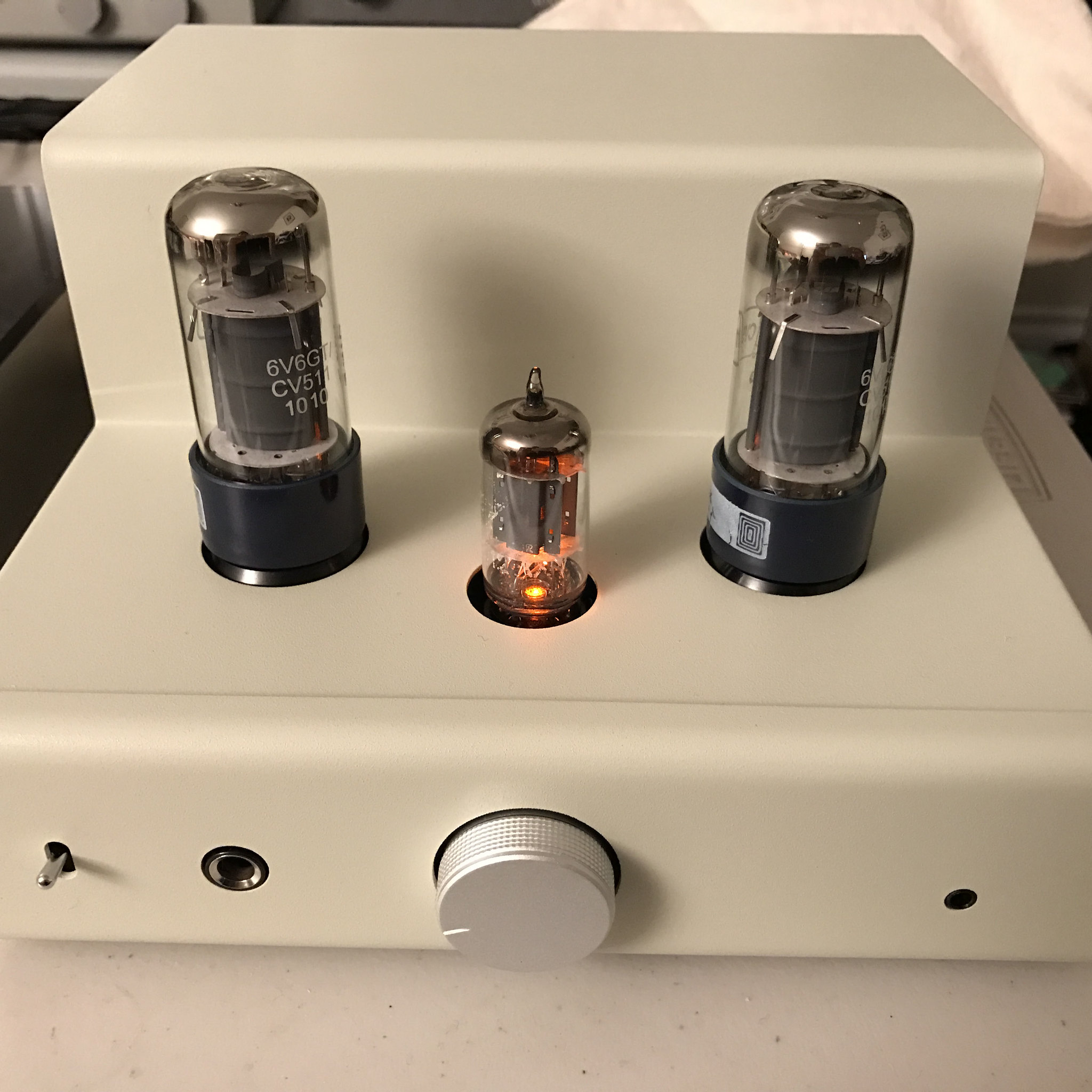 Hi Viktor, do you happen to have any pictures of the circuit boards or a size comparison to the TU-8200?

Thanks, and I'm glad to see Elekit putting out so many awesome kits!
•••

Here is the review from Doctor John

Comments Let me cut to the chase: this little amp is now my favorite Elekit amp!

Operation Ultra steady. I have it on all day and it barely gets warm.
Sonics It is always hard to describe the sonics of something. For this amp, I would choose Fluent. Many tube amps are easy listening, sometimes referred to as "liquid", but that is not at all the equivalence of fluency, which mandates a good sense of rhythm and superior transparency. Nothing about the TU-8150 grates on you, and everything contributes to keep your interest. Playing disc after disc attests to the superb musicality of this little amplifier with a big heart, neigh, soul!

As Amplifier As with most flea powered amps, particularly if you play vinyl, personally I'd use this with a Preamp to maximize the gain and delivery of the first watt. However, it will sound pretty good as an integrated amp (my System III's Schiit is essentially passive volume). Volume Knob Setting when used as Amp The TU-8150 employs an IC in its preamp section, so it is not just a passive volume knob on an amp. That said, I found not much degradation when the volume knob is maxed out - no overloading or undue hardness. Dialing back may bring a tad more refinement, but the optimal setting is likely dependent on the rest of the system. I have it anywhere between 12:30 and 3:00 Power My YL horns are 104 db, so I have no problems, even with big pieces, as you can read above. I'd think it will work well with loudspeakers over 90 db in sensitivity. Just for the hell of it, I did briefly hooked it up to the LS3/5A, but even with volume knob of both amp and preamp maxed out, there was only moderate volume; however, even then the music sounded nice and lively, not seriously compromised nor muffled, which to me means loudspeaker matching will not be too difficult in general.


As Headphone Amp I think this shall make a very nice headphone amp. But make sure the loudspeakers are connected if you even want to pull out the headphones.

Hybrid? The presence of an op amp in the preamp stage will turn off some tube purists. But I ask myself, do I actually heard sand? Honestly I cannot say I do. The sound is rich and creamy when it is supposedly to. I have heard many all-tube amps that sound a lot more transistory (like German Octave, not to my taste). Elekit has had a long history of using IC/op amp in their products and the designer's skill is apparent.

6AQ5 vs 6V6 In my listening, the 6V6 is unquestionably better. I am staying with 6V6 just because I have a large stash. Although electrically similar, the bigger envelope of the 6V6 likely confers an advantage (just as 6SN7 has it over 6CG7). However, I am equally sure the performance of the 6AQ5 can be much enhanced by rolling in older and better tubes. The suppled GE's are coded 82-52, which is from the very end of 1982, just before tube productions ceased altogether. Older 6AQ5's are plentiful and cheap and one can have fun rolling tubes.
Last edited: 2021-10-06 11:39 pm
•••
P

The 882 uses low power double triodes and has 3 taps on its output transformers. It works the best with low impedance (<80 Ohms) and high sensitivity phones. It is somewhat brighter than the TU-8200, at least with stock tubes.

High impedance phones with more-or-less natural tonal balance sound better via the 8200 to me - much higher driving ability and more mature sound. Note though that I have made significant modifications to the 8200 as I described elsewhere.

A few years ago when it was released, I was considering building the TU-8150 as a secondary headphone amp but then I dropped the idea. Note that even though the factory leaflet may give the impression that the opamp, which is visible on the pictures above, was implemented to amplify the signal from portable devices connected to the jack input, it serves as a driver and is always in the signal path.

I gave the 882 with my old Sony headphones to my friend and he is very happy with them.
•••
R

The op-amp in the 8150 can be removed as the feedback resistor will act as a signal path to the grid of the 12AX7 driver tube. I had removed the op-amp since day 1 and used it to drive my HD-650 as a desktop amp in my study. More then enough power to drive the headphones as my source is a DAC with full 2V output and low impedance. For purists, one can connect the input directly to the grid of the 12AX7 but I don't want to sabotage my amp.

The 8800 has a much better bass likely due to the bigger transformer (I did upgraded to Lundhal transformers and the output tubes are still 6v6s in UL mode).

Overall I am happy with the 8150 as a headphone amp. 6V6 is a magical tube, with sonic characters very similar to low power DHTs.

I post the cropped section of the schematic of the 8150 showing the op-amp section to illustrate my point. I think this is fair use and should not violate copyright.

rtsang said:
(...)For purists, one can connect the input directly to the grid of the 12AX7 but I don't want to sabotage my amp.
Click to expand...

Thank you, I have the schematics from Elekit. I would have done this mod if I had ordered the amp, but I need a parallel SET amp much more than a simplified version of the TU-8200.
•••
P

This thread raised my interest in this amp again. I have ordered one of the remaining units from Victor. I will build it without the OPAMP stage except for the smoothing capacitors that can be used in the DC heater, as I do not need the 2x additional gain from the RCA input.
•••
C

I have been in possession of my new TU-8150 for 2 weeks, kindly built and sent to me by Victor. I love this amp! I'm bad at describing sound but I will say I agree wholeheartedly with Dr. Johns description, especially the terms "rich and creamy". This little amp has rich tone too spare! I'm using some NOS RCA 6V6GT tubes with the supplied JJ 12ax7, but this morning I ordered a NOS RCA 12ax7a to replace it.

This kit according to Elekit has been discontinued, but I believe Victor has a few more. The 2.9 wpc has to be a very conservative rating. Sounds more powerful than that, but still has all the fleawatt qualities. This is probably due to the op-amp. The stock 4580D sounds really good and I doubt I'll be rolling anything fancier onto the circuit board.

As I wrote earlier in this thread, I would order one of the remaining amps from Victor. I have built it since then and also redesigned even more than the TU-8200, but I thought I would not add any comments here because it is discontinued. Now that it came up again as a recommended product, I am afraid I need to add my concerns. With all respect to Elekit, the simplification of the circuit in this low budget amp went a bit too far, some of which has serious, even potentially lethal consequences.

The unit has an IEC C type power socket, which has no ground pin. It is fine with plastic 12V walmarts, but certainly not with a mains powered tube amp with metal case, which has almost 300V all over inside. Other than that, the unit does not have a real fuse, just a PTC. PTCs should not be used as primary circuit breakers in mains operated units. This amp does not meet even the basic safety standards, and should not be operated without additional grounding.

The power supply for the OPAMP is derived from the DC heater of the preamp tube, and is rather noisy. This stage has about 1.6x gain from the line input. If your source can provide more than the standard 2V, then it can easily overload that stage. Turning down the volume does not help as the clipping happens before the volume pot. I build my unit without this stage in the first place, the input signal goes to the potmeter directly.

The 12AX7 is not meant to be a driver tube for power pentodes, especially not with 0.75 mA bias current. I was not surprised to hear that even though solo instruments sounded great, the sound became congested with complex music passages, even at low volume. I redesigned this part with 12AT7/ECC81, which now has a much healthier 3.5 mA bias current with a slight loss in gain. It still has enough gain from the line input.

The channel separation is rather poor at lower frequencies, because the simple RC filter being used for power supply hum suppression in the driver stage is shared between the two channels. (The TU-8200 has two separate FET filtered stages for the same purpose.)

The caps in the power supply are somewhat undersized especially with 50Hz AC voltage, similarly to the TU-8200.

I could work around most problems except for the safety issues, which would require cutting and drilling. The unit is now sitting on my bookshelf as a nice decoration with a pair of 6V6GTs from 1944 installed. I kept listening to my modded TU-8200.
•••
C

paczeltf said:
With all respect to Elekit, the simplification of the circuit in this low budget amp went a bit too far, some of which has serious, even potentially lethal consequences.

The unit has an IEC C type power socket, which has no ground pin. It is fine with plastic 12V walmarts, but certainly not with a mains powered tube amp with metal case, which has almost 300V all over inside. Other than that, the unit does not have a real fuse, just a PTC. PTCs should not be used as primary circuit breakers in mains operated units. This amp does not meet even the basic safety standards, and should not be operated without additional grounding.
Any ideas on how to add additional grounding for the technically limited among us (i.e. Me)? Would any IEC C7 adapters provide more grounding?

Any ideas on how to add additional grounding for the technically limited among us (i.e. Me)? Would any IEC C7 adapters provide more grounding?
Click to expand...