I have a lot of questions.

Gear:
I have a pair of EV DH1A drivers.
Specs: http://www.electrovoice.com/downloadfile.php?i=971741

I'm planning on buying a pair of tractrix horns from stereo-lab.de:
http://stereo-lab.de/Horn-cf-450-Hz...uency-spherical-wave-tractrix-waveguide-lense

Im uncertain of which 12"/15" woofer that suits this setup - it needs to be a woofer that is buildt for being used in open baffle constructions.

Reason of choise:
I want this setup to be more integrated in my apartment than previous hifi solutions - the WAF, but still a sound I will find intriguing.

My plan ( with a lot of holes )
See attached renders and digital drawings.
I want a passive dividing network for this two-way setup.

I want the speakers to be driven from my current 2a3 tube DIY amp or my Quad II's.

2. What type of passive dividing network?

3. How much calculations / simulations has to be done? - asking since I do have very little knowledge on the subject.

Since this is a multiway speaker, you may receive more responses on that part of the forum. However, re the questions:

1/ Depends on how you want to design the speaker. There aren't many drivers specifically designed for use on OBs per se; just drivers that are more or less (naturally) suited to it. Assuming you don't want to use excessive Eq, what you need is a driver with a low mass-corner (2Fs/Qt). You will probably end up with a high Q driver, simply because there aren't all that many low Q woofers on the market that also possess a low F0 (Fs). The driver will also need to have reasonable suspension travel. Xmax provides a general indication, but don't take it as gospel, because there is no industry standard definition for what Xmax actually is. There are about a dozen different ways of generating a number for it, and they all give different results if applied to the same driver.

2/ One which is designed for your speaker.

OK, 2/ & 3/ were partially tongue in cheek, but the message in both is good. Basically, there's a lot of work involved. You have to design a speaker; you can't just throw a bunch of drivers together, a handful of components, and say 'job done.' It doesn't work that way. Short version: you need to:

-Have accurate impedance responses of your chosen drivers in the enclosure / on the baffle they are to be used in / on.

-Once you have these, you can design your crossover network. The frequency, order (note that the acoustic and the electrical orders of a filter network are rarely one and the same) and type of slope, e.g. Bessel, Butterworth, Linkwitz or whatever, along with any shelving or notch filters will all be determined by your desired outcome, since they all have their own particular balance of advantages and trade-offs. If this is sounding complicated, that's because it is. Very. I'm not trying to put you off, but it's better you know now what you're facing, rather than plunging head-first in & getting yourself into a complete mess you'll struggle to get out of. It's a fascinating hobby and very rewarding, but you get out of it what you put in.

Now, your EV drivers state a 500Hz minimum XO frequency, and that will likely be based on its FR, distortion performance & power-handling, assuming a 2nd order electrical (most likely Butterworth) at that frequency. The actual acoustic frequency response of the driver will be modified by the horn you're planning to attach to it, so you'll really need to take the FR of the driver in that horn, in the baffle, at the desired listening axis or range of axis to know for certain exactly what you have to work with & what the optimal XO will be for your particular goals. The same applies to the woofer of course. 500Hz isn't a bad XO frequency actually, based on the power-distribution of, say, orchestral music, and it was quite a popular XO frequency back in the 1960s as I recall, especially for systems with big woofers, and either compression mid-tweeters, or multiple midrange & dome tweeters to get sensitivity up. However, as noted, if you don't want to be wasting a lot of time guessing, you'll need to find out exactly what you've got to work with.

Top tip: ignore on-line crossover calculators. Don't even think about it. They assume the driver has a flat impedance, and a flat frequency response. If it doesn't have either of these things at the XO frequency & for about 2 octaves either side of it, your filter (and speaker) won't behave as you're expecting. Electrical and acoustical slopes are additive. If a driver has, say, a natural 2nd order rolloff in the low frequencies, and you put a 2nd order electrical XO high pass on it in that region, you'll end up with a 4th order acoustical rolloff slope. And so on.
Last edited: 2016-03-06 4:23 pm
•••

These are the only specs I found, so my question is; do you really want a driver that only plays down to ~60 Hz? 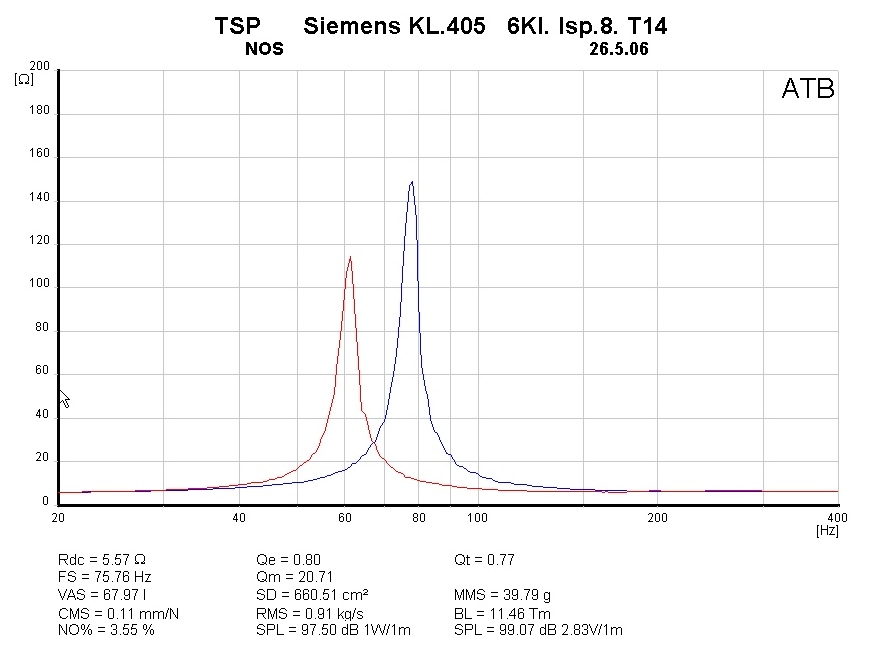 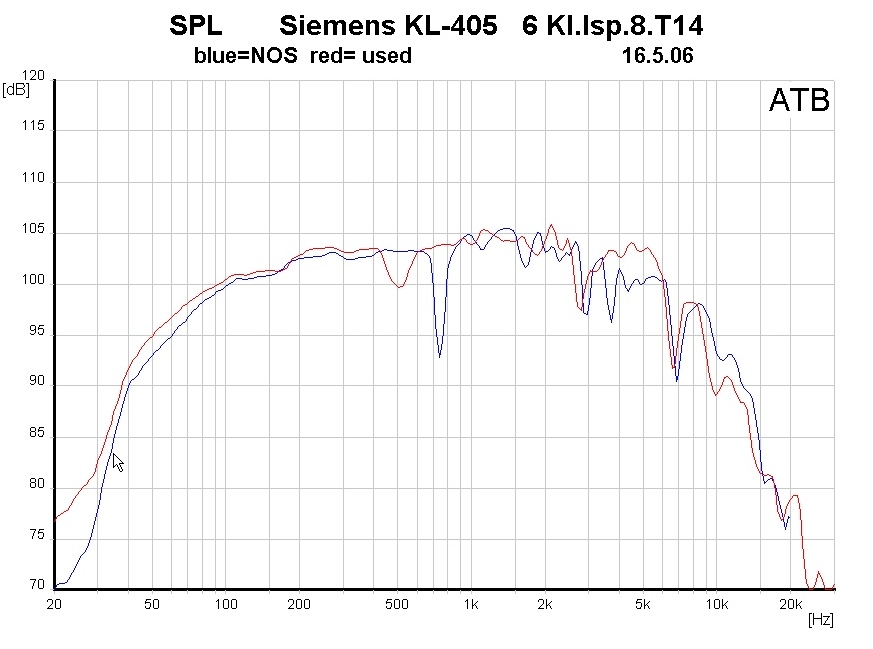 500 Hz appears to be the Klangfilm standard for this size horn: Klangfilm Home!

Thank you both for giving a replay.
If I proceed with this project I will probably need a digital ( active ) crossover.
Designing a passive crossover for this setup will be too much to handel for me in the first place.... I guess

OK. I think I understand. This is not "that" easy as I thought it would be. I will need measuring gear and software. So..

1. How low , budget wise , can I go in buying measuring gear ( microphone and software ) ?

Is this item a good choice for a starter : https://www.minidsp.com/products/minidsp-in-a-box/minidsp-2x4

Or will I need to buy something like this:
CLIO Pocket | Audiomatica Srl

In the first place I´m finding it difficult to play all analoge sources through a digital dividing network. Maybe I just have to get rid of that thought : right now... !

2. Regarding the KL405 ( the driver that started this Quest for me... ) : it is a really expensive driver . I`m quite sure that a new ( with a lower price tag ) driver in same size will be a better choice: for example: Audiophile-grade 15" Open Baffle Woofers

GM said:
500 Hz appears to be the Klangfilm standard for this size horn: Klangfilm Home!

Thought it was looking favourite. Or at least ballpark anyway.

If I proceed with this project I will probably need a digital ( active ) crossover.
Designing a passive crossover for this setup will be too much to handel for me in the first place.... I guess
Click to expand...

Maybe. Depends what responses you end up having to work with. The advantage of digital filters & EQ (other than reduced losses) is increased flexibility, or at least rapidity of changing the XO design. They don't necessarily make the XO design itself easier, since they don't alter the fact that the inherent driver behaviour still needs to be factored in.

1. How low , budget wise , can I go in buying measuring gear ( microphone and software ) ?
Click to expand...

For 'end user' rather than 'driver designer', Holmimpulse & REW are free. Moderately steep learning curve, but they do the job well. About $100 of USB microphone will get you near-enough for what you want to do in terms of designing a crossover.

In the first place I´m finding it difficult to play all analoge sources through a digital dividing network. Maybe I just have to get rid of that thought : right now... !
Click to expand...

That is one of the downsides of digital crossovers. Not everybody wants to run an analogue signal through them, which is fair enough. Plenty of arguments claiming 'it doesn't make any difference' -well, maybe. Depends on the specifics, so as ever YMMV on that one; it's as much a philosophical as a technical question for the individual.

Regarding the KL405 ( the driver that started this Quest for me... ) : it is a really expensive driver . I`m quite sure that a new ( with a lower price tag ) driver in same size will be a better choice: for example: Audiophile-grade 15" Open Baffle Woofers
Click to expand...

Perhaps. Q is a reasonable match for a baffle, although as GM notes, the 60Hz Fs is a bit high, so if you can get something with a lower resonant frequency & mass-corner that would probably be advantageous.
•••
A

GM said:
These are the only specs I found, so my question is; do you really want a driver that only plays down to ~60 Hz?

More pictures on Klangfilm home page of course. Among my files I found another impedance plot for 405, which is however
not the driver of choice for the topic "Klangfilm Eurodyn w. 15" woofer". This one confirms the red curve in your contribution.
Impedance peak is at 194 ohms, indicating a very high Q.

I suspect that the driver measured with the blue curve of post 3 has a problem, for instance dust in the gap.