Can bias transistor mount on top(body) of output transistor??

Rotel use to do so in some of theirs power amps, namely in the RB-980 BX ( a tipple follower with 3 parallel output devices per rail )...
•••

I have seen it done in many amps, so I see no problem in that
•••

Yes.
There even transistors which have the bias (diode in this case) inside the transistor case.
•••

Douglas Self, in his writings on amplifiers in Electronics World ten years ago has discussed this in some detail. He has found that one gets a quciker, and more dependable response, mounting the bias transistor one of the output transistors, than on the heat sink, as the heat sink has a temperature lag compared to the transistor itself. I have tried it on his amp, and it works extremely well. I would think that commercial builders would stay away from doing it because it involves hand work, rather than the quicker and more economical robotic assembly. Try it--you will like it.
•••

this is done from some companies when the cooling is not enough and or the design of the amp is case sensitive to thermal run away .....

like if it gets warm any way and this tents to multiply after some point of heating then they need bias to go down quickly to avoid thermal run away ......

lets suppose that you do this and attach the bias transistor over the power transistor ...... you sould try that once with a very efficient heatsink .....and then a gain with a less or terribly eficient hetasink .....

i thing that if you do this and the heatsink you use is terrible your amp will work safelly but sound is going to be crappy since bias might get too low .....

the best will be to have some way to make amplifiers operate in a standard temperature like cars .... the best of performance for my car is 85 degrees celsious ..... ( since the car is old and suffers from various things when the weather is cold this cannot be reached and car works in a lower temperature..... this increases consumption at least 20%.....)

Re: to my understanding

Sakis, I have to diagree - your justification is wrong!

The winner is Cornelis Spronk, because the reason for mounting the sensing element directly to the sensed element is that the bias stability (junction temperature / idle current) is better in this case.
See AKSA's amplifier KIT for reference - Hugh Dean might visit the thread and tell us his own justification (namely he using the same approach related to the sensing element).
•••

Best discrete solution I hav e found is still to use a small SMD transistor and mount it close to the collector (assuming TO247 packages) lead on the PCB. This gives fastest response and involves no 'hand work'. I use it am am very pleased with the results - its also stable once set up.

This subject comes up every few months . . . would b e nice if we could link all the threads on it.
•••
N

That sounds really cool. Would you happen to have a pic of this?

Answer: Yes
My Class A amp with tiny mosfets and a small BS170 as tempsensor 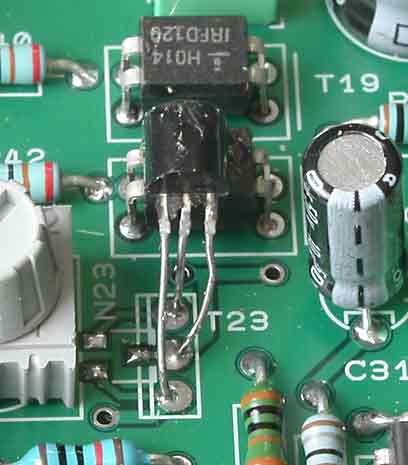 Hint: If ýou have mosfets as output transistors you'll need -10 mV/deg C and a BJT has only 2 mV. A small BS170 mosfet works splendidly.

Here is my implementation. I have revised my boards (but not made them yet) to move the sensor transistor (BC847) slightly away from the legs to help with mechanical assembly. Initially I put some thermal grease over th e sensor transistor and the TO247 collector lead, but that tended to overcompensate (so Iq would decrease when the amp warmed up). I have no grease now (so its like th e photo) and I am pleased with the results. My amp is biased at 150mA per output pair (5 pairs).

BTW I use a 2 transitor Vbe sensor scheme. Output stage is a standard triple on 0.3C/Watt heatsink.

all opinions writen in the above posts

but i belive that a test like that should be done ..... I actually did it my shelf in a small scale of course and with a amplifier with 2 transistors

i made one version with bias transistor mounted on the heatsink ( but poor hetasink ) and one with not ...... ( at all )

second version with the bias transistor on the air makes better sound but since amplifier is too small ....like 50 w there is no question of thermal run away .....

the same amp that has temp sensing doesnt play so well when hot ....

see rod elliot notes about this regarding Po3.......

of course P03 is a toy that sounds nice is not a sofisticated amplifier or a high power amplifier ....

then the truth sould be somewhere in the midle ..... like bias transistor should be mounted close to power bjt but not too close and also with proper end eficient heatsink for the all system
•••
A

Sorry Sakis, I have to disagree again - in my opinion you're completely wrong in this matter.
•••

i will not argue

about this i am always willing to listen but try also

and then on the other hand a gozilion of amps ive repaired so far share the same tactics about bias transistor .....

suppose that amplifiers had some way car technology like water cooling and standard operation temprature will be ever a question of mounting bias transistor on the heatsink ????

i think not ...actually thermally coupled bias transistor will not be even needed a network of resistors or ccs will do the same job since all this will be not temeprature depending ...

but thats my opinion ...thats all

thanks guys for leting me share my opinion about this
•••

on the other hand

there is something else crossed my mind about this .....

this what you said will start to make sence if you create a margin which inside there is going to be operation area for the bias transistor .....

like do not allow to go higher or lower than specified ....but then will this keep amplifier stable suppose that is abused ????

or in this case if amplifier is abused in a way and then too warm and then bias is canot go lower cause of the margin you created then booom !!!!! if no other mesures taken to avoid overheating ......

it all ends up to the same thing : temprature should be stable and bias transistor should be able to make only small correction
•••
A

Here's how I did it. Sorry about the pic quality, cheapo camera.
The strap is a phosphor bronze spring (these were used 25 years ago in the original "Metal Mickey" VHS recorders in the cassette housing to open the tape flap" Perfect for the job, sensing transistor is TO92 package, the thermal washer improves heat transfer. The gunk on the wire is silicon rubber, just to prevent any shorts.

I have some sospect that overcompensation using thermal grease is due to too much grease and it's big thermal inertia (not sure it's the right word, my english is very bad) respect the small SMD sensing transistor.

I'm not sure that your thermal coupling without phisical contact has a quick bias response, but I think i'll try it.....
•••
A

I'm not sure that your thermal coupling without physical contact has a quick bias response........
Click to expand...

try gluing the SMD (sot23) thermal sensor direct to the drain/collector lead as close to the device package as possible.
Use two (diode connected) or three (Vbe multiplier) flying leads to connect into PCB.