Anyone recognize this woofer?

There´s so many red flags raised by that piece of Advertisng that 12" vs 15" woofer diameter wouldn´t be my first concern.

Who cares they are "near" a car body factory which disappeared some 70 or 80 years ago and is wholy unrelated to them?

FWIW I am 60 meters away from where Buenos Aires was founded for the first time, in 1536.
Maybe that influences the sound of my amplifiers and speakers?
••• 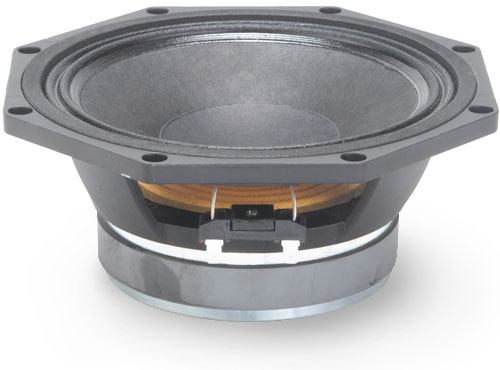 It's a nice combo, just a lil' overpriced

All of B&C 8" woofers use the same cone and surround, if I'm not mistaken. My money is on the 8PS21 because it's the best suited for a two-way, and the efficiency matches.

They have some neo midrange models which are even MORE efficient, but they won't play as low.
•••

Well but we know it's a lie about sensitivity because of BSL. B&C makes models that can do 50hz, but BSL will still land them fairly low sensitivity. The good side would be that they could take hundreds of watts without blinking and eye or thermally compressing into nothing.

I've seen a talented designer make something similar but with a 10" woofer and could only squeeze and honest 91db at 55hz -3db I think it was, maybe slightly higher.

It would be interesting if a pro company could possibly make something more sensitive but play lower. I know there are lots of compromises because you're fighting physics the entire way, but the market is RIPE for it.
•••

Destroyer OS said:
It would be interesting if a pro company could possibly make something more sensitive but play lower. I know there are lots of compromises because you're fighting physics the entire way, but the market is RIPE for it.
Click to expand...

That's like saying "I wish Ford could make a Mustang that goes faster and gets better mileage."

These two things are mutually exclusive. For instance, the B&C 8NW51 packs a TON of neodymium into the motor, raising the efficiency by a few dB in the midrange, but at the cost of output at lower frequencies.

This can be compensated, by putting the woofer in a back loaded horn, but it definitely makes things more complex. It takes a lot of money and effort to 'eke out' a couple dB more in efficiency. And in an era when amplifiers are basically free, it's hard to justify that.
•••

Yes, I see the problems. QTS below .30 really becomes difficult too because the lower you go the better it sounds with less feedback... so you end up designing for particular amplifiers and then you need more and more sensitivity...

Although I do wonder if not having the woofer play as high, as it might be easier to use a horn type tweeter that players lower than wanting your woofer to play higher... The pro world likes woofers playing high without huge breakup, distortion, etc, but for non-pro world we don't have the same requirements exactly.
•••

If you want high efficiency and wide bandwidth, check out Unity horns.

By putting four drivers very very close together, you get them to behave as if they're one large driver.

By doing so, you can get the efficiency to exceed 100dB, while also attaining high power handling.
•••

The size will be large to get bass. But yes, they are appealing for what they do. I still don't fully understand how the small opening doesn't cause problems with all the pressure in the cavity between the woofer and the opening.
•••

One of the best ways to have small bass I've seen is going BP, but people have an aversion to it. Also they don't do well very close to walls...
•••

I don't think it'd be possible, unless you alleviate the baffle-step losses by wall mounting.

If you did that, I'd expect one of 18Sounds 6.5" midbass drivers to do the job just fine.