I'm looking to purchase a Tec-on SE34i amp -- it's a stereo single ended EL34 amp.
Does anyone have one for sale? PM me, and reply to this thread please if you do. Your question suggests you don't think it's worthy of ownership.
Does that mean you'll sell me yours then?

Was there known issues with this amp? Never seen this particular brand before.

This company has been gone for the better part of a decade, what do you plan to do if the power transformer goes up in smoke or you have some other issue?

I have a Chinese single ended EL34 amp that I would be happy to sell you for $200. It's a piece of junk that doesn't come anywhere near its published specs, I would suggest buying a Magnavox console amp or saving up for a used Jolida instead.
•••

audiowize said:
This company has been gone for the better part of a decade, what do you plan to do if the power transformer goes up in smoke or you have some other issue?
Click to expand...

Might be quite straight forward, as the amp is all p-p construction, and looks to be decent based on the pic. So, apparently this particular amp is based on the Separo SEKT88 amp, also sold under the name Pacific Creek.

I would take this amp over any of the other Chinese amps built on PCB's, and that includes Jolida.

I measured a Pacific Creek EL34 push-pull amp. It claimed something absurd like 50 watts at 5% THD. It actually produced 5W at 5% THD. It is the worst amplifier I have ever measured in terms of what it claimed vs. what it delivered.

In the same session, I measured a pair of McIntosh MC-30s that made 32W at 3% THD, so there wasn't anything wrong with the test setup. I also measured a Yaqin amp that made a respectable 32W (also an EL34 push-pull amp) even though it claimed 45W. It didn't really have much in the way of output below 30Hz, but still OK for the money.

I do remember the Pacific Creek literature bragging about only using a few dB of feedback, and I suspect the amp wasn't stable with much more than that (an issue of transformer quality). Unfortunately that meant that the performance was exceptionally sub par. I don't remember what the damping factor was, but it's going to be very low! (1 at the most)

I do not remember seeing any counterfeit parts in the Pacific Creek amp at least. I would take the Jolia or a Cayin push-pull amp over that Tecon any time.
•••
T

Sometimes I have to laugh at the DIYAudio swap meet threads.
I was pretty sure I posted a WTB request.


I'm not sure what any of that has to do with my request. One thing I'm pretty sure of - I don't think Audiowize will be competing with me for the purchase of a Tecon SE34i. Anyway, thanks for the opinions.

Does anyone have a Tecon amp they'd be interested in selling?

vinylkid58 said:
So, apparently this particular amp is based on the Separo SEKT88 amp, also sold under the name Pacific Creek.
Click to expand...

tronan said:
That he measured totally different amps made by other companies and some of them weren't up to spec.
Click to expand... 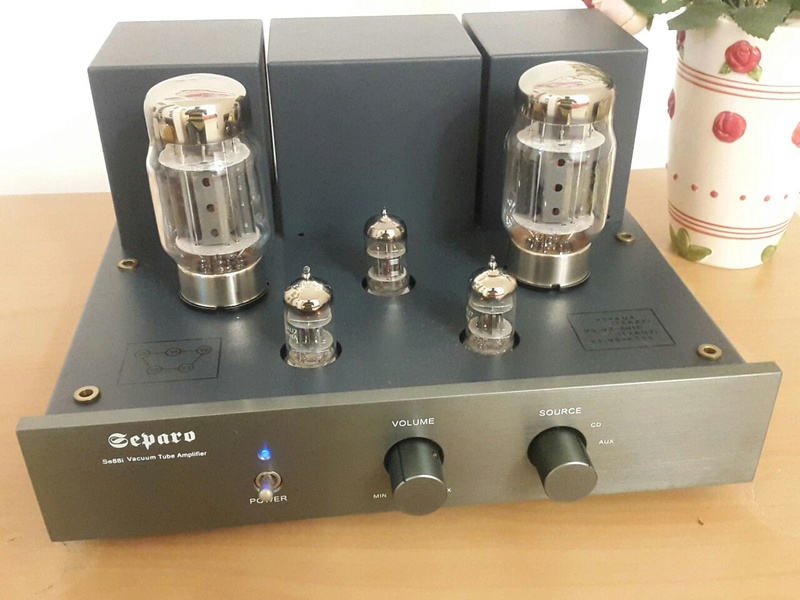 It sure looks like the same company to me. If you want to knowingly buy junk, that's cool. I'm just sharing my experience with Pacific Creek/Separo.
•••

You never asked Tom's intended purpose. Junk or not you cannot build an amp like that for its used price whenever available. Perhaps, he just wanted a basic amp with solid construction with all the bells and whistles included so he can modify it to his heart's content. It's all point-to-point wiring so it will be an easier mod than one with circuit board. Who cares if it measures like junk in that context.

Try go out and build a SE amp from scratch buying chassis, faceplate, sockets, transformers, terminals, binding posts, connectors, selector switch, volume control, toggle switch, IEC socket, power cord, tubes, caps, resistors, etc... and that's not counting assembly work. The money adds up and even if you buy a kit it will still cost more than a used Chinese amp. After spending and putting the whole thing together, it will still look like a Frankenstein garage job that the wife will hate. Cheap Chinese amps are a good foundation for mods. I have built amps from scratch before and it has its own satisfaction but life is short, I prefer to get an inexpensive amp like the Tec-On and modify the hell out of it and it will still look decent in the cosmetics department. At least more than half of the work is done for you as the architecture is all there, you just have to deal with the interior design. After all this is a DIY-audio forum.
•••
K

I happen to own one of these Tec-On Se34i amps. In fact I just put it back into use 2 months ago after a long rest to power some speakers that my home built 2A3 SE and home built 6EM7 Se amps cant drive. Years ago I modified it by removing the awful Negative Feedback circuit and upgraded the many of the remaining caps and resistors. Removed and replaced the RCA connectors to the front top of the chassis, shortening the wire run, which was replaced with single strands cat5 wire from an upgraded volume control. Upgraded the tubes and changed the EL34s to JJ KT77. I think the amp sound pretty darn good for the money invested, much less than my home builds. The cherry on top is the chassis. It is very heavy gauge steel and nicely painted. The anodized front panel is nice too. A very nice presentation. So nice in fact I have for years been looking, unsuccessfuly, for chassis' of similar quality. Last week I left the amp on for 5 days, went out of town, to come back to reduced power to the left KT77 tube. Turned if off overnight, swapped tubes and the tube powered up but lost power over 10 minutes as the power transformer heated up. Without investigating the circuit Im guessing as of now its the power transformer. If so I will gut it and rebuild it with one of my own EL34/KT77 SE circuits.
•••
Show hidden low quality content
You must log in or register to reply here.
Share:
Facebook Twitter Reddit Pinterest Tumblr WhatsApp Email Share Link
Top Bottom