Wiring line level in ceilings to a central location

Joined 2011
I'm building a new home and wanted to put amplifiers mixers in a central location. My plan was to wire line level signals through ceilings from each room into my cupboard under the stairs.

I've set up a test in our current home (except with AMP in the living room, not in the central location): 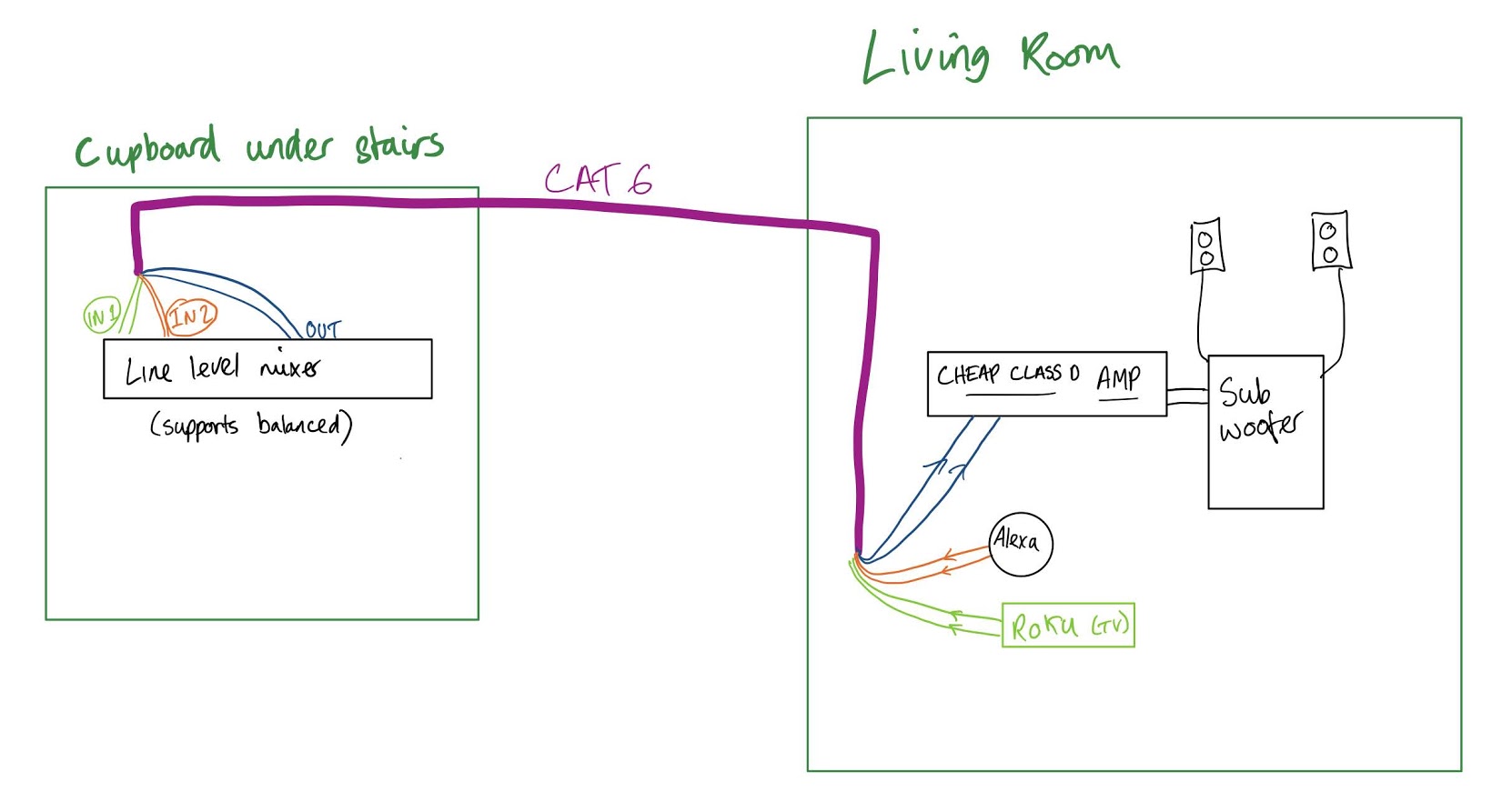 I haven't used a balun or DI box, and there isn't TOO much hum and hiss, it's manageable.

But something strange is happening with the audio from Alexa, it sounds really bad: a lot of hiss and distortion. When you turn the volume down, the signal to noise is so bad that the hiss is really high, also the distortion doesn't really disappear it just gets quieter.

When I unplug the Alexa and swap it out for audio from my phone, it sounds really clean. So you'd think it's a problem with the Alexa. But...

When I say there's a lot of hiss, it's really intense when the Alexa starts up. And the phone has very good signal to noise, hardly any audible hiss, and it's not distorted.

Should I be using baluns, or a DI box or something like that?

I've heard it's fine sending line level signals over CAT6 - indeed with the phone plugged in, it's all good.

Finally, what should I do when wiring the new home up? Should I avoid this complexity and keep wiring local? I really want to aim for whole-home audio, and the audio mixer I am using is a matrix mixer so I can plumb any number of inputs from any room into any number of rooms... which is really good. That's why I'm trying to do it.

Joined 2004
kta-hifi.net
Paid Member
That would be my guess as well. Seems like low pass filtering is required.
•••
E

Joined 2018
Unlikely if its a 3.5mm output jack, very likely to be headphone or extension speaker level.
•••
H

kevinkr said:
That would be my guess as well. Seems like low pass filtering is required.
Click to expand...

1/ Can you explain more about Class D outputs, and how a low pass / high cut filter would resolve that? I'm intrigued, and don't really understand.

2/ The mixer* does have digitally controlled EQ including parametric and high / low pass filters. I haven't had the chance to test this yet but will report back. Is there a particular frequency I should aim for with the low pass?

* It is a rackmount device called the XAP800, used more for hotel / conference address systems than pro audio

3/ I'd like a reasonable quality audio distribution in the new home. Certainly not extremely high end, but hum, hiss & distortion free. Would I be advised to avoid wiring line level audio in the ceiling voids, or is that perfectly acceptable?

4/ Would I be advised to avoid using CAT6 for this purpose, perhaps with some audio balans? If it's ok to use CAT6 with audio balans, can anyone recommend some? I've found 4 types: active DI boxes, passive mono balun from Neutrik, stereo baluns (e.g. Muxlab 500027), and "stereo CAT6 cable extender". Is the last one actually a balun? What should I be looking at?

Sorry for the plethora of questions, thanks for your help.
•••

Joined 2010
The distance between your sources and the mixer inputs may be a problem. Cable has a capacitance per unit length, and some sources may not be able to drive that much. It takes current to drive capacitance, particularly at the higher frequencies. Generally 2 m of cable is okay on most line level outputs.
I've seen parts-express.com have a interface box that carries line level output long distances over cat 6 cable. there is a matching receiver box, sold as a pair. I can't find it today, perhaps you should ask them over the phone. Or since you are in UK, find a local supplier of electronic goods, since this device is obviously made in *****.
If the mixer is near the source, most commercial mixers (like my PV8) have drivers with enough current to drive a twisted pair of up to 33 m. One uses a TRS plug on the twisted pair, with the tip to one side and the ring to the second side. Whatever, a device driving a long run of twisted pair needs to have a power source. RCA plug cables are worse for long runs.
Cable in walls & ceilings usually is required by building ordinance to be plenum cable. If you install some that is not, after a fire your insurance company may not pay the claim.
Last edited: 2020-03-10 3:15 am
•••
E

indianajo said:
The distance between your sources and the mixer inputs may be a problem. Cable has a capacitance per unit length, and some sources may not be able to drive that much. It takes current to drive capacitance, particularly at the higher frequencies. Generally 2 m of cable is okay on most line level outputs.
Click to expand...

Good suggestion so try Alexa straight into the mixer to prove .

If it does make a difference try putting a 100ohm resistor in series with the cat6 hot wire where it connects to Alexa in the living room to try to isolate the capacitive load from Alexas output . I am assuming Alexa has a mono output , otherwise use 2x 100ohm resistors one in each hot output .
Last edited: 2020-03-10 11:12 am
•••

Joined 2004
stephan.win31.de
Bit of an odd problem, really. Headphone outputs generally aren't Class D due to the unbalanced nature of the jack.

OP, how is the cable for Alexa output (a 3.5 mm TRS jack?) to twisted pair wired up? I suspect the problem may be lurking there. Maybe a short between L and R channels that doesn't faze the phone with its more substantial output driving capabilities.

BTW, unbalanced out to balanced in typically works fairly well (and can be improved if output impedance is known), and Ethernet cable is perfectly fine twisted pair, too. The part responsible for the remaining "not too much" hum and hiss is likely to be the unbalanced connection from mixer output to amplifier input. That's a bit too bodgy for my tastes, considering that inexpensive Class D amps are not generally run on floating transformer supplies (I would rather suspect a SMPS with secondary ground bonded to PE).
Last edited: 2020-03-10 12:13 pm
•••

epicyclic said:
Good suggestion so try Alexa straight into the mixer to prove.
Click to expand...

He did try that and it sounded good.

It is a strange problem, and does seem to be down to how the Alexa is reacting to your cable run. I would suggest trying another cable. Run approximately the same amount of CAT6 between the Alexa and the XAP - you don't have to install it, just lay it out. Same problem or not?

If yes, maybe try good mic or instrument cable, like Belden, Canare, Mogami.
Or: Try a stereo direct box that would change the Alexa unbalanced line out to a balanced mic level and make the XAP input a mic level. That might be a better load for the Alexa.

We will be curious to hear what you find.
•••

Joined 2004
Paid Member
FWIW, I've used the XAP DSP boxes for teleconferences several times and they work well. Had to go look up the 800 model as it's been a couple of years As you know, it has 2 sets of inputs. 1-8 and 9-12. You should be using 9-12 as they are the higher impedance line level inputs. Use 1-8 if you need to go to mic level. Be sure phantom power is off. I think 1-8 also have most of the telephone echo cancellation processing, which you defiantly want turned off.
•••
E

hazymat said:
So then I plugged the Alexa directly into the amp and it sounds really good
Click to expand...