A while ago I was in the backseat of my car (2010 Ford Fusion), and I happened to notice the audio coming from the rear speaker sounded distorted in the midrange. I leaned Ford has a special speaker walk test mode that plays a sine wave through each individual speaker in the system (it’s sort of a 6.1 setup with 10 speakers), so tried it. Going around all the speakers sounded fine until it got to the rear center channel speaker (3.5"), which was noticeably quieter and strangely sounded more like a triangle wave than a sine wave. Investigating further, I found an electrolytic capacitor wired to the speaker in series (see pictures), which I understand is used as a high-pass filter to block bass frequencies. I initially couldn’t find the capacitance value on it, but looking at the end carefully the rating might be 68 µF (the tops of the numbers are cut off)? So I tested it and got 77.4 µF, which is about 14% high (not sure what the tolerance is). The resistance of the speaker was 6.9 Ω, which I thought was high for a car speaker. To rule out the amp, I grabbed an old 8 Ω bookshelf speaker that was known good and connected it to the harness side wires for the rear center speaker. I repeated the speaker walk test, and the sine wave sounded normal and was a little louder, so I believe the amplifier is working fine. 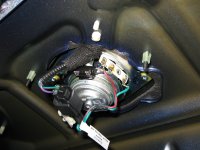 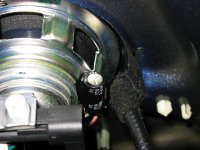 I decided to move on to doing some audio tests on it to find out exactly how it behaves. I used my ECM8000 placed about 2” above the speaker grille with my ART USB box. I unplugged the two subwoofers on either side of the center speaker in the parcel shelf, but the microphone still picks up a lot of bass from the door speakers (couldn’t unplug those). Audio was streamed directly over Bluetooth from my iPhone (it sounded perfect sitting in the front). The AIFF audio files for the tests are included in the ZIP file (22 MB) you can download here:

Here’s a description of the files:

Speaker Walk.aif — this is the built-in walk test. The affected speaker is the 2nd to last and is the loudest. Notice how it sounds different than the other speakers.

Test Tones.aif — variety of tones played through the speaker:

I know the recording is a little quiet and the background noise is high (blame the mic). There is probably also some overlap with the other speakers in the car. But hopefully you can hear the distortion, especially with the guitar.

Now if you open up the audio files with a program like Audacity and zoom in on the waveforms, you can see some really strange harmonics going on in about the 200-3000 Hz range.

^ Yes, that's supposed to be a pure sine wave.

So my question is, based on what you’re seeing and hearing, what is wrong with my speaker? Is it the speaker or the capacitor? Where are all those harmonics coming from? I should mention I tried bypassing the capacitor for one walk test and it still seemed to sound bad.

If you want to know the history, I’ve never had the stereo above 1/3 volume and I don’t listen to anything punchy. Nobody else drives it. I bought the car new with 100 miles, so it’s possible somebody abused it before I bought it and it’s just taken me a while to notice it.

If there are any other tests I can do to help identify the failure please let me know.

Thanks, but can you elaborate on your reasoning here? How does a bad speaker generate those harmonics?
•••
B

Yup, if you tested it against another speaker that sounded good that should tell you that the speaker is bad. I could have figured that out without that fancy test procedure.
•••
B

TechnicalLee said:
Thanks, but can you elaborate on your reasoning here? How does a bad speaker generate those harmonics?
Click to expand...

Could have a loose voice coil or it could be rubbing on the magnet. No fix for that.
•••
T

I workrd as a car stereo installer for years

Check to see if the two little braided wires that run from the apeaker terminal to the voice coil are close enough together to momentairley touch as the speaker moves in and out.
•••
T

Kip McGee said:
Check to see if the two little braided wires that run from the apeaker terminal to the voice coil are close enough together to momentairley touch as the speaker moves in and out.
Click to expand...

Thanks, but the tinsel wires are not touching (they're about 1" apart).
•••
T

My shot in the dark guess would be an intermittent short either in the voice coil or perhaps in crossover components upsetting the amp chip. The chip going into protection could possibly cause that waveform. Replace the driver, then rip the old one apart to find out
•••

Try another speaker to rule out the amp channel. If that speaker sounds good and your test shows no distortion then you know the original speaker is bad. If the 2nd speaker is also distorted the same way then you have an amp problem on that channel. You could also disconnect the speaker and look at the signal from the amp directly with a scope to see if it is a clean sine wave. You could also connect the speaker to another signal source generator and test it out of the system.
Capacitors typically have 10-20% tolerance so it could measure anywhere from 55-80uF. I doubt there's anything wrong with that.
•••
T

Well, I got the replacement speaker installed (only had to take out all the rear trim and seats to do it). The new speaker is electrically identical to the old one, but sounds normal. I even tried measuring the resistance of the old speaker while I pressed the cone in and out to check for any possible shorts and the reading was about the same (7.6 Ω) regardless of cone travel. Pushing the cone in and out yields a very slight noise (have to hold it <3" from my ear to hear), but I'm not sure if a tiny amount of noise is expected or not since I didn't want to push on the new speaker.