Joined 2009
This is a new thread specifically regarding my version of the Murphy Corner loaded line array using Vifa TC9 and stealing ideas from both RA7 and wesayso's line array threads.

Mine will be somewhat unique in that I can build them into the walls themselves so I can get the drivers as close to the corner as possible while also optimizing the enclosure volume.

Still in planning stages, but here's what I'm thinking so far.

- Power through 2 DIY NCore 400 monoblocks
- DSP through either miniDSP or whatever may come with the HT receiver I end up purchasing... perhaps an XMC from Emotiva.
- I have two Stereo Integrity 18' already with the intent of an IB subwoofer but may not use them if I can EQ the arrays to sufficiently represent HT bass.
- Will be building in surrounds into the ceilings (Atmos) and walls
- Room is about 11' wide by 20' deep. I'll throw up a sketch at some point.
- Sources will be a variety of things from SACD to vinyl to CD to HTPC.

And as no thread is complete without some pictures, here is where the remodel is at the moment:

The old room is gone and here we have some jack hammering to reinforce the foundation: 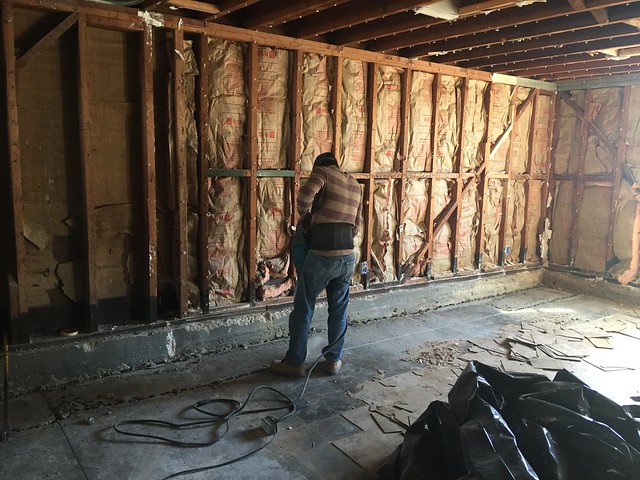 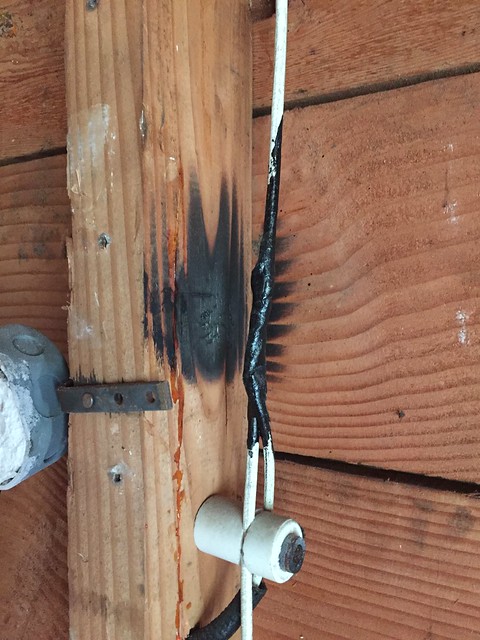 Our house was full of old knob and tube wiring. There are a few spots where it appears the wiring got super hot (short?) to the point of charring the nearby wood! Not sure how this was discovered as it also appears as if some tar or some other insulating substance was applied on the wires. In any case, we're rewiring the entire house so this won't be an issue again. While I'm on the topic though, is there anything I should specify for the HT room itself? I'm not a huge believer in power conditioning or whatever, but thought it would be worth asking.

Finally, in case you're curious... here's a shot of the second floor totally gutted:

This is through the kitchen into the two rear bedrooms which happen to be directly above the first shot.

Thanks in advance for all your help to come!
•••

Joined 2012
old knob and tube wiring is soldered so the burn mark was likely produced at the time it was installed with an old blow torch. the stuff that appears to be tar is the old rubber tape that has degraded over time.
big reno job you've got on your hands!
i guess sound proofing is something that you may have to consider otherwise late night viewing of action movies will keep the occupents of the bedrooms awake(maybe).
•••

Joined 2007
vandermill-audio.nl/
Based on my experiences so far I'd opt for a solution that includes a FIR option in the DSP chain aside from the usual IIR EQ. Maybe something to think about. Even a PC would work and have more possibilities than most MiniDSP offerings.
•••

Joined 2009
Thanks wesayso, that's something I've considered based on reading your thread and RA7's experiences. The whole 2 channel vs. HT thing is making my decision making process a bit difficult. And I'm new to DSP in general so I have a lot to learn to inform my decision making. But the good news is that I have time.
•••

Joined 2007
vandermill-audio.nl/
A software player like JRiver works very well for me to separate the two functions. It has a lot of power built in plus an excellent video renderer. They are currently working on adding 3D video etc. If you haven't tried it download a 30 day trail. Be prepared to buy it though, I didn't want to be without it after those 30 days ran out...
•••

Joined 2009
I'm a Mac guy and it looks like they support Mac. That said, any insight as to whether the Mac version is particularly good or bad? Also, any high demands from a processing perspective? I'd like to run it via a new-ish Macbook Pro (early 2015 - 13" Retina).
•••
C

Joined 2002
As for the electrical - if the home is being completely rewired, at the very least a separate sub panel for the listening room, individual circuits for each component type (source / signal / power), and hospital grade AC receptacles would be worth considering.

But unless the electrical is a a horror show, you'll likely get far better improvement by incorporating sound treatment / isolation in the reno. Earl Geddes published a nice little text on "Premium Home Theatre" a while back, from which a lot can be gleaned that would be applicable to any audio-centric rebuild.
Home Theater
•••

oneplustwo said:
I'm a Mac guy and it looks like they support Mac. That said, any insight as to whether the Mac version is particularly good or bad? Also, any high demands from a processing perspective? I'd like to run it via a new-ish Macbook Pro (early 2015 - 13" Retina).
Click to expand...

The MAC version is younger and less developed. It time it will grow I'm sure, but my praise is for the Windows version. I started experimenting with it 4 or 5 years ago. It suits me well as it continues to develop.
•••

Joined 2009
Bigger issue may be how to get the filter into JRiver. Looks like DRC and RePhase are PC only. Can REW create the filter file? In the wiki, it says that it does not support linear phase filtering which I take to mean the filters are only good for IIR.
•••

Joined 2007
vandermill-audio.nl/
While that is true, you don't need the DRC/RePhase programs for playback. Just for the task they can provide after you've made your measurements. Meaning it can be done on a PC anywhere and isn't part of the chain. Aren't there Windows emulators? I really have no clue but I'm sure this step isn't your biggest hurdle.
•••

The Mac version of JRiver was always a little behind, but mostly for video. They do offer good quality video in the latest version.

Another very nice , but music player only, is Audirvana.
•••

Joined 2009
Ooo... I was dreading installing parallels or something but WINE sounds perfect! Thanks for the tip!
•••
R

Joined 2009
Paid Member
Hello! So, this is the thread. Looking forward to how this unfolds. I am with Wesayso on the FIR part. It is a no-brainer really. JRiver+PC based EQ and crossover (for HT and subs, maybe?) is the way to go.

One thing I will warn you about JRiver is that it cannot play movies natively like you can on a Blu-ray player. You need some sort of decrypter to unlock the discs. This has been a big problem for me as I don't want to mess with a subscription to decryption software. Once unlocked, JRiver is good about playing the thing and showing you options, etc. And for audio only playback, there is no competition for JRiver, IMHO.

Another thing to be wary of is delay introduced by convolution. If you are playing within JRiver, then the audio and video will be automatically synced, but if you are playing Netflix from a browser, there may be lip sync issues if your convolution file introduces a delay. They used to have a Netflix plugin within JRiver, but Netflix has since denied them this facility. Audio/Video sync will be a problem even with a dedicated FIR box, for example, the one from MiniDSP. JRiver is ahead of the rest in that it automatically syncs video if you are playing inside JRiver.

All this sounds complicated, and it is. There are solutions, but you have to be able to invest the time. I am just about comfortable with JRiver's audio setup, but I have not figured out a comfortable solution for the movie part yet.
Last edited: 2016-05-03 3:02 am
•••
R

Joined 2009
Paid Member
I should ask, Wesayso, what do you do for playing movies through JRiver? AnyDVD?
•••

oneplustwo said:
Ooo... I was dreading installing parallels or something but WINE sounds perfect! Thanks for the tip!
Click to expand...

Yep, it works fine, but there is occasional glitches, like it tries to redraw the window sometimes. Nothing major and all functions of DRC work as they should.

REW has a Mac version as well, so no problem there either.

I use XLD to convert my files from .wav in REW to .pcm used by DRC. Works great.

Joined 2009
Well, I got WINE installed and it seems to run DRC fine. I'm not sure I quite understand how to run DRC yet so I'm sure I'll be asking for help here. I can't seem to find a DRC for dummies resource anywhere but maybe someone here can point me in the right direction.

So you need to run REW too? Is that just to generate the sweep.pcm and inverse.pcm files? And then you use XLD to convert the .wav files from REW to the .pcm files used by DRC?

This sure is complicated!
•••

ra7 said:
I should ask, Wesayso, what do you do for playing movies through JRiver? AnyDVD?
Click to expand...

For now I just rip every disk I want to play to hard drive in a mkv container. I cannot play DVD or Blu-ray directly without troubles. There are a lot of tools to store movies in mkv files. Not ideal by any means but it's my preferred solution right now. I do the same for audio but you need space, a lot of space, to store it all. Storing them on HD has been the only real option for me to get any ease of use but I can understand not wanting to go there. I'm always cramped for space as my Son regularly wants to watch his old movies again.
As a result I'm not even close to having all my music files on hard disk.
I guess a big, really big, NAS is in my future.

In Netflix I found the option to sync the sound and video. At first I went back to IIR for that but that's hardly a solution once you've heard what the FIR processing can do. Clicking Alt+Shift plus left mouse button gives you access to AV Sync options. Figure the delay out once though sadly you have to adjust it every time you want to play something new.