Ok, you guys are probably going to think that im insane or perhaps some others here are just

I went to a second hand store and picked up a pair of "studio sound" EC-1000 speakers for £20 seemed a bargain, got home and found one of the drivers blown. There's a tweeter with a single capacitor, and two identical bass/mid drivers which have no crossover at all! insane! perhaps not ? 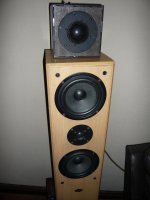 Im aware this is probably considered crazy in the audiophile world but i don't live in that world i live in my world BUT, i have a pair of bass/mid drivers from B&W DM10 speakers built in 1983, i kept those drivers since 1999!
anyway so i thought that having only paid £20 i would butcher those cabinets and put in my drivers, when i told someone in a Hi-Fi shop about this i was told how much of a bad idea it is and was very discouraged from experimentation, he seemed to know all the answers and that's all he cared about his ego and up his own **** attitude lol.

heres what i did anyways and wow its sounds great! i had to dampen the B&W drivers with about 5ohm resistor as they were overpowering. 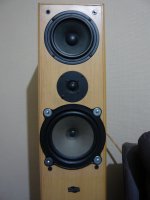 the reason i actualy got those speakers was for the cabinets realy as i don't have time or money to make cabinets, its all poor mans stuff here, anyway just purchased this nice B&O midrange driver with the right crossover might end up sounding good. I like experimenting
•••

It's all good. The risk is in the crossover not suiting the drivers and baffle. I'd rather use the B&W crossover except for the extra woofer. Need some thought there.

Is the cabinet actually better than the B&W?
•••
R

hey, thanks i forgot to mention, got rid of those B&W cabinets a long time ago one tweeter was broken the moment i got them. back then i moved house a lot and couldn't take the them with me so pulled the drivers out.

It would be easy to seek out a new pair of the DM10's but that would spoil the fun haha.
•••

During the 90's B&W made a few budget speakers that were not up to their usual standard. The DM100 and DM200 series were two of the offending items. It is quite possible that your cabinets are better than the originals.
•••
R

Sounds good, i Personally think the DM10's bass driver sound lovely they reproduce bass and mid bass Realy authentically! drums and percussion are great. and in the original cabinet treble was sweet. but mid-range was lacking big time.
Im going to be using dayton rs52 dome mid's when i get the chance to create a decent crossover....
•••
Show hidden low quality content
You must log in or register to reply here.
Share:
Facebook Twitter Reddit Pinterest Tumblr WhatsApp Email Share Link
Top Bottom