Joined 2010
I built the tone control below. Should the 2n3904 bring the output back up that the tone part attenuated? Or do I need more.


An externally hosted image should be here but it was not working when we last tested it.
•••

Joined 2003
It should pretty much recover the loss in the tone control circuit.
•••
G

Joined 2010
When I use portable cd player as input, the output is too low to hear through headphones.
•••

Joined 2003
The output impedance of the circuit is too high to drive headphones.
•••

Joined 2003
You could always add a common emitter output stage to drive your headphones.
It would be simple. Perhaps as simple as an NPN transistor with a resistor between the emitter and ground and an output capacitor to feed the headphones.
Of course, you'll need two of these circuits for stereo.

I just noticed that the schematic which you have provided does not include an output coupling capacitor. An output cap is absolutely necessary if you're driving headphones.
•••
G

Any and all suggestions would be appreciated.
Thank you 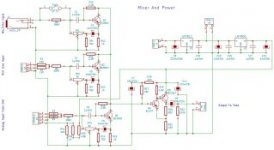 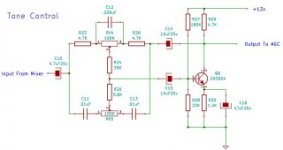 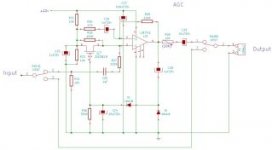 Joined 2010
Maybe these will be big enough to see.

Joined 2007
myweb.tiscali.co.uk/g8hqp/
Your input stages seem to attenuate the signal, then amplify it again. This will add noise.

What is the purpose of this circuit? Much of the mixing could be done with purely passive circuits, with less cost, noise and distortion.
•••
G

First, I'm mixing three audio sources together. One mic, a Labtec computer type mic. Two, dual RCA summed together. Three, the dual analog output from a small DAC, which are also summed together. After mixing, it goes to the tone control, then on to the AGC, which can be bypassed. The final output goes into a single channel induction loop driver that has a mic level input. The loop driver isn't shown because it is a complete functional unit. I'm just mixing the three sources into it.

Joined 2010
I actually use the same circuit. And I use two 2n3904 (NTE 123AP) in Darlington/emitter follower combination as a "light" headphone amp to hear phono preamps. It works.