Sorry to post with my woes, but I just thought someone might be able to point me in the right direction.

I have a 12ax7 based phono preamp that I am building point to point out of spare parts (basically, mostly) --thought it would be a fun project.
But I have been stumped by this one!

This is my first tube phono preamp. I have built some solid state preamps point to point with success. I also have a pair of PP EL34 amps I built and work great. Though, I admit my knowledge and experience are rudimentary at best.

When hooked up to a cheapy little headphone amp for testing I get some 120hz (I think) buzzing noise with some harmonics when the volume is kept low. This is quieter than the music on the test record.

If I turn up the volume to a moderate listening level, a 60hz (I think) tone dominates and completely swamps the signal. The hum seems to rise disproportionately to the amount the volume knob is turned.

If I hook the phono pre up to a preamp with a stepped volume pot I get a chirping noise every time I change the volume. This noise gets louder with every step. (I can only raise the volume 2 or 3 steps before the chirping is insanely loud!) The chirping also happens when the input selector is swithched to or from the tube phono pre.

Also, I notice that the DC offset, with the inputs shorted and the phono pre warmed up, starts off around -3V and settles to .004V in about 3 seconds. On power up the DC offset climbs to about 13V before settling to .004V.

It looks like V2 is drawing too much current. I am getting a reading of 170V at the plate, with the plate resistor drawing 1.2mA.
(This, of course, means that the grid of V3 (cathode follower) is seeing roughly the same voltage as the plate of V2, or ~ 170V.)

The cathode resistor at V2 is only drawing .27mA of current. Cathode reads .58 ohm.

The cathode of V3 reads 185V, and the cathode resistor looks like it is drawing 12.3mA.

I've gone over the circuit a dozen times and can see no mistakes in my wiring. Measuring with a DMM I get the correct values from point to point.

The power supply is CRCRC giving me 280v B+, (checked it in PSUD2 and I see no strange behavior here.)

The filaments are 11.9V DC filtered with a CRCRC filter (again, checked with PSUD2) elevated 30V. All my filament wiring was done as though it would be AC heaters. Tightly twisted pairs running along the corners of the enclosure and enter at right angles to the sockets. They pass all other components at right angles.

I'm sure I've done something stupid, but I just can't find it!

Post the schematic and a photo of the wiring.
•••
F 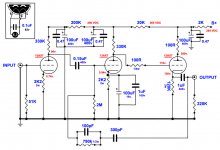 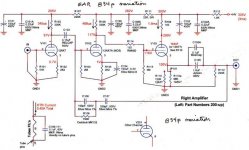 Hum is usually a sign of:
1/ Pick up in connecting wires/pcb.
2/ Transformer too close a valve/circuit.
3/ Input wires not screened.
4/ Poor decoupling.
5/ poor grounding technique.
6/ no earth wire connected to zero volts.
•••
R

It's normal for a tube stage to output a slow voltage pulse during warm up, due to the output coupling capacitor charging. Sometimes a muting relay is used to short the output to ground at turn on for several seconds to avoid this.
If the wiring conforms to the original schematic, there may be layout issues causing the hum. Is the turntable ground wire connected to the phono stage ground? Buzzing would happen if it is not.
Last edited: 2020-01-26 10:55 pm
•••
F

Thanks for your responses! Much appreciated!

Turntable ground wire is is connected to phono stage ground.

Power supply is in a separate chassis, connected with an umbilical. So not transformers are close to the circuit.

Grounding is accomplished via two ground buses (one for each channel) that connect to the point where the 3 decoupling capacitors for the B+ go to ground. This is also where the ground wire from the power supply attaches.

I have built this with both channels sharing the B+ rail. So the dropping resistors are 1k5, 10k, 100, rather than 2k, 20k, 200k in the schematics.
Hmmm... does having two ground buses make loop areas since the B+ is shared? Didn't think of that.

Nigel-- #6, are you referring to safety earth? Would this be better accomplished at the power supply chassis? Or somewhere with in the phono circuit, like at one of the input or output connectors?

#1, Pickup in connecting wires. Sorry, I'm not sure what you are referring to. My fault I'm sure.
•••

Safety earth should be connected at one point only to zero volts or you can get earth loops.

Pickup in connecting wires is the input signal.
You said it is screened so that should be fine.

So you have excessive hum, chirps and bias points that make no sense. When bias points make no sense at all, it is often a sign of parasitic oscillation. Does adding grid stoppers on the first two triodes do anything?
•••
F

So, I earthed the phono circuit ground, and the 120hz buzzing is diminished, but all the other problems remain.

The most curious problem to me is the “chirping” sound. Like a 1950s modular synth. First a short 60hz hum, then a short, crisp chirp. Both only last 1/2 second, but the chirp can be quite loud!

I can also make chirp by disconnecting or reconnecting the tonearm ground wire, in addition to changing the selector switch, or changing volume steps on a stepped attenuator.
•••
F

Thanks for your reply MarcelvdG.

First I am going to see what can be gained by removing the two ground buses and converting the circuit to a star ground configuration.

If this doesn’t fix things, I’ll try adding grid stoppers all around for sure.
•••

The cathode follower has it's cathode on 180Volt ? How is the filament supplies to this

tube ? If the filament is at ground potential you might have leakage between filament and
cathode, that can also explain some strange noises.
The tube is probably shot, but replace it with an ECC82/12au7 as this is MUCH more
suitable as cathode follower. Also make sure that a separate filament winding is used
to this tube and that the filament is elevated to between 100 and 150Volt. AC is ok here.
•••

What if you connect the feedback to the cathode of the first stage ?
Mona
•••
F

Thanks for your reply. The filaments are elevated 30v. That is what I have seen recommended by others who have successfully implemented this circuit. It would be easy enough to raise it to your suggestion by referencing the input tube’s B+.

Do you think it is really necessary to have a separate winding for the cathode follower? It would seem that many have made it work with all three tubes strung together.

Also, do you think this situation cooked that tube?!? Oops.
•••
F

Thanks for your reply.

Thanks for your reply. The filaments are elevated 30v. That is what I have seen recommended by others who have successfully implemented this circuit. It would be easy enough to raise it to your suggestion by referencing the input tube’s B+.

Do you think it is really necessary to have a separate winding for the cathode follower? It would seem that many have made it work with all three tubes strung together.

Also, do you think this situation cooked that tube?!? Oops.
Click to expand...

For reliable isolation the voltage between filament and cathode should be < 100 Volt. You have 150. Rising the single filement will start jeopardize

the other filamants as they should bot be positive relative the cathode.
( yes i know that some vendors stated limit to 180Volt, but that is to stretch it)


There is another problem with your design. At powerup the grids of the CF will reach B+
while the cathode is at ground, This violates grid<>cathode max voltage. A solution is
to have a diode ( 1n4148 will do) between grid and cathode, pointing down ( conducting
when grid is positive relative cathode)


As you have DC filament you could keep them at ground level and arrange
antother filement for the cathode follower . AC will do fine but elevate to 100 Volt.
A small transformer 12V 200mA will do ( or 6.3V 400mA)

Does sound possible you may have HF instability. Is the layout ok with output away from input. If you have access to a scope I would take a closer look.
•••
F

It must be layout related. Many others have gotten this circuit to work as is. Though, I do thoroughly appreciate everyone’s input about the design, and how to make it better!

My inputs and outputs are about 6” apart, but the build is very compact, and I’m sure this is the source of my troubles. Being only 3 tubes, I was temped to put it in a small space.
When I redo the grounding I will rework the layout, too.
•••
P

I agree with several earlier posts, that these symptoms suggest oscillation.

But there are a number of oddities in your measurements, which makes it difficult to use them for debugging without better understanding of how they were obtained.

The coupling cap goes to the grid of V2, not the plate. And it should isolate the DC voltages. And there is no source of negative voltages. So ... is the cap misconnected, or have you said plate and meant grid? Is the -23v at the plate or the grid?

"It looks like V2 is drawing too much current. I am getting a reading of 170V at the plate, with the plate resistor drawing 1.2mA. "

It's not at all uncommon to see what appear to be inconsistent voltages in the presence of severe oscillation, but you can see that the quoted measurements are not much help.

One possible diagnostic is to remove V2 and V3, leaving only V1. The voltages will be slightly higher on V1, but not much, and you can see if V1 is working correctly, with appropriate voltages and currents in the plate and cathode resistors. If V1 is working, then add V2. and check its voltages. If all is still good, then disconnect one end of the feedback network and plug in V3. Finally, reconnect the feedback. You will probably discover some unexpected problems in the course of that process!

What tube are you using for V3? The smaller diagram shows 12AT7 or 12AU7; the larger one shows 12AX7 - these are all very different tubes! If V3 is a 12AT7, then it has a fairly high transconductance and is thus more likely to oscillate. I see a 100 ohm grid stopper between V2 and V3; it should be as close to the v3 socket as possible, and if you are using the 3M resistor R115 in the smaller diagram it should connect at the V2 plate end of the stopper, not the V3 grid end as shown.
•••

Please post some pics of your layout and wiring this makes it far easier for us to diagnose any faults.