Ok...I'm old enough to remember techs using Rubylith film to layout circuit boards.
Anyone else?
Wikpedia Rubylith if you don't know what I'm talking about.
If you look at solid state gear from the 60s through the 70s you'll notice the PCB traces are of variable width, and most evident, are not necessarily orthogonal. Often the junction of three or more components will be implemented with a large fill area they all emanate from. Corners are round or any shape you can dream of.
Laying out with Rubylith required developing skills with a razor knife. It's nothing you could do successfully right out of the gate. You'd have to waist some material before you got good at it, and the material was not cheap. Sometimes a special table that guided a razor knife or parallel razor knives was used. I never did it personally but i witnessed guys doing it who are likely 70 years or older by now.
Anyway, I have a Peavey guitar amp, the Session 400, from 1975 that I still use frequently to this day because I've never found anything that beats it sonic-ally. The layout was obviously done with Rubylith. It's totally discrete, The pre-amp is single supply using many coupling caps between stages etc. I have simulated the circuit and have concluded there are some interesting design twists you don't find in other circuits, like a "loudness" affect and an interesting and effective parametric mid control. The power section is 200 watts! - done with all NPN.
I wonder now if the trace routing style makes any impact on the sonic qualities.
Anyone with an opinion on that?
Also, is there a modern software package that can do this style?
I imagine the graphic arts people have something but likely not optimized for layout. - probably lacks net/schematic coordination.
•••

I'm old enough to remember techs using Rubylith…..Anyone else?..... i witnessed guys doing it who are likely 70 years or older
Click to expand...

Hey, I'm only 67 and I watched and used "Ruby" for several years.

Rubylith was used at the Motorola plant where I worked well into the late 1970's for laying out hybrid microelectronics. The same technology was used to make the masks for early semiconductors and IC's.

It was replaced by Amberlith, somewhere along the way. Same stuff, different color. I believe the color change had to do with the photographic process that was used to reduce a 4 X 5 FOOT piece of "Ruby" to something smaller than an inch square.

Early on the design was done on paper in small sections that were taped together on a drawing board. A large sheet of Ruby was placed over it which was then hand cut with X-acto knives and straight edges.

By the late 70's the layout was done in CAD (a simple "polygon pusher") and the Ruby was cut on a plotter with a blade. It was a lot like what's in today's Cricut T-shirt stencil machine. It all got replaced by a giant photoplotter at some point.

I have never seen the Ruby technology used for PC boards, but simple PC boards were certainly possible this way. Early PC boards were usually done by the tape and Mylar method. In a manner similar to what's in a PCB CAD program today, there were slick on "library part" stencils for all the popular transistor and IC packages in sizes from 1 X (normal size) to 8 X ( 8 times normal size) or larger in commercial applications. I used 4 X for my boards.

The stencils were black on clear Mylar. There was black tape available in widths from 0.05 to several inches. A "tape up" was made of your PCB using these stencils and the tape, usually in a larger than normal size. It was then photographically reproduced in normal size to make the films needed to expose a photosensitive PCB.

Since a square or rectangle is the easiest object to make with tape, this is probably how your Peavey was done. If the traces have large sweeping curves, it's more likely that tape and Mylar was used, since Ruby didn't like being peeled with long thin curved traces, but a single piece of thin tape can be meandered all over the board.

There is no reason to believe that this or any other process would make any difference in the sound or function of the final product. We used tape and mylar to make two way radios that worked at 500+ MHz in the 70's.

The end result is up to the PCB designer, regardless of the techniques used. Granted PCB technology has evolved to keep up with the ever shrinking component sizes, as have the materials used.

As is the case today, some old 60's PCB's were well done, many were trash. The old brown Phenolic board commonly used in the 60's did have several problems, especially with moisture absorption and heat from vacuum tubes, but it is rarely used today, except when utter cheapness is involved.
•••
C

Great info Tubelab.
You are likely right about the Peavey. check out this image. I'm not user how they would make such perfect, almost bezerier, curves and teardrops, but I suppose it's acheivable with tape and mylar.
Here's an image of the layout

.
(Not sure if that image will work)
I still think that breaking the orthogonal rules could be an advantage - less inductance etc, and the unlimited selection of trace width although not that important for audio I suppose.
•••

The image did not show up, so I can't offer my opinion.

There was (is?) a company called Bishop Graphics that sold pages full of stick on shapes for PC board layout. I finally tossed my collection of unused graphics, my Mylar tape ups, and all my old photographic artwork during a clean up after my Florida lab got wet during a hurricane in 2006.

Some of my board from the 70's and early 80's were serious works of art, that's why I saved them for 20+ years. I had done several plug in cards for the SWTPC 6800 computer system (SS-50 bus) with 40 some chips on them, several RF boards, and some solid state HiFi and guitar amps.

There were stick on tear drops used for resistors and caps, and freehand curves were not hard with the tape. I believe that pages of curves were available, but being cheap, I stuck to only the stuff I needed, like IC and transistor patterns and several rolls of tape in different width.

Another common, but less reliable method was to use plastic stencil templates and a Sharpie to draw your PCB pattern either directly on the board for a one off, or onto paper for photographic reproduction. The drawback to this is that a mistake requires starting over, not simply peeling up the tape and moving it.

Stick the words "Bishop Graphics" into a Google Search, then select "images" to see some examples.
•••

My first PCB was tape on mylar: a bank-switched memory card (S-100 bus) for a 6809-based industrial balancing machine controller. Would have been about 1984?

campsquire said:
I wonder now if the trace routing style makes any impact on the sonic qualities.
Anyone with an opinion on that?
Also, is there a modern software package that can do this style?
Click to expand...

On my PCBCAD software it has a "round off corners" function.
•••
C

I'm getting back to this. I finally figured out how to upload a photo.
Would you conclude this was laid out with tape on mylar?

Definitely something done free hand and not by any eCAD
•••

campsquire said:
I'm getting back to this. I finally figured out how to upload a photo.
Would you conclude this was laid out with tape on mylar?
Click to expand...

Someone stuck a label over it.
•••

People are doing some really amazing stuff with PCB art these days. These are all from BoldPort: 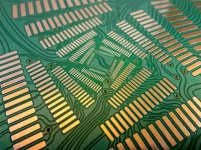 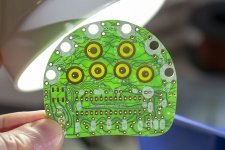 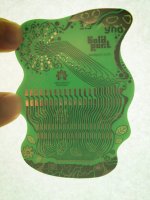 They use their own EDA called PCBmodE which is aimed at the unusual. Check it out: A circuit board design software with a twist | PCBmodE
•••

While the results are lovely, the workflow sounds seriously painful.
•••

There are "PC boards" that do not work with electricity. These are front panels for Eurorack music synthesizer modules.

I started doing tape ups many years ago, CAD was a life saver.
The corner structure for digital or analogue dosen't make much difference up to low GHz, when a signal goes through a via it is an orthogonal corner. Curved looks pretty but for most stuff not required and most microwave I have done has a 90 deg corner with a bit of the corner shaved off.
Those PCB's above look horrible as a PCB, yuk...
•••

i remember the old light box, clear film and tape in the 1980's.
we got back the pcb's anf they didnt work.
the boss had bought in cheap pcb's that were under etched !
shorts everywhere.
thank goodness for cheap chinese pcb's and pcbcad software.
•••
Show hidden low quality content
You must log in or register to reply here.
Share:
Facebook Twitter Reddit Pinterest Tumblr WhatsApp Email Share Link
Top Bottom