Puzzled about a response null on DIY speaker, looking for advice

I'm hoping someone can help me understand what's going on with a new DIY speaker build. I am measuring a deep null, about 15dB, in the woofer response at 70Hz, and I don't know what is causing it or how to fix it. The null in SPL is accompanied by a peak in group delay (or sometimes it measures as a valley in group delay, probably just because the phase is changing so fast that the calculation gets messed up). This is a Satori MW19P-4 woofer in an 18L bass reflex enclosure with a 3"D x 10"L vent. The cabinet is 3/4 and 1" MDF, heavily braced. I'm using a MiniDSP 2x4HD crossover and ICEPOWER 125ASX2SE amp. I'm measuring with REW software and a MiniDSP UMIK1 microphone. I've tried changing following things and the null is very nearly the same in every case:
Measuring in two different rooms, and also outdoors lifted 6ft from the ground;
With and without the MiniDSP crossover;
With a different D/A converter and a different power amp;
With the speaker's port open and blocked;
With very little stuffing up to maximal stuffing in the box;
With two different samples of the woofer and the cabinet;
I also tried re-measuring my main system's speakers, a different design, using REW and UMIK1 with the same settings, and there is nothing remotely resembling this 70Hz null.
Measuring in different locations of course changes the response significantly, but that stubborn null stays at 70Hz.
The only thing I haven't changed is design of the woofer and the volume and shape of the cabinet. I'm out of theories of a mechanism of this response null. Any ideas?
The first picture shows the response of only the woofer, in my office (not a listening room), with tweeter muted, at several different gain levels in steps of 6dB. The second picture shows a typical group delay graph. 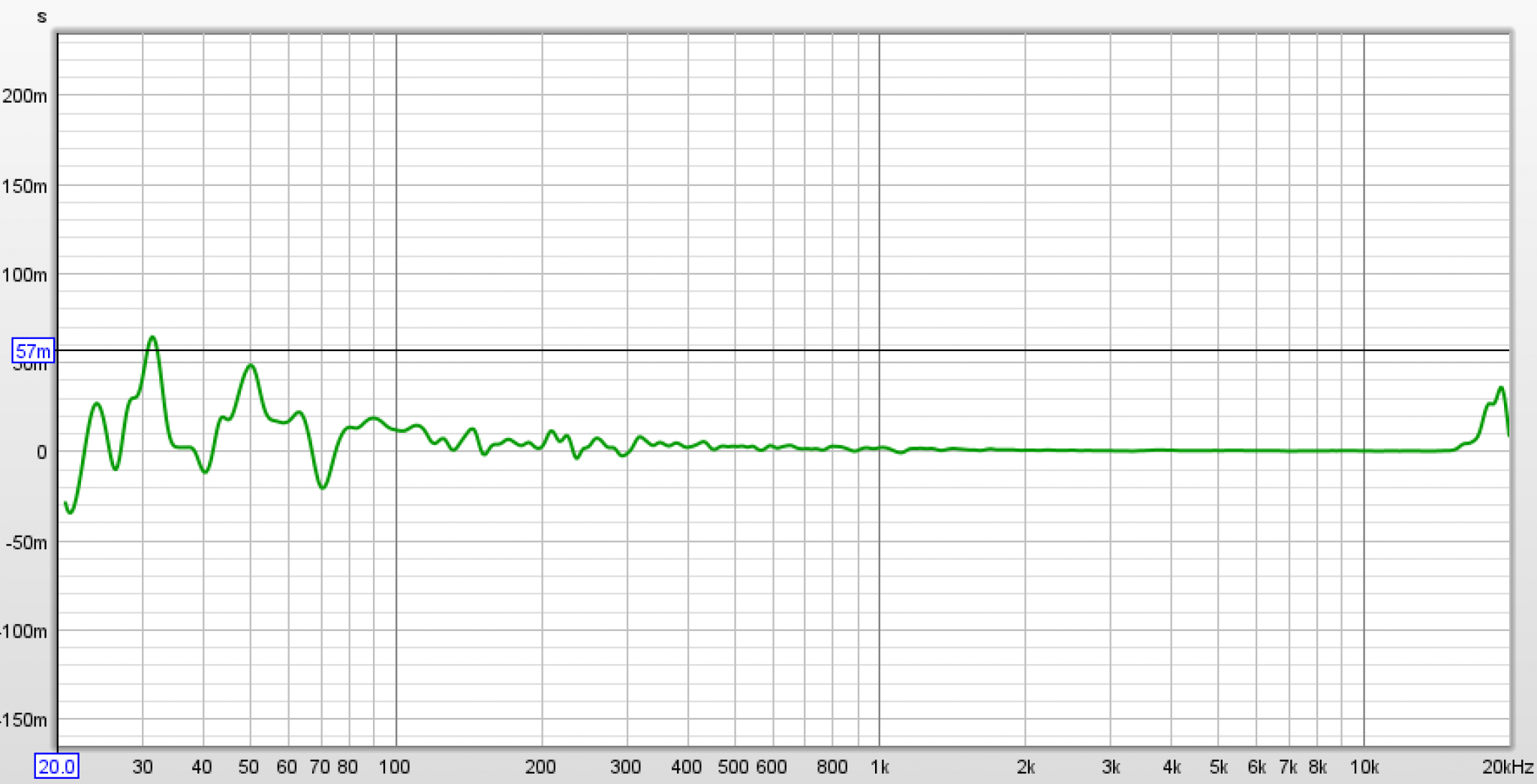 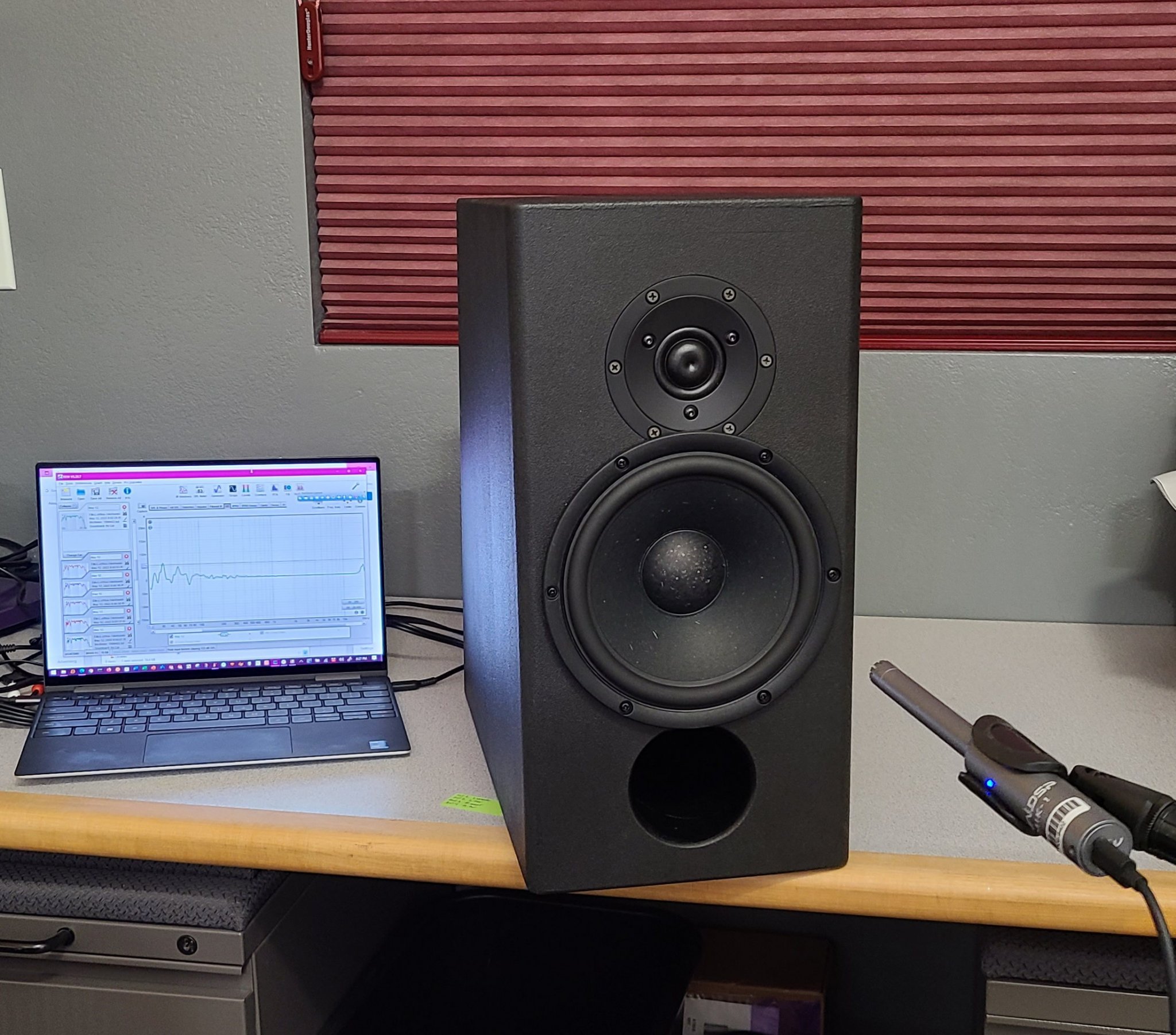 How far from the back wall is the speaker during measurements? Have you tried to measure really close to the woofer, say couple mm between woofer center and tip of the microphone?
•••

Did you save your outdoor measurements? My first thought was a room related thing, but you ruled that out yourself I guess.
The reflex output at about 50Hz (which should be about the tuning frequency) is there. So that would work I think. The dip is spot on the second impedance peak of your system (at least my sim shows that). It stays there when stuffing the vent or stuffing the enclosure (which makes sense). It's not an amplifier-driver related issue as you changed that. You could measure the voltage output of the amp (with a voltage divider you'd use for impedance measurements on a sound card input) just to be sure.

The vent and the location of it don't seem optimal to me though. It will produce quite a lot output at about 700Hz (1st order port resonance) and inside, the port entrance is too close to bottom and back to work properly. It might be some unlucky side effect of an ill-designed Helmholtz resonator.
•••
M

I'd suggest going back outdoors and doing a ground plane measurement.
Put the speaker right on a driveway or other hard surface. Do the same with the mic. Measure at 2 meters or greater.
If this shows the 70Hz null, then I'd say the null is indeed real.....but not until then.......
Good luck !
•••

I had a similar problem a couple of years ago. I discovered my laptop, which generated the test signal, was imposing a bass EQ which included a notch at 68 Hz. The thread below explains the problem I had, and what I did to fix it.