Hey.
I'm going to build tuner\CD player for usage with my LM3886 amp. I'm want to use car radio I allready own.
The thing I'm wondering is how big and what kind of power supply I need. I'm going to use only RCA-outputs for amplifier use. Voltage is 12V DC.

What kind of a power supply schematic would be enough good? What kind of transformer, maybe 50VA toroid 2x12V?

Someday I'll buy CD-player and Tuner, but now this would be a good solution.
•••

To power up the radio, you could use a computer power supply. These power supplies often have +12V output current ratings of more than 10A, ideal for just powering up the CD/radio. If you were to use the amplifier in the radio too, you would probably need a higher power PSU but since you are only using the CD/radio section a PC power supply is ideal.

If you were to use the computer PSU, you would need to wire the green (on sense) to one of the black (0V) wires. Some power supplies require a load on the output to power up properly but the radio should provide adequate draw.
•••

Get a 1 ohm resistor, preferably 1 Watt or greater (5 Watts).

Connect the radio to a car battery with the resistor in series i.e. battery +, resistor, radio +, radio-, battery-. Quickly measure the voltage across the resistor with the radio turned on and a CD playing (but without speakers attached, or with the volume turned down). Be careful as the resistor may get hot, but it probably won't. Try it with the tuner also, but the power should be less. Turn everything off and disconnect from the battery.

The voltage across the resistor will equal the current drain of the amplifier in amps. It will probably be less than 1V (=1amp.). Multiply the number by 12 to give you the power consumption in Watts. If you buy a transformer with twice the Watts (twice the VA) or more (buy 4 times) you will probably be OK. Don't use it to run speakers off the radio outputs.

A toroid with 1 12V secondary will be fine, build a PSU with bridge rectifier and say 10,000uF capacitor.

This not the intended use for the radio, so don't blame me if it fails at some point in the future, but this is unlikely IMO.

jackand08: Do you mean "old school" PSU from computer or is laptop PSU as good? What is CB radio PSU?

wakibaki: If I build PSU out of transformer, would minus (-) leg of the rectifier bridge left with no wiring? Capacitor comes between rect. bridge plus (+) and earth. Am I right?
•••

jackand08: Do you mean "old school" PSU from computer or is laptop PSU as good? What is CB radio PSU?
Click to expand...

By computer PSU I meant the type that fits in the back of desktop computers that transforms the mains input to the lower voltages required by the internal circuits in the PC. Sometimes you will see them called ATX power supplies instead. Even new ones with adequate power output can be had very cheaply from pretty much any computer store. A laptop PSU would not be suitable because these normally output voltages in the 15-21V range which is too high for the car radio. Also, the current they can supply is much lower than that of a computer PS. 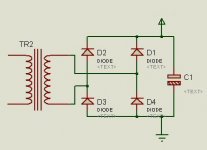 How about this one? Maybe 10000uf cap between earth and 12Volts.

I have never ordered from dealextreme and I'm thinking of giving it a try. Player has 10A fuse and I'm pretty sure this power supply would be enough.
•••

Yeah, why not? I bought stuff from dealextreme with no real problem. Sometimes the finish has been poor, but everything I bought worked. 5A should be plenty.