As I recall, you had a design out for an electrostatic type speaker with using ionized gas (from RF) as a membrane. There is also a rumour I have heard that you got sick from ozone poisoning as a result. I believe there were also companion amps (which are probably less interesting than the speakers and plasma generatiors themselves).

I am really interested in a short story on this project. I have tried Plasmatronic Hill Type 1's and am still kicking myself for not buying the pair. Plasma rules!

Do your bit for the ozone layer, get ionic (but remember to put on sun-lotion and eye protection to shield from excess ultraviolet rays).

I can go to any scrapyard and pick up a shitload of 12 month old GMS cell phones. What if I stacked them all close together and doctored them to keep hammering on the base stations?

It probably won't work, but they are strong enough to get my head hot and mess with airplane navigation.

Joined 2001
Paid Member
The "ion cloud loudspeaker" used photocopy
machine ionizing nichrome wire strung in a flat
array a bit like a window screen, but with more
space between the wires, and charged to a variable
DC potential of about 10 KV.

This screen developed a layer of ionized air, and was
enclosed between two stators, much like an electrostatic
speaker, except that instead of a charged plastic diaphragm,
you had a charged semi-flat layer of gas, and you could
push-pull it with high AC voltages on the stators.

It worked fairly well, and gave new meaning to the word
"transparency".

It also had several flaws, one of which did result in a
trip to the local emergency room with breathing problems
similar to those sometimes experienced by arc welders and
caused by extended exposure to ozone.

A trip to the hospital, huh? That's one way to know your having fun.

I've been wondering about the possibility of a laser-pumped corona discharge line source. (Laser doesn't make RFI.) Shine a laser down a knife edge, or maybe a fine-tooth saw edge. More "transducer area" than a point-source spike discharge. More bass? Yeah, I know, more ozone, too... Could gas-shield it, but I never liked the idea of big noble gas cylinders in my living room.

I also thought of loading a corona discharge with a downward-facing horn throat. Squirt a little helium up there, the corona heats it up, and its low density should keep it up in place. Helium flow could be very minimal.
•••

Petter said:
NP,
As I recall, you had a design out for an electrostatic type speaker with using ionized gas (from RF) as a membrane. There is also a rumour I have heard that you got sick from ozone poisoning as a result. I believe there were also companion amps (which are probably less interesting than the speakers and plasma generatiors themselves).
Click to expand...

Do a search for "plasma tweeters"... basically, you use a small tesla coil to create HV and ionize air near a wire to create a "flame"; the high voltage then gets modulated to an audio signal to create the sound. As i recall, this works only well for a tweeter and the sound is suposed to be quite good. As you said, ozone is a concern (it's poisonous in high concentrations) so you might want to play that on an open room I have some schematics laying arround if you can't find it on a search engine.
•••

I build a pair of plasma tweeters, and there is no smell even after hours, likely because it is hot inside the housing.

Ozon falls to pieces fast, when it is hot.

This is not my explanation, just read it somewhere else. 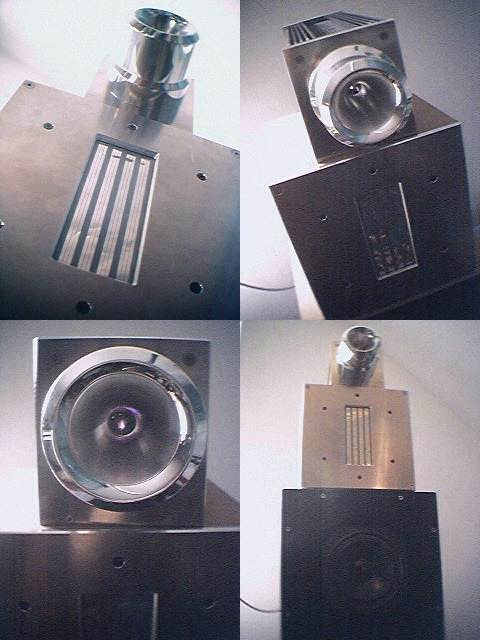 Joined 2001
Wow, those units are pretty.

Are they a kit? What's the manufacturer?

Joined 2002
There is no kit, no manufacturer.

The horn is taken from the Visaton TL16H horn tweeters.

I have curves somewhere, but I am not shure if they are correct, my notebooks soundcard isn´t so good.
•••

Joined 2001
Your chassis and horns look so nice, I thought it must at least be a kit.

I've been through the DIY plasma tweeter sites, but none of the pics looked as clean as yours.

Is there any danger of arcing to your metal horn throats?

What's your approximate efficiency with the horns? From what I've read, the other DIY plasma tweeters are plagued with inefficiency.

Sounded good above 1 kHz. Absolutely rotten below. We used to refer to them as a "supertweeter on top of a garbge can". I don't know what happened to the pair the store I was at had. I think UNT bought them.

The big hoot was when Dr. Hill and the guy from Princeton that designed the Synclavier put on a demo in Dallas.

Ah yes the Hill plasmatronics..... a hissing helium plasma tweeter with a very audible crossover from a 5 inch driver with volcanic rocks in the enclosure..... if I could make up stuff this weird I would write sci-fi like Grey.

Who is that man and what is that he is standing by?

I would be more concerned about what you get if you don't. This is a no brainer!

Joined 2003
i know what he is standing next to:

a large rectangular-prism-like thingy
i have a brain
•••


HarryHaller said:
Who is that man and what is that he is standing by?
Click to expand...

Secret fact of the day: Those were not my shoes.
•••

Joined 2002
Before you criticize someone, walk a mile in his shoes. Then
when you do criticize that person, you'll be a mile away and
have his shoes.
•••
Show hidden low quality content