After searching these boards for a while I decided an LM3886 chip amp was the one for me, and being in China, I searched for a PCB kit on taobao using that chip, along with a transformer, preamp parts and case to go with it.

The PCB kit arrived today and i realized that the LM3886 chip is mentioned in the title of the product page, but in fact its an UPC1342V chip. The mention of the LM3886 in the title was referring to this one being better...or something along those lines.

After taking a look around, I see very little mention of this chip, so I am a little annoyed (at myself more than anything) as I was keen to get building my LM3886 baby.

So, has anyone got experience using this UPC chip next to the LM or knows how they compare? Sending this kit back is possible, but the weight, and more importantly the time I have to wait are an issue!
•••

As you probably purchased it through fleabay and paid by PayPal, open a dispute stating it is not what you ordered. The responsibility is on the seller to collect the wrong item, not for you to pay postage.
If you used your credit card to pay for it, tell the card company and they will reverse the payment.

JonSnell Electronic said:
As you probably purchased it through fleabay and paid by PayPal, open a dispute stating it is not what you ordered. The responsibility is on the seller to collect the wrong item, not for you to pay postage.
If you used your credit card to pay for it, tell the card company and they will reverse the payment.


The upc requires additional output transistors to achieve any sort of power.
Click to expand...

thanks for your input, yeah, well I can return it, I am not sure if I'll incur any fees due to the weight etc, but thats not a big deal.

I'm just curious if it's worth the hassle of returning it, for all I know this chip may be as good as, or even better as the seller claimed.

that chip probably needs external output tramsistors, so if you got them also it could be fine, not sure how good would it be driving speaker directly or that it is even possible.
•••

You will need an external output pair to drive your speakers as the UPC is only a driver IC, not an output IC.
See attachment
I assume you are EU based, if you are you are not liable for any charges; see the distance selling rules.

I got it through Taobao, which is the Chinese version of ebay / amazon and in all fairness, It's my own fault, I didnt bother to translate the Chinese title of the product page, I presumed the mention of the LM3996 chip in the product meant it had that chip at its heart, but in fact it was some deceptive wording. I may have not fallen for that if I could read the characters a little better, but my Chinese reading is comparable to that of a 3yr old.

Just to clarify, I have a full kit, so I don't have any issues putting it together, in fact I'll add the diagram if anyone comes here in future looking for info.

My main problem is, I've ordered a bunch of other components from other sellers, namely the PSU, and a case that may or may not fit a new board if I were to go ahead and return this one, and buy a new LM3886 kit.

It all boils down to how much difference its going to make in the real world.

JonSnell Electronic said:
It will probably be fine.
Click to expand...

Actually it may be better! Looks like more output current and possibly better open loop bandwidth and gain.
•••
U

haha, well thats just the kind of thing i want to hear! I've decided to build this system and see how it goes, the total outlay is under 100GBP so it's not a big risk, and it'll be fun to build, plus I'll have an excuse to build another if I don't like it.
•••
C

please keep up us informed about your UPC1342V amp
chris
•••
N

please keep up us informed about your UPC1342V amp
chris
Click to expand...

I had a month holiday in Japan courtesy of covid19, so things got a little delayed.

Ended up causing smoke and flames twice now, both my own stupid fault (see my other threads!) so I am back to try and get some advice before I order (yet another) kit.

maybe someone here can throw me a few tips...

Now when i power it up, good news is there's no flames. bad news is, it's dead as a doornob. I haven't plugged a speaker into it, but I can tell its not doing anything as the chips stay cold, where as the other channel is toasty after 5 minutes.

So, short of ordering kit number 5(!), what could I do to find the source of the problem?

The other kit I used as a resistor donor was killed when I shorted the volume pot PCB onto the big capacitor on the amps PCB, I dunno if that means the mosfets are ok but the amp itself gives off a terrible buzzing when powered up to speakers, So, maybe switching the mosfets over is an option?
•••
N

Upon more uneducated testing, I found that the mosfets show continuity, with the 5200's showing 2 of the 3 legs connected, whilst the 1943's a different 2 legs being connected.

Not really sure what I can do now, other than buy another kit...
•••
F

Upon more uneducated testing, I found that the mosfets show continuity, with the 5200's showing 2 of the 3 legs connected, whilst the 1943's a different 2 legs being connected.

Not really sure what I can do now, other than buy another kit...
Click to expand...

I assume that it is the schematic from posting #6 you use?

First, a bit of work without the power connected.

You measure from each of the emitters of the four power transistors and to the output line with an Ohm-meter. You need close to 0.22 Ohm in all four cases. Most DMM cannot measure 0,22 Ohm precisely so first you short-circuit the measuring pins and read the value (we call it SC). Then, you remember that the reading when measuring from each emitter should be that value (SC) plus 0.22 Ohm.

Next, for all four power transistors you measure the impedance (with an Ohm-meter) base-emitter, emitter-collector and collector-base. Any reading below 1 KOhm may indicate a problem.

Do you have an oscilloscope?
•••
N

no scope, this is my first dabble back into electronics in about a decade, so equipment is limited at the mo.

Ill grab the meter and attempt your instructions
•••
N 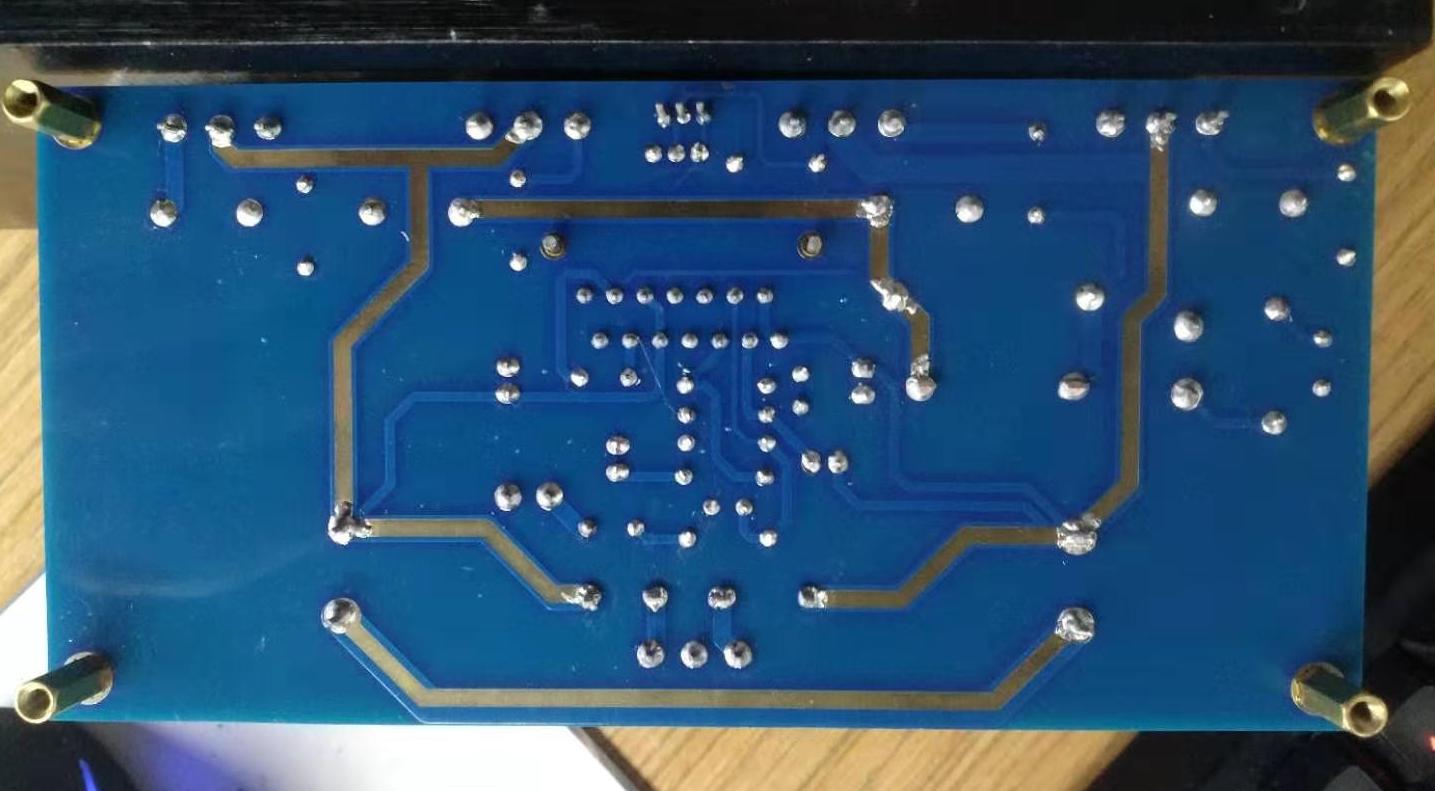 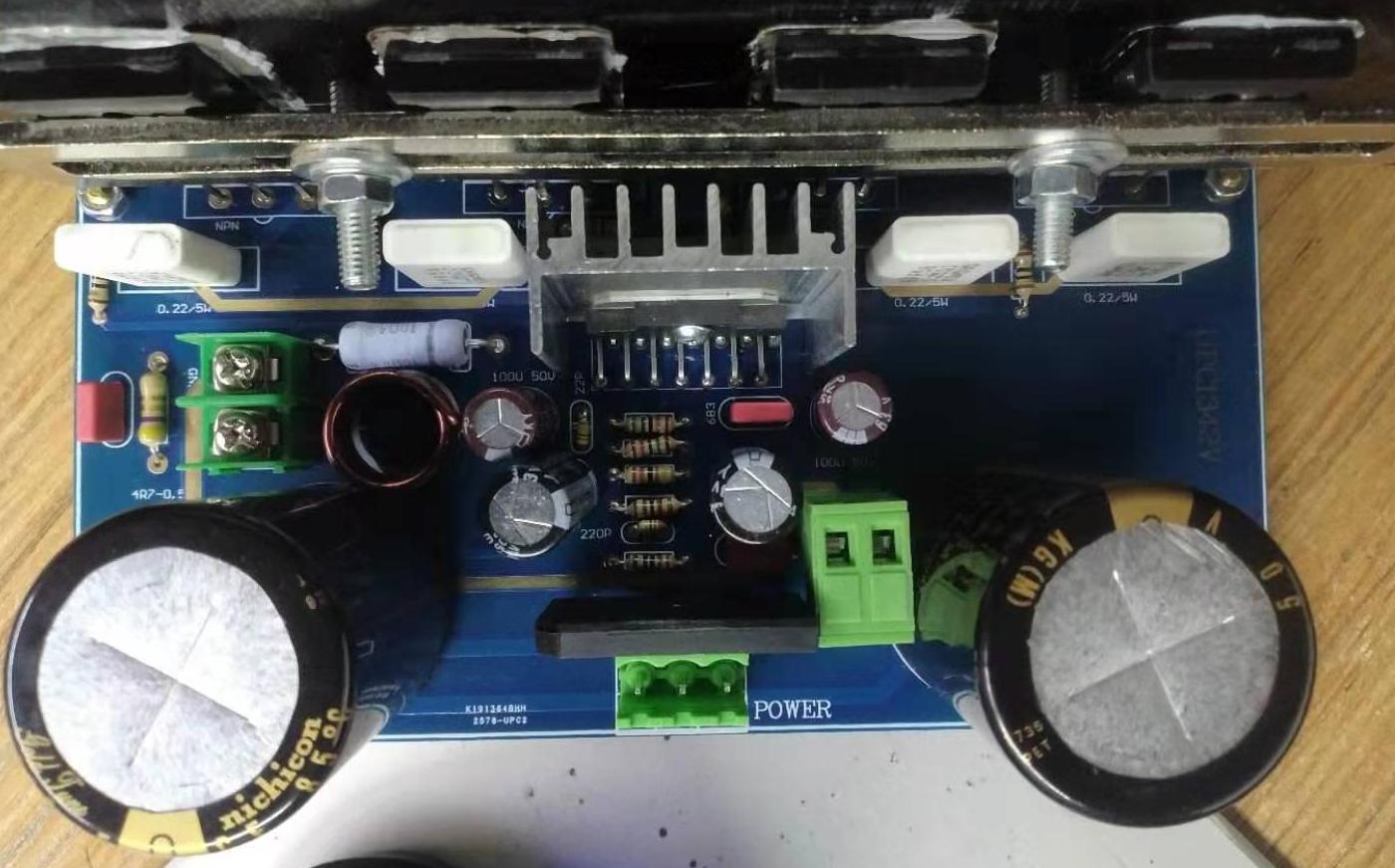 It's the schematic from post 6 yeah, well that's what i got from the sale page.


Here's the PCB as I look at it, I just tried to do the first test you mentioned and realised the black multimeter probe is broken now! Its barely 3 months old too. I shacked together a substitute but I don't really trust to beyond continuity testing.

probably gonna put the idea on hold for now, surprisingly the wife was asking when the amp was coming back, which makes a change from her complaining there's wires all over the house.
•••
N

since I had to wait for the delivery of the multimeter probes, I also ordered a new amp kit, the 5th, and thankfully, final one. Amp is finished and sat in the livingroom with all its screws firmly in place. Will add some photos to the amp gallery later.

BIG thanks to everyone who helped on my hazardous journey
•••
J

Do I understand this correctly that 4 previous amp kits failed?
•••

Should be easy to tell, see attached.

jameshillj said:
Do I understand this correctly that 4 previous amp kits failed?
Click to expand...

no, i killed three, first one i didn't have the heatsink on correctly, second one shorted with the power regulator on the preamp, third one, I put the 5200 and 1943 chips in the wrong places....