Hello everyone!
I just bought an O2+ODAC combo and I noticed some weird white noise coming from the right channel when connected via usb (no noise bypassing the ODAC). I opened it up and noticed the grounding wire isn't there. Could this be causing the noise? The wires connecting the ODAC to the O2 seem fine.
•••
A

"grounding wire"?
do you mean safety earthing wire?
or
audio ground referencing wire?
or
screen/shield connection to enclosure?
•••
B

I'm a total noob when it comes to diy, I just opened it up to see if I can notice any difference compared to other O2+ODAC build tutorials. I am referring to this little guy: 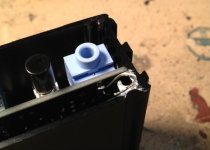 There should be exactly one connection of audio ground to case. (The effectiveness of shielding at RF would be improved by multiple connecting points, but one would use capacitors of about 10 nF for the others.) Maybe it's already provided elsewhere (like at the USB jack)? Otherwise you'd have to add it.

The problem only being in one channel would point towards some sort of electrical field coupling / layout issue though. Maybe the connecting cable uses separate wires that are not closely spaced, or the ODAC board is unfortunately placed near some high-impedance node.

Does said noise depend on volume setting (and if so, how - test the entire range)?
•••
D

It's coming from the odac because the O2 is dead silent when disconnected.
Also, I briefly plugged my headphone directly into the odac with nothing playing and the static was there in the right channel.

When I googled this, there are actually quite a few reports about the right channel having static but there was never an answer.