Joined 2014
We are announcing a release of our audio system to those interested in the idea
Its based on the Beaglebone Black using a Maxim codec. It can be controlled by Windows, Mac and android at the moment. It allows the playback of music files from its built in hard drive, from internet radio stations, and can do mixing and recording. It also has wireless Wifi audio speakers and can even playback from Itunes via Itunes airwave. A lot of it works well but Its still in Alpha development stage and we are very keen on getting folks impressions, and suggestions.
Currently we describe some of the hardware details but will be providing a better description on how to build it, and will provide compiled software for you to play with if you so desire. We are looking for coding gurus also. 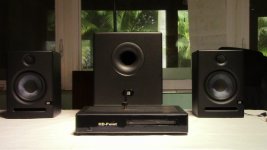 The Maxim 98089 Codec used in our system is an economical development board that produces good audio with up to 102 db dynamic range and multiple parametric equalizers and dual microphone inputs. In addition to line level inputs this gives our system a lot of flexibility. We use I2S for our music inputs and outputs to our server hardware.
Because the codec was so flexible it took a lot of work to implement a client application that could leverage it. We are still contemplacting Implementing that parametric features of the EQ's...

We think there is no remote control software outside of professional audio that can do so much. But we are packing it with a lot music source ability... besides its supposed to be a home stereo first and foremost.

With the Maxim Codecs ability to output to Line Out, Reciever Out and a built in class H headphone amplifier we have a lot of choices for speaker and amplifier combinations.
For our wireless system we chose OEM style Pro Audio speakers. We use Texas Instruments wifi reference design modules to handle the wireless option. These little boards have the ability to communicate up 5 mbps. And in 48khz 16 bit or 24 bit interleaved audio. They are also capable of auto switching to the wifi channels that have the least traffic. And can go into even higher channels such as channel 12-18 which are very little used.
Our satellite speakers have 5 1/4 coated kevlar woofers with 1 1/8 dome tweeters while being bi-amped for a total of 100 watts.
Our sub has a 8" woofer with a total of 200 watts.
We use the subwoofer as our center point to receive the wifi audio signal from the server and then distribute the analog portion on to the satellites. We think this method is more economical and less cumbersome than all speakers having Wifi recievers plus the sub has a high pass filter cutting out the low audio portion from the satellites.
If thats not enough you can use both wireless and wired speakers from the same system.

On our custom tuned linux based system, We use a central server we custom designed with the advanced language called Golang. This development platform developed by Google themselves is almost as fast as the C++ language but its strong suit is network communications. It can handle multiple accesses and tasks especially well.

We then picked a tried and true programming library from None other than VLC of video player fame. Why not MPD, Squeeze Box, and others? We besides VLC being strong in Video management and playback, audio capabilities of course have to be right beside the video playing. But our VLC package is customized for audio, and one of their very strong capabilities is media file conversion, stream handling from internet radio and one of the best cd / dvd playback handlers in the linux community. VLC also handles pausing and skipping track position very well. In fact we experienced the ability to rewind an internet stream to a point. Which seemed odd why they would bother, but its there.


But we also have the ability to use independent processes or applications made by third partys without the complexity of mpd which requires library's for these applications to be built or compiled in in most cases. Which when someone updates their software and one wants to use it in mpd a rebuild or recompile of mpd and everything must be done at the same time. Taking a very long time.
We did away with that nonsense, we treat and handle outside processes like one that accesses Spotify as an outside program that we forcefully manage and monitor. When its time for an update it just requires one to compile or rebuild that one application. Not a slew of things. Plus if that application were to act funny and or stall we can sense it and shut it down. All the while keeping everything else running from the main service.

Communications with the client application on your phone, pc or mac is done through http, the same access protocol as the internet. But with a structured way of talking using the REST protocol which is a set of rules to keep every thing honest and if theres a miscommunication its easily detected.

Our communications with the codec to change things like volume is almost a direct channel, theres little if any conversion to tell the codec to turn up the volume or adjust the equalizer. This is all done for speed.

We took a hard look at things especially stability and efficiency and our server in tests has been up 20 days until a power surge rebooted it.
Its not perfect, but we want to make it as close to that as possible in the future.