I am looking for the best portable p.a. system for vocal music, for groups of 1-200. I'm a church consultant who teaches/sings mostly with smaller churches. Compose my own accompaniment on my MacBook Pro, with Sibelius software. Sibelius isn't the greatest for performance, but with a good EQ and average folks, it works. Want as wireless as possible. Been using a JVC Kaboom 40W boombox. Good, but not loud enough. Especially want quality bass. Looking at Mackie Freeplay, but reviews are so-so. Tried a Bose system with tower, but lacked bass. Had back surgery, so I can't lift my big p.a. I'd pay $1k + for the right system.

However bettering a a 40W boom box is not difficult.

A single Yamaha DXR 15 will totally exceed your expectations.
•••
E

Tom. go to a well stocked music store and talk to them, see what they sell and consider their suggestions. If you have a professional sound company/consultant in your area, consider them as well.

Most PA OEMs make some sort of portable system. The funny looking Fender Passport sounds better than it looks, Peavey makes one, etc.

If it is just one mic and one line source, you could even get away with a powered speaker or two. The JBL EON series started this idea, but every speaker maker now makes powered speakers in molded cases, put them on poles. They usually have a mic input and a line input right on the rear panel. It doesn't sound to me like you need a lot of mixer. But even so, a tiny mixer like a Xenyx502 or one almost identical from any other mixer maker would mix your mic and line source and could then feed whatever power amp and speaker system you chose.

SOunds to me like self-containedness is important to you. One thing that closes up on itself for easy transport, rather than ten different things to lug in and out. So something like a Passport snaps the speakers to the mix module and has a "glovebox" inside for mic cords and microphone. It also has a wireless input option.

A powered speaker with simple mix inputs stands along, carry a shoulder bag with your cords and mic, or if you add a tiny mixer, toss that into the bag as well. Of course stands are separate for any of them.

And if you have no professional sellers in your area, go to a web site like Sweetwater Sound, they have a large selection plus some very basic tutorials and some very knowledgable folks on the phones. They have a good selection and you might learn about what all is out there in the market from one web site.
•••
T

Thanks. Seems like most single speakers lack some bass. Even the Bose towers. I think they're passive woofers, but not sure. txt
•••
T

As a tech sort of guy, serviceability is very important to me. Line 6 is one of those companies that WILL NOT provide service documentation like schematics to anyone other than authorized service centers. If this is not important to you, then at least find out where the nearest authorized Line 6 repair shop is.

Companies like Peavey and Fender and Mackie have service centers all over, PLUS they will send you the schematics etc upon request.
•••
T

he seeks the holy grail !
the one unique product that does everything he wants and weighs nothing to boot. maybe he will have to DIY after all.
conanski and enzo's recomendations are spot on.
if you've had back surgery see if the parishes where your preforming can supply a young strong back to assist you with gear handling.
•••

Did you try the Bose system with an extra sub? - IIRC it'll drive 2 subs in total, one of them being built-in.
You want small, light, with plenty of bass. How loud do you want to go?

Get two Behringer B215D and call it a day. Heck one would probably blow you away if you've been using a boombox as PA, 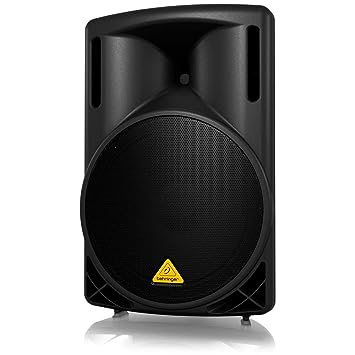