I've got a prototype working of a 3-way open baffle speaker. This grew out of a 2-way open baffle prototype that I previously developed. The system uses a medium width flat baffle, so I call it the MWOB-3. The baffle is 24" wide and 30" high.

Here's a picture of the prototype (you may need to click the image to view it with proper proportioning): I did some modeling of the Exodus Anarchy before choosing this mounting location. At the time, my goal was to smooth out some of the dipole response peaks, which I thought would be necessary for the original 2-way version. It works as advertised and keeps the drivers in a tight group so I didn't change it for the 3-way incarnation. Here is a measurement of the Anarchy alone on the baffle:

As you can see, the first peak in the dipole pattern occurs starting at about 800 Hz or so. I chose the crossover point to the midrange as 750 Hz. I would go lower, but this would significantly increase the power requirement for the midrange.

The tweeter has good sensitivity (rated at 87dB/W) and despite being a 1.5" diameter radiator has good upper end performance. Here is a plot of the driver's response in free air: SYSTEM RESPONSES IN THE VERTICAL PLANE: I've been auditioning the speaker over the last couple of days. The tonal balance seems fine - I don't find it to be bright despite the mostly flat on-axis response. The system response extends down to about 80-100Hz, where the woofer starts to roll off more steeply. I would probably cross over to sealed subs at 80 Hz so that I could still get some good SPL out of the woofer before it reaches Xmax.

Please note that no expense was spared on the cabinet esthetics. It is a prototype after all...

Now that I have TWO working speakers to listen to I am really liking how this project is turning out! The imaging is good and I can get reasonable SPLs using about 50W for the midrange and tweeter and 100W for the woofer.

Next up is making a new mount for the tweeter and midrange. I'm trying to figure out how to hold these drivers in place without blacking the rear radiation - maybe holding them by the magnets. Ideas on this are welcome.

Here is a picture of the prototypes, finally a stereo pair: CharlieLaub said:
Next up is making a new mount for the tweeter and midrange. I'm trying to figure out how to hold these drivers in place without blacking the rear radiation - maybe holding them by the magnets. Ideas on this are welcome.
Click to expand...

This works for me: 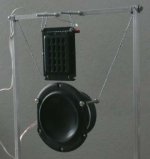 Just fix the frame at the back of the baffle.

I'm really interested in using the TB's in a open baffle type design with a boxed woofer
How's this project coming on?
•••

Next up is making a new mount for the tweeter and midrange. I'm trying to figure out how to hold these drivers in place without blacking the rear radiation - maybe holding them by the magnets. Ideas on this are welcome.
Click to expand...

By hanging them with rubber bands.
Do you need a picture ?
Just make two 'columns' at each side , or make a frame and from the top angles you can attach the midrange driver. A third rubber band is then fixed by and around the magnet to make the driver horizontal ( so you need an extra prolongation at the top of the frame, just in the middle ). Same for the tweeter but ...below !
It should be done also with the woofer but that would imply a redesign.
With the drivers suspended there are just no interactions between the drivers.
Just make sure the rubber bands are tensioned to the point that the load can oscillate at subsonic frequency

Well, I suggest Charlie to try.
I specified the number : Three ,one holding the speaker by the magnet to counterbalance the weight; the other two could be substituted by one passing thru the two ( upper ) holes.
The rubber has to be at nearly max extension- depending of its elasticity, which mainly depends on the size .
It's simplicity at its best
And I will go on and on repeating the same story
•••

picowallspeaker said:
Ps. Rudolf, that is so ...naif !
Click to expand...

Sorry I don't quite understand
Is it me, you or the correspondent suspension method "that is so ...naif"?
•••