Joined 2009
blurbillon.com
For a while now I've been thinking of building a relatively comprehensive remote controlled line level selector box with an integrated DAC. The other day I was browsing fleabay for cheap prototyping parts and I made a simple flowchart of what I'm looking for: 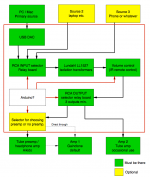 At least for the initial prototype I was thinking of using these dirt cheap relay boards for the inputs and outputs: 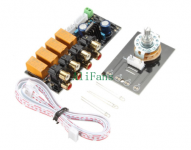 picture stolen from eBay because I hate expired forum links.

I have already built the same basic concept as a manual switch box like this: 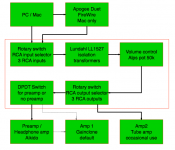 Can you spot any major flaws with the idea? Any similar projects here on the forum or elsewhere? This will definitely be done on a budget at first so I'm not interested in elaborately priced commercial products which I know are already out there. There will also be a speaker switch in the same box, but I didn't put that in the flow charts. My manual switch box already has that.
•••
Show hidden low quality content