Got one of these amps for free, faulty. Both prot leds lit up when switched on. No shorted outputs, so propalby something wrong in protection circuit.. who knows. Supply rails, low and high, were ok (50 and 100Volts).
However, after a put the amp back together.. there was something wrong and two outputs blow up.


This amp is almost 100% identical to Zeck PT series so I downloaded service manual for Zeck. Output circuitry is 2-step class G (or H).

However, one thing is different: Zeck is using mosfets for rail switching but this amplifier has no fets, but single pair of 2SC5200/SA1943 for each channel (beetween output stage and high voltage rail). Same transistors as all the actual output bjt's, four pairs / channel.
Driver transistors are also the same so there are 6 pairs of 5200/1943 / channel.
I have never seen single bipolar transistor to be used for rail switching in such a heavy duty amp, does it really have enough headroom for such? 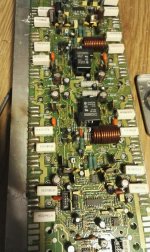 Yes, I measured 0.7mV beetween the ground and emitter resistors midpoint / output before spk relay so DC problem it is not.


I also measured +/-15Volts (resistor + zener regulation) in the middle of PCB. I got +15.01 and -14.85Volts, so the negative side seems a bit low which may cause some issues. Bad zener possibly. I'lll swap them and also some 15V supply electrolytics.
Failure has to be in common circuitry because both channels were in protect mode without any output problems.