I have a Philips CD960 (basically the same as Marantz CD94mkI) which plays discs/albums with an average runtime perfectly fine but won't play the last few tracks on albums with an unusually long runtime.

So, to give a typical example if I play the compilation album Beatles 'The Singles' which has 27 tracks and a runtime of 76 minutes it will start skipping and stop playing at around track 22.

This particular player came to me as an abandoned repair from a used HiFi dealer and someone had obviously been messing about with it before I got it so all bets are off when it comes to adjustments!

So far I have:

I have also tried to adjust the focus which I understand is done by raising or lowering the platter height and adjusting for as close as possible to 0v at the brown/white wire on the 6 black 6 pin connector coming off the motor PCB. I have found that adjusting this precisely is very tricky because the reading fluctuates up and down constantly and the optimum adjustment seems to be different for different discs.

I have also tried adjusting the swingarm alignment because I got myself convinced that this was the problem. I did this by slackening the two screws which hold the baseplate of the lower swingarm bearing and adjusting it by hand whilst observing the RF eyepattern. I have simply set it to give the best looking trace at both the start and end of a disc.

This is the RF eyepattern (probe connected to TP65 C501) when playing a good factory CD. The scope is set at 0.5v/division so the pk-pk amplitude is about 1v. 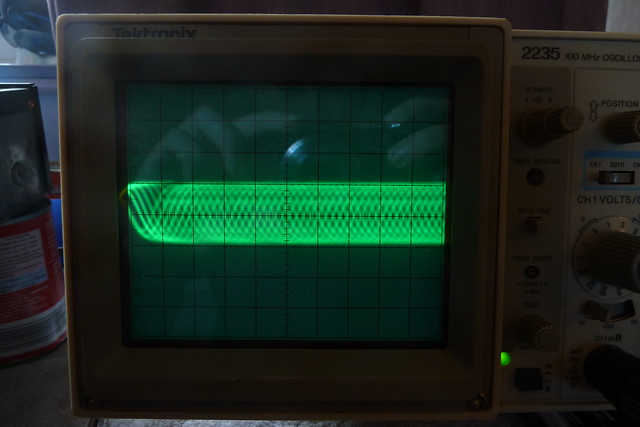 And this is the same but with a CDR which gives about 0.8v. 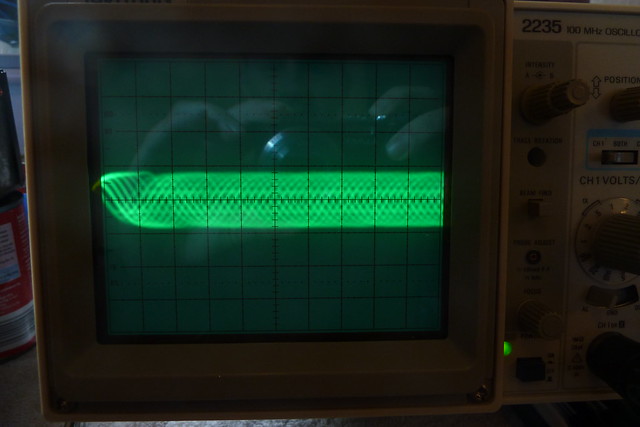 The photos make it look better than with the naked eye and in reality the trace is a bit blurry/fuzzy for my liking.

I haven't yet recapped the servo control PCBs.

I'm really not sure what to try next and any advice is most welcome.
•••

The swingarm moves freely from end to end. I can't detect any binding.
•••

The swingarm definitely isn't hitting up against the end-stop.

Is there an adjustment by which I can increase the swingarms power to overcome the resistance/spring effect of the ribbon cables?
•••
M

I've just finished recapping the servo control PCB's and although I found dry solder joints at Q231 the recap hasn't made any difference.

I've observed that it seems to take the swingarm a long time to move into position if a track near the end of a disc is selected. Much longer than I would expect. I wonder if that is significant?
•••
A

Did you check the 'Radial Motor' drive circuit on the servo board ? That output is controlling the radial arm swing motor. If either the driver is not delivering enough current or the radial motor on the CDM1 is faulty, the swing arm may not have enough power to set position against e.g. the spring force from the flex connection cable. This could explain why the arm is moving too slow and is not able to reach the outermost position.
•••
M

aboos said:
Did you check the 'Radial Motor' drive circuit on the servo board ? That output is controlling the radial arm swing motor. If either the driver is not delivering enough current or the radial motor on the CDM1 is faulty, the swing arm may not have enough power to set position against e.g. the spring force from the flex connection cable. This could explain why the arm is moving too slow and is not able to reach the outermost position.
Click to expand...

That's a logical suggestion, thank you.

I've been able to get some improvement by moving the 47K trimmer which controls focus offset. First I marked the position of the trimmer carefully and then tried moving it in each direction to see if I could get an improvement. Moving the trimmer clockwise around 1/16 of a turn has certainly helped but it's still not perfect.

I think I need to figure out how to make a proper adjustment of the focus offset.
•••

I have the very same CD player. The service manual does not tell anything about Focus Offset adjustment, neither does the C.D.M.-1 service manual.
I think your approach is correct, by adjusting the bottom screws until you get 0V at the focus amplifier output. If the voltage is roughly different at the end of the disc, the swingarm is not horizontal with the disc surface.
The end of the disc is around the perimeter, where the laser mechanism is most sensitive to any mechanical offset. This mechanism was designed for red book 74 minutes factory pressed CDs. If they squeezed more time into your disc, it is likely that it does not follow the red book specifications, e.g. the space between the spiral is narrower.
•••
M

Well I seem to have fixed it

I decided to strip down the turntable motor and take out both of the small boards that are located underneath the laser.

Here's what I found:

The turntable motor lower thrust pad shows very minimal wear with just the slightest indentation worn into it by the spindle. 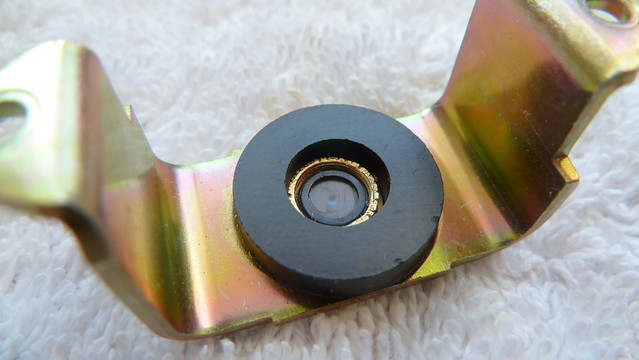 I decided not to grind it flat and instead just gave it a good clean and then packed it with a small blob of low viscosity synthetic plastic safe grease. 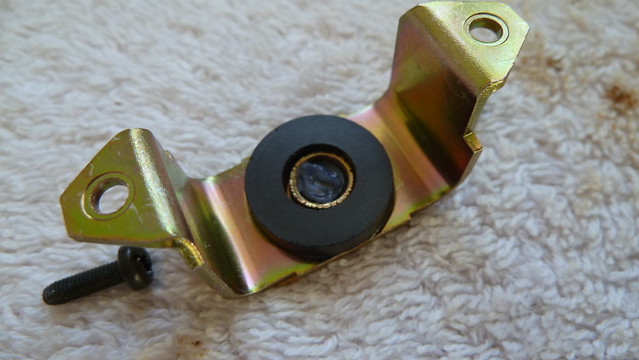 I completely removed the motor platter and spindle from the mech and cleaned in solvent before reinstalling and lubricating with a few drops of light oil. 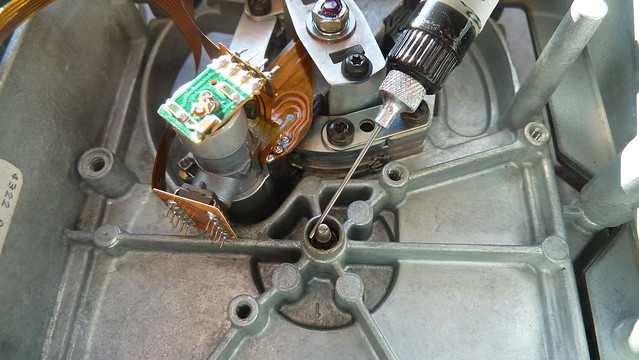 When I examined this board carefully I found that the solder joints under this transistor were dry. 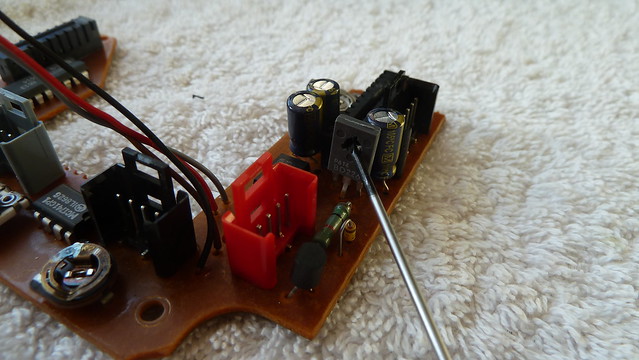 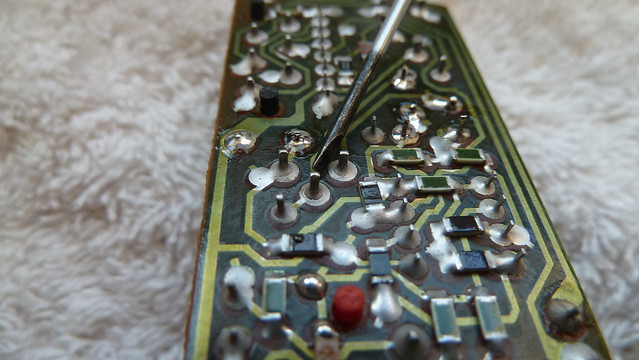 
So, I resoldered them and any other joint that looked even slightly suspect.

On this board I wasn't happy with the ground contact where this screw passes through, so I scraped off the soldermask around the screwhole and tinned the whole circumference of the screwhole. 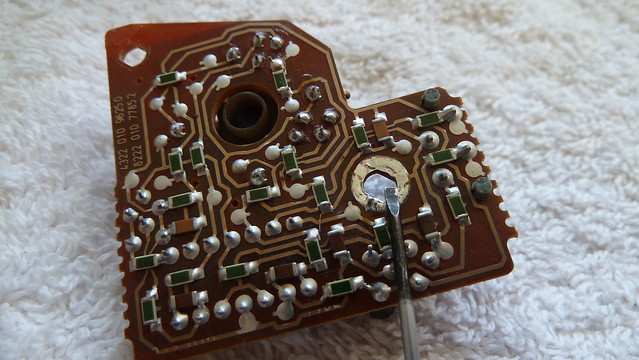 I put it all back together, checked the focus adjustment/spindle height again and hey presto it now seems to be behaving flawlessly!

So I'm not sure what the exact problem was but I'm happy with the outcome.

The other good news is that I now know it is possible to set the correct alignment of the swingarm by observing the RF eyepattern and the voltage at the focus amplifier output. You just need to adjust for optimum RF waveform at both the beginning and end of the disc and also minimum difference in the voltage between the beginning and end of the disc. It might not be perfect but it was good enough for me.
Last edited: 2019-10-17 2:49 pm
•••
M

The problem could be due to something mechanical causing vibration as the swing arm gets to the outer edge of the CD where the rotational speed and centrifugal force would be greater. You could try to deal with the latter.

The keeper circular bit in the clamp that rotates and puts that puts some pressure on the ball bearing could have worn some of the plastic away in the recess where it lives or it might need some grease too.

If that doesn't work you could try putting a thin slab of blu-tak along the top of the tab over the ball bearing. I have an old Conrad-Johnson Sonographe CD player where this is one of the modifications applied to the base Phillips CD350 which they used.
Last edited: 2019-10-20 11:04 pm
•••
C