Joined 2010
i just finished building tda7386 based power amplifier.i was unable to find a pcb so circuit assembled on a copper track board. schematic is shown here ->http://lh4.ggpht.com/_6QEbeUPgtas/TCHhThjUIOI/AAAAAAAABS8/1DcFiKrOAzo/ampli 22w -.png

amp is working but sound not clear especially voices (cracking voice)and a big humm (hum reduces when i touch heat sink but it never goes away)and also there is a clapping like noise in back groun(clap..... clap...... clap......)and very low bass(compared to my 2xtda2005 amp)...

some photos of the amplifier is shown below.. 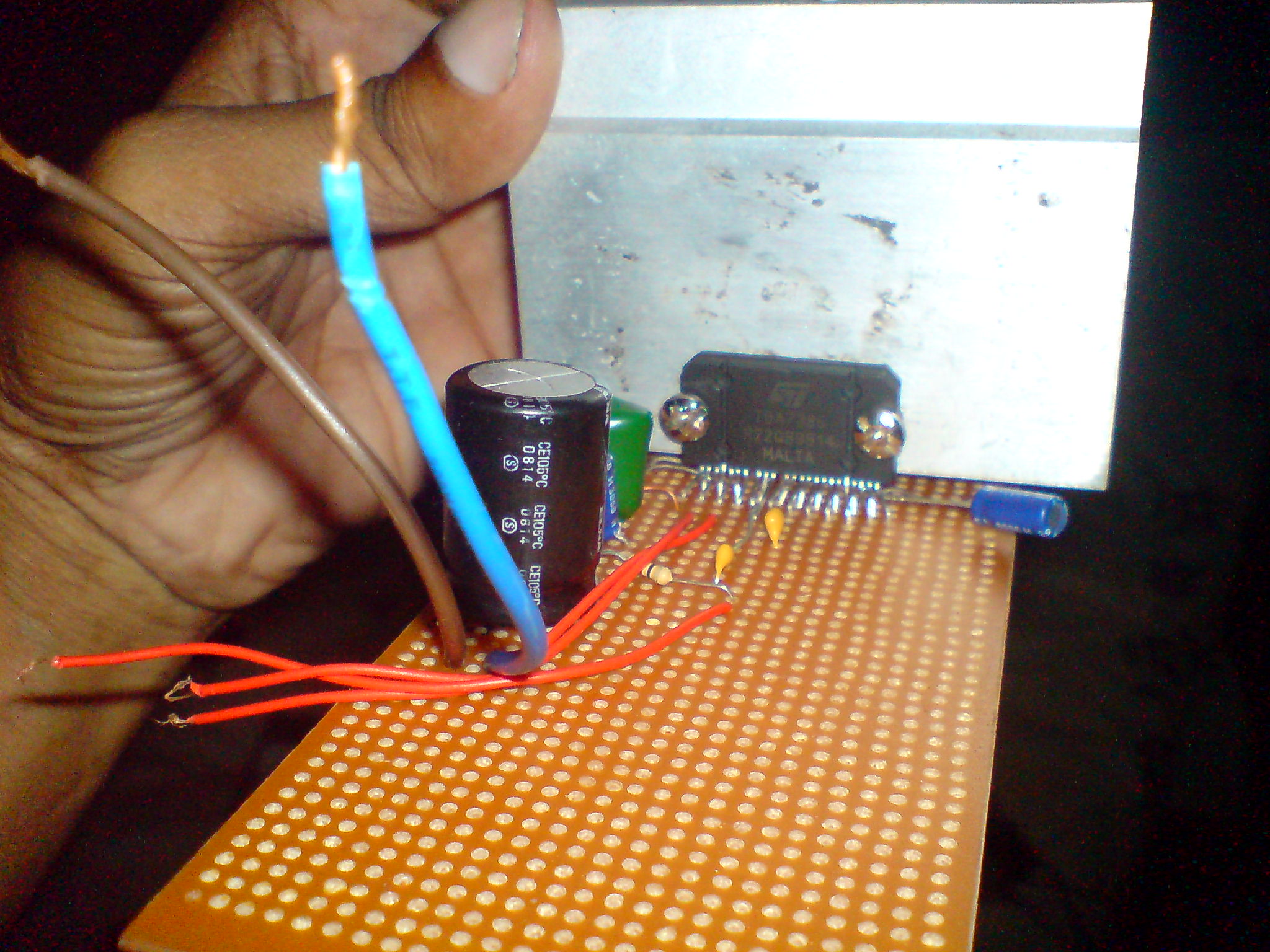 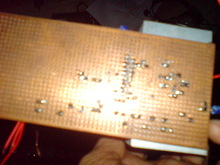 Joined 2009
The clicking noise comes from the computer power supply. It's due to the Switch Mode Power Supply thing, as it switches on and of very rapidly at high currents.
The hum is probably a grounding loop or the heatsink not being grounded. Did you cut of the tracks, so no long strips of copper are attached to the components?

Joined 2010
thank you guys for your quick reply.. i have no idea how to ground the heat sink can you pls tell me how?i think that clapping sound comes from the pc speaker set. i connected the input straight to the pc sound card then it(clapping sound) went away.also i connected 10k resister between sgnd and in then voice was 5% clear..

for joris i ddnt cut any tracks.long strips of copper is still attached to the components..but my problem is unclear voice is it bcoz of these long copper strips ????

thank you again for your help..

PS in another thread some of the diy audio member has replied to the bass problem saying to increase the input capacitor value, i connected another 204pf cap serial with 104pf then bass problems seems ok...
•••
B

I haven't done audio "tinkering" for years so am rusty. I have an Amateur Extra ticket and a home recording studio but am not all that good with electronics.

My mystery concerns two Kenwood auto radios I've worked on recently...a KDC-215S and a KDC-316S; both use the TDA 7386 IC amplifier chip. Before installing these radios in my old truck, I carefully confirmed ground, "hot" 12VDC, switched 12VDC, and I bench tested the radios with a regulated supply. I even measured the resistance across all the speaker wires in the truck, checking them for a short to chassis ground or the presence of 12 volts on the leads. When the radio was installed and I reconnected the truck battery, there was a momentary large current draw and, in one case, the 10 amp fuse on the Kenwood blew. However, in both cases, the front end of the radio survived fine...it will tune and play CDs throught the RCA photo outputs. But there is no signal on any of the four speaker output leads. I've read the spec sheet on the TDA 7386 and can't imagine what could have caused those ICs to fail.

So, I have two questions for anyone who would be so kind...First, where is the best place to buy small numbers of TDA 7386 amplifiers? Second, does anyone have an hypothesis regarding what happened based on knowledge of that IC? All worked on the bench with small speakers but failed the first time the radios were powered-up in the truck. There must be something I'm overlooking in that installation.

Joined 2011
pc psu is a very intresting animal.
If possible, obtain a nother powersource for testing.
Best vould be 3x 4.5 battery packs, in series connection, or You can just hook it up to Your car's battery.
Post if You still experience the same problems, at least the psu can be ruled out.
•••
M

i ve same problem with tda7386, i used 12v transformer and 4700uf 50v capacitor my amp work but lots of hum sound clear all channel with hum i also connect eart ground, but hum not go awy. some body help me sorry for my bad English, i exactly follow datasheet
•••

Joined 2008
murtonpikesystems.co.uk
Its probably an earth loop.
You need a star ground at the power supply.
•••
M

Joined 2012
thanks for reply i tried every thing star grounding hum dont go away i am hopeless now i think tda7384 is faulty because i rewiring every thing nothing help. i tried my friend stereo chip tda2050 is play no hum if any one help me who try this ic with success
•••
J

mofakkher said:
thanks for reply i tried every thing star grounding hum dont go away i am hopeless now i think tda7384 is faulty because i rewiring every thing nothing help. i tried my friend stereo chip tda2050 is play no hum if any one help me who try this ic with success
Click to expand...

i was able to correct this.. ground your heatsink. and build this on proper pcb..
•••

But be very careful. In many ICs (dual voltages) the heat-sink tab is connected to -tive supply. DO check in for this IC.
•••
P

Try to isolated pin 13 (Signal Ground) and pin 1(Pwr Ground). pin 13 goes directly to RCA ground connector and that must be insulated from chasing body....