Joined 2001
Just thought I'd share my recent addition of a symmetric PS B1 buffer to my Hafler SE100 preamplifier. I had this idea while working on a Hafler Iris preamplifier when I realized that Hafler used this same JFET buffer design for their "record out" buffer in both the Iris and 915 preamps.

I wanted to see how much improvement could be found on the existing SE100 line stage so I started by upgrading there first. The SE100 was Hafler's low cost preamp and the successor to the DH100. As such a lot of short cuts were taken in the parts used in the SE100. Luckily it still used the same high quality discrete Jfet circuitry of the later 915 preamplifier, so all that was needed was to upgrade some parts. A BIG improvement to the original circuit was had by upgrading the preregulator PS capacitors from 2200 uF to 4700 uF and the amplifier block storage capacitors from 220 uF to 470 Uf. I also added the post regulator rail electrolytics (as seen in the 915 pre). There were provisions for these electrolytics on the board, but they did not install them. I then replaced the polycarbonate output coupling caps and line stage caps with good polypro film caps.

The stock line stage sound improved dramatically after the improved film capacitors and upgrades to the electrolytics. In fact the stock unit had a glare to the sound quality that rendered it almost unlistenable to me, especially at elevated sound levels. This glare was all but gone after the changes I just mentioned. But even after this dramatic improvement in sound I still wondered how much better it could sound with the B1 circuit.

In order to implement the Sym B1 circuit I wanted a better PS than the standard SE100's 7815/7915 regulators. I really wanted to use a shunt regulated PS but the stock 6 VA transformer would not have the capability to power that regulator and there is no room for a massive 50 VA transformer in this chassis. For my new PS I still wanted a little more power than the stock 6VA xformer could provide so I found a nice, cheap 10 VA transformer at digikey that only required a little massaging of the pins to get it to fit in the original xformer socket. For the improved regulators I decided to use a Zener + Emitter follower PS. I trimmed the DC rail output voltage with low value Dale RN series resistors in series with the zeners. In the end I was able to get the rails to match to within 10 mV of each other. I built the new regulator on a 50 X 70mm FR4 pcb with P2P wiring.

The buffer circuit was also built by P2P wiring it on its own 50 X 70mm pcb. I also installed a pair of 470 uF Panasonic FC storage caps on the DC rails on this board. The completed B1 buffer circuit was then wired in after the volume potentiometer by removing the 100 ohm resistor that went to the input of the original SK163 in the stock linestage. I also ran a wire directly from the output of the new B1 buffer to the "rec out" RCA's. This wire is run underneath the SE100 main board so you cannot see it in the pictures. So my new buffer feeds the both the original linestage and the REC OUT RCA's in parallel. So I can still use the original line stage if needed, but I also have a direct B1 buffered output on the REC OUT jacks.

The new buffer circuit fired up and tested good, with 1 mV and 2 mV of DC offset on the REC OUT RCA's. But what about the sound? I have it hooked up via the REC OUT's to my Hafler XL600 and the sound is simply amazing. It is so transparent and open compared to the original SE100 line stage and my other pre's that I cannot see ever switching back to the gain stage. It also has plenty of drive for the XL600. The 12 o'clock position on the volume pot is as high as I could ever conceivably use. BTW, I am using a California Audio Labs CL-25 DVD as my source which has a ~ 2V output.

If anyone is interested in possibly integrating one of these into their Hafler pre's let me know and I'll post a modded original SE100 schematic that shows how this was implemented.

One of the pictures shows the stock SE100 before I began modding it. 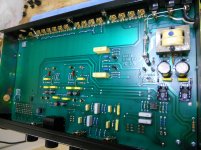 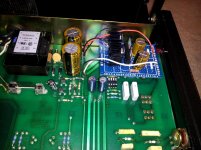 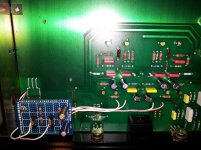 Joined 2012
Looks like a very good mod. BTW- I talked to David Hafler once at the Hafler factory.... he didnt believe that caps make a difference in the sound. But he also didnt listen... he was a wealthy man and this was a side line investment... an employee told me he owned Tv and radio stations.

Joined 2001
It interesting that the later and higher end 915 pre which used much the same JFET circuit as the SE100 had mostly polypropylene film caps in the locations where all of the polycarbonate caps were located in the SE100. Of course Mr. Hafler was long gone from the company by the time these preamps were being designed and sold. Mr. Strickland was responsible for the Iris and I would assume the SE100/915 as the topologies were very similar once you removed the optical volume controller from the Iris. But obviously someone thought that the Polypro's were better than the Polycarb's as they would not have installed those more expensive caps without a reason. I had read that David Hafler had a very different view about the high-end and that all differences heard, should also be able to be measured.
•••
C

Joined 2001
Here is the modified Hafler SE100 schematic (one channel shown) that shows the changes I made circled in red. Two of the original resistors are removed from each channel to allow for the circuit connections. 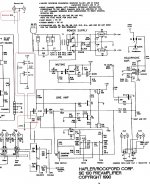 Joined 2005
Because of his experience in modding Hafler products, John Hillig of Musical Concepts was called in to participate in the design of the 915 preamp, hence the use of his Musical Concept caps in the 915. The few tweaks and use of poly caps throughout is his doing. He does make a number of high-end mods for the 9i5 and other Hafler preamps, his most notable is an outboard PS as well as a redesign of the feedback in the preamp, in a brief email conversation i had with him.
•••
T

ticknpop said:
Change the 4 diodes in the rectifier circuit to 1n4936 or Uf4007 or Small hexfet diodes
Click to expand...

Thanks,
I forgot to mention in my main post that I installed upgraded UG2D U-fast soft recovery diodes.
•••
1

I had my 2 SE 100 preamplifiers modified by musical designs. It was well worth it. I would have to spend a lot of money to get something that would sound as good as these units do now. My favorite feature about this preamp is the dual amplifier outputs. I am using an EMOTIVA A-300 amplifier on one output and a Parasound HCA1200ii on the other. Although I spent 3 times as much on the Parasound....The EMOTIVA A-300 at $399.00 sounds just as good as the HCA1200ii without the huge electrical draw and heat. For anyone looking for an inexpensive amplifier that will amaze... the EMOTIVA A-300 is it!!!
•••
D

Joined 2001
I've had a SE-100 since I bought the store demo unit back in the early 90's. I later installed a Jung Superregulator, Schottky power supply rectifiers with snubbers, some better quality Panasonic power supply capacitors and Black Gates in the tone controls. I never got around to replacing many of the audio path resistors with Zfoil resistors.

Age is catching up with me. And the preamp itself. Some of the pushbutton switches are becoming intermittent; dirty switch contacts are distorting contacts, for which I'm not certain how to replace. Or even clean. And the volume control's become explosively noisy when first rotated a few times. I think it's an Alps; can genuine replacements still be had? A real switched attenuator solution doesn't look easy to implement.