Joined 2002
Hi.
I've got an old pair of speakers lying around (from an old "hi-fi" system), and I want to do a little work on them.
Currently, the crossover only consists of a 4uf cap between the woofer and the tweeter. I want to upgrade this cap to something of higher quality, but I'm also wondering if I should throw in an inducter, to make an equivalent low-pass filter for the woofer?

Joined 2002
Good idea, depeding on impedance of the speakers it should be really easy to figure out the required inductance of the low-pass section.

Get an inductor with a little too high value and wiend of wire a little at a time while listening to the speakers and when it sounds right, solder it in.

Another good idea I have found is to change those capacitors. Actually I change mine every 2 or 3 years, although they should not be any difference in them from when they were put in, I have found that there can be a dramatic improvement in high freq. response even if the replacements are identical to the original.
•••

lordvader said:
I've got an old pair of speakers lying around (from an old "hi-fi" system), and I want to do a little work on them.
Currently, the crossover only consists of a 4uf cap between the woofer and the tweeter.
Click to expand...

What kind of speaker? Alnico? Are the drivers mounted from behind the baffle (with a removable back)?

Many of these are essentially full range systems with a little help at the top. Very often the builders were pessemistic wrt the extension of the midbass.

I'd start by disconnecting the tweeter completely and have a listen to them. Then start adding in the T, but with a smaller cap (ie 2 uF -- ~10k) and increase the cap size until the T starts to intrude -- then back it off a bit.

If that doesn't work out you might also consider a series XO.

If the drivers are mounted from behind the baffle a big improvement can be had by remounting the drivers from the front (or at least champhering the driver cut-out). This will get rid of the tin-can resonance from the cylinder (driver cut-out) the driver is firing into). Unfortuneatly the grill-cloth is often a casualty (maybe not such a bad thing. The ridges on the front edges of the cabinet should be delt with as well. Radical surgery with a router is one way. If you want to try to maintain the box's cosmetics a wool-felt (not polyester-felt) star (scroll down) on the baffle is helpful.

The boxes could also use some bracing. Simplest are strips of hardwood (say 19mm x 35-50mm wide) on edge in a partial diagonal on at least the longest walls dividing them into long, skinny trapezoids. (Note: sometimes it is best just to toss the old boxes because they are beyond redemption -- a good example is the Zenith Allegro 2000 which has a really quite nice Foster (Fostex parent) 8" FR and a Foster horn. The boxes really suck. 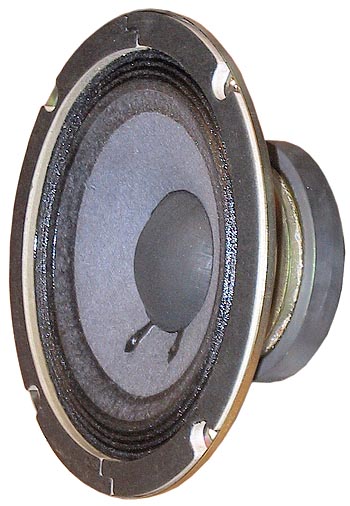 And ductseal or similar on the baskets.

It is often quite surprising how much better these speakers can often be made.