Final doubt on CarlosFM like PSUs ("light" or "complex v3")?

Hello,
after too many readings about Chipamp PSU implementation examples I'v come to one fundamental question that still seems unclear to me, that probably is very subjective but that still would like to hear opinions of listeners that compared them.
There are different CarlosFM PSU like implementations like for example a "light" version like the interpretation of BrianGT

and the v3 von Carlos itself 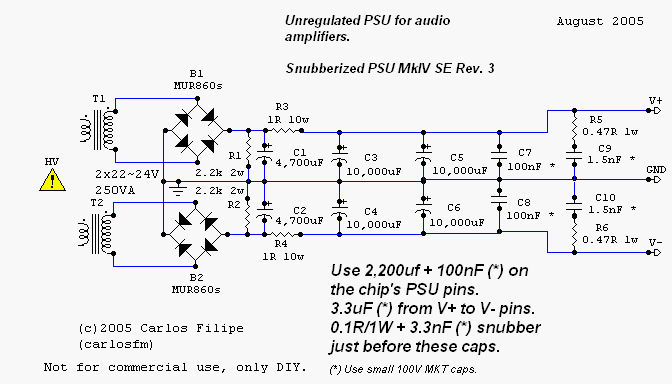 rather complex and that even uses a resistor on the line (R4 [email protected]), probably like an inductance more than else...
And the question is indeed if some of you tested some of those and could explain sonic differences he felt.

So we have a power supply with a static series reistance of 2 ohms within the rails. This will do wonders for your output power figure into 4 ohms speakers (NOT). At least 1 of these will be dissipating 1/4 of your available output power per cycle, as well as slowing down the charging of your reservoir capacitors ultimately leading to more power loss through droopy rails. Can someone please show me the advantage I'm so obviously missing?
•••
T

I mean I also have always seen lots of discussions about this two opposite philosophies: a) trying to reduce resistance and inductance as much as possible, as well as b) introducing resistances and inductances claiming it will perfectly fit that specific chip/amp/application.. and I also always have found those discussions weird from logical PoV.. so I was now trying to go the pragmatic route and try to evaluate only with experience by listening or by collecting other users' listening/testing opinions.. so like if all is more subjective or application dependant than "logic" dependant.. anyway who know what is wrong?

1R does seem a little excessive, I'm not really sure what the normal current draw of a chip amp is I know my LM3886 only uses around 11W at idle... Lets say it is 3A when running fairly hard. if so then you will be dropping 3V across that resistor. so if you had a 30V supply it would drop to 27V when pushed (just from the resistor without taking into consideration any other contributors to voltage sag).

The reason for putting the resistor in is to reduce the ripple on the supply, but typical power amp PSU's I have seen have 1/2 ohm or less for the R. preamp PSU's are a different story.

At the time of the release of this PSU there was a lot of controversy, and I think that was in large part of the reason for CarlosFM departing here. The controversy was more around the snubber part of the circuit and the claims being made as to it's effect on the sound.

As is often the case here, people wanted theory and proof to back up the claims and the whole thing spiraled out of control.

I hope that this time around that this is not the result. (and if it is the thread will not last long).

Hi Tony,
absolutely: what my intention is, would be to keep it on the experience side more than on the "theory" or "proof" side.
First of all to my ears and my tests, I definitely and of course subjectively, perceive it as an improvement to have bigger capacitance, but snubberized, in the PSU (esp. if compared to smaller capacitance.. that has also negative effect on noise/ripple for me). Additionally the snubber is of mandatory importance to be (also?) present at the very close end where the amp PSU imputs are (V+ and V-).
But not wanting to discuss that.
Wanted to discuss if further improvements suggested that time by Carlos with those resistances in series and those further added caps would mage a difference in your HEARING tests..
For instance it could benefit the noise floor but be a hindrance in rapid music passages? <- real question then...

I think the first schematic (without the 0.1uF/ 1R "snubber") is perfectly adequate and has everything going for it. Double up the the reservoir uF for 4 ohms ann leave it at that. And if you must put snubber in, put it across the AC input of the bridge rectifier where it *might* help with switching ringing of the diodes (although to date, with such heavy electrolytic filtering already going on, I've never seen the necessity...).

There's no way a puny 100nF , even less a microscopic 1.5nF , and with a series resistor to boot, can have *any* measurable or audible effect on an amp which at the same time is being fed from multiple 10000uF caps.
Seems like worrying about what a mosquito would do to an Airplane Carrier or Freight Train by moving its wings one way or another.
Gimme' a break !!!
•••
T

JMFahey, so you think no help even in preventing ripple noise and similar?
And what your opinion about R3/4 resistors for instance?
Even if in the end I agree with blu_glo: I'd try to setup some PSU made with "crocodiles" and test it out myself..

tent said:
JMFahey, so you think no help even in preventing ripple noise and similar?
And what your opinion about R3/4 resistors for instance?
Even if in the end I agree with blu_glo: I'd try to setup some PSU made with "crocodiles" and test it out myself..

Give it a go, but we all seem to be agreed - we don't expect you to hear any real difference at all....

but what makes me also think is that I see very same reasonings and implementations (a la CarlosFM) also in other, let's say professional, or not DIY, style PSUs, like for instance this one from TexasInstruments: http://www.ti.com/lit/an/snaa057a/snaa057a.pdf

PS: I speak of unregulated PSU of course..

Yes, I see it.
In fact, they state

CS7, CS8 act in conjunction with RS1 and RS2 to decouple the large electrolytic capacitors and reduce impedance
Click to expand...

Before you tell me "what about high frequencies"?
Well, I already see a .1uF cap in parallel.
What improvement might make adding a 1ohm resistor in series is beyond me.

Mind you, we are talking *this* , line frequency PSU ; in SMPS it's a whole different World.

As a side note, even if that PSU design "comes from TI", it might very well be the pet idea of somebody working there.
I found it strange, to say the least, their specifying the *Brand* of all components, up to specifying "Panasonic 1 ohm resistors". ¿¿¿¿??????????????

That said, TI themselves add the following statements, which match my concerns and then some:

Many of the capacitors used may not be commercially necessary or may have a minimal effect on performance.
Click to expand...

For a commercial design, bench and listening test or some other test criteria is
recommended to determine the exact number, size, and type of external components required.
Click to expand...

But this is the final "sledgehammer in the head" disclaimers:

The values for the different capacitors were not chosen based on extensive bench work or research.
Click to expand...

The equations and methods to determine optimal
values are beyond the scope of this application note.
Click to expand...

Isn't this schematic wrong? The negatives from bridges connected

all of the Carlos fm schematics on the internet
Click to expand...

Please post one of them here as an image, otherwise the one we find may not be the one that worries you.
•••

Just flip the negative rail bridge.
Every time that schematic is posted somebody comments on the fault and it has been posted many times over the last 10 years. One source is chipamp.com, it is part of the builders guide of their LM3886 kit.
•••

On reading the authentic CarlosFM supply, I see that he eq'd his amp via the power circuit, which is an excellent sport, but at the cost of making a one-off that is not generally applicable to any other amplifier. That thing is a custom tuned supply for only ONE amplifier--his.

And that other thing posted from chipamp.com is a marketing purposed made-for-selling product, which is passable and useful for power, but the only thing it does in hi-fi is the marketing. And it does its main job very well. Other than the marketing goodness, it is a very basic simple type supply on an overly large size bright red board, which probably helps for a more attractive appearance. Also, it will block radio reception at far-fringe distance, so obviously those snubbers are in the wrong place and serve only a decorative appearance at best. It does have value, but we need to be aware that it is a well decorated ordinary simple supply.

As for the claim that snubberizing makes a hi-cap supply non-dulling, that's bullsh*t. However, there exists very real and terribly easy ways to do that, such as OsTripper's smart application of fuses (plus cap loaded resistor divider at small signal areas too), AndrewT's well calculated use of cable, and my series diodes, which are ALL low loss series elements NOT entirely located on the power supply board. Snubbers simply don't do the same thing. And certainly not at the power board.


Snubbers don't substitute for series elements. They can assist series elements by loading frequencies selectively (such as making amplifiers immune to speaker cable differences), but they aren't a substitute, and so they do not work as CarlosFM claimed. If in fact it did what it said, the means to function is in making (loading) his series element more effective at hindering the target frequencies, but unfortunately, that other part is undocumented (or at least partially hidden within his cabling and/or layout for his specific amplifier). If I remember correctly, his power supply was in a separate box, in which case, his DC umbilical cable was his series element. And indeed, THAT can be loaded by a snubber. Well, that method is effective and orthodox, but can be overly laborious. I think that it was the Cable, not exactly the snubber, that allowed a hi-cap supply to be non-dulling. That in addition to a high current capable transformer, apparently enough to overwhelm that 1R at the supply.

P.S. I think that both supplies posted are an interesting read and that I will avoid using both of them, because I don't have the application for which they are suited.
Last edited: 2014-11-20 9:06 am
•••

For more information, here's my latest try at power supplies, in the presence and welcome critique of experts on the Honey Badger thread: http://www.diyaudio.com/forums/solid-state/192431-diyab-amp-honey-badger-28.html#post4095083 Feel free to adapt it to twin rectifier for your dual secondaries transformers (which I would rather have used except that the guy I was making it for happened to have a center tap).

AndrewT's method works perfectly, but I wish he wouldn't finesse the cable for it, since that method breaks my head and/or calculator. There exists easier to figure series elements than that.

It is in this area where CarlosFM failed the documentation although I'm fairly sure that his circuits did produce the output qualities claimed (just not by the means claimed). If we assume, as we should, that the output was of the quality claimed, then indeed there Must have been a series element involved. Unfortunately, the documentation for such is in short supply and not shown on the power supply schematic; and, I guess that is because the main job is on the amplifier board, not the power board.
Last edited: 2014-11-20 9:46 am
•••