NareshBrd said:
And what is allspice, I wonder....
Click to expand...

Also known as "piment de Jamaique", it is a spice that is native to the Caribbean. It is called allspice because it tastes a bit like cloves, a bit like ginger, a bit like nutmeg, etc and is said to enhance other spices. It is very good in a masala that emphasizes the sweet and aromatic spices. It is available ground and also whole dried berries.

I once asked for it in an Indian shop and they handed me panch phora.
•••
J

If you want to try allspice, here´s a dish from one of my favourite cooks that kind of features it:
Mejadra (Ottolenghi)
It is like a dry khichdi and could be from india but it is not. Don´t forget the greek yoghurt.
Damn it, now I´m hungry again!
•••

We do have quite a few Indian supermarkets and some very good regional Indian and Nepalese restaurants in Australia these days, so I have been spoiled for choice. Unfortunately there are none on the island were I live now.
•••

NareshBrd said:
Another example of local tastes and marketing influencing the product at the expense of reality.
Click to expand...

Once I learned what an authentic curry tastes like (in the '80s), I am amused when I see our old curry powder. It does nothing more that give cooking a little kick.

This is more like we would expect from an Indian restaurant today.... 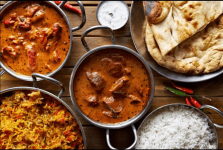 Nezbleu:
Just order on line, they are good for several months in powder form, and a year or so whole, under proper storage conditions.
Allspice is not Indian, it is probably an African immigrant, or from South America originally.
Panch Phoron is an Eastern Indian mixture, the fennel is also seen in South India. Crushed fennel seed is an occasional ingredient in Western India, and North India.
Nigella seeds are used in North Indian pickles, for example, and in the mango pickles of Punjab, poppy seeds are also occasionally added for texture, no they are not dangerous, quite a common ingredient.
Onion seeds are also part of spicy mango pickles, not so much in the sweet pickles.
I have been saying we have so many varieties of cuisine, and we also have Indians who have moved abroad, so this poor level of awareness should not be there.
It is like the customers are not really aware of what to expect, and once you do have a properly made dish, like Allen did, you come to know what it is all about.

And our sweets and pickles...just see the sites of major Indian makers.
The cake shops in your area would be shocked to see the variety we have in sweets.
Pickles? Priya alone must have more than 20 varieties, and there are others like 77 and Nilon's...and many regional brands.
There is a small town in Haryana State, famed for its Panchranga (literally five colors) pickle. More than 50 factories making it there.
And Amritsar city has a pickle market, just read up.
Tuna fish, other fish, prawns, chicken pickles? We do have them too.
•••

NareshBrd said:
Nezbleu:
Just order on line, they are good for several months in powder form, and a year or so whole, under proper storage conditions.
Click to expand...

Not necessary, I have them on my shelf. I was just telling an amusing (to me anyway) anecdote. It made a lot of sense, when I asked at the Indian grocery whether they had any whole allspice, he handed me panch phoron. (For any who are unaware, "panch" is "five", and panch phoron is a mix of 5 types of whole seeds (black mustard, cumin, fennel, fenugreek and "black cumin" which seems to mean many things depending who you ask, but most panch phoron uses nigella seeds).

I cooked a lovely dish just the other day of pork tenderloin seasoned with allspice, with caraway, onion, cabbage, and apples.


NareshBrd said:
Allspice is not Indian, it is probably an African immigrant, or from South America originally.
Click to expand...

I know it is not Indian, as I said it is native to the West Indies, hence the French name which translates as "Jamaican pepper".
•••
N

You asked for a West Indian item at an Indian shop....

I have a friend, who is an avid farmer, grows exotic organic vegetables, about hot West Indian bell peppers.
He said there is little market here in India for that, and also the supply to UK is easy from the Caribbean, and those are mainly consumed in UK by migrants from the West Indies.
Difficult to compete in UK market, and East of there, not many consumers.
Same for allspice, I think.

Try adding clove and cardamom powder to meat, and cardamom and saffron to milk based sweets, or cakes. Distinctive aroma and taste.
•••
N

I have no idea how many West Indians have settled in your part of the planet.
So I cannot say if there are supplies available of their ethnic foods and ingredients, though on line shopping has changed things a lot, you can source from far away.
Try cooking with black pepper and cardamom, about one clove is good for two diners. Black pepper, one teaspoon for four is on the high side.
•••
N

A common snack here in the evenings.
•••

Naresh, how is windaloo prepared? My favourite Indian food is chicken windaloo.
•••
N

It means pork in wine and garlic, after the method used by the Portuguese to preserve meat on long voyages.
The wine was substituted by palm date vinegar in Goa, giving it its unique taste.

https://www.google.com/url?sa=t&rct...iki/Vindaloo&usg=AOvVaw05SIOzsB8l0M0Mpsuozrim
The classic is pork, and beef is also used.
Both take much longer to cook than mutton and chicken.
Depending on your preferred meat, and locally available ingredients, choose a recipe...and add spices a lot or little, as per your preferences.

Beware, I have seen recipes that do not use vinegar at all, which makes the whole thing fake.
•••

NareshBrd said:
It means pork in wine and garlic, after the method used by the Portuguese to preserve meat on long voyages.
The wine was substituted by palm date vinegar in Goa, giving it its unique taste.
Click to expand...

Then I don't know the real thing. Vindaloo over here is an extremely hot dish. I never tasted any wine or garlic in it, just chili pepper.
•••
N

The wine spoiled and became vinegar on the long voyage from Portugal to Goa...around Africa, no Suez Canal then.
To make the sailors feel at home, vinegar was added to the local meat...

But like AllenB said, until you taste the real thing and realize what is happening, it is just something different.
And the food sellers get away with it, as the customers have no idea what to expect.

Then it becomes marketing hype, some people are bored, possibly high on substances, and decide to do something new, or exotic...

So names like vindaloo, balti (bucket) and phall (invented by Bangladeshis in UK) are used.

Balti cooking was sold as Frontier cooking from Baltistan, a tiny state with just 332,000 population, mainly of Tibetan ancestry!

Frontier cooking is from the North - West Frontier Province on the Afghan - Pakistan border, lots of roasted meat dishes, and Biryani, those people are of Central Asian ancestry for the most part.
So the food and so on are quite different from the Balti people, another instance of marketing hype which was started by the UK curry houses in an effort to seem different.

Remember Theda Bara, an anagram of 'Arab Death'?
Of course tongue in cheek names have been there, like Pussy Galore, Octopussy, and so on!

The best way to know about Indian food is to have a friend or acquaintance share their food with you, or teach you.
Recipes are available on line, the TV channel NDTV, and local news paper Times of India have a lot of details.
The regional magazines, others with an Indian audience in mind will be always more authentic than some feature writer in, for example, Australia, who wrote a vindaloo recipe without vinegar.

You then need to filter by availability of ingredients and your own skills in cooking, also what kind of utensils you have.

If you like liver, there are chicken liver curry, and beef liver curry from Goa.
There is a dish called beef fry from Kerala, soul food for people from that state.
Madurai style dry roast mutton is also considered desirable...
•••
N

Bati are dough balls, cooked in sand or ashes under a fire.
Dal is a spicy lentil soup.
Churma is roasted flour with a little sugar or jaggery (gud, molasses, reduced sugarcane or palm juice) added.
•••

In the UK our Indian restaurants use white onions in most of the curries.
When I watch cooking videos on youtube by people in India they nearly always use red onions.

Do red onions available in the UK taste different to the red onions in India ? (Do UK white onions taste more like Indian red onions) ?

I have no idea, only thing is red onions are sharper in taste than white onions. Less tears while chopping white onions.
And white onions grow in hilly areas, and the harvest seasons are different, so the people buy whatever is in season.
Red onions are grown in the plains.

The price of onions has a 10x variation between peak harvest season, and the month before harvest, when all the stocks are gone.
It has caused Governments to lose elections here!
Very big issue, the price and availability of onions!
Not pulling your leg, you can verify it.
Reactions: 1 user
•••
N