Hi,
I'm currently in the process of putting together a small high-ish-fi bedroom system, with a little 2 x 10 watt tripath based amp, ESP's DoZ Preamp, a cheap DVD player with an optical out and a cheap chinese DAC (the Pro707). As you can see, there's a few compromises to keep the cost down, but I've tried to create a component system so I can swap in better gear should I ever be able to afford it.

However, I'm also interested in analogue sources (it should be noted that I'm 17, so vinyl was unpopular by the time I was born), and as such, I've built a VSPS, and tested it with my parents rather ordinary Sony PS-LX43P turntable.

Obviously, though, I can't keep using that, so I was wondering if anyone could suggest a turntable (second hand is fine) available for ~$150 (in Australia, or including shipping here) that would provide sound at least as good as the long-in-the-tooth Sony. Budget is pretty inflexible, as a school student my income is limited.

DIY isn't really an option, I don't have the tools, skills, or time, and I doubt I could do it that cheap anyway.

So, to sum up - I'm after a turntable of merely acceptable quality that is available cheaply!
•••
D

Take a look around here . They are just across the way, shipping may not be so bad.
•••

Find an old AR-XA, fit a cheap Grado cartridge to it, and you'll be quite happy.
•••
T

Hi,
I should note that that particular Sony is a pain to use, thanks to an odd power cable, it was designed to take 12.3V from the original receiver.

I made a pick-up arm in a double period using the metal workshop when I was at school. I wired it in the evening and was listening later. You can do anything if you set your mind to it.
•••

You could keep an eye on this one and see what it goes up too.

Ask if they'll send to Aus.
I was going to buy one from Perth, and it wasn't going to set me too much to send to Auckland.
•••
T

@EC8010: My school doesn't HAVE a metals workshop, and I'm not a good person around tools. I'm the type that can get into trouble with a drill press.

@enzedone: I'd prefer not to deal with trademe, they have a stupid requirement of paying them money before you're allowed to ask sellers questions (or bid, for that matter).

Calling SY - I really do like the look of the AR-XA, but on ebay they mostly seem to be a) in the US (not insurmountable) b) frequently damaged or nonfunctional (not exactly good) and c) going for upwards of $150, and that's before I've looked at a decent cartridge. Is there anywhere I should try looking for that sort of thing?

and to anyone else: I really do prefer the look of vintage turntables, so much more attractive.....if anyone can suggest others that are often going cheap and are still commonly reliable (oh, and sound "OK" - that is, the sort of turntable a vinyl diehard would have sitting around incase the good one died, perhaps, or just the sort of turntable somebody who isn't really into analogue sources would like for those times when he'd like to pull out the old Floyd records)
•••
W

An old Technics direct drive, like an SL-D2, with a new Shure M97xe
cartridge or an Audio Technica AT-95E. 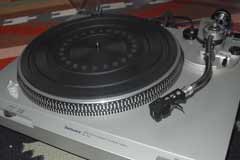 Consider some of the Japanese brands. One to look out for is Sansui. I have the SR222 MkV, which is ok. The best was the MkIV. They are very pretty belt drives with a piano black finish. Mine came in at £54 sterling off e-bay.
•••
D

How about a Pioneer PL12 D?
Popular enough in their day to have resulted in plenty still available cheaply.
Straightforward belt drive TT, with plenty of potential for easy modding (start by damping the platter), and a usable arm, which could be replaced later if you wished.
Retro looks too, I suppose ;-)
•••

Seekerr, the last two I bought were at a garage sale and a junk shop. $5 and $10, respectively. Minimal work to get them up and running (new belt, clean up bearings).
•••
T

@SY: I'll try my luck around and about, but I think they may have been rare here in Australia

@simeon_noir, dnsey: I like the look of some of the Pioneers and Sansui's I can see around. Can anyone tell me what the difference is between, say, a PL12-D and a PL15-R?
•••

A Dual 1200 series turntable with a belt drive may have good results for you. They generally need a bit of inexpensive repair, but at long as the motor and spindle are good you may find a good deal. The Dual 1229/1229Q and other idler wheel drive turntables generally need a lot of repair due to their Rube Goldberg internals and should be avoided if you want to stay under $150.

If you can find two broken turntables of the same model, you may be able to use one for parts to repair the other.
•••
S

SY said:
Seekerr, the last two I bought were at a garage sale and a junk shop. $5 and $10, respectively. Minimal work to get them up and running (new belt, clean up bearings).
Click to expand...

Only in the US. Europe and Australasia see very few of these and in good condition they fetch top prices. A completely standard Legend (The Turntable), the most numerous AR here went for £170 this last week on the 'Bay and another standard but for a Linn LVX arm went for £190. The e-mails for both indicated inquiries were made from all around the world. The ability to find these in garage sales or thrift stores is very much a luxury centred around the popularity of these American turntables in their home market.
•••
T

I'm keeping an eye on this, but I fully expect it to reach $120 or so based on what I've seen others in reasonable nick sell for just in the last few days.

Still, suggestions from people are still useful......the more different options I have, the less likely I'll go and pay too much.
•••

d to the g

So, to sum up - I'm after a turntable of merely acceptable quality that is available cheaply!
Click to expand...

If all you're going for is "merely acceptable", watch the classifieds for used dj decks. I'm sure you can find one that fits the bid.

The technics 1200 can REGULARLY be found here for ~$200 used, and I see the cheaper numarks/geminis sell for ~$100. I'd try to find a technics, as they hold their value quite well while the others seem to come and go like cheap plastic components.

It appears the craigslist has yet to catch on much in your area, here in the states it can be a great resource.
•••

SY said:
Find an old AR-XA, fit a cheap Grado cartridge to it, and you'll be quite happy.
Click to expand...


Yup. If the Grado black didn't hummmm on my Rega, it would be damn near my first choice! The cheap Grado sounds really good to me.
•••
Show hidden low quality content